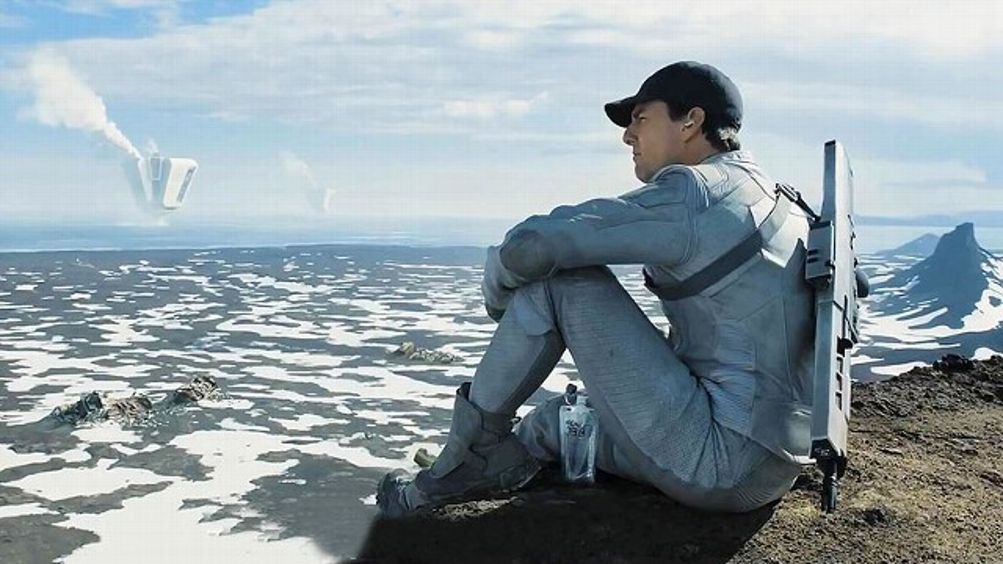 It takes more than an hour for Oblivion to become whatever it is the filmmakers think it’s supposed to be. But when that whatever arrives (and even before it does) the movie works as an experience that glorifies the megaplex ideal. I watched it in a very good IMAX theater in suburban Philadelphia that, like all IMAX theaters, had a guardrail sitting at the bottom of the screen. It seemed to be there expressly to prevent you from entering one of Tom Cruise’s pores.

Fully overwhelmed in IMAX might be the only way to watch this movie. It’s been shot with a crispness that elevates the heart rate. Projected at that scale, you want to leave your seat and explore this postnuclear Earth, to walk the film’s sands and marvel at the manner in which the geological table has been so fantastically upended that Manhattan erodes beneath dunes and decays at the base of canyons. (The year is 2073.)

Oblivion oscillates between sites that are way up high and locations that are way down low, between the astral dark of outer space and the flashlit dankness of long-abandoned caves. Even at IMAX scale it remains thrillingly impossible to detect whether the orb-like drones that accompany Jack Harper, the wistful repairman Cruise plays, have true tactility or whether they’re just projections from a hard drive. The drones perform surveillance, they’re armed to the teeth, and their resemblance to eyeballs is a clever formal manifestation of their function, which is to hunt and exterminate aliens for an ominous entity called the Tet, whose twangy operations commander, Sally, is played by a scratchy video uplink of Melissa Leo.

The orbs have a rapport with Jack that gives you that Blade Runner replicant feeling about him. They break; he fixes them. When Jack and, by extension, the orbs happen upon a tiny survivalist civilization of human rebels — they’re the “aliens,” and they’re called Scavs — the orbs descend and instigate a fantastic firefight. Tremendous care has gone into making you believe that the orbs are whizzing around, flying into beams, and machine-gunning everyone. No matter its actual provenance, this ruined and depopulated Earth often feels breathtakingly real.

But there’s too much time to realize that what Oblivion cares about most is how good it looks. The director and cowriter Joseph Kosinski is a trained architect and visual-effects designer who wrote the graphic novel that became this movie. His expertise is in vastness and scale. He knows how to fill the camera frame and can orchestrate chaos and elaborate movement so that your ability to follow it is simple and your nervous system’s response to its intensity is involuntary. His meticulousness is as painstaking as it was in Tron: Legacy, another grand optical illusion that kept confusing commercial vanity with philosophical wonder. There he made light something you want to lick and wear and put inside you. Oblivion is something you want to be inside of. Upon entry, you’d have plenty of room to notice how hollow it is.

Kosinski devotes the first hour to setting up Jack’s workaday life. He lives atop a single-unit tower on Earth and wakes up with his English assistant and maybe-girlfriend, Victoria (Andrea Riseborough) — because this is also a Tom Cruise movie, the studio is almost contractually obligated to let him do this waking shirtlessly. Jack hops into his high-tech jet craft and sets out to repair drones. He visits a cabin from his pre-apocalypse life. He’s nearly captured by mysterious forces far underground in what looks a lot like the New York Public Library. He discovers a woman (Olga Kurylenko) in NASA gear who could be his remnant wife and he is discovered by the Scavs, a race of impossibly chic renegades (so much strategically placed rubber! So many paramilitary knits!) whose leader is Morgan Freeman, an actor who’s never needed to look cool. But in a cape and a pair of steampunk sunglasses, he now looks like he’s waiting to make the Mothership Connection. The Scavs need Jack to help them strike back against the Tet, and poor Jack has no idea what to do.

There are three problems with this setup. The first is that it takes too long to get to striking back. Watching Jack and Victoria pass the time, with her communicating with Sally and him roving for drones, is not as interesting as Kosinski believes. You need soulfulness for these sorts of longueurs, not math or circuitry. The second is that the business with Mrs. Harper is confusing more than it is intriguing: The Tet has wiped Jack’s memory; but what he does remember of her and of Manhattan is generic placeholder stuff, like the photo that comes with a picture frame. This, of course, leads to the third problem: Kosinski might have heightened senses of sound and vision, but he’s got no feel for interesting people. The ominous humanness the drones achieve — along with the repeated sight of the iconic coin-ooperated viewfinder on the observation deck of the now-trashed Empire State Building — is the most interesting surprise in this movie.

This is science fiction with state-of-the-art production and sound design, smart if absurdly fashionable costumes, boundless cinematography, and, eventually, Morgan Freeman. But for all the time and care and money that went into the physical details, it’s astonishing so little ostensible attention was paid to writing an equally well-realized movie. Kosinksi is a filmmaker of the Christopher Nolan mold — a pop-art engineer. They’re both shallow and anti-psychological, but Nolan has a rippling shallowness; he can skim a rock across the surface of a puddle. He can do a lot with superficiality and genericness. Kosinski doesn’t appear to be up to anything. The use of drones that hunt in caves for people who are rumored to be aliens doesn’t have enough development to achieve the full weight of allegory. The Tet is a giant game piece that’s been designed in a way that resembles the old Viacom logo and shares a name with a Vietnamese holiday — and the deadly Vietcong military campaign that happened on that day. But it has a woman’s voice and opens and closes crypto-vaginally. But only for Cruise, which must be a metaphor for something. (The movie does some other comical flirting with misogyny, too.)

Cruise is his reliable self. His determination to give us our money’s worth might represent the most intense and intensely ridiculous professional commitment in the history of the movies. It’s hard not to love a man who loves us as much as Cruise does. He just has no chemistry with anyone else. Kurylenko is a beauty, but she brings with her a Bond-girlishness that has little to do with Cruise (she’s currently being better used opposite Ben Affleck in Terrence Malick’s To the Wonder). And in IMAX, you fear that, in the Hollywood constellation, her exoticness might be a redundancy — that she might be Catherine Zeta-Cotillard.

More important is that Cruise is not the sort of star who can keep you rapt just bobbing around ruins and being a kind of average. This might be where the Charlton Hestons and Will Smiths of the world have him beat. Going less than 15 miles an hour diminishes Cruise’s power. At this point, it no longer makes sense for him to keep making science fiction movies, anyway. He still looks naturally 30. He is science fiction.

The arrivals of Mrs. Harper and the Scavs threaten to take the movie somewhere interesting. For one thing, Victoria frigidly freaks out into a way that takes full advantage of Riseborough’s insinuating attentiveness. But then the characters begin doubling, and time seems to fold in on itself only so that the audience can go home in a state of satisfied confusion instead of scratching its head in bewildered misery. Kosinski deploys the most banal emblems. At one point, two characters stare at Andrew Wyeth’s Christina’s World — the painting in which a young woman sits at the bottom of a hillock and gazes, with her back to us, at a distant house — and one says the painting reminds her of home. What does she mean? It’s like staring at a glass of water and saying it reminds you of being wet. That kind of flatfooted cultural imagination pervades the whole movie. Jack goes to that cabin and puts on a Yankees cap, which, in some corners of the universe, might signify the opposite of humanity. Later, at the cabin, Mrs. Harper puts on a record intended to mean a lot to Jack: It’s “A Whiter Shade of Pale,” which has shown up in so many movies and commercials that it no longer means anything to us.

Oblivion is so much like and influenced by so many other movies that it doesn’t top or transcend — The Matrix, I Am Legend, Planet of the Apes, Star Wars, Aliens, Vertigo, Cloud Atlas, Inception, An Affair to Remember. Kosinski rejects the wondrous foreboding of 2001 or WALL-E. Oblivion sells the bogus upside of doom. There’s also a desert sequence that bring back sleepy memories of last year’s John Carter and how this could have been Jack Harper, but Kosinski really does have a talent for hypnotizing you with production. This is what John Carter could have been, and yet Oblivion could have been so much more. Kosinski doesn’t build a new world. He’s just reupholstered a bunch of old ones.