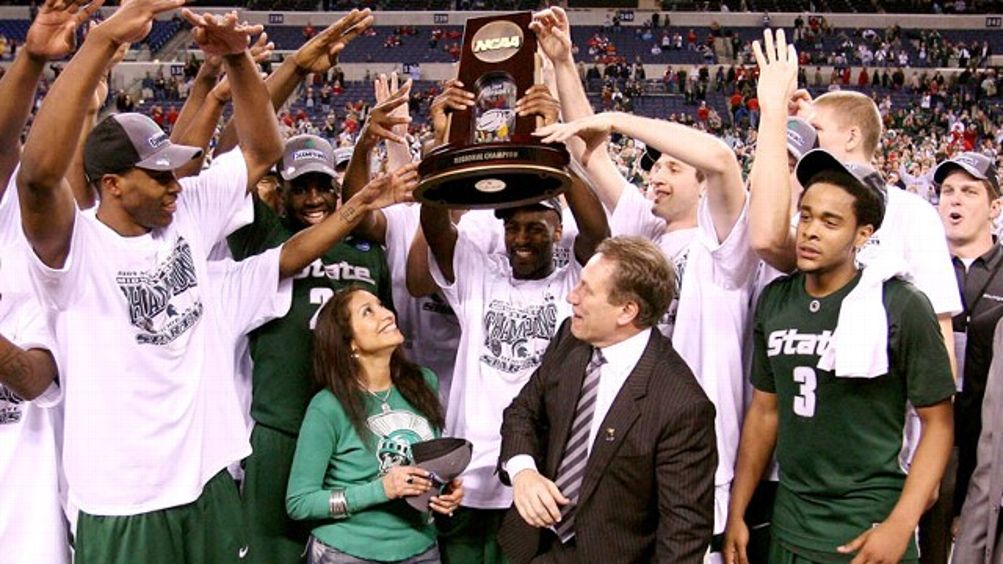 Grantland’s Davy Rothbart recently sat down with Michigan State University first lady of basketball Lupe Izzo. Izzo’s husband, Tom, is the head coach of the MSU Spartans, the no. 1 seed in the West region of the NCAA tournament. For more with Izzo, visit Grantland.com.

In 2009, Tom Izzo led 5th-seeded Michigan State to the Final Four, and in 2008 they made it to the championship game before getting crushed by North Carolina. How do you and Tom cope after a big loss?

It’s really hard. He’s still upset about losing the [regular-season finale] against Ohio State. He takes it so personally. If he feels a player didn’t play up to his expectations or if the calls weren’t exactly fair, it bothers him so much. The good thing about the regular season is that there’s a next game; you can’t wallow in it. But when you lose in the NCAAs, you’ve got a stretch of time ahead of you and you carry it a bit longer. What really comforts Tom and brings him a smile is when he’s around his kids. My daughter can walk into a room and he’s forgotten everything. After a tough loss, that’s the only thing that seems to help.

Tom prides himself on the close-knit family atmosphere of the Michigan State basketball program. Can you talk about the relationship you guys have with his players?

Absolutely. I get to know a lot of them at a young age, when they’re juniors or seniors in high school. I get to know their families — grandparents, uncles, and aunts. And we get incredibly close during their years on the team. When our seniors graduate and leave us, it’s really hard. But they always come back, and those return visits are the most special. In fact, sometimes I’ll even get to know the players better once they’ve graduated. When they’re here in school, they’re student-athletes, rushing between classes and practice, running home on semester breaks. But when they come back, we have more relaxed time together. We host reunions once a year during football season and once a year during basketball season. This year we invited the past players from previous head coaches to join us, and we even had players from the 1950s come back and share stories with everyone. Our basketball family just gets bigger every year.

A lot of people only know Tom as a coach. What’s one special quality of his that others don’t get to see?

Tom loves his children very, very much. He tries extraordinarily hard to spend as much time with them as possible. Whenever he possibly can, he goes to see their games, whether it’s soccer or basketball. He really goes over and beyond trying to get to our kids’ activities, even when it’s really, really hard for him to make it happen. People are kind of amazed that he’s running out of one of his practices just to go and see a sixth-grader’s soccer game and then come back to the office.