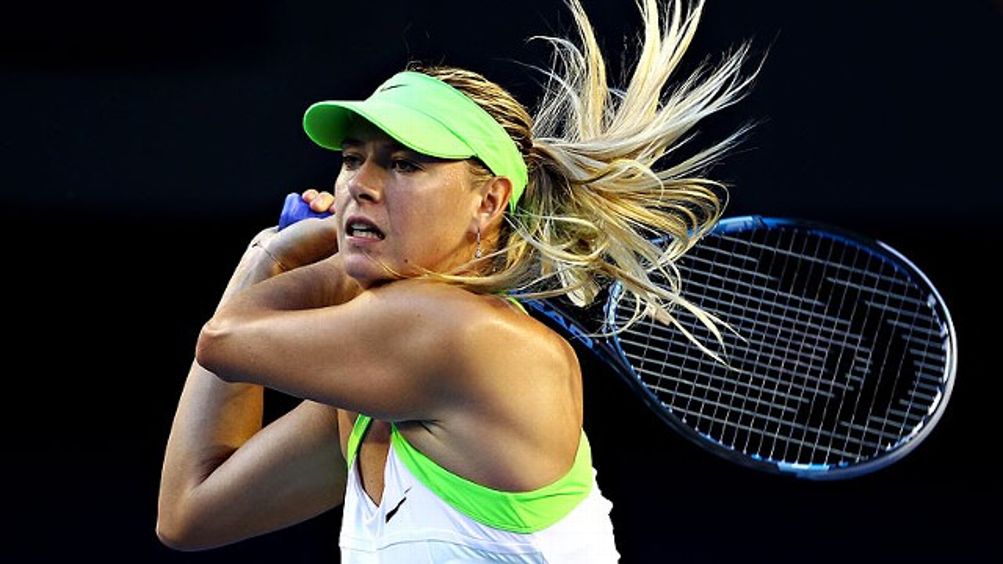 One of my many bad habits is my profligate use of “winner” and “loser.” Technically the two winners of the 2012 Australian Open were Novak Djokovic and Viktoria Azarenka, and the losers were everyone else. But to call Rafa Nadal a loser seems like a grave injustice after his six-hour 5-7, 6-4, 6-2, 6-7 (5-7), 7-5 loss to Djokovic. On the other hand, by the time the men’s final was over, Azarenka’s win seemed almost irrelevant, like it happened in a satellite tournament weeks ago. Unbelievably, so did the semifinal that Andy Murray barely lost to Djokovic, not to mention Nadal vs. Federer round 958. The men’s final was just obliterating.

I have a feeling, though, that after sleeping for 20 hours to recover from Djokovic and Nadal, I’ll be thinking about two players who lost: Sharapova and Murray. It’s always seemed safe to say that Sharapova is a winner and Murray is not. If someone had asked me for evidence, I would have pointed out that Sharapova has won three grand slams and Murray has won none. I also probably would have been annoyed at the question. Isn’t it obvious? I guess it does seem obvious, because no one has ever asked me to back it up.

That was a good thing, because my defense was lame. Both players came into the Australian Open ranked no. 4 in the world. Murray’s 2011 season was actually terrific (finalist at the Australian Open; semifinalist at the French Open, Wimbledon, and the U.S. Open; five titles) and Sharapova’s was just OK (finalist at Wimbledon; semifinalist at the French; two titles). Sharapova hasn’t won a Grand Slam in four years, and not since a shoulder injury nearly ended her career. She loses all the time. The only thing that was really obvious was that Maria Sharapova looked like a winner, while Andy Murray struck a startling resemblance to Wile E. Coyote.

Going into the final few rounds of the Australian Open, you had to feel bad for the guy, the same way you pity the hapless coyote. It’s not Murray’s fault that it’s an unlucky time to be a professional tennis player. Not his fault that every time he hit the final four he had to face one of the greatest players in the history of the game, guys for whom cartoon physics apply. While his opponents can sprint through painted tunnels, he smashes into rock. Every time. And yet, for the past few years, it’s been hard to shake the sense that despite the greatness around him, Andy Murray should also shoulder some of the blame for being Andy Murray. People used to talk about the top four guys; then it became the big three. Andy was the odd kid out. He had the skills, the backhand, and the return, but not the drive, the forehand, or the head — or something. You just knew that eventually he was going to lose.

Contrast Murray with Sharapova. She screams victory. All the talk of grunting is getting boring, but it’s unavoidable because it’s so damn loud. If your eardrums aren’t blown by the effort, try listening to Sharapova hit a shot. The sound is asymptotic, moving through the high registers before moving into a ragged rumble that extends on and on, like she’s a train coming through. It is nasty. But — if you can ignore how annoying it is, for the other players as well as the fans — there’s something beautiful about it. It’s a reminder that despite all the photo shoots Sharapova does, despite the legginess of her stride and the immaculate tailoring of her specially designed tennis dresses, she’s willing to look ugly when she plays.

Sharapova begins points with explosive shots and huge, flat ground strokes, but she does not play a pretty game. She doesn’t move well, she doesn’t have great hands, she doesn’t take your breath away. There’s nothing of the beautiful quality of the top men’s players — or of many of the women, for that matter. When she’s behind and determined to overwhelm her opponent, she looks and plays like she’s stepped out of the other player’s nightmare. She seems to lift her game to heights where she has no right to reside, not because she’s in some kind of zone but because sometimes that’s what it takes: You have to play better than you are. When I watch her, I sort of believe she’d maim herself to win. She was a beast in her semifinal victory against Petra Kvitova. Kvitova was the 2-seed and the consensus favorite, the Wimbledon champion with big ground strokes and a complete game. There’s no question that the quality of Kvitova’s game, when she’s playing her best, is better than Sharapova’s. Maria, for her part, served 10 double-faults in the match. After being down 0-30 at 4-4 in the third, she broke Kvitova in the last game. Kvitova was clearly rattled by what was going on, hitting errors and even bouncing her racket. It was like she knew what you knew: Sharapova was not going to lose.

It seemed like things could be different this year for Murray. He won three titles in a row last fall and his first of the year, in Brisbane. Even more meaningfully, he brought on Ivan Lendl as a coach. Lendl presumably knew what it was like to be an also-ran (Murray has lost the final of three majors; Lendl lost four before going on to win eight). And you had to think it would help to look up into your box and see one of the all-time great players watching you and expecting you to perform to his standards — instead of his old coach … who was his mom. The move seemed to be working well. Murray, who had more of a counterpunching game in the past, was playing a more aggressive style, taking greater risks with his forehand especially. He rolled through the quarters, and right into the Rock of Djokovic.

Djokovic was coming off two bruising, exhausting wins. He was having trouble with his breathing, had hurt his thigh in his match against David Ferrer (at least temporarily), and for most of the first three sets against Murray he looked vulnerable. At times it seemed like he could hardly walk. Even though by now you’ve got to assume that when Djokovic is hobbling between points it means he’s going to start flying as soon as the ball goes into play, Murray should have been in as good of shape as he could have ever expected.

But Murray was Murraying. He had to fight off two break points in his first service game and then was broken in his second. He didn’t start out the next set any better. He was getting angry with himself, scowling, hitting pat little second serves, blowing his allotted challenges, setting off the dynamite in his hands. But he also showed he had gotten tougher. He stepped in, started ripping it, ended rallies with authority. He won the second set — and the brutally long third, in a tiebreak. The rallies were long and hard and all over the place, as neither player could take control of the point with his serve. Murray wasn’t always playing his best — but the exciting thing to see was that he was still playing. He wasn’t going away — at least, until he was blitzed by Djokovic in the fourth, and you started to wonder if the old Murray was taking over. Djokovic pulled ahead in the fifth and was serving for the match, and I was ready to applaud Murray for his effort and then feel sorry for him. Road Runner strikes again.

But what do I know? Murray stopped losing. He broke Djokovic. At 5-5 he had a chance to break Djokovic again and serve for the match. He kept hitting with pace and a plan, going deep and for the lines. In the end, after nearly five hours of play, Djokovic won the fifth 7-5, and Murray was broken at the last. But it didn’t look like he choked, it didn’t look like he lost. In fact I had thought he would win! Except that that means I somehow momentarily, very briefly, for a split second forgot he was playing Djokovic. Andy Murray seemed like a winner. He just didn’t seem like Djokovic.

It’s probably irresponsible to turn a verifiable statement (the ball was in; she won the match) into an untestable claim about what it means to be a winner and a loser, but I think it’s also what makes the game a game and not simply a set of outcomes. The peculiarities of the sport — the psychological wear, the fatigue, the intense pressure — turn every match into a chance to evaluate and reevaluate what those words mean. So the loser Murray turned out to be a winner. The next day, the winner Sharapova turned out to be a loser. Sharapova was facing Azarenka with not only the title but the top ranking on the line. Azarenka has always been known as a talented player, and her consistent ability to move into the late rounds of majors was impressive, especially considering the usual up-and-down results in women’s tennis. But she had never played in the final of a major, and she was, as she acknowledged out loud this week, something of a head case — liable to choke when a big victory was close. After a strong first set against Kim Clijsters in the semis, she lost the second set 6-1 before pulling herself together in the third. She was broken right away to start the match against Sharapova. She looked like meat for the lioness.

Azarenka, like Sharapova, has a reputation of being something of a one-dimensional baseline bomber. It’s not true. She came into net, hit some nice lobs, and kept her balls deep. She played first-strike tennis, but she also showed some patience where Maria didn’t. She was fast, much quicker on the court than her opponent. And it wasn’t long before you could actually see her calm down. Her dimpled cheeks relaxed. You could tell by the way she played that at some point, either consciously or not, it occurred to her that she was the better player — and that mattered! Maria, for her part, seemed to sense it, too. Later she would say that she felt something go off. She lost the second set 6-0.

You could chalk it up to a bad day for Sharapova and a good day for Azarenka — and it was both of those things. But it was also something else. As the end of the match drew close, Sharapova’s face became more blank, as if she were withdrawing. When it was all over, during the ceremony, she looked like she wanted to disappear. The glamorous Russian, who has made a career out of calling attention to herself, hid her face in the shade of her terrifyingly fluorescent visor. She looked, for once, like she knew she had lost, and had known she would lose. Her speech as she accepted her prize was brief but heartfelt and moving. It turns out that Sharapova is a very gracious loser.

Filed Under: How to, Music, Rap, Series