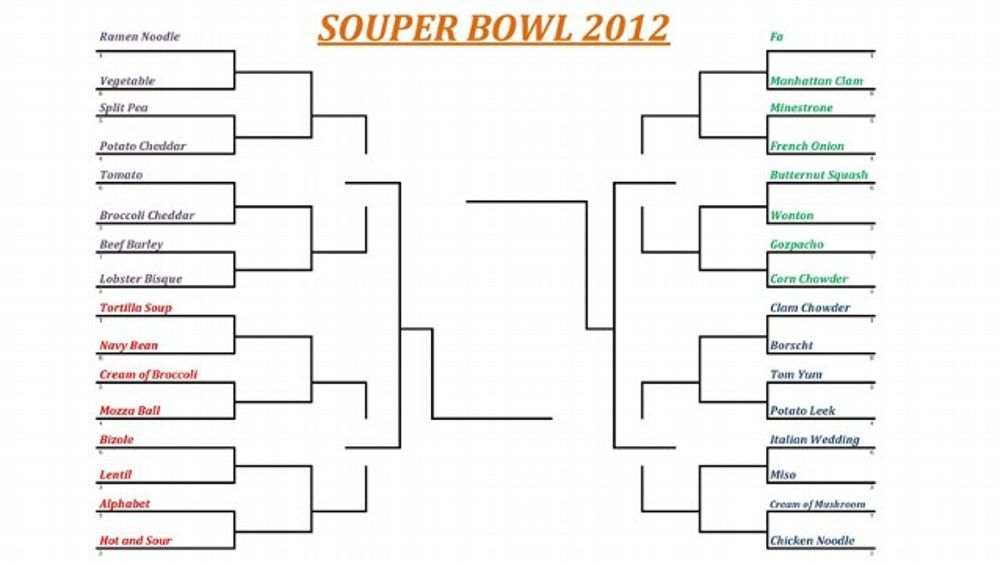 It’s this simple: Nothing of value happens in the two weeks between the conference championships and the Super Bowl. Soup is delicious, contentious, ubiquitous. Take those facts, combine them with an office full of people exhausted from arguing about which of Tom Brady’s hairstyles is their favorite — we told you nothing of value happens, also, it’s the Pretty Boy Riggins of late ’10, no question — and suddenly you have a punchy mob yelling out the names of soups, a podcast czar attempting to transcribe them phonetically on a whiteboard, and an improvised rating system only mildly less chaotic and intense than the betting before a back-alley cockfight in Phnom Penh.

And thus was born the Grantland Souper Bowl. Combining the best aspects of the Big Game, tournament bracketology, and a near-fatal gut-stabbing in a Souplantation bathroom, the GSB will bring you a solid week of chowder-splattered blood sport.

Editor’s note: We realize some of the soups are misspelled. When we created the Big Board of soups, these were the spellings provided by Reality Czar David Jacoby. We wanted to keep the integrity of his creative vision.

Vote for your favorite soups via our Facebook page.

Filed Under: College Sports, Grantland, The U