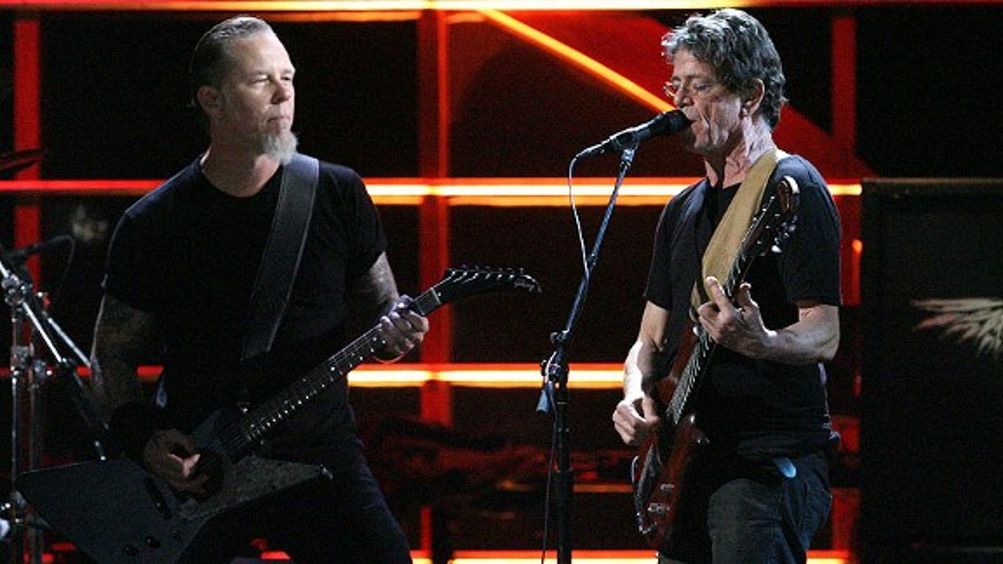 The universe is predisposed to hate this new Lou Reed/Metallica album, Lulu, and I totally understand why. It’s not really designed for people who like music. It sounds like what it is: an elderly misanthrope reciting paradoxical aphorisms over a collection of repetitive, adrenalized sludge licks. Anyone who tries to suggest it’s surprising in any way needs to reexamine his or her propensity for being surprised. I’m sure there will be a sector of Metallica’s core audience that feels “betrayed,” mostly because Metallica fans enjoy the sensation of betrayal.1 I suppose a handful of Lou Reed obsessives will consider this record hilarious as long as they don’t have to listen to it, and I’m certain some contrarian rock critic will become Internet Famous for insisting it’s more subversive than Transformer and a musical reaction to both Occupy Wall Street and the subpar drum production on St. Anger. It will be legally purchased by the 13,404 Metallica completists who saw Some Kind of Monster on opening weekend, unless the album is exclusively sold at Walmart, in which case it will enter the Billboard charts at no. 2. Rolling Stone will give it 2½ stars and then pretend it never happened; meanwhile, people who thought The “Priest” They Called Him was a brilliant idea will hold a vague, misplaced grudge against Dave Mustaine while sleepwalking to the methadone clinic.

It is not a successful record.

It might be a successful simulation of how it feels to develop schizophrenia while suffering from a migraine, although slightly less melodic.

Yet there’s still something vital about Lulu that needs to be remembered, even as you rip it off MediaFire and immediately forget the name of every single track: This was the dream. If considered in a vacuum, this absurd collaboration that no one wants to take seriously (or even play more than once) is the ultimate manifestation of what was once viewed as the idealized, unattainable goal of mainstream art. Just by existing, Lulu represents at least four things:

If you think about Lulu within those specific parameters, it seems admirable. It almost feels important. But those thoughts are annihilated by the inevitable experience of actually hearing it. If these cagey tunesmiths had consciously tried to make a record this simultaneously dull and comedic, they’d never have succeeded; the closest artistic equivalent would be what might have happened if Vincent Gallo had been a script consultant for The Room. To be fair, the end of the album does have one song that’s mildly OK — a dreamy, unaggressive, 20-minute exploration titled “Junior Dad” that will probably resonate with Damien Echols. There’s also a track called “The View” that’s pretty mind-expanding if you pretend the lyrics are literally about watching The View. But the rest of Lulu is as appalling as logic demands. If the Red Hot Chili Peppers acoustically covered the 12 worst Primus songs for Starbucks, it would still be (slightly) better than this. “Loutallica” makes SuperHeavy seem like Big Star. But this is what happens in a free society. Enjoy your freedom, slaves.

As a rule, we’re always supposed to applaud the collapse of the record industry. We are supposed to feel good about the democratization of music and the limitless palette upon which artists can now operate. But that collapse is why Lulu exists. If we still lived in the radio prison of 1992, do you think Metallica would purposefully release an album that no one wants? No way. Cliff Burnstein from Q Prime Management would listen to their various ideas, stroke his white beard, and deliver the following 45-second pep talk: “OK, great. Love these concepts. Your allusion to Basquiat’s middle period was very apt, Lars. Incisive! But here’s our situation. If you guys spend two months writing superfast Diamond Head songs about nuclear winter and shape-shifting, we can earn $752 million in 18 months, plus merchandizing. That’s option A. The alternative is that you can make a ponderous, quasi-ironic art record about ‘the lexicon of hate’ that will outrage the Village Voice and mildly impress Laurie Anderson. Your call.” Ten minutes later, Bob Rock would be parking his Lexus at the studio. Which is not to say that musicians should reflexively adhere to the static desires of their fan base, because that’s bad, too; on a personal level, I’m glad Metallica and Reed2 tried this, if only because I’m always a fan of bad ideas. They’ve earned the right to overreach. But if the fundamental goal of Metallica is to make good music, it seems like trying to get rich while doing so dramatically improves their creative process. The constraints of late capitalism really work for them; they’re extraordinarily adept at making electrifying heavy rock that’s designed to generate revenue. The reason Lulu is so terrible is because the people making this music clearly don’t care if anyone else enjoys it. Now, here again — if viewed in a vacuum — that sentiment is admirable and important. But we don’t live in a vacuum. We live on Earth. And that means we have to accept the real-life consequences of a culture in which recorded music no longer has monetary value, and one of those consequences is Lulu.

When I awoke yesterday morning, I immediately read a few online stories (including one on this very website) attempting to debunk the “myth” of Tim Tebow’s win over the Miami Dolphins. The alleged “myth” is that everyone erroneously believes that Tebow is a great pro quarterback. In truth, this notion is neither myth nor reality — no one who follows football thinks Tebow is anything other than who he is. There are people who love his ability to succeed despite his mechanical problems, and there are those who adore him as a symbol, and there are those who think it’s exciting that someone can win NFL games in nontraditional ways, and there are others who dislike him because he’s the highest-profile Christian in a Christocentric landscape, and there are many who are sick of hearing his name 200 times a day, and there are a few who believe criticizing Tebow somehow makes them more sophisticated. But you simply don’t find intelligent people who are confused about his actual ability, if only because those qualities are discussed and analyzed endlessly. The only myth about Tim Tebow is that the public is somehow ill-informed about his strengths and weaknesses; it’s a myth that exists only so that critics can point out how it isn’t valid. And this type of straw man construction happens all the time. For much of my life, I lived under the myth that record labels were inherently evil. I was ceaselessly reminded that corporate forces stopped artists from doing what they truly desired; they pushed musicians toward predictable four-minute radio singles and frowned upon innovation, and they avariciously tried to turn art into a soulless commodity that MTV could sell to the lowest common denominator. And that did happen, sometimes. But some artists need that, or they end up making albums like this.