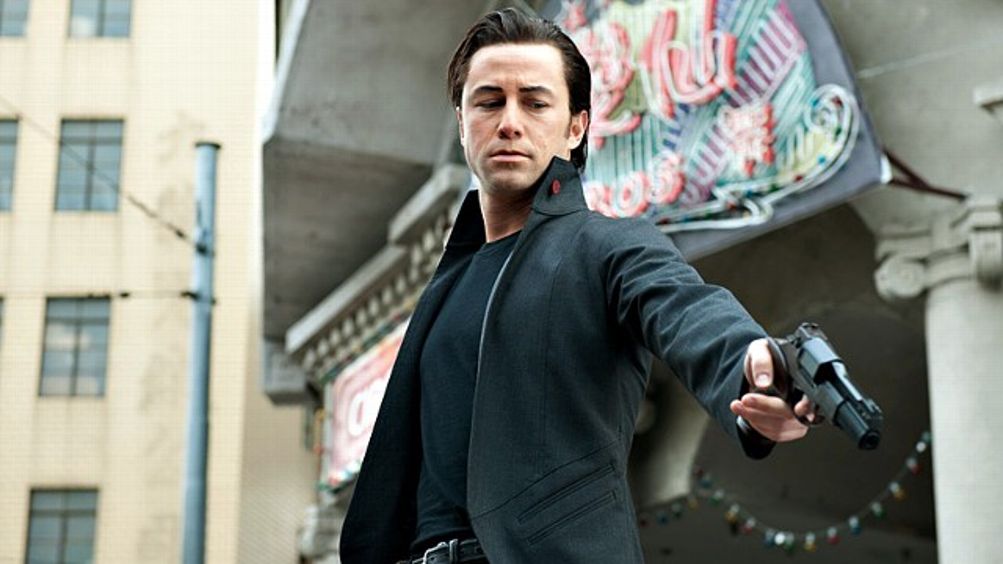 This past weekend, Joseph Gordon-Levitt landed on Saturday Night Live, where he hosted by way of promoting Looper, the third of four movies he stars in this year. (The others are, in order: The Dark Knight Rises, Premium Rush, and, next up, Lincoln.) His opening monologue on the show wasn’t really a monologue at all, but a re-creation of Channing Tatum’s immortal hummingbird-pelvis routine in Magic Mike, which Gordon-Levitt — a lifelong showbiz kid going all the way back to his sitcom days on 3rd Rock From the Sun — nailed, surprising no one; he’s game and he’s talented and he’s been asked to do much more humiliating things onstage than ripping the chord on a confetti cannon mounted on his groin. It wasn’t exactly erotic: Whereas Tatum’s dance of sin elicited audible gasps in the screening room where I first saw it, Gordon-Levitt’s earned laughs, which is the idea, it being SNL and all. Still, the comparison felt unflattering: Tatum, thick-tongued column of tan flesh that he is, has combined his exceedingly modest skills into the most convincing new-leading-man case we’ve seen all year; Gordon-Levitt, meanwhile, seems doomed to a lifetime of precisely gauged and executed performances that leave you with everything but that audible, involuntary gasp.

In Looper, he plays a younger version of Bruce Willis, and he’s getting sterling reviews for his portrayal of a young version of an old hit man in the film; the movie is currently hovering around a 92 percent positive rating on Rotten Tomatoes — and is doing even better on the far more trustworthy Top Critics page — so you know people like it. I liked it, too, but in the same way I like, but don’t love, Gordon-Levitt as an actor — there is, somehow, something missing. Rian Johnson, who directed the film, is as fascinating a filmmaker as any working today. He’s obviously smart in the way that many people in Hollywood are not obviously smart: His movies — Brick, which also starred Gordon-Levitt; The Brothers Bloom, a coy version of an Ocean’s 11–style caper film; and now Looper — tend to be about other movies as much as they are about whatever the script says they are about: underage noir antiheroes and twee, Dostoyevsky-quoting grifters and now hit men who lurk in the present day, killing time-traveling victims
from the future. In each of Johnson’s films, the fundamental drama tends not to be who will live and who will die but whose version of events will ultimately stand. Writers tend to recognize our own, and Johnson is clearly one of us: All three of his movies are about stories, how they’re told, and who gets to tell them.

So I feel lousy and even a bit disloyal saying that to me Johnson’s films suffer the same problem that the lead actor in two out of three of them does — they are intelligent and meticulously judged and admirable without being particularly engaging. There is a kind of alchemy in really good art that emerges from that zone of ambiguity between intention and result, that gap between what’s on the page and what appears in the finished product, the foggy remainder that not even the creator of the thing can explain.1 (The Master, for instance, is all foggy remainder.) Johnson’s films, which are carefully written and then executed exactly to spec, don’t have that. They’re all clever and no magic.

There are not a lot of mid-budget action films being made right now, and even fewer that reference Raymond Chandler, The Terminator, Chris Marker, Die Hard With a Vengeance, T.S. Eliot’s “Four Quartets,” and Casablanca in the same 118 minutes, so let’s stipulate that Looper is a gift to audiences who are rarely given movies that bristle with this much obvious intelligence and creative glee. You have to go back almost a year to find anything even remotely like it. It was last September that Nicolas Winding Refn’s Drive came out, and that movie feels like this one’s closest antecedent. Both films feature cult-favorite directors making their move toward larger audiences. Both feature promising young stars with show business childhoods — with Drive, it was Ryan Gosling, he of the Mickey Mouse Club — assuming leading-man roles. And both films double as homages to all sorts of ghosts of cinema past: In addition to the aforementioned stuff, Looper riffs on Twelve Monkeys, Blade Runner, and Witness; Drive, for its part, was a close update of Walter Hill’s The Driver, with a bunch of Michael Mann and John Hughes thrown in for good measure.

Not that you needed to catch the references. Drive swiftly became a critics’ favorite, one of those movies that became the default recommendation when it came to what to go see last fall. The movie was made from a slim, 80-page script and basically imagined Los Angeles as some innocent, not quite real town where gauzy pop music played and ’80s-era B movie gangsters hung out in pizza joints — it was like Refn, who is Danish and doesn’t have a driver’s license, put together his own version of America that consisted entirely of various movies he had seen set there. At the center of Drive was a deeply enigmatic, almost blank performance by Gosling — the character didn’t even have a name, and Gosling, playing him, seemed to latch onto that; his portrayal of an improbably romantic getaway driver was located in all the lonely pockets of this guy’s life that we, the audience, couldn’t access. Point being: Drive was as underdetermined and open to interpretation as a movie gets, while Looper, as is typical for Johnson, is pretty much the opposite.

The film takes place in a near-future Kansas that looks a lot like the present day, except worse — there are tent cities on urban streets, genetic mutants whose only superpower is gently levitating small objects (“a bunch of assholes think they’re blowing your mind floating quarters,” Gordon-Levitt sneers), and large criminal gangs from the even more distant future that send their enemies back in time for execution, so that their bodies will never be found. Loopers, of which Gordon-Levitt’s Joe is one, are the crime syndicates’ contract killers — they are called loopers because one day, the victim that appears before them for execution will be their own future self; pulling the trigger is known as closing the loop, at which point you get a big payoff and 30 years of retirement-style hedonism before being sent back in time to die at your own younger hands. In Looper, Bruce Willis plays an aged Gordon-Levitt (though the makeup quotient is more like vice versa); when the younger man fails to kill the older one — “This is called letting your loop run. It’s not a good thing,” Gordon-Levitt says, in a Philip Marlowe–style voice-over — the chase between the two is on.

The first 25 minutes of the movie are a delight, all cabarets and assassins toasting to their own deaths and taking future-drugs straight to the eyeballs. Jeff Daniels plays a sleepy crime lord sent back from the future to keep an eye on the present-day loopers; “The movies that you’re dressing like are just copying other movies,” he tells Joe, who does indeed dress like he’s auditioning for a part in a Godard film — as always, Johnson is letting us know that he knows where the influences and the seams are here. Ditto Willis’s speech to Gordon-Levitt when the two men meet in a diner: “I don’t want to talk about time travel shit. Because if we talk about time travel shit then we’re gonna be here all day, drawing diagrams with straws.”

But Looper, in the way of Johnson’s other movies, is really about two guys having an argument over whose version of the life they share will prevail. “Thirty years from now is yesterday,” Willis tells Gordon-Levitt, which is to say that the younger man has the power to rewrite the older man’s memories, just by doing things differently this time around. Willis, we learn, is trying to live a little longer in order to find and terminate the now-small child who will grow up to kill his future wife; Gordon-Levitt has the power to edit that wife right out of existence merely by choosing another woman — Emily Blunt, who appears in the second half of the film, is an enticing possibility — or no woman at all. As the Bridges character says: “This time travel shit fries your brain like an egg.”

Anyone who has seen The Brothers Bloom, Johnson’s 2009 film about a grifter in search of an “unwritten life,” will be familiar with the concerns here. In that film, Johnson used the metaphor of the confidence scam — which is, after all, just an elaborate story designed for the express purposes of manipulating its intended audience — to address the problem of living in general: What story are we acting out day-to-day? And is it really our own, or was it perhaps originally written by someone else? Brick, Johnson’s debut, grappled with the same questions. That movie, a classic noir film transposed to a faintly contemporary high school, was about how the wrong version of events, told convincingly enough, could be fatal; it also laid bare the fact that the traditional private eye is basically a guy who hears the lie in the recounting and goes in search of a more complete version of the story.

It’s all tremendous nerd fun — Johnson has a way of giving you the whole range of pleasures from whatever genre he’s working in (femmes fatales, elaborate heists, hard-boiled dialog) while also simultaneously interrogating it, which is pretty much heaven. And he’s respectful enough of the forms he employs that he never fails to do new things with them — the image of a startled Willis watching a message from his younger self appear in scar tissue on his arm will stay with me for a while, and without giving too much more away about the new film, the resolution at the end pulls off the neat trick of feeling both sort of inevitable and completely unexpected.

So I’m trying to figure out why Looper, and, to a lesser extent, Johnson’s other two films (I will confess to being a sucker for the love story in The Brothers Bloom), don’t fully connect for me — how I can sit here and appreciate their merits from afar while failing to be entranced by the experience of actually watching them. The best way I can explain it is probably this: There is something self-defeating about Johnson’s level of control. His films are elaborate jewel boxes in which all the gears show — in Looper, we get explicit nods to Johnson’s influences (Gordon-Levitt’s character arc is basically the same as Rick’s from Casablanca, Johnson told the New York Times Magazine, so there is a bar in the film called La Belle Aurore) and plenty of winks directed toward us, the audience, as various characters basically turn in the direction of the camera and say: Time travel! It’s complicated and even we, the time travelers, don’t fully understand it! This is all smart and postmodern and thrilling, but at the same time, Looper is never more than smart and postmodern and thrilling — there’s no moment of transport, no unself-conscious moment of release. It’s like Johnson knows everything about stories except how to simply go ahead and tell one.