No Left Tackle Left Behind 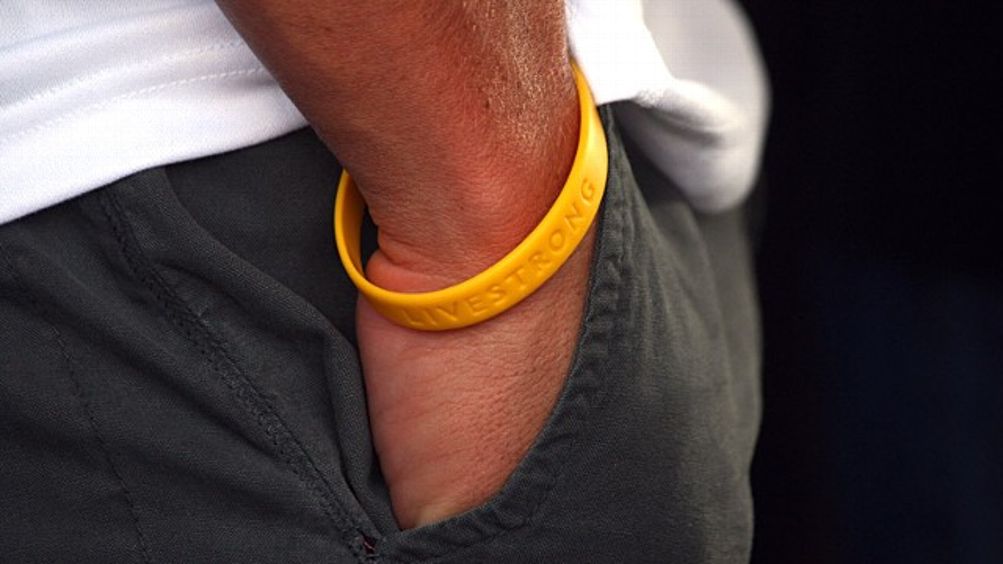 For anyone inclined to see things this way, it was simple. Beginning in 2004, you paid a dollar. The dollar went to cancer research. The research would get that much closer to a cure. The simplicity extended to the design: a band of yellow silicone engraved with the word “LIVESTRONG.” Actors, athletes, news anchors, presidential candidates, models: They wore one. Eventually, your mother, your brother, your coach, your executive assistant, your subway seatmate, your date last Saturday night, the asshole who just gave you the finger on the 101: They were wearing one, too. Some people wore three, some four, some an entire 10-pack.

There could be no overkill with the Livestrong wristband because it was going to kill cancer. The statement it made was more social than fashionable, more an emblem of defiance and hope than one of cool. It could look like a hospital bracelet and a nightclub-reentry band. It could compromise the most thoughtful outfit. That yellow might go with a Dole fruit basket. (It’s light-years better than the Lucky Charms pink associated with breast-cancer awareness — to say nothing of what that pink does to NFL uniforms and baseball bats.)

It was designed for function — not accidentally, it’s virtually indestructible. It looks best on people dressed for sport. Worn with a suit, say, it makes you look like you’d rather break away from the peloton than meet with another client. But everyone who wore one had a reason. So it was personal and impervious to criticism. Send the fashion police after someone else.

These are the simple things. But controversy always lurked.

The bracelet’s provenance is the Lance Armstrong Foundation. Before he was diagnosed in 1996 with Stage 3 testicular cancer, Armstrong was a formidable professional cyclist. The cancer spread to his brain, lungs, and abdomen. After undergoing surgery and aggressive chemotherapy, he returned to racing, two years later, cancer-free, and became a legend. He won the Tour de France seven times, which, for any athlete, would be extraordinary. For a man who almost died, it’s superhuman.

But one by one, cyclists around Armstrong charged that he used performance-enhancing drugs. He denied it, but it made sense to speculate about how on Earth a mere man with Stage 3 cancer won the Tour de France seven times in one decade. Aside from some suspiciously overlooked positive urine samples, there was no physical proof that Armstrong doped. But other riders in the sport failed drug tests, cried witch hunt, then succumbed. And people talked. About the purity of cycling. About Armstrong. The United States Anti-Doping Agency charged Armstrong and his racing teams with systemic doping. For years, Armstrong cried witch hunt, too. And then Thursday, just like that, he announced he’d stop fighting the charges without really conceding any wrongdoing. But the agency — USADA — took Armstrong’s relenting as an admission of guilt. The extraordinary seven titles? Good-bye to all of those.

Yet, none of the speculation about Armstrong’s enhanced performances seemed to limit the ubiquity of the wristbands. Or the yellow T-shirts, pullovers, sneakers, training capris, or any of the 77 products currently for sale at Nike.com (Livestrong apparel comes emblazoned, discreetly, with a swoosh). The banner at the top of the Livestrong page is pretty stirring. Armstrong stands flanked by, among others, Lamar Odom, the sprinter Sanya Richards-Ross, and the hockey player P.K. Subban. They’re each holding a flag that features two lightning bolts and says, “Yellow is my advantage.”

You see them and just assume that, right now, Joss Whedon is finishing the screenplay. That image and the entire Livestrong phenomenon get at the paradox Armstrong has come to represent. In one hour yesterday, I noticed at least a half-dozen people with a wristband or shirt. It’s possible they missed Thursday and Friday’s news. It’s likely they just didn’t care. Cycling hasn’t captured our athletic fascination. It’s a team sport that doesn’t look like one. With the Tour de France, the American coverage tends to focus on the crashes and who won which stages, and those — the stages — are confusing for some people: You mean, for instance, you can win a stage and not win the whole thing? I’m going back to baseball.

This is to say that Armstrong is more famous for beating cancer than he is for cycling. In the public imagination, the lengths he’s alleged to have gone to in order to both gain an advantage and outsmart the drug tests don’t compare to the ones he went to in order to beat cancer. Armstrong means something entirely different to the general public. The bracelets and the shoes and the clothes will continue to symbolize just the opposite of his tarnished cycling legacy. With cancer, there’s no such thing as cheating. Armstrong has positioned the foundation so that he isn’t the face of Livestrong. We are.

So it gets simple again.

A couple of weeks ago, my mother was diagnosed with lung cancer, and there were moments when she, my sister, and I were strategizing a course of treatment with the doctors, and I stood there thinking, Why don’t you just give her what Lance Armstrong had? Armstrong must drive the world’s oncologists crazy: His success has helped astronomically raise patients’ expectations. The thing about Armstrong, though, is that he’s probably in the top 1 percent of cancer patients. His fight probably isn’t like anyone else’s. Nor is the nature of his fame. If LeBron James, Serena Williams, or Derek Jeter were ever proven to have used drugs to win, they’d be notorious. If Michael Jordan were discovered to have doped at his apex, I think we’d have a more compromised relationship to his sneakers. This is partially a matter of Armstrong’s continuing to insist he’s innocent. Right now, he’s only bureaucratically guilty. An official “I did it” might change everything.

In the meantime, it probably won’t matter what the gossips or USADA throw at him. Neither will the fact that it looks suspicious for a man who never stops fighting to stop fighting this. But Armstrong appears to have no rearview mirror. He’s been banned for life from competitive cycling, but there he was in Aspen finishing second in a mountain bike race, wearing a snug half-zip shirt with a cyber print. The message appeared to be that he’ll live. Strong.