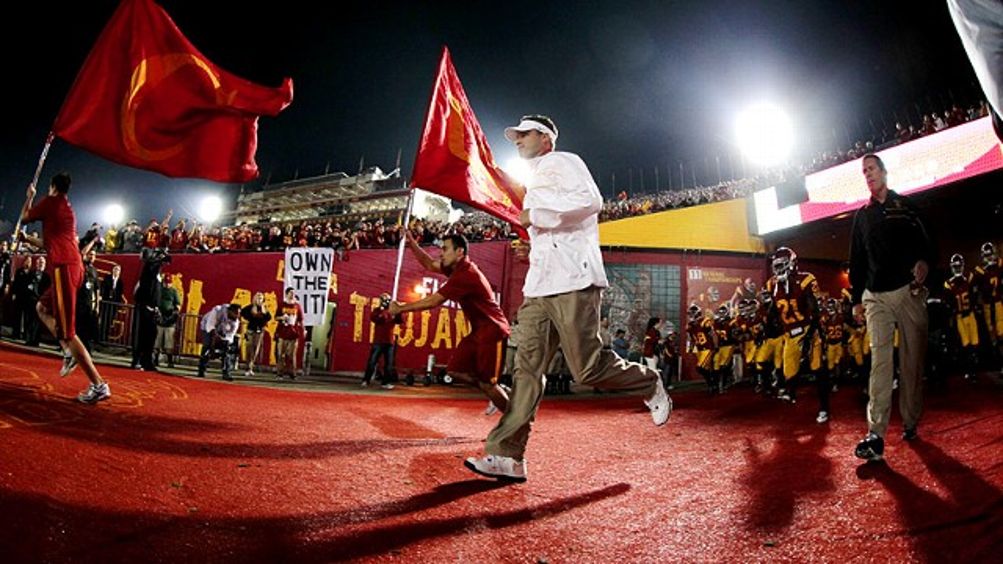 Before the golden age of USC football began, there was a scandal, a juicy little tale of ambition and betrayal straight out of a James Ellroy novel. On May 23, 1956, a Los Angeles deputy district attorney named Julius Miller Leavy invited reporters to a news conference: His alma mater, UCLA, had been rocked by pay-for-play allegations, banned from postseason play for three years, and fined $93,000, and now Leavy was going to rain hellfire on his crosstown rival in return. He had, he said, “documentary evidence” that USC had paid 60 players more than $70,000 over a two-year period. This led to further revelations of wrongdoing at other schools, to acrimony up and down the coast, to Leavy being hung in effigy on the USC campus. It facilitated the breakup of the Pacific Coast Conference, and brought on the formation of the Athletic Association of Western Universities, which would eventually become the conference we now know as the Pac-12.

By the time USC promoted a relatively anonymous 36-year-old assistant named John McKay to head coach in 1960,1 the scandals had dissipated, but the school’s football program was on shaky ground. USC hadn’t won a consensus national championship in three decades, not since the era of coach Howard Harding Jones and the brief tenure of a swaggering tackle who still went by his given name of Marion Morrison. McKay, who managed to be both comedic2 and aloof, installed the Power I formation, recruited some of the best and fastest African American players in Los Angeles (including running back Mike Garrett), and after two middling seasons won the first of four national titles. This was in 1962, and Student-Body Left/Student-Body Right — that enduring image of a Trojan running back standing upright, hands on knees, awaiting a pitch in the backfield — would become the defining meme of the defining West Coast football program. Fifty years later, as USC builds a $70 million athletic facility bearing McKay’s name, one could argue that it still is. (If McKay hadn’t left USC for the hapless expansion-era Tampa Bay Buccaneers in 1976 — a decision his son said he made largely for the money — he would be widely recognized as an iconic college football coach, up there with Bryant and Rockne. Instead, he’s more often remembered for his gallows humor: When asked to comment on the Bucs’ execution, he famously declared he was in favor of it.)

There was a dreamlike quality to watching USC games as a kid while a woolen blanket of snow coated our central Pennsylvania backyard: The sunshine, the Song Girls, Charles White and Marcus Allen sprinting toward the hashmarks out of the Power I, a former McKay assistant named John Robinson carrying on his predecessor’s legacy. Those of us east of the Colorado River like to think we take our football more seriously than they take pretty much anything on the Left Coast, but according to a study by sociologist Patrick Adler, there are more NFL players from Los Angeles than any other metropolitan area, and while the South’s influence is waning, the West Coast is the fastest-growing region for professional talent.3

I bring all this up because USC is on the brink of relevance again, because after a brief two-season hiatus due to a scandal weighted by five decades of inflation, the Trojans are near the top of the arbitrary preseason polls compiled by the glossy preview magazines that chewed up my summer vacations as a child. And once again, they’re led by a young coach in his late 30s who tends to inspire skepticism. And I don’t know if this is the dawn of another dreamlike golden age for the Trojans, but I know there are a lot of people back east who sincerely hope that it isn’t.

The object of their scorn, of course, is Lane Kiffin, who in his 14 months as head coach at the University of Tennessee managed to drive a wedge through the entire Bible Belt. From the beginning of his tenure in Knoxville, Kiffin felt a need to live up to the contentious reputation that trailed him from his abbreviated tenure under Al Davis in Oakland; it was as if he deliberately cast himself as the smug McGinley-esque frat boy with the hot wife who specialized in artless put-downs. He insulted Nick Saban and dissed Steve Spurrier, and most notably, he engaged in a juvenile pissing match with Urban Meyer (then at Florida), clumsily condemning Meyer’s recruiting tactics by inadvertently committing a recruiting violation himself. When he left for USC (where he’d been offensive coordinator under Pete Carroll), Tennessee students set fires in the street, literally scorching the earth in his wake.

But something’s happened since Kiffin went back west; it’s almost as if he’s begun to grow into himself. He reportedly made up with Meyer, he’s toned down the combativeness, and, according to ESPN’s Gene Wojciechowski, he had an especially revealing conversation with Steve Spurrier, in which Kiffin confessed he was trying to emulate the Head Ball Coach’s loudmouth histrionics and the Head Ball Coach told him he had gone about it all wrong.

“He’s really growing into the job,” said J.K. McKay, John McKay’s son, who played for his dad and is now a senior associate athletic director at USC. “That whole Tennessee thing seemed to me kind of overdone nationally.”

Part of J.K. McKay’s job is to keep Kiffin from appearing on SportsCenter for the wrong reasons, and so far, that’s largely happened. The Trojans have built strong recruiting classes despite the NCAA restrictions on their numbers, and the fact that Matt Barkley chose to return to USC rather than enter the NFL draft means he must have developed some sort of rapport with his coach. “Lane’s actually a pretty quiet guy,” McKay told me. “He’s also a pretty funny guy. He has a real dry sense of humor.”

If that seems hard to believe, maybe it should be. Kiffin still hasn’t proven much, but there is something about L.A. that seems to agree with him, in the same way it did with McKay and John Robinson and Pete Carroll before him. Maybe it takes a certain type of coach to succeed out there: McKay, the shy son of a West Virginia coal miner, never bought into the hoary coaching clichés, and his intensity was tempered by those goofy one-liners; Robinson was once described by the Los Angeles Times as having the “appearance and manner of a courtly, affable bank president”; and Carroll, freed from the AFC East rat race, became a hyper-cool swami4 who hung out in South Central in his spare time.

“They don’t know themselves,” Carroll told author J.R. Moehringer when asked what causes coaches to fail. “So they act in accordance with what they think they should be acting like, as opposed to finding out who they are so they can act directly in connection with the essence of who they are.”

When USC first hired Kiffin, I didn’t think he was capable of that sort of philosophical transformation. But now I wonder if he was merely imprisoned by youth, by geography, by a perception of who he should be rather than who he actually was. Now I wonder if the allure of Southern California is so powerful that it’s capable of mellowing out anyone. Even Lane Kiffin.