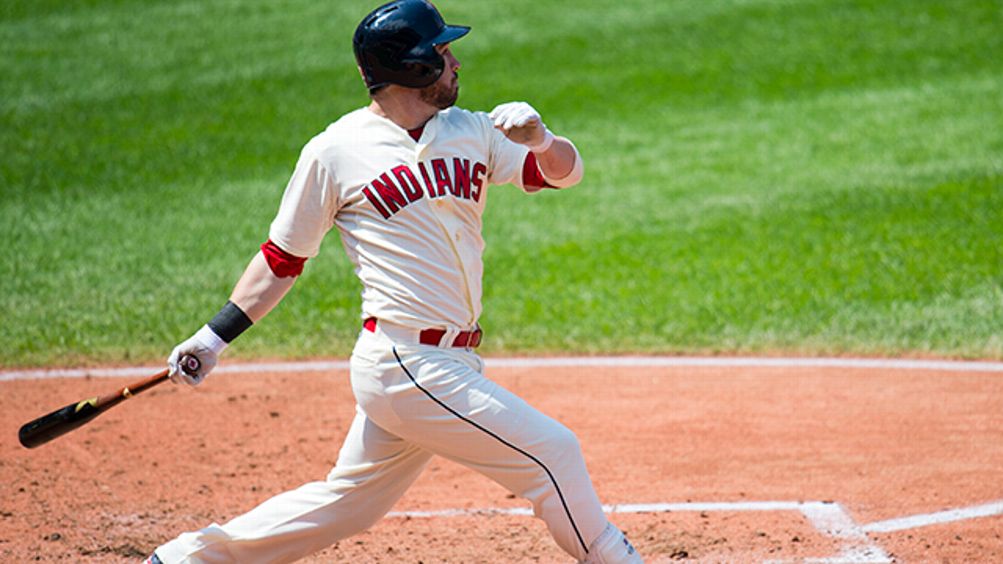 This late in the season, it’s only natural to freak out. Teams on losing streaks can feel trapped in a never-ending cycle, searching for a way to flush themselves out. When it comes to pennant fever, the best we can say is catch it while you can, don’t buckle under pressure, and by all means … get excited.

They were one ninth-inning rally away from a winless (and blooper-packed) week, and a six-game losing streak. They rank 23rd in runs scored since the All-Star break, averaging just 3.8 runs per game in the second half.

The top six hitters in Cleveland’s lineup have all seen their numbers dwindle since mid-July. Michael Bourn, Michael Brantley, Asdrubal Cabrera, Nick Swisher, and Carlos Santana have all faded during the dog days of summer. Jason Kipnis has taken the biggest hit, batting .301/.383/.514 in the first half, but just .240/.326/.351 since (with one home run in the past six weeks). The good news is …

A ninth-inning grand slam by Mike Aviles on Sunday enabled the Indians to salvage the final game of a tough series against the Tigers. While the Tribe sits 3½ games behind the Rays (and a half-game behind the Orioles) in the chase for the AL’s second wild-card spot, no current outsider team has a better chance of crashing the October dance.

For that, you can thank an incredibly friendly schedule. The Indians play just nine of their remaining 26 regular-season games against teams with better-than-.500 records. Fifteen of those 26 games come at home. And the closing kick is a cream puff buffet, with four games against the Astros, two against the White Sox, and four against the Twins; those teams’ collective record sits 86 games under .500.

The question is, do they have enough talent to get it done, soft schedule or not?

First, there’s the Danny Salazar quandary. In six major league starts this year, the 23-year-old rookie has been very good, striking out 37 batters and walking just nine over 33 innings, while posting a 3.00 ERA. But the Indians are exercising extreme caution with his workload, with Salazar throwing exactly 77 pitches in each of his past two starts — including the six innings of shutout ball he tossed against Detroit on Sunday. He’s now thrown 126 innings this year, already well beyond the 87⅔ frames he logged in 22 pitch-restricted starts last season. Corey Kluber could start Friday if his simulated game on Monday goes well, which would allow Cleveland to shut Salazar down or at least curb his innings total. But Kluber himself would be coming back after a month off, without a significant rehab period to get him used to throwing six-plus innings at a time. Whatever happens from here, the Indians bullpen looks likely to get taxed,1 with one or both of Salazar and Kluber likely to be innings-limited and Scott Kazmir having averaged just five innings per start over his past six outings.

Second, there’s the offense’s second-half slump. You might argue that this is just a blip, that the Indians are still the seventh-highest-scoring team in baseball, and that the talent is there for a rebound, especially against some weak pitching staffs this month. But really, the drought goes back about six weeks now, and it’s always possible that the weaker second-half numbers represent natural regression for several hitters who might’ve been playing a bit over their heads. Add to that unexpected masher Ryan Raburn (.272/.366/.574, with 15 homers in 195 at-bats) going on the disabled list with an Achilles injury, plus Jason Kubel (.220/.288/.324 at the time of the trade) and Kelly Shoppach (.196/.293/.346) being the full extent of Cleveland’s deadline shopping for bats, and you do have to wonder a bit.

Just so we won’t leave the Indians on a sour note, consider this: Cleveland owns a 4-15 record against the Tigers this year, and is 68-492 against everyone else. So yes, given that the Indians own an easier rest-of-season schedule than any other AL contender, maybe we should be optimistic.

Few teams are hotter right now than the Angels. They just completed a nine-game road trip in which they went 8-1 and allowed only about two runs per game. The defense has been sharp. Jered Weaver and Jason Vargas have dominated. Hell, even Josh Hamilton has picked up the pace over the past few weeks. After all that, the Halos’ chances at making the postseason are … still zero.

With the Angels doomed to also-ran status this year, you might turn your attention to next year and hope for some better results. Three weeks ago we profiled the AL’s other most disappointing team, noting how everything that could’ve gone wrong for the 2013 Jays did. An optimist’s take would be that better luck almost certainly has to lie ahead, and that Jays fans have a precedent that should make them feel better about what’s happened this year.

More broadly, it’s entirely possible that the Jays are a pretty good team hiding inside a terrible season. It’s easy to say now that all the Toronto hype was overblown last winter, that being installed as early World Series favorites didn’t make much sense given the question marks surrounding the roster, even after GM Alex Anthopoulos’s buying spree. But it’s also possible the Jays are experiencing something similar to the fate suffered by the 2012 Red Sox: a first-percentile outcome where everything that could go wrong has gone wrong.

If the Red Sox can do it, and the Jays can do it, the Angels can do it too, right? Well, not necessarily.

The Angels’ biggest problem is a dearth of young talent. Other than Mike Trout,3 the Halos sorely lack under-25 players with star potential on either the major league roster or in the minors. Some of this is understandable. From 2002 to 2012, the Angels averaged nearly 91 wins per season; that kind of success will of course push a team way down in the draft order, thus missing out on the cavalcade of stars drafted in the top 10, or even the top 20, over the past decade. Arte Moreno has been one of the most aggressive owners in terms of chasing and signing big-ticket free agents, too, which has cost the Angels several draft picks because of compensation rules.

But the most damaging factor here has been the Angels’ all-out approach to trades, and also their failure to properly recognize quality homegrown talent. You may not have loved them trading three prospects — one of them 2013 All-Star Jean Segura — just to get two months of starts from Zack Greinke. But at least the Angels knew they were getting a blue-chip pitcher in Greinke for the stretch run of a pennant race. The same goes for the 2010 deadline deal that netted Dan Haren, though in that case the Angels gave up both 2013 breakout lefty Patrick Corbin and Tyler Skaggs, another left-handed starter with major potential.4 But there have been other missteps that look worse in hindsight:

• Ignoring the warning signs on Scott Kazmir and giving up the now lights-out lefty Alex Torres (plus two other players) to get him.

• Giving up Tyler Chatwood for Chris Iannetta, then watching Chatwood blossom into a promising pitcher this year, in Colorado of all places.

• And we’ll see how Ariel Pena, Will Smith, and other young former Angels minor league pitchers develop over the next few years. Judging by how others have fared after leaving, you expect the worst (which in this case would be the best).

With all of those players gone, ungodly sums spent on Albert Pujols and Hamilton, and a free-agent market that has no can’t-miss players after Robinson Cano,5 the Angels face the prospect of carrying a top-heavy roster, one filled with underachieving players over 30. They can’t double down and trade more prospects for win-now fixes, because they don’t really have any more impact prospects to trade.

Some things are bound to improve next year. Given the volatility and unpredictability of bullpens, you figure the Angels can’t help but do better than the third-worst relievers’ ERA that they’ve put up this year. But other fixes carry more potential, and will also be tougher to achieve. The best hope for next year and beyond is for Hamilton and Pujols to revert back to being the players they were just a year or two ago. But Hamilton’s batting eye has been in the tank going back to last summer, even as he swatted 43 homers last year. Meanwhile Pujols is dealing with a litany of injuries, and even a healthy Pujols is highly unlikely to be nearly as good at 34 next year as he was in his 20s and just past 30. The starting rotation is still headed by a fine duo in Weaver and C.J. Wilson, but Weaver’s injury issues and especially his plummeting velocity are becoming serious concerns. Moreover, the three-through-five spots in the rotation figure to be wide open given a lack of internal options. Let’s just hope Jerry Dipoto or whoever’s running the team next offseason has more success than Dipoto did with the Tommy Hanson and Joe Blanton Journeys Into Hell.

So yes, even with regression toward the mean, a better bullpen, a beefed-up rotation, and at least a partial return to form for Pujols and Hamilton, a bounce-back year like the one the 2013 Red Sox are having is a gigantic long shot.