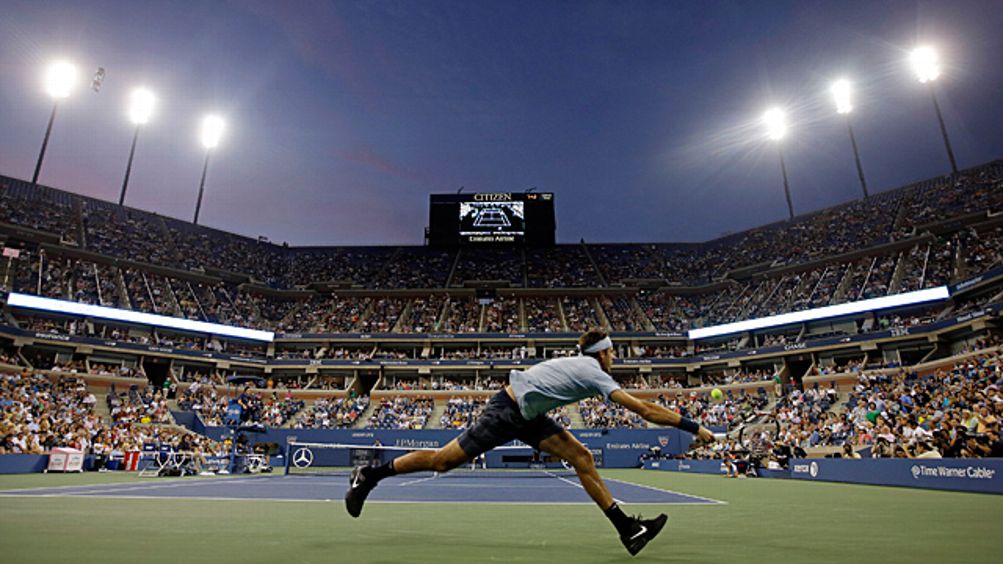 It is impossible to be everywhere at once, even for one moment, even just for the space of 7:54 p.m. during night tennis at the U.S. Open, 7:54 on a Friday night with the air in the mid-70s and the stadium lights lens-flarily blazing under a deepening ink-blue sky. Above the court at Arthur Ashe, a majority of the night’s 22,014 paying spectators are watching Juan Martin del Potro, the grave sixth-seeded Argentine, frown at his racket strings after losing a point to the 32-year-old Australian Lleyton Hewitt. The burst of focused applause that the crowd releases after every sequence of play, like a magician letting doves out of a hat, is still ringing. It can be heard outside the stadium walls, in the wide plaza of the Food Village, where a phalanx of Emirates airlines flight attendants in khaki skirts and red beret-like hats and twisting white veils is moving with military precision through a loose mass of twilight diners, toward the gleaming and glass-fronted Emirates Exhibit, where the bold and curious can interact with the genuine replica of an A380 Business-Class Lounge. The applause carries outside the Tennis Center, to the south edge of the grounds, where white-jacketed concession workers on their 15-minute breaks sit on concrete highway barriers and smoke cigarettes and eat greasy dinners out of brown paper bags, staring at the headlights of distant cars through the park’s shadows and trees. A glum blonde woman in a blue USTA polo hurries past them along the path, pushing a dolly loaded with cardboard crates of bottled Evian water. The water is bound for the empty refrigerator in the Media Center under the stadium, where right now, 7:54, tennis writers at their assigned workstations are sitting under fluorescent lights and clicking between Twitter and their WordPress drafts and tracking del Potro’s errors count on their individual laptop-controlled HDTVs. Photographers hoisting zoom lenses on their shoulders like delicate javelins go in and out, pushing around the Evian woman as she forces her way through the hall …

All this is happening, but no one can see all of it, not even the TV producers, not even the ones wearing headsets in dark rooms and frowning at walls made of camera feeds. I am not a TV producer. I am a person who has taken a complex and fascinating cocktail of cold medications, including some really prime meth-grade Sudafed that I had to show ID for at the Duane Reade on Lexington and 51st Street earlier today, and as a result I have a soft sense of not quite being bound to my own perspective, a sense that I can float freely among the U.S. Open’s many dimensions and parts.

I am sitting, corporeally, in the second row of Section 203 of Arthur Ashe Stadium, watching del Potro and Hewitt. Del Potro has lost the first set, 6-4, and is frowning at his racket strings and then crouching and bouncing a little as he waits for Hewitt’s serve. This matchup features two former U.S. Open winners, but it’s not supposed to be close. Hewitt, an ex–no. 1 from the interregnum years between Pete Sampras and Roger Federer, won in 2001 and hasn’t beaten a top-10 player at Flushing Meadows since; del Potro beat Federer in the 2009 final and for all anyone knows would be a multi–Grand Slam winner if he hadn’t been injured so much. He’s still only 24. Del Potro’s wearing a simple gray shirt and plaid shorts and a headband that makes him look like he’s about to perform the tea ceremony from The Karate Kid, Part II, while Hewitt’s clad in his traditional interregnum-era backward baseball cap and a shiny blue sports-tech top with a gold web or sunburst pattern. Del Potro is gauntly towering and hirsute and so gentle in affect that you could imagine birds landing on him, like Saint Francis. Hewitt is blotchy and furious and seems like a guy who tinkers with car engines, if that guy then figured out how to install the souped-up engine in himself.

Hewitt serves, and even from 203, halfway up the interior mountainside of the biggest tennis stadium on earth, you can right away spot the dynamics of the match. Del Potro’s weapon is his forehand, a bullwhip-of-God-type shot that comes over the net relatively flat and spinless but so hard that it threatens to knock chunks out of the USTA’s DecoTurf court surface. Hewitt is a tiny centaur who gallops down every ball. Hewitt’s hope in this match is to absorb del Potro’s power, neutralize it, and keep the ball alive till the big Argentine makes a mistake. For del Potro, playing against Hewitt involves a kind of maddening improvised calculus: Pound the ball hard enough to get past the smaller man’s scrambling, but sufficiently under control to avoid unforced errors. The more shots Hewitt returns, the more tempted del Potro will be to rip the felt off the ball, but the more felt he rips, the likelier he’ll be to miss. He’s like a race car driver who has to spend the whole race passing on corners.

On top of that, the wind’s gusting, which is OK for Hewitt but bad for del Potro, who takes longer and thus harder-to-adjust-based-on-late-breaking-sense-data strides. It’s not a fun matchup for him, with Hewitt poaching his angles and diving on his slice backhands, and his wrist isn’t 100 percent. Even when del Potro wins the second and third sets, his face on the giant stadium monitors displays the slightly insane melancholy calm of someone who has spent all evening trying and failing to mercy-kill a dying family pet.

I’m watching from 203. The umpire’s watching from his squat tower, a minor Roman deity of whom the ballboys in their symmetrical sprinter’s stances are the ceremonial leopards. The umpire emits periodic directives, like “Let, first service” or “Quiet please.” I emit periodic explosive bleats as I blow my nose into a brown-paper stadium napkin. I’m partly watching the Argentine reporter below me as he enters tweets on the physical keyboard of his BlackBerry, which involve a lot of “vamos!” and upside-down exclamation marks. But non-corporeally I keep floating down to the mezzanine boxes just below where we’re sitting, which are full of corporate clients and guys in fun-mode-disassembled suits — wool pants with no jackets, dress shirts with no tie, sleeves rolled up over fat metallic watches, shirttails not untucked but billowing like they’re gunning for America’s Cup. Mixed in among them are a few women in sober-colored sheath dresses and men in Nantucket Reds with little goofy whale-print canvas belts that you know instinctively didn’t come from Vineyard Vines but from a little company in Connecticut they read about on Styleforum.

Above the stadium but below the moon, the flag is rippling like a river that never goes anywhere. These, I understand, are Americans who have both Come to New York and Made It. Everyone Comes to New York to Make It. I’ve been sweating out a fever at the Waldorf Astoria for a week, so I’m familiar with the curves of the narrative, lasered like an S-Class dashboard: the little rivets of envy, the proxy measures of your own status that are other human beings. The brand managers and account reps in the mezzanine boxes may not be courtside important, but they matter in the game. You can tell by the way they’re milling around drinking Heinekens and $24 glasses of Moët & Chandon on their own private balconies, maybe not even talking about tennis because who really gives a fuck. They have worries, but their kids will play lacrosse. I wonder whether I, too, am here to Make It, and if so, whether I’m doing it or not, whether Section 203 is the desert path that leads to the American Dream. I start to float down even further, down past the player’s boxes and the umpire’s tower, down past where Hewitt is toweling himself off on a changeover, and then down beneath the court itself, under the sub-levels and access tunnels, under the cableways and drainage chutes, into the cracks and fissures where the rats are teeming, hundreds of them, thousands. And then, out of the deepest fissure, Donald Trump comes leaning, a silent bellow on his face. First one and then another of his jointed spider’s legs comes sliding out of the fissure, and then he’s skittering toward me, leaning his face toward my face. And then —

Right at that moment, I sneeze so expressively that the Argentine reporter looks up from Twitter to give me a disgusted look. Hewitt has just won a fourth-set tiebreak, during which he swooped around the court like an amped-up Pong paddle. The crowd, which has been pretty solidly pro-Delpo up to this point, with a lot of yelled upside-down exclamation marks, etc., is doing the thing that makes night tennis at the U.S. Open such a special sporting experience. They’re responding to the match based not on some preconceived outcome they’ve decided to want but on their own living emotional response to the tennis they’ve just seen played. I.e., they’re coming around for Hewitt, who’s been gritty and definite where del Potro’s been oddly vague. You’re starting to hear a lot of “Aussie, Aussie, Aussie! Oi, Oi, Oi!” and “C’mon, Lleyton!”

The energy, combined with whatever inertial weight del Potro’s been carrying all night, makes Hewitt suddenly seem about twice as fast as his opponent. He’s scowling determined thunderbolts under his backward ball cap and he’s fist-flexing between points and he’s throwing himself after the ball like an ACC point guard, and before you know it he’s up 5-1 and it’s deuce on del Potro’s serve. Delpo hits a wide serve out to Hewitt’s right and Hewitt just denies its right to exist with a crosscourt forehand return that the Argentine can’t even lunge for. Match point. Hewitt prowls behind the service line, fiddling with his racket strings. This is it. And then … del Potro double-faults. Hewitt throws his arms in the air. The unseeded 66th-ranked has-been has knocked off the no. 6 seed on the tournament’s biggest stage.1

The crowd goes … well, at least a little nuts. It’s been a weird, frustrating, and kind of tremendous night of tennis. Whether you’ve Made It or not, you emphasize the positive at the Billie Jean King National Tennis Center. Which is another thing that makes U.S. Open night tennis so great.

But the tennis is only one of a million things happening at the U.S. Open at any given time. A guard in a searing USTA-issue yellow polo shirt is standing under the lights at the Media Center entrance using a handheld laser device to scan a journalist’s press pass. A mom is distributing granola bars to a family walking around the elevated daises of the Mercedes vehicle display. An exhausted Ralph Lauren shop attendant is straightening a rack of gold-piped blazers inside the Ralph Lauren shop. Serena Williams is in the tunnel ready to warm up. A large crowd is streaming over the bridge toward the subway station. A huge praying mantis, almost as long as your hand, has landed on a signboard on the bridge. I take a picture of it. It’s one of the biggest bugs I’ve ever seen, and it’s just sitting there on this pedestrian bridge, surrounded by tennis fans. A drunk guy sees me taking the picture and tries to scare it away by waggling his arms, but it sits there like it’s dead, which it might be.