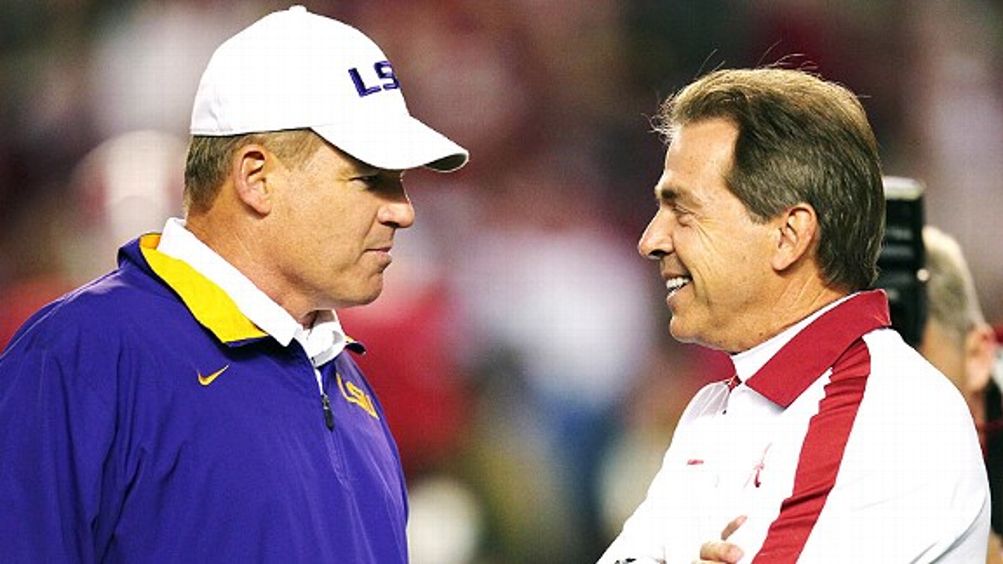 I may hail from SEC country, but I count myself among the fans who felt disgruntled at the announcement of this national championship rematch. I didn’t want it. I wanted to see college football’s best receiver, Justin Blackmon, compete with the Tiger secondary. I wanted a matchup of conference champions. Plus, my discomfort with this game had a moral component. In 2004, Auburn was locked out of the big game after going undefeated, and boy were we mad down South. The Pac-10 and Big 12 were chosen over the poor old SEC. We were brushed aside, and we shook our fists against the heartless, cold universe.

That was seven years ago. It was five years ago that Florida begged and begged and finally received its chance to beat the hell out of Ohio State, and boy did it feel good to be included, to be treated with respect, to not be frozen out. So leap forward, over several years of BCS champions from the SEC, and now it’s the other conferences begging. What do we say? “Let them eat cake.”1 Once the villagers have stormed the castle, it sure doesn’t take long to get comfy in those canopy beds, grow a belly from all the turkey legs and ale, and start throwing rocks out the windows at the noisy, insolent peasants down there. Quickly, a royal decree comes down to widen the moat. Raise taxes. I’ll leave this analogy alone. You get my point.

I know, the SEC didn’t decide to close the door on Oklahoma State. The voters did. But let’s be classy, SEC fans. Let’s acknowledge that this isn’t right. It isn’t morally right, and that makes it football-wrong, too, because morals you can be sure of, and football games you can’t. Florida wasn’t supposed to be able to play with Ohio State in 2006. Everybody was sure of it. Everybody. Ohio State and Michigan were the two best teams. Fans, TV analysts, real coaches — they all were absolutely sure. Until they weren’t.

All right, John, off the soapbox. This is the game we’ve got, Louisiana State University and the University of Alabama, and it’s a great game. Time to get onboard. We said we didn’t want a rematch, not that we wouldn’t enjoy it. Of course we’ll enjoy it.

Here’s one thing you can say on behalf of the BCS system: It doesn’t give up. It has given us championship game participants who only twice before haven’t won at least a share of their respective conferences, and both times those teams lost. Both were from the Big 12, not that it means anything. Nebraska and Oklahoma.2 The BCS is taking another stab at surrealism, in this case the surreal befuddlement that will envelop LSU fans if they see old Nick walking away with the crystal after everything the Tigers have done this year. This sort of thing happens all the time in sports that have playoffs, but in college football it’s highly irregular for a team that doesn’t accomplish any of its goals (division title, conference title, defending home field) to walk off with the ultimate prize. It just doesn’t happen. That is, until it does.

In recent years, it’s been easy to figure out the championship game. SEC versus Other, and SEC has a couple more horses and a few more scars. This year, there’s no under-steeded, under-scarred Other. There’s a big-play juggernaut and a steady, strong team bent on revenge. A lot of days sit between the end of the season and the title game, and one team has been polishing a trophy while the other has been stewing. There’s pressure on Nick Saban, and that pressure will flow downhill. Yes, I said there’s pressure on the Sabatron 4.0. He doesn’t have a heart, of course, but he can feel it in his circuitry. He’s supposed to be the best coach in the world at the greatest college football program in the nation, and if some bayou trash in yellow and purple can invade Tuscaloosa and pound the Tide until they flinch and then invite them down to New Orleans and beat them again … well, that ain’t good. Saban is supposed to be an assassin and Les Miles a buffoon, but the thing about assassins is they’re not accustomed to being shot back at, and the thing about buffoons is they’re too dumb to be scared.

So it stands to reason that Alabama has an edge in the intensity of its preparation, but how much of an edge? Who knows? This LSU team loves, loves, loves hitting, and I’m sure the LSU coaches haven’t needed to point out that the season has been a series of battles and January 9 will be the war. The game is in New Orleans, so being too hyped may be more of a worry for LSU than coming out flat (which they’ve done in their past two games, before clearing their throats and straightening their ties and getting down to the business of whipping Arkansas and Georgia). Note: I saw a segment on TV with the Alabama players reflecting on the 9-6 loss and looking forward to the rematch. Lots of what you’d expect — the defeat hurt; LSU had taken something and Alabama needed to get it back; it was a bitter pill. The Tide seemed to be safely navigating the iceberg-laden seas of media attention, until right before the commercial break, when star lineman Barrett Jones comes on-screen and, like a ray of bayou sunlight finding its way through swamp cypresses, says the rematch isn’t about revenge but about “restoring order.”

Restoring Order. Marooned for months without bulletin board material, a gentle rain begins to fall on Les Miles. The remark may seem innocuous, but that’s only if you’re unaccustomed to Alabama arrogance. The Tide faithful believe in their hearts that they’re entitled to beat you. You’re not as good as they are. You’re just not. If you happen to beat them, it’s an irritating fluke. If Bill Belichick can peek over an embankment of Lombardi trophies and convince his teams they have something to prove, Les Miles can fling the SEC trophy in Lake Pontchartrain and get some mileage out of “restoring order.”

How about on the field? A question pops to mind: How will the kicking troubles of November 5 influence Alabama on January 9? Positively, I say, because on Monday night Alabama’s four-down territory will be broad. Saban won’t want to venture a field goal of more than 35 yards, which makes fourth-and-3 from the 26-yard line, for example, a go-for-it down. A missed field goal is one of the more disheartening miscues in football, while converting a fourth down is one of the most heartening accomplishments. Saban and Jim McElwain have had ample time to assemble a package of plays specifically for these situations, and they won’t hesitate to call them. Instead of missing a bunch of field goals and reacting to those misses with an ill-advised trick play,3 they’ll attack the real estate between midfield and the red zone with conviction.

And what lesson did LSU learn? I assume it’ll do something to prevent Jarrett Lee, who’s not a non-quarterback, from closing his eyes and rainbowing passes into the teeth of the Bama secondary … like keep him over near the Gatorade. Jordan Jefferson’s ability to scramble was about the only thing that could keep the LSU offense on the field in the Tuscaloosa game, and when your quarterback’s busy running the ball that means he’s not busy throwing picks.

The quarterback play for both these teams has been maligned, and there’s not much reason to think the signal-callers will fare much better this time around than in the first game. They’re average college quarterbacks facing fierce pass rushes and tight coverage. This is more a shame for LSU than for Alabama, because the lack of an air attack renders the Tigers’ only significant position group advantage (other than kicker) moot. The LSU receiving corps is better than Alabama’s, but it makes no difference if Jefferson and his O-line are overmatched. Two catches each for Rueben Randle, Russell Shepard, and Odell Beckham probably won’t get the job done this time around. As for Bama, Marquis Maze needs to come up huge. And then there’s old Michael Williams. If he has a couple of big catches and Alabama wins, no one’s going to care anymore that Eric Reid ripped the ball away from him on the pivotal play of the Tuscaloosa defeat. Reid may make another big play. Morris Claiborne may. Tyrann Mathieu will.

To lose this game would be tragic for LSU because it’s been making iconic plays all year. It’s beaten more good teams than most national champions have to. It’s got one of those squads with off-the-charts chemistry and a feeling of destiny. But if the Tigers lose in New Orleans, it will only seem like the end of the world until the Bengal faithful have some coffee, shower, down a couple of oysters, and take a peek at next year’s roster. LSU will have to break in a new quarterback, but not a wet-behind-the-ears guy — a 250-pounder a few years out of high school named Zach Mettenberger. (It’s no secret that the LSU quarterbacks haven’t exactly been carrying the team anyway.) The whole stable of running backs will return. Shepard and Beckham. Most of those havoc-making DBs. The defensive line might be even better.

On the Bama side, a loss would besmirch the program. No one is supposed to get the best of Nick twice in one season. The Tide aren’t supposed to be the second-best outfit in their division. And to further deflate Tide fans, next year they play these guys in Baton Rouge. And to even further deflate them, with the losses of both starting receivers and tight end Brad Smelley and big Josh Chapman on the D-line and three out of the four top corners and Mark Barron and, most crucial, Trent Richardson, some of next year’s pleasant road trips could turn into vacations that attack: at Arkansas, at Missouri, at Tennessee. Some of the Crimson staunch may laugh at the idea of losing to those teams, but the savvy ones know how important it is to have backs like Mark Ingram and Richardson, who make everything easier for every other player in a Tide uniform. Eddie Lacy is good, but he’s not Richardson. It’s easy to see that Alabama needs to seize the opportunity it’ll have on Monday.4

Before I leave you alone, I’ll throw out one highly unlikely scenario, just so I know someone has thrown it out. Alabama wins by a narrow margin, a field goal or less, and the AP voters decide that LSU’s win in Tuscaloosa and Bama’s win in New Orleans equate to a wash, and because LSU did so much more during the regular season, the voters put LSU at the top of the poll. OK, someone said it.

Previously from John Brandon:
The Bowl Season Is Upon Us
When Dwight Howard Leaves Orlando
The Biggest Week in College Football That Doesn’t Really Matter
Rivalry Week and the BCS Rat’s Nest
Can LSU Run the Table?
The Pac-12 Matters! Well … This Week.
Who’s No. 1? LSU or Alabama?