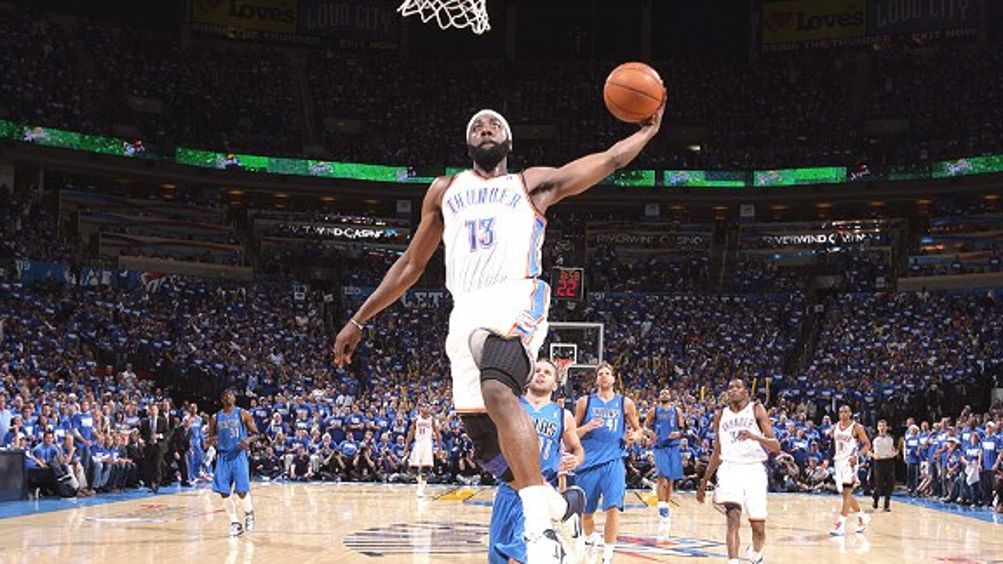 The Oklahoma City Thunder’s selection of James Harden with the third overall pick in 2009 was a bit of a head-scratcher, especially with guys like Tyreke Evans and Stephen Curry left on the board. The Thunder were looking for a player who could do a little bit of everything, and that was the scouting report on Harden. Despite some typical rookie struggles in his first season, Harden seemed to come into his own last year. Harden played all 82 games, coming off the bench in 77 of them and scoring 12.2 points per game with a true shooting percentage of 59.8 percent.

In fact, Harden played so well that, according to Synergy Sports Technology, he was one of the most efficient offensive players in the NBA. He scored 1.068 points per possession; among players with at least 100 possessions, Harden’s PPP ranked 29. Harden accomplished this using several different offensive skills, but he was at his best coming off of screens both with and without the ball.

Harden is one of the NBA’s most efficient players when it comes to working off screens away from the basketball. In these situations, Harden posted a PPP of 1.193, good enough for the top 4 percent of all NBA players. Harden is so effective because of the moves he makes before receiving the screen:

You rarely see Harden coming straight off screens. Rather, he sets them up, using his body to create distance and space before receiving screens, and then using that distance to get open looks. In the first clip, Harden walks his man to the block and then pushes off slightly before using the screen. Harden also knows how to read and react to the way defenders cover him. In the following two plays in the above clip, you see the defense trying to prevent Harden from using a screen, first by jamming him and working over the screen and then by shooting the gap. Neither works because Harden reads the defense and counters, flaring off of both screens and creating tons of space to get a clean look at the basket. Harden is so good moving without the ball that I think his production could suffer if the Thunder use him — as has been reported — to initiate the offense consistently. If you ask him to begin several possessions with the ball in his hands, you are taking away one of his biggest strengths.

When using ball screens, Harden posted a PPP of 0.963. That put him in the top 8 percent of all players, and it’s this success that has led many observers to believe that Harden is the Thunder’s best choice when it comes to initiating offense. That may not be the case. I like Harden more on the wing, running pick and rolls from the side of the court as a shooting guard position. Harden was extremely efficient on pick and rolls from both wings (1.222 PPP/top 3 percent on the left side and 1.071 PPP/top 17 percent on the right), but he struggled on high screens at the top of the key (0.966 PPP/65th percentile).

Harden is more effective on the wing because he’s a few steps closer to the rim, and he immediately gets into the heart of the defense when he comes off ball screens there. This quick attack puts the defense on its heels and opens up opportunities for Harden to score or create for his teammates: 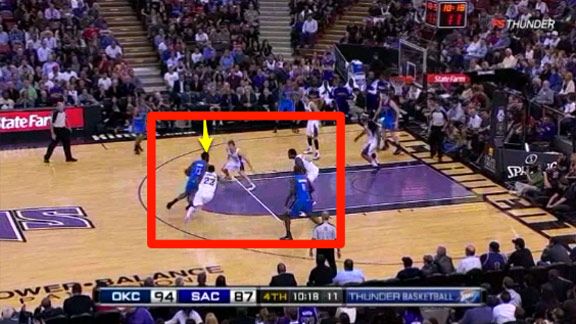 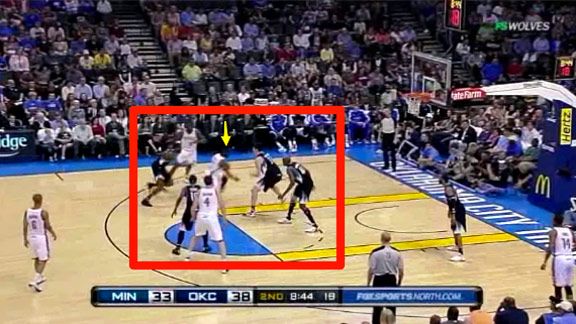 In the screenshots above, Harden has just used a ball screen set on the wing. As soon as Harden comes off the screen, the defense recognizes him as a threat and begins to shade toward Harden. Look at the boxed defenders in the images. In each one, more than two defenders have committed to defending the ball screen. This means that someone is going to be open, and it forces the defense into tough rotations. Here are both of these plays live:

These clips showcase Harden’s fantastic decision-making with the defense on its heels. When Harden drives off the ball screen and enters the lane, the defense reacts to him, which creates passing and driving lanes for Harden. In the first play, when Harden gets to the key, DeMarcus Cousins steps up and leaves Nick Collison open under the rim. Harden sees this and drops the ball to Collison for a dunk. In the second clip, Minnesota’s help defender shows, but it’s a soft hedge that leaves space for Harden to attack. Harden gets to the rim and converts the layup.

Things look different when Harden come off top screens. The threat of him being in the heart of the defense as soon as he uses the screen is no longer there. As a result, there is less pressure on the defense. Here are some images of Harden using top screens: 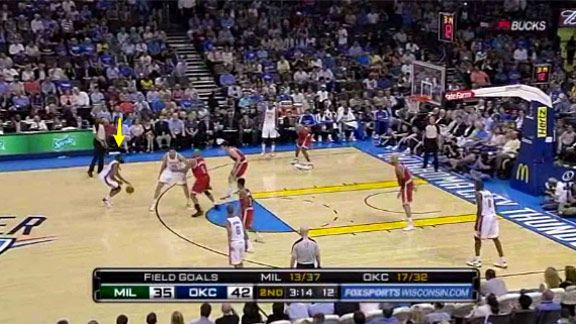 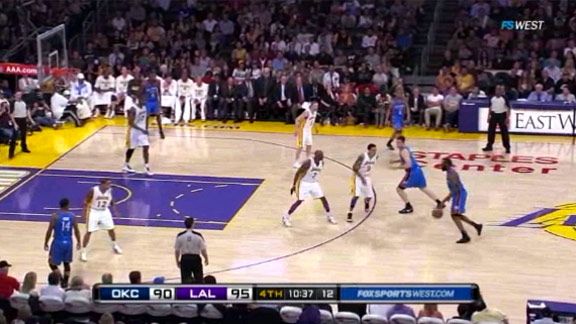 These pick-and-roll plays are happening about 40 feet from the rim. Since Harden is so far away from the basket when he uses the screen, he is less of a threat to defenses, and the play can be covered with just two defenders. It also tempts Harden to attempt 3-point shots off the dribble. Harden can knock these down, but they should be considered settles compared to driving the lane and forcing the defense to react.

Remember those wing pick and rolls where Harden gets to the paint and puts the defense on its heels? Look at the help defenders in these two high-screen plays. When Harden comes off the screen, none of them react. The reason? Harden isn’t an immediate threat. Not only does this prevent Harden from scoring, but it also prevents him from creating for others. If defenders aren’t forced to step up and help on Harden, there will be fewer passing lanes for him to find his teammates.

Not only that, but when Harden does attack off high screens, he’s got a much longer distance to travel between where the screens are set and the rim:

This allows more time for defenders to rotate and challenge Harden’s shots, as this video shows. Harden’s difficulties with the high screen are not just obvious on tape, but they are also apparent in his statistics. For some reason, however, the Thunder called top screens for Harden on 60.4 percent of his ball screens last season. If Harden is to become the third star in Oklahoma City’s stacked lineup, the Thunder should wean Harden off of high screens and set more picks for him on the wing, where he is more creative and effective.

Perhaps the biggest weakness in Harden’s game is his inability to take care of the basketball. This is strange considering Harden’s reputation as a very savvy player. That said, turnovers were a problem for Harden last season. He gave up the ball in 11.3 percent of his offensive possessions. Harden commits many of his turnovers when he decides he wants to attack the basket and gets cut off by a defender.

Harden seems to adore the Euro-step move that Manu Ginobili made famous in the NBA. It is a great move to get defenders off-balance, but Harden uses it so much that his defenders anticipate it. The result was more and more turnovers as he attempted the Euro-step over the course of the season.

What’s one way to limit turnovers when attacking the rim? Develop a floater. Last season, Harden shot just 18 runners and made four of them. This means that when Harden drives to the hoop and wants to attempt a shot, he needs to get all the way to the rim. Defenses know this, and they’re ready for it. If Harden develops a runner that he can hit in the middle of the lane, he’ll become a greater offensive threat. Also, because he doesn’t have to penetrate all the way to the hoop to score, he will limit his turnovers.

One of the scary-impressive things about Harden last season was that he managed to be a very efficient offensive player while turning the ball over on more than 10 percent of his possessions. If he can reduce his turnovers, he will become even more efficient, establish himself as a bona fide NBA star, and help the Thunder become a championship contender.

Previously by Sebastian Pruiti:
How Chris Paul will change the Clippers’ offense
A breakdown of Eric Gordon’s path to superstardom
Chris Paul and the Lakers: What could have been
How John Wall can become a Star in his Second NBA season
The Pros and Cons of Kentucky’s Anthony Davis