Counting Pennies and Clipping Coupons in the Bronx 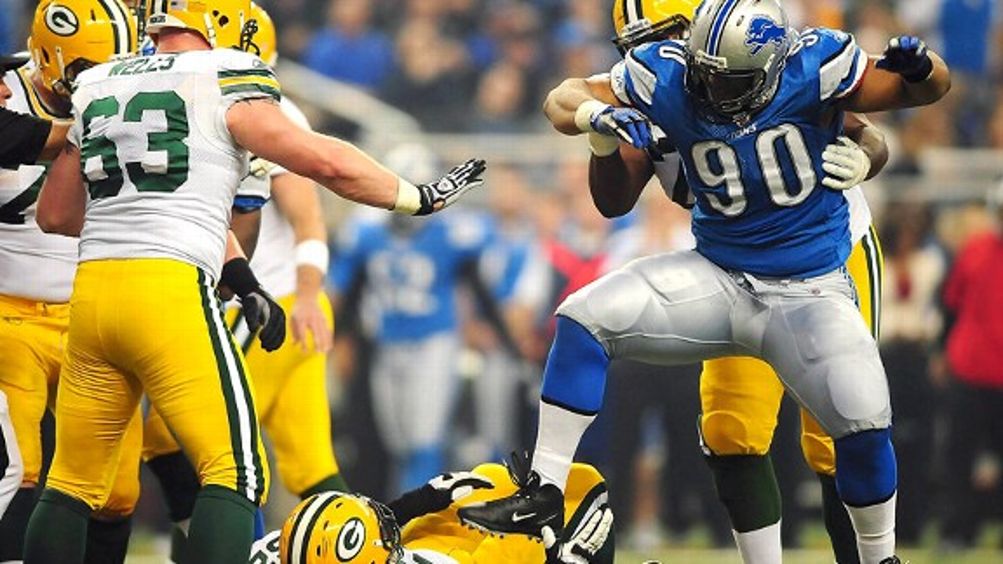 If you have any memories of the Saints laying a 31-17 beatdown on the Lions in Week 13, they’re probably of Drew Brees marching his team down the field at will against a Lions team that seemed to have its finger on the self-destruct button for the second consecutive week, taking personal foul penalties on the opposing 2-yard line as part of some misguided “nasty” attitude.

Well, let’s tap the brakes on both those storylines. First, the attitude issues. Yes, the Lions looked awfully undisciplined on national television against one of the best teams in the NFC. But the idea that they’re a group of thugs banded together by coach Jim Schwartz to commit personal fouls as he shouts “Kill!” at the field? Downright silly. In their 16 games this year, the Lions committed less than one penalty more per game than their opponents while averaging fewer than six yards more in penalty yards. Not ideal, but far from their reputation. And those penalties are generally of the holding and pass interference variety, as opposing teams committed nearly three times the total of unnecessary roughness fouls that Detroit did:

In the first matchup, the Saints did an excellent job of riling the Lions up. There were a half-dozen plays on which they got an extra shove in or a borderline late hit that came after the whistle. The difference in penalties and yardage was massive — the Lions committed eight more penalties and racked up 77 more penalty yards. It’s also totally inconsistent with Detroit’s season. When the Lions played the Niners in the famous handshake-fight game, the Niners committed nine more penalties than the Lions and accrued 66 more penalty yards. Was that because their coach is a hothead? Do they have the reputation of being a bunch of thugs? Of course not, since the game wasn’t on national television.

As for the actual play in that Week 13 game, well, the margin of victory was bigger than the gulf in performance between the two teams. The Lions actually had the ball inside Saints territory during the fourth quarter with a chance to tie the game. They had a field goal blocked just before halftime, a player fall down after a long catch who would have likely scored a touchdown if he had stayed upright, and … OK, maybe that personal foul penalty they took on the Saints 2-yard line wasn’t exactly bad luck.

But the Lions were unquestionably in that game, and that’s a scary thought because they didn’t have the proper personnel with them. Ndamukong Suh was suspended. Both top cornerback Chris Houston and his backup, Brandon McDonald, were out. Perhaps most important, safety Louis Delmas was on the sideline. He was replaced by Chris Harris, who appeared to go on a friendly stroll to the sideline for some unknown reason while Robert Meachem ran by cornerback Eric Wright for a long touchdown pass. Or maybe it was Wright’s fault. Either way, they had a secondary that was in shambles and a defense that was missing arguably its two best players. Delmas and Suh are enormously valuable and allow Schwartz far more leeway in crafting a defensive scheme to slow down Drew Brees.

Can they carry it out?

Brees’ average day this year saw him go 29-of-41 for 342 yards with three touchdowns and a pick. With all those injuries and the Suh suspension, the Lions managed to hold him to a relatively average day: 26-of-36, 342 yards, three touchdowns, no picks. The idea of a 342-yard, no-interception day being mundane seems alien, but this is 2011 and it’s Drew Brees.

The seam route is where the Saints really make their money. It’s where Marques Colston first became a star, but now the Saints have no qualms about sending Jimmy Graham on the same route, and Lance Moore even caught a 20-yard touchdown pass on one during the first Lions-Saints game. It’s the sort of route that gets most quarterbacks flustered, since it’s a throw into a tight window that has to travel through the middle of the defense and, occasionally, can get your receiver killed by a safety breaking him into tiny bits. Brees gets it to work with believable play-action and eye movement; watch him look right to free up space against the Cover 2 before he launches the pass to Moore up the middle. It’s an extremely tight window, but if Brees can hit it, the play is basically indefensible. And Brees hits that window more often than not.

What the Lions did to keep their heads above water with Brees is play a mostly conservative defense. They didn’t blitz all that frequently, and when they did, they used zone blitzes to try to get pressure with their scheme as opposed to the sheer numbers a typical Gregg Williams blitz might bring. New Orleans’ group of terrifying athletes at receiver create mismatches down the field, and the hopes of Schwartz and defensive coordinator Gunther Cunningham appear to be pinned to the idea that extra help can mitigate mismatches. They tried to take away the big play, and outside of the blown coverage on the long Meachem touchdown and a 38-yard pass to Meachem up the sideline,1 they were able to do so.

With that in mind, the Lions undoubtedly had some faith in their ability to get off the field on third down, which has been a colossal problem for Saints opponents. At the time of the first game, the Saints were the best team in the league at picking up third-down conversions, while the Lions were the best defense in the league at preventing teams from doing so. Detroit slowed them down, but Brees and company still went 6-for-12. And after the injuries to Houston and Delmas, the Lions’ efficiency has slipped some. They’re now fourth-best in the league, allowing teams to convert on only 32.8 percent of their third-down attempts. The Saints, meanwhile, are still the best offense in football on third down, and it’s not by a small margin. New Orleans picks up its third downs 56.7 percent of the time, and nobody else is even above 50 percent. (Second-place San Diego is closer to ninth place than it is to first.) As big as the penalties were in the first game, the difference in third-down conversions (Detroit picked up just two of the 11 third downs it faced) was probably the biggest reason why the Saints won the game. If that difference holds up again the second time around, Detroit is probably hopeless.

First goal for the Lions: No stupid penalties on offense. Nate Burleson had five catches for 93 yards, but he also had three offensive pass interference calls that took 29 yards away from the team. An illegal formation wiped away a 15-yard reception for Calvin Johnson. A silly hold on Kevin Smith took away a rare third-down conversion. And yes, that killer personal foul penalty after a play on Titus Young turned third-and-goal from the 2-yard line into third-and-goal from the Saints 17. As stated earlier, these aren’t crimes of attitude; they’re crimes of sloppiness. Many of those penalties came during the first half, when the Saints were able to take a 24-7 lead. Had the Lions avoided penalties, chances are they could have stayed in the game and, perhaps, even snuck out a victory.

It was very clear that the Lions were worried about their offensive line’s ability to hold up against a complex Saints pass rush, especially when they had fresh legs during that first half. As a result, their playbook looked a lot like an Eagles fan’s nightmare. If there was a screen or quick throw that the Lions knew, they ran it against the Saints. The quick hitch. The traditional halfback screen. The bubble screen to a wide receiver. The fake-handoff-fake-reverse screen that the Patriots tried to run against the Giants on the opening play of Super Bowl XLII. When they did run the ball, it was almost always on a delay as part of a draw. Everything the offense did was designed to manipulate the pass rush and slow it down. It worked to some extent, as the Saints sacked Matthew Stafford only three times and knocked him down twice in 47 dropbacks, but it also limits their ability to get into bigger plays. They eventually got Johnson open downfield on a double move — so open that Cris Collinsworth actually said “Uh oh” out loud as Stafford released the pass — but Stafford’s throw was late and nearly intercepted.

Megatron didn’t have his biggest day, as he caught six of the eight passes thrown to him for a total of just 69 yards, and he had just two receptions for 19 yards during the first half. The Saints clearly built their scheme around stopping Johnson, actually lining up two defensive backs on him at the line of scrimmage as if he were a gunner on a punt return. Plenty of teams will put bracket coverage on Johnson, but that’s extraordinary. The Lions used tight end Brandon Pettigrew as a pass-blocker for most of the day, so they’ll have to hope that Burleson, Young, and receiving tight end Tony Scheffler will be able to beat one-on-one coverage for big plays. In last year’s shocking loss to the Seahawks, Saints safety Roman Harper got burned on three different touchdown passes. He’s not quite that bad, but he’s a liability in coverage that the Lions will try to exploit by isolating him versus Scheffler. It’s incumbent that Stafford identify that matchup at the line of scrimmage and take advantage of it.

The Lions enjoyed some success running the ball against the Saints when Kevin Smith was in the game. Since he announced his return with a 140-yard game against the Panthers in Week 11, he’s averaged 4.9 yards per carry and scored four touchdowns. The rest of the team is averaging 4.1 yards per carry and has scored just once on the ground. Smith is perpetually an injury risk, and a collision with Scheffler at practice briefly forced him to the sideline, but he should be healthy for Saturday night.

Do you like old kickers? You will love this matchup. Forty-one-year-old Jason Hanson will battle 42-year-old John Kasay in a battle of guys whose Pro Set cards you were bummed to get when you bought a pack. According to Football Outsiders, though, both kickers have been below average on scoring plays this year. With these offenses, they’re not likely to be an enormous factor.

The only facet of the game where either team is really effective is on punts, where Thomas Morstead of the Saints has been worth more than 10 points of field position, which is good for sixth-best in the league. It’s a safe bet to say that Morstead won’t be affected by the high-pressure environment of the playoffs; remember, he’s the guy who booted the surprise onside kick to start the second half of Super Bowl XLIV as a rookie.

Detroit didn’t outplay New Orleans in the first game, but it was a lot closer than people realize, and that was without two stars on defense. A healthy Lions pass defense is probably the best unit Brees has faced all season. Expect them to slow New Orleans down and produce a lower-scoring game than Vegas expects (as the total now stands at 59 points), but the Saints should still be able to pull out a victory. New Orleans 28, Detroit 20.