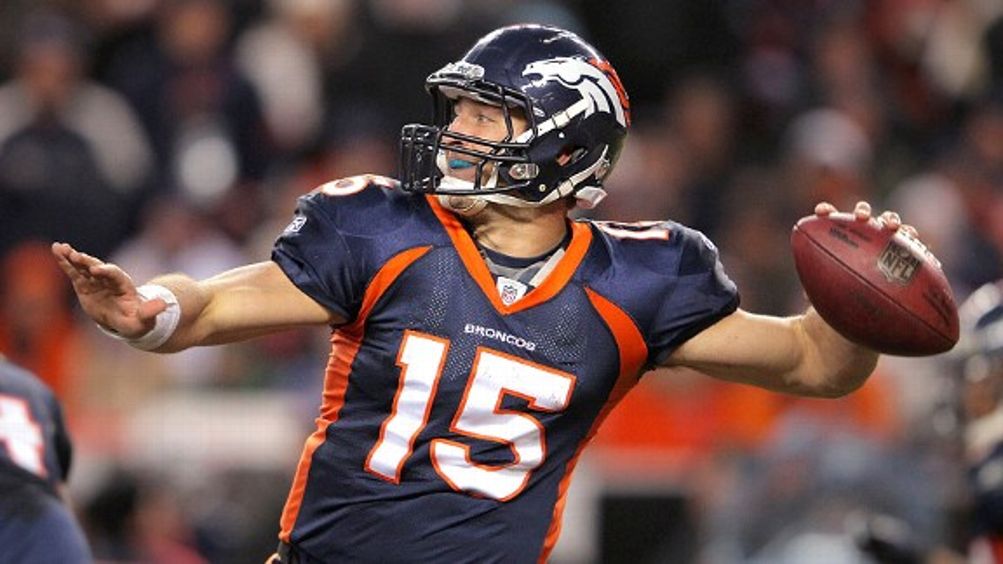 Don’t believe anyone who tells you that the Broncos don’t have a prayer when they host the the Steelers on Sunday. There have been two instances since the merger in 1970 of a .500 or worse division champion hosting a far superior wild-card team in the first round. In both cases, the team that was written off won. The 7-9 Seahawks beat an 11-5 Saints team last year, and the 8-8 Chargers defeated the 12-4 Colts in 2008. A Broncos victory would be unlikely, but it’s hardly unprecedented.

As Simmons pointed out on Monday’s B.S. Report, it’s not as if the Steelers are some destroyer of worlds when they leave home. They’re 5-3 on their travels away from Heinz Field, with losses to the Ravens, Texans, and 49ers, but their wins haven’t been very impressive. They beat the Browns, Chiefs, and Colts by four points or less. Their biggest road win, depending on whether you prefer margin of victory or strength of schedule, was either a seven-point win over the Bengals or a 12-point defeat of the Cardinals. The Steelers might not have beaten a tougher team on the road this year than the one they’ll face this Sunday.

In addition, Pittsburgh is banged up. Ben Roethlisberger’s still suffering from a high ankle sprain that flared up on him again last Sunday against Cleveland. Center Maurkice Pouncey has his own high ankle sprain and had his own setback this week, forcing him to miss practice on Thursday. His likely replacement, Doug Legursky, missed Week 17 himself with an injury. Halfback Rashard Mendenhall tore his ACL on Sunday, turning the running game over to the inexperienced (if similarly effective) Isaac Redman. Star pass-rusher LaMarr Woodley has been hugely limited by a hamstring injury during the second half of the season, having played in just parts of two games since Halloween. And safety Ryan Clark will be unable to play in Denver, owing to a sickle cell trait that caused him to lose his spleen and gallbladder the last time he played in Colorado’s thin air. Denver’s injury complaints, by comparison, are relatively mild.

You often hear about a team’s strengths matching up with the opposition’s weakness. In this case, the opposite may be true, as well as a key reason why Denver has a shot at winning this thing. The Steelers’ biggest asset is their pass defense, which ranks third in the league in DVOA. They’re only 15th against the run. That’s the wrong mixture for this matchup.

None of that suggests anything about Denver being a great or even good football team, of course. They were 8-8 and outscored by 58 points; since the merger, only seven 8-8 teams have been outscored by more points than the Broncos. They’re about as good as the 2010 Jaguars, who went 8-8 and were outscored by 66 points. Denver’s here, of course, because it went 7-4 in games decided by a touchdown or less and got plenty of help during Weeks 16 and 17. If the Steelers get out to a double-digit lead early, the Broncos basically have no hopes of coming back. But there are reasons to believe that this will be a close game.

The familiar Pittsburgh Steelers offense under coordinator Bruce Arians revolves around the trips bunch alignment, with two wide receivers and tight end Heath Miller lined up together in a “V” shape on one side of the formation. On passing plays, the Steelers use it to set picks on man coverage and overload zones, and on running plays, it gives them a cavalry to clear out lanes. (Our colleague Chris Brown has some images and details on Indiana using the trips bunch at his Smart Football site.) You might not see the trips bunch quite as much on Sunday, though, because of Miller’s responsibilities as a pass-blocker. Denver has sacked opponents on 7.1 percent of dropbacks, while the Steelers have taken sacks on 7.2 percent of their dropbacks. In both cases, either side is 10th in the league in those categories.

And those sack numbers may not have much relevance because of how late-season injuries are affecting both the Pittsburgh passing game and the Denver pass rush. With the Steelers, the high ankle sprain suffered by Roethlisberger has greatly limited his ability to scramble and extend plays. When Roethlisberger played against the 49ers in his first game after the ankle sprain, Pittsburgh went to a lot of short drops and quick throws to prevent the pass rush from getting to Roethlisberger. When Roethlisberger did try to throw downfield, he couldn’t plant on his ankle and sailed many of his passes, resulting in some wild incompletions and a three-interception day. Roethlisberger took Week 16 off and returned in Week 17, but his numbers were unimpressive, as he went just 23-of-40 while throwing for 221 yards. A guy who was previously averaging eight yards per attempt could only get to 5.5 against the Browns. And if Pouncey doesn’t play on Sunday, just one of the five opening-day starters for the Steelers on the offensive line (left guard Chris Kemoeatu) will be in the same spot for the team’s first playoff game. With Mendenhall unavailable to block on passing downs, this could be a nightmare for pass protection.

That depends, though, on which Broncos pass rush shows up. Remember when that big winning streak came on the backs of rookie sensation Von Miller and a dominant pass rush? Well, it’s gone missing. Miller tore ligaments in his thumb against the Chargers and missed the Week 13 shootout with the Vikings; since then, he’s played with a huge cast on his hand. In the ensuing four games, Miller has just one sack, and he was benched during the Week 17 loss to the Chiefs after failing to stop Dexter McCluster from scoring the game’s lone touchdown. During the six-week stretch after Denver’s bye when both Von Miller and fellow pass rusher Elvis Dumervil were healthy, the Broncos went 5-1, held opposing pass offenses to 6.6 yards per attempt, and sacked them on 7.9 percent of dropbacks. In the five subsequent games after Miller’s injury, the Broncos allowed opposing passing attacks to average more than 7.6 yards per attempt and only sacked quarterbacks on 6.5 percent of their dropbacks.1

Expect Arians to build his offense around quick throws for Roethlisberger in an attempt to mitigate the pass rush, but the Steelers will need to hit on a big play or two downfield to score points. Mike Wallace is certainly up to the task, but if Roethlisberger is inaccurate and the Broncos pass rush comes to play, we might see a lot of punts.

You really like talking about injuries, right? Great! Let’s do that some more. The Broncos’ five starting offensive linemen didn’t miss a single game all year, but right guard Chris Kuper suffered a gruesome leg injury during the Chiefs game on Sunday, fracturing his tibia. He’s obviously done for the year. This week, the Broncos signed former starting right tackle Ryan Harris, who was supposed to play for the Eagles this year before undergoing back surgery in August. Harris hasn’t played all season, but he could figure into the game plan in a limited role on Sunday. Fullback Spencer Larsen also suffered a knee injury, and he looks doubtful to play on Sunday. He’ll be replaced by Austin Sylvester, who was signed off the practice squad this week and will be making his NFL debut as the team’s starting fullback.

That should really hurt the occasionally dominant Broncos running game, especially when running up the gut. Denver runs the ball up the middle or at either guard slot 67 percent of the time, which is tied with the Steelers and Browns for the highest rate in football. Now, they’ll be doing that with two replacements in the middle of the field. Meanwhile, the Steelers run defense has been at its best against running plays in the middle of the field. We hope you like punts!

The biggest story surrounding the Broncos offense these days is the idea that the league has figured out Tim Tebow. His numbers are down a bit during the team’s current three-game losing streak, but it’s not that the defenses of the league are playing Tebow in a dramatically different way. Instead, the biggest change between the Tebow from November and the guy who has scuffled in recent weeks is his spirit of giving. During his first six starts, Tebow threw one interception and fumbled five times, losing one of them. That was unsustainable. In his final five starts of the regular season, Tebow’s thrown five interceptions and fumbled eight times. The opposition has recovered five of those fumbles, one in each game. In short, Tebow went from offering up two turnovers in five weeks to two turnovers per week. If he arrests that trend, the Broncos might be able to turn this game into a field-position war.

And that brings us full circle to the point that we’ve been discussing all year with the Steelers defense: their weird inability to force takeaways. At the season’s midway point, we noted that the Steelers had just three takeaways through eight games, the lowest total in league history. During the final eight games of the year, Pittsburgh actually forced the other team to cough up the ball 12 times, a roughly league-average takeaway rate.2 Of course, a historically low first half and an average second half produced just 15 turnovers on defense, the fewest of any team in football. A year ago, Pittsburgh forced 35 turnovers, which was good for third in the league. There’s no reason to think the Steelers will be totally unable to create turnovers because of what happened in the first half, but there’s also not any strong evidence suggesting they’re the ballhawks from 2010, either.

These are two roughly similar units, but again, the context will remove Pittsburgh’s biggest advantage. The Steelers are excellent on kickoffs, with Shaun Suisham averaging 66.5 yards per kickoff and converting 38.9 percent of his kicks into touchbacks. That’s not bad, but this is happening in Denver, where the touchback is essentially de rigueur. Consider Denver kicker Matt Prater. On the road, he’s produced touchbacks on 18 of his 36 kickoffs, for a touchback percentage of an even 50 percent. Not bad. In Denver? Just three of Prater’s 33 kicks have resulted in a return. That’s a 91 percent touchback percentage. Suisham’s touchbacks are more meaningful in a context where they’re less likely to happen; even a terrible kicker is likely to boot the ball out of the end zone in Denver.

Both kickers have been below-average on scoring plays; Prater had a few notable kicks from long distance during the Denver winning streak, but he’s also just 3-of-7 from 40 to 49 yards. Denver’s real source of strength has been on punt returns. The team dumped leading returner Quan Cosby, who averaged just 10 yards per return, two weeks ago. Eddie Royal and Eric Decker have combined to average 18.2 yards per return on their 18 attempts, so expect them to handle the duties during the postseason.

If the Steelers get a couple of gifts from Tebow and pick up two short fields, Denver’s chances of winning are essentially nil. Otherwise, this should be a very competitive game, thanks to the injuries on Pittsburgh’s side. This game feels like it will either be a Pittsburgh blowout or a close Denver victory. In the interest of keeping things interesting, let’s try the latter. Denver 13, Pittsburgh 10