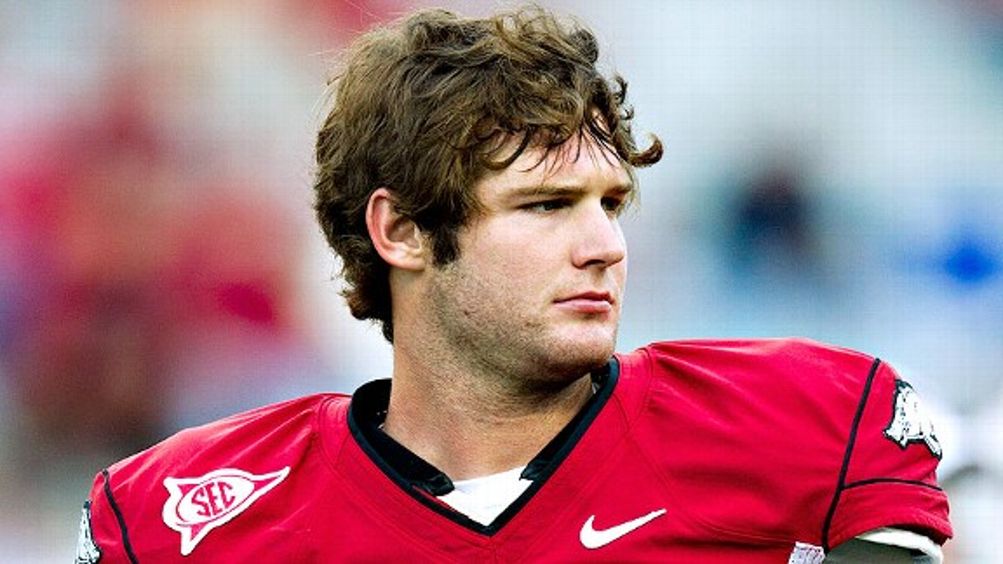 Don’t think I’ve forgotten you. Your state has a complicated identity and your football team is complicated, top 10 in the nation but resigned to receiving the sixth- or seventh-most media attention in its own conference. And for you Natural Beauties, matters of the heart are complicated with all these quarterbacks from goddamn Texas — Ryan Mallett and Casey Dick and Clint Stoerner. With that pretty boy Matt Jones who thought he was better looking than you are, who thought you should buy him cocaine. Don’t even get you started on Mitch Mustain, who thought he was too good for his native haunts and decided to manifest a destiny of riding the pine in Los Angeles. You’ve noticed how many of my hunks come from the SEC,2 and you’ve been wondering if you would be ignored once again. Well, I wrote the book on your state, and I’m back with 250 words of tall, dark, tantalizing Tyler. He picks out those receivers and cocks that arm and it’s as simple as pass-and-catch, and now’s the time to make your pass, darlings, and catch this rugged triggerman in that sweet Arkansas simple life you’ve been dreaming of all season: a cabin in the Ozarks, a log in the fire, a pan full of biscuits, the Razorbacks on the radio, and a bed full of Tyler. Pig Sooie!

Clemson at Georgia Tech — This Paul Johnson offense is supposed to be an equalizer because it’s impossible to prepare for. A scout team can’t duplicate the precision of a Johnson-coached triple-option and nobody wants to cut-block in practice. But other things you can’t duplicate in practice are Sammy Watkins and Dwayne Allen. If this game were at Death Valley East, it wouldn’t be super-interesting, but in Atlanta, who knows? In close games, whether or not Tech completes the surprise downfield passes it spends a quarter setting up can be important. If the game doesn’t become a track meet held for the purpose of allowing Clemson to show off all its superb athleticism, then what happens when Tech throws — pretty damn important. I find it interesting that Clemson scheduled Wofford, which also runs the triple-option. The good news for Clemson is that it saw this attack live not long ago. The bad news is that Wofford gave the Tigers all they wanted. I’d be more psyched if Georgia Tech hadn’t been stifled by Miami last weekend, but I’m still in a state of partial psychedness, which is hard to differentiate from the feeling you have right after a hot shower and a close shave.

Georgia vs. Florida — One team won its first four games of the season and now appears out of the Eastern division race, and for the second consecutive year is attempting to play football without the forward pass or a running back who’s bigger than anybody’s corners. The other team lost its first two games and now appears to be the front-runner to get to Atlanta. We all know the recent history. Florida has won 18 of the past 21. (Forgive me for making sure to mention that. What else do I have right now?) The Bulldogs always lose this game. It doesn’t matter whether they’re better, which they appear to be this year. A tremendous receiver like Terrence Edwards will drop a pass (2002); Ray Goff and Jim Donnan will drop down and hide behind the water coolers, hoping Spurrier doesn’t find them and humiliate them (the ’90s); Urban Meyer, in the midst of a historically bad offensive year for Florida, will use the off week to devise Threebow — credit for coining this term goes to the author Michael Connelly — a system that masterfully switched John Brantley, Jordan Reed, and Trey Burton in and out at quarterback last year. So how about this year? UGA has a better quarterback by a long shot. Aaron Murray’s a tough, talented kid, while Florida has two true freshmen and Brantley, whose secondary trouble is a bum leg and whose primary trouble is not being a very good football player. UGA has a real SEC running back in Isaiah Crowell. What Florida has is home-field advantage. Sort of. The game is in Jacksonville, but as the Head Ball Coach always used to say, “What if we had to go play them in Atlanta every year? Would that seem fair?” Good point.

Baylor at Oklahoma State — Two awesome athletes on display here in Robert Griffin III and Justin Blackmon. At the time of this writing Blackmon still might not play, but it would be very surprising if he didn’t. Also, there’s a chance Oklahoma State could lose, which is interesting to a lot of teams who need the Cowboys out of the way. I mean, if Texas Tech can beat Oklahoma in Norman, anything can happen. The Big 12 is awesome, isn’t it? It’s sad that the SEC is stealing A&M, and that A&M wants to be stolen. While comparatively watery conferences like the ACC and Pac-12 grow more watery by expanding, the Big 12 withers. Don’t be sad, John. Chin up. You’ve got the cute waitress for once. You’ve got your Aussie-Tizers. The Foster’s is cold. Baseball’s almost over for the year. College basketball is coming, and the NBA, thankfully, isn’t.

A new segment! This far into the season! Well, the content isn’t new. In the absence of hope for a good season from my Gators, I’ve taken to wishing for a fresh squad to claw into the Big Dance. In last week’s Simple Math we took a look at the contenders, and that quickly we’ve lost one — Wisconsin. Congrats to the Spartans. And to the officials, who impressed with the circumference of their testicles by overturning that Hail Mary call and ending the game. Almost restores my faith in replay review.

So we’ve got the SEC winner gobbling up a spot, which is only fair, and then we’ve got a spot up for grabs, which looks more and more like it might go to a team that isn’t accustomed to appearing in national title games. Let’s see just how long it’s been for these guys.

Clemson — 1981. Thirty years ago the Tigers beat no. 4 Nebraska in the Orange Bowl and claimed the AP’s top spot. Not forever ago, but I don’t remember it, because I was 5. It’s way too early to begin fretting about whether the BCS Supercomputer would favor an unblemished Clemson or an unblemished Oklahoma State, but if it came down to those two, the ACC championship game would be huge. One would think. No title game for the Big 12.

Stanford — 1926. They won that thing (well, a share of it) under Pop Warner, says the World Wide Web. How about that? And get this: In 1940, they won all their games and then defeated Nebraska in the Rose Bowl, but were voted no. 2 in the AP poll, a poll that was released before the Rose Bowl was played. Got to love those old-timers. For my money, Stanford needs both Clemson and OSU to lose, but I don’t have enough money to have a say.

Boise State — I think they won one as a junior college. I’m not going to waste energy making a joke about that.

Kansas State — Never. And it would be irresponsible to suggest that might change this year, because they’re about to play a bunch of good teams.

Oklahoma State — Never. Doesn’t it seem, for some reason, that since the Sooners will enter Bedlam with a loss, they’ll wind up beating the Cowboys? In your gut, don’t you feel that somehow there’s a cause and effect there? Hard to explain, easy to feel.

South Carolina — Nope, no titles. Still hanging on to the bottom of this list. Chances getting slimmer as I type each word of this sentence. And slimmer. And slimmer.

The Book: All We Need of Hell
The Author: Harry Crews
The Sport: Handball & Cycling
The Dope: Gainesville hasn’t been loads of fun lately, with the 2011 football season relegated to one laborious spring practice, and us fans watching intently for those occasional flashes that allow us to believe this Muschamp experiment will break the way of Meyer rather than the way of the Zooker. Gainesville is hot and an hour from either coast, and with each passing year the university grows more nerdy. Don’t despair. What we do have this week is a book set in Gainesville that’s positively packed to the hilt with fun. But “fun” isn’t the right word. Let me admit that right up front. I felt genuinely scandalized during parts of this book. I didn’t show it outwardly, but somewhere deep under my bodice, it happened. Do you think that’s an easy thing to do? To scandalize John Brandon? If you know Crews, then you know what you’re in for. He’s fearless. To commandeer a line from one of Padgett Powell’s stories, this book is so far gone on rancid testosterone as to be sweet. Hard to describe, but here’s an example: There’s an epigraph from an Emily Dickinson poem, and then you turn the page and Chapter 1 begins with the main character trying to prolong sex by imagining himself trapped in a concentration camp, imagining piles of eyeglasses, and imagining how he might kill someone with a wire to steal a moldy potato. So “fun” is too simple. It’s more that there’s something exhilarating in the ballsiness. It’s like a literary comic book for 40-year-old dudes in search of lost id. You want a nubile Alabamian philosophess who subsists on apples and cocaine? Crews has that for you. You want fisticuffs, everything from spinning karate kicks to the old testicle clutch? Crews delivers. A lawyer named Jert and a pro football player named Tump? Yupper. There’s still time for some of the usual elements — whiskey, musing on one’s father. There’s also Zen. And a Winnebago. And the whole thing is animated by the main character’s indomitable attitude, which I can’t help but describe as, well, positive. It’s about a man fully and closely in touch with the wreckage of his life and in possession of the bravery to push on through it. Hope that sounds good to you.

Previously from John Brandon:
USC vs. Notre Dame and Seven Unlikely National Championship Contenders
Oklahoma vs. Texas, a Letter to Les Miles, and a Hard-To-Get Hunk
Tide vs. Gators, the Problem With UVA, and a Nice Steak in Tucson
Hunks, Books, and Clemson vs. Florida State
Open Season
Dear Coach Pelini