The Garden of Good and Evil 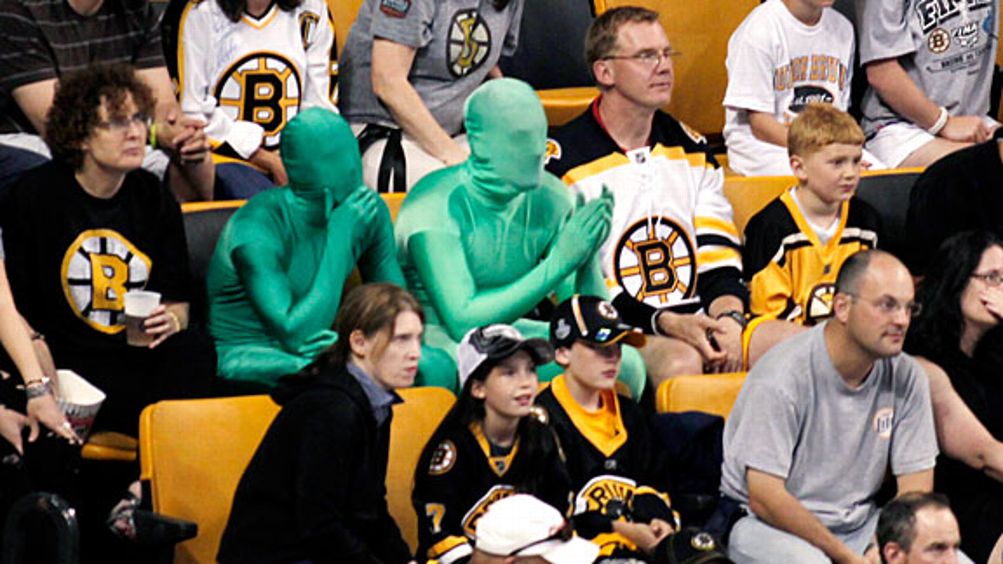 Hockey fans are passionate of spirit, encyclopedic of mind, and really easily offended. Never is this on display more sincerely than during the Stanley Cup Finals. I’ve been steadily compiling a list that will one day become a hockey version of “Fifty Nifty United States” called “Twenty Venting Hockey Complaints.” (It’s also a drinking game for reading hockey blogs and/or dying of cirrhosis.) Here’s a start:

This year’s series between the Vancouver Canucks and the Boston Bruins has been particularly hostile, simmering with the kind of mutually assured hatred usually found between more frequent divisional rivals. The list of incidents that have occurred in only five games include, but are not even close to limited to: one bitten finger (no suspension); one scary, open-ice hit (four-game suspension); numerous fingers waved in various faces in taunting reference to the original bitten-finger incident; accusations of diving, slashing, spearing, submarining, and crosschecking; actual instances of diving, slashing, spearing, submarining, and crosschecking; complaints about officiating; weird emo goalie nonsense; the comparison of the Sedin twins to Thelma and Louise (a Mike Milbury special); ongoing passive-aggressive sniping between the two head coaches; and a pugilistic goaltender. History Will Be Made!

Amidst all this, in five games the Boston Bruins have given up only six goals to Vancouver. Zdeno Chara, Dennis Seidenberg, and the rest of the Bruins defense have limited the top three Canucks — Henrik Sedin, Daniel Sedin, and Ryan Kesler, who together were averaging more than three points per game in both the regular season and the playoffs — to just one goal and two assists combined.2 They have killed off all but one penalty against a Canucks power-play unit that came into the series with 17 power-play goals in 18 playoff games. They have scored as many shorthanded goals in one game (2) as Vancouver allowed during the entire 82-game regular season.

The Bruins’ goaltender, Tim Thomas, has held the Canucks, who entered the series with the league’s most well-oiled offense, to one shutout and two games that remained scoreless into the third period. One game has gone into overtime. The Bruins have won handily twice, 8-1 and 4-0, and forced Vancouver to yank proud goalie Roberto Luongo, who later bristled when a reporter informed him Canucks fans watching a simulcast of the game on the JumboTron at Vancouver’s Rogers Arena had roundly cheered the move. (Luongo’s response: “Next question.”)

In short, the Bruins have neutralized Vancouver’s offense, exploited its defense, and rattled its goalie while riding an in-the-zone goalie of their own. They have turned all the Keys To Victory and performed all the right Things To Watch. They battled back from down two games to none to tie the series 2-2, and they did so decisively. And still, after another 1-0 loss on Friday in Game 5 back in Vancouver, they find themselves trailing three games to two and facing down hockey’s biggest stomach-spear: letting someone else raise the Stanley Cup inside your building.

In many ways the Green Men, the Vancouver Canucks’ writhing, jiving, Carrie Underwood sign-ing semi-official mascots, are shiny Spandex-unitarded distillations of the team itself. They are entertaining and irritating, derivative but inventive, silky and showy, and a little too satisfied. They are very often found upside–down.

Though they came to Boston with much fanfare, with a 2-0 series lead and the potential for a sweep,3 they seemed out of their element once they arrived. As the Canucks in Games 3 and 4 struggled to complete even the simplest of passes, went oh-fer on their power plays, and looked generally unlike the team they’d been all season long, the Green Men were just as helpless. In their comped seats4 they curled into that universal what-am-I-watching pose known to any fan: elbows on knees, chin in hand. They resembled slumping glowworms, the agony of defeat on acid.

By the time the final buzzer sounded to end Game 4, they were gone. “I walked into a bathroom and they were in there changing,” one TV cameraman later told me. “They had a cop in there with them.”

The Green Men’s body language in Game 5 is anyone’s guess, as NBC’s production team went to great lengths to avoid capturing so much as a green wriggling toe. The Canucks, who had been physically dominated in Game 4, turned things back around. Alexander Edler alone recorded 10 hits. Roberto Luongo, delivering his second shutout of the Finals, certainly looked better than he had in Boston. Numerous reporters, trying to divine the reason for his bounce-back, asked Luongo about a walk he took along the Vancouver seawall before the game. Seriously, Google “Luongo seawall” and prepare to feel bad for everyone involved. I can no longer look at the man without hearing the smooth stylings of Toad the Wet Sprocket in my head.

While the Bruins have effectively knocked the Canucks off their usual game, Vancouver deserves credit for having adapted, even if some might find it an ugly evolution. Three of Vancouver’s biggest pests — Burrows, Maxim Lapierre (“someone should go fix his wagon”), and the vaguely unhinged if whimsically animated Raffi Torres — have been the ones responsible for the team’s three game-winning goals.

Don’t think the Bruins aren’t doing just as many of the unsavory little things on their end: Chara, Milan Lucic, and Brad Marchand are no strangers to strategic chippiness themselves,5 and I’ve noticed a lot more of enforcer Adam McQuaid lately. And then there’s Thomas, who has never been shy with his might. If a Gordie Howe Hat Trick was, famously, a goal, an assist, and a fight, there’s a Tim Thomas Hat Trick to be named for the physical goalie, who in Game 4 turned in a shutout, a monster slash, and a dropping of gloves. (He’s expected by many to earn the Conn Smythe MVP trophy, win or lose.)

On the Vancouver side, Burrows’ and Lapierre’s reputations as troublemakers precede them, and the success of these players drives many critics especially crazy. But it’s essential playoff hockey nonetheless. After all, the Sedin twins are hardly the first stars to have been shut down in the Finals.6 For this reason it can be difficult for teams that win the Presidents’ Trophy for best regular-season record to go on to win the Cup. The game that gets you there isn’t always the game you’ll need.

Speaking of the Presidents’ Trophy, this fun fact keeps cropping up: The last two times a Canadian city has hosted the Olympics, Montreal in 1976 and Calgary in 1988, the local NHL team has gone on the following year to earn both the league’s best regular-season record and the Stanley Cup.7 Vancouver, where the Canadian national team won Olympic gold last winter with Luongo in net, is one win away from becoming the third. If it does, it’ll be the first Canadian team to lift Lord Stanley in 17 years.

One might assume that Canada is by default gung ho Canucks. But that’s not exactly the case. There are far too many shifting and crosshatched alliances within Canada, from local NHL team to Quebecois quotient, for any national support to emerge. And while the Canucks may be outwardly Canadian in geography and name, many Canadians see Vancouver as its own entity way out west — why, it doesn’t even get that cold there! There’s also the “issue” of the stereotypically fickle yet incredibly loud8 Vancouver fans, who can rankle old-timey Original Six snobs from, say, Montreal the way Miami Heat supporters rile up NBA fans.9

And, at least until the Finals, there was always the turnoff that the team’s three leading scorers weren’t Canadian but — gasp! — an American and two Swedes. Before Game 4 in Boston, I heard one reporter ask Daniel Sedin about the significance of the Olympics-Stanley Cup connection. “Well, that’s probably more of a Canadian thing,” he responded diplomatically, having played for Team Sweden himself.

The Cup will be in the building tonight, as they say, but that doesn’t mean the Bruins are going to let Vancouver raise it up in front of them. Neither team has lost a game at home yet, and if that constant holds then everyone will find themselves piling back onto the plane for another long cross-country flight back to Vancouver for Game 7. (Unlike the NBA, the NHL maintains its 2-2-1-1-1 format even in the Finals.) As sickening, cowardly, spineless, and disgraceful as this series has been, it’s also been pretty freakin’ great — wholly unpredictable, skilled yet physical, and viscerally crackling with rage.

I hope we get seven full games of it. But that’s just me. I’m pretty classless.