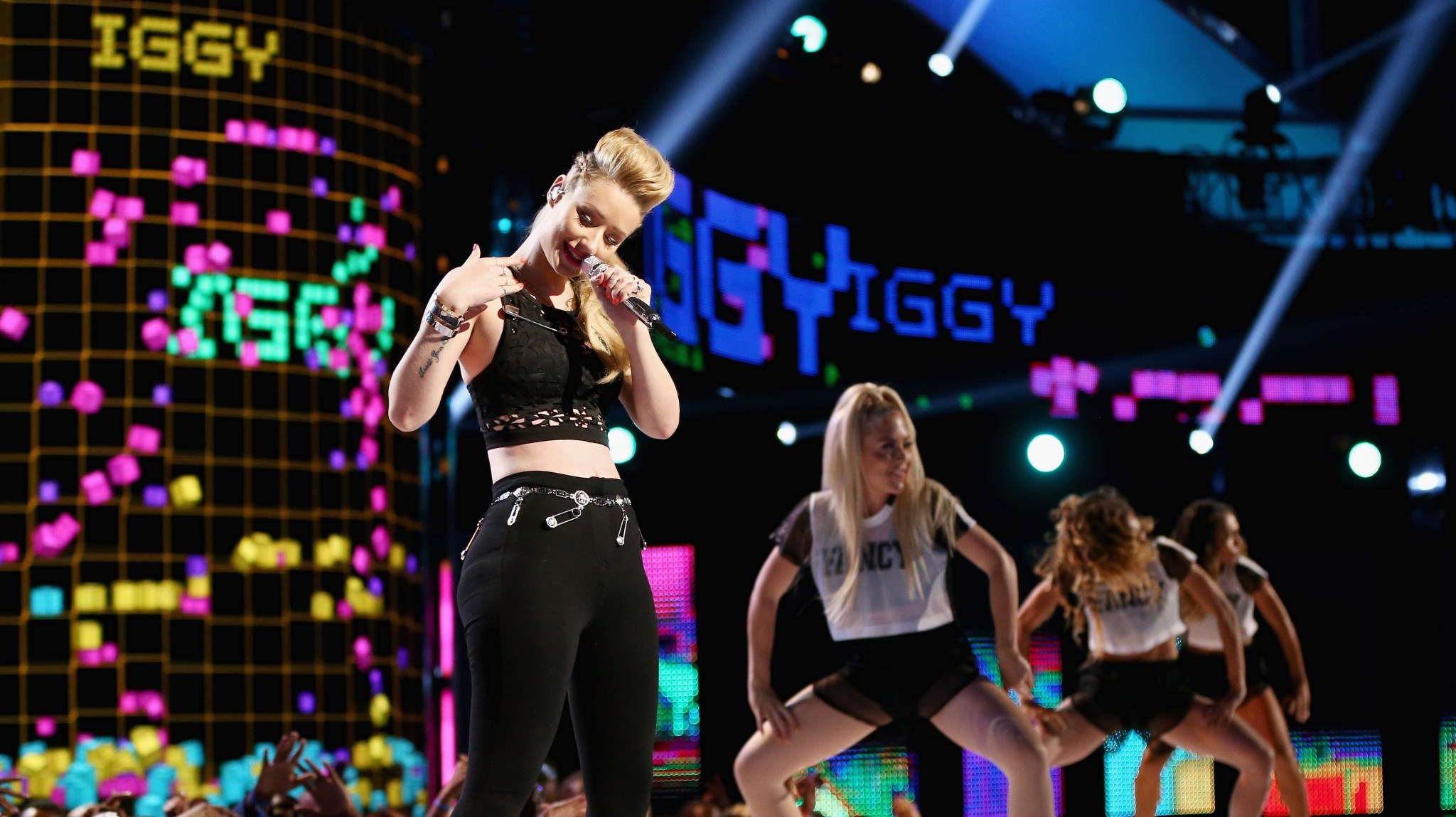 Would we still be talking about “summer jams” as a thing if not for the summer of 2013? Hardly anyone buys into the idea that any single song can be relevant to the whole world at the same time in other contexts anymore. Looked at soberly, the summer jam is an antiquated fantasy, a matter of consequence only to those of us who remember (or think we remember) a time when “Pour Some Sugar on Me” or “Nuthin’ But a ‘G’ Thang” or “Livin’ La Vida Loca” or “Crazy in Love” or “Crazy” poured out of every car window with military precision.

But last year, the summer jam illusion became real. It truly was a season of songs that leaped out of earbuds and Spotify playlists and into a larger world. You didn’t have to enjoy “Get Lucky,” “Blurred Lines,” “Royals,” or “Cruise” to know them. They just barged into your life — in commercials, at the mall, on the phone while waiting on hold — whether you wanted them to or not. It was notable precisely because songs so rarely accomplish this feat anymore.

To answer my own question: Yes, I think we would be talking about summer jams regardless of their real-world relevance. And by “we,” I mean the media. As pop music’s cultural capital has diminished, the conversation about summer jams has skyrocketed. If you survey pop-culture websites — since you’re here, I’ll assume you do — you’ve likely already heard about approximately 124 different jams that could potentially “define” this summer. It’s all too much. Here are 10 of the most serious contenders.

The term “guilty pleasure” has been essentially phased out of existence during the Internet era. At the insistence of pop intellectuals, previously “shameful” forms of entertainment (like pop music, summer blockbusters, and comic books) have been reclaimed and are now rigorously deconstructed. This, on balance, has been a good thing. However, I feel that an exemption should be granted for Iggy Azalea’s “Fancy.” As I write this, “Fancy” is the no. 1 song in the country going on five weeks. Azalea is the most famous Australian rapper since Michael Hutchence. Assuming Azalea doesn’t go White Male in Playboy on us and do something spectacularly stupid to derail her career, “Fancy” is likely to remain in the upper reaches of the Hot 100 well into July and probably beyond. It appears that “summer jam of ’14” status is Azalea’s to lose at this point.

Not feeling at least slightly discomfited when confronted with “Fancy” for the first time hardly seems virtuous. An attractive white woman with an exaggerated vocal style, Azalea takes the pop music of 2013 — the year of “Thrift Shop” and Miley Cyrus’s racially charged VMA performance and zero no. 1 pop hits headlined by black artists — to its logical, queasy (but also really catchy!) extreme.

But this is not the time for a thoughtful think piece on whether “Fancy” mocks or celebrates hip-hop culture. It’s a holiday week! We’re talking summer jams here!

Once you listen to it enough times, the shock of “Fancy” wears off. Eventually you hear “Hollaback Girl” and Animal-era Kesha, the wells Azalea draws from most heavily, as much as Azalea’s wincing “who dat”–isms. Or maybe that’s just my brain waving a white flag. After all, Azalea is also featured on the second-most popular song presently on the Hot 100, Ariana Grande’s “Problem,” shouting out Biggie and Jay Z like Ali G giving dap to “Boutros Boutros Boutros-Ghali.” Azalea’s purpose in “Problem” is to provide the personality that Grande, a big-voiced and squeaky-clean 21-year-old Nickelodeon alum, isn’t yet equipped to provide on her own. The specter of Macklemore lurks elsewhere on “Problem” in that yakkety Benny Hill sax squawk, but the whispered chorus is what (almost) saves it. I hate myself for saying this, but the chorus could actually use a little more Iggy. If she is going to be inescapable right now, you might as well let Iggy Azalea give “Problem” the full Ying Yang Twins treatment.

Sam Smith has a voice like warm milk: For some it’s a soothing balm; for others it’s flat-out icky. So far, every Sam Smith song I’ve heard save one has landed me in the “icky” camp. Still, I think I understand what other people hear in him. His judiciously controlled vocal quiver is ideal for conveying thwarted romanticism — in “Stay With Me,” lines like “I still need love because I’m just a man” and “Why am I so emotional?” sink into Smith’s voice like needy houseflies in half-melted butter. What’s evoked in “Stay With Me” is emotional paralysis as pokey as the song’s midtempo metronomic beat — this poor sap can’t get out of bed, much less achieve a grand emotional release, the presence of a goddamn gospel choir notwithstanding. The power is in what you assume Smith is holding back. But for me there’s no payoff. The only thing “Stay With Me” builds to is a date with a bowl of Häagen-Dazs. (I realize that’s three dairy references in one paragraph, but this song is just that rich.)

What I really don’t get is why anyone would want to hear “Stay With Me” right now. Save that depressive introspection noise for November.

Let’s say you wanted to write the most boilerplate 2014 summer jam imaginable. What would it sound like? For starters, it probably needs to be an EDM track. EDM is young. EDM currently represents the pop zeitgeist. EDM is our nation’s preeminent “let’s pretend life is one big Mountain Dew commercial” music. Lyrically, this theoretical jam should be textually romantic and subtextually party-oriented. That way, it will have the emotional resonance to warrant inclusion on a time-stamped seasonal mix, but won’t be so much of a downer that it can’t be played in large spaces. Summer music, after all, needs to be both personal and universal.

Now, if you were planning on actually writing this song, I’m afraid you’re too late. Calvin Harris already did it with “Summer.”

You have to hand it to Harris — the Scottish super-producer whose incandescent 2012 smash “Feel So Close” remains his least arguable achievement — for hitting the summer-jam bases so squarely. Sure, “Summer” is a somewhat generic “upbeat” dance track, but it’s the work of a natural showman servicing the seasonal needs of his audience. It’s like Will Smith starring in a movie released on July 4 called Will Smith American Flag Alien Explosion.

Speaking of alien explosions, the summer’s meme-iest song is unquestionably DJ Snake and Lil Jon’s “Turn Down for What,” a brass-knuckled bleep-bloop sucker punch that you probably read about 1,000 times on Twitter before hearing the actual song. A recent Rolling Stone article about the arrival of EDM’s supposed “punk” period enlisted “Turn Down for What” as exhibit A.1 The original punks credited the first Ramones album or the Sex Pistols’ early U.K. gigs as their initial inspiration; the flash of inspiration for “Turn Down for What” seems to be Key & Peele’s Season 1 dubstep sketch. At any rate, my money is on “Turn Down for What” going down as the most intrinsically 2014 pop song of 2014.

For those of us living among the faceless, sleeveless hordes of Middle America, the two-headed bro-country ogre known as Florida Georgia Line has been an unavoidable presence for the past couple of summers. The duo’s current hit, “This Is How We Roll,” replicates the formula of last summer’s “Cruise,” juxtaposing banjo licks and Hank Williams (presumably Jr.) references with double-time rhymes and Drake nods. “Roll” also has the same canny marketing in its guest performers, using down-home lunkhead Luke Bryan for country radio and R&B hunk du jour Jason Derulo for pop radio. Somehow they deliver the Cracker Barrel bits (“We cuss on them Mondays / And pray on them Sundays”) the exact same way.

To the average person, talking about summer jams might seem silly or inconsequential. But for profound culture thinkers like yours truly, it’s a way to investigate important questions like What are “the kids” into? and What does this say about “where our culture is headed”? However, there are plenty of songs that get insanely popular around this time of year that don’t make an impression on social media or become fodder for late-night comedians. They don’t mean anything, but they’re sort of everything. They just get played over and over and over, and then proceed to never go away. Meanwhile, the world has not changed one iota.

“Rude” by supremely dorky Canadian pop-reggae outfit Magic! already has inexplicably skanked its way into the hearts of millions this summer. “Rude” probably won’t ever end up being the no. 1 song on the Hot 100, but it’s the sort of milquetoast puffery that ends up lingering in the Top 20 for months, and then showing up in regular rotation on adult-contemporary radio for years, like some devil spawn of Shawn Colvin and “What I Got.” I hate this song, but I also can’t really hate it. The guitar solo at 2:34 might be the greatest best-worst musical moment of the year so far.

Here’s another perfectly inoffensive song that’s really popular and also impossible to write anything interesting about: Nico & Vinz’s “Am I Wrong.” A Norwegian duo originally known as Envy, Nico (he sings the second verse) and Vinz (he’s on the first verse) already established their summer-song bona fides in 2013, when “Am I Wrong” went to no. 2 in Norway and Denmark. The song is currently at no. 4 in this country, and it’s probably the best-crafted record currently in the Top 10, with its simple but elegant guitar lick, subtle brass accents, and drums that nearly drop out and then reappear to lift the chorus.

The darkest horse of the “summer jam of 2014” sweepstakes might be Ed Sheeran, previously best known in the States as a downbeat ginger serenading a drug-addicted prostitute in “The A Team.” If that song was Sheeran’s Taxi Driver, this summer’s “Sing” is his Wolf of Wall Street, a sex-and-drug-fueled one-nighter with an ingratiating acoustic-guitar hook that functions as a surprisingly credible callback to Justin Timberlake’s “Like I Love You.” (Genuflect in the direction of producer Pharrell Williams.) Will anybody care about “Sing” in six months? Who knows? Who cares? Just praise the summer and pass the margaritas.

Hear the Grantland staff’s personal picks for song of the summer on our 2014 Summer Jams Playlist.