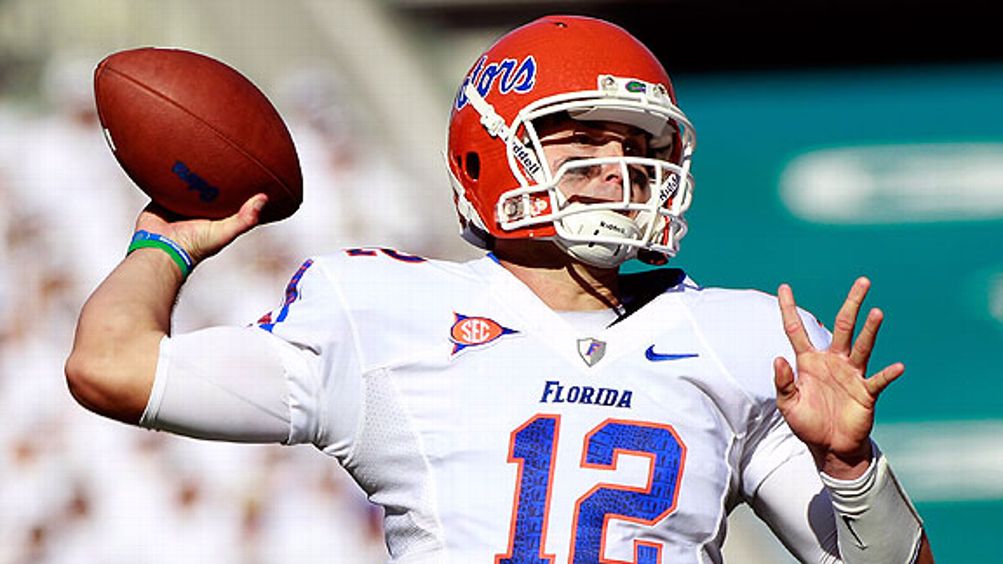 In my last post, Letter to a Coach ran long and unaccompanied, and so this week I’m making a special effort to showcase the diversity of the offense. I don’t feel like talking about the opening weekend’s games. You know what you need to watch. I’ll only mention (for people outside SEC country) that LSU’s losing starting quarterback Jordan Jefferson is not the fatal blow you might assume it to be. Jefferson is a career underachiever, and his backup, Jarrett Lee, is also a senior and, while not as smooth an athlete as Jefferson, possesses moxie. So never fear, the LSU-Oregon game will still be great.

Hunk of the week

You’ve had enough of spending whole days at the salon, of picking up salads at Panera instead of sitting down and enjoying the Alice Springs Chicken and a Foster’s, of burning away afternoons in the tanning bed and then picking out that perfect sexy-but-not-slutty ensemble, only to go out on the town with your man and have him check out every other girl in sight. None of that with John Brantley. If you’re his primary, he’ll lock onto you and stare, stare, stare, come hell or high water. It’ll be like those other gals don’t even exist. John needs confidence, ladies, and between your stand-by-your-man ways and Charlie Weis’ pro-style offense, he’ll have quite the support system. Nab this bruised beefcake while he’s low, like a stock with solid fundamentals, before he shows why he was once chosen as Gatorade Player of the Year. He’s got a golden arm, an orange helmet, vanilla quotes for the media, and a heart full of red, American blood. Be the gal to get that blood pumping, something Urban Meyer could never manage to do, and you just might find yourself in the dreamiest two-person huddle in Gainesville.

Floyd’s party aid of choice is alcohol, while Jenkins is partial to pot. Floyd prefers to be busted behind the wheel of a moving car, while Jenkins favors parked cars. Floyd is perhaps the best receiver in college football (Alshon Jeffery, Justin Blackmon). Jenkins is the best corner in college football ( ). The most striking difference between these two players is that one, Floyd, had his services retained by his university after his latest arrest. The other, Jenkins, was booted by new Gators coach Will Muschamp and will be finishing up his career as a student-athlete at Division II North Alabama. The loss of Floyd would have crippled the Notre Dame receiving corps. The loss of Jenkins has crippled the Florida secondary.

Earlier this summer I saw Urban Meyer on College Football Live, fresh off a visit to South Bend, reporting that Notre Dame was getting its football program into the 21st century. The proof he offered was that the Fighting Irish had finally dragged all their old Heisman trophies down from the attic and had dusted off various national championship booty and had improved their training facilities and, in short, were giving recruits the kind of razzle-dazzle all the other schools were giving them. (Nothing to be done about the weather, but be patient — in 30 or 40 years South Bend could be the new South Beach.) I was glad to hear all that, because my view on Notre Dame is if we have to hear about the Irish incessantly even if they suck (proven out over the past two decades), they may as well not suck. That way we can hear incessantly about a decent team.

So recruiting has picked up for the Golden Domers. That’s good, but that’s only half of it. The other ingredient necessary to make the Brian Kelly Incarnation of Hope turn out fulfilled (unlike the Weis Hope and the Willingham Hope and the Davie Hope) is to give star players plenty of leeway. Anyone who’s run a business will tell you, retaining quality employees is every bit as important as attracting them in the first place. A lot of pressure comes with stardom — sometimes a guy needs a drink. And sometimes a guy needs a drink and then remembers he has to run some errands.

Another measure of the high ground has been surrendered in South Bend. Tragedy? Probably not. I’m not convinced many Notre Dame alum were all that attached to it anymore. There’s a distance above sea level at which trees can’t be found, and a distance above the malleable morals of modern sport at which crystal footballs are nowhere to be seen. The high ground, at least several acres of it, has been traded in this case for a dozen or more red zone touchdowns in a year when the Irish face a down-enough schedule that anything is possible. I suspect most ND fans are OK with that bargain. Of course, because of the schedule we won’t be able to tell if Notre Dame is “back” or anything, but it would be interesting, to me at least, to see it reenter the world of the powerhouses. Also, if Notre Dame has a good season, it will be fun to watch how differently it’ll be treated than Boise State, another team with a weak schedule, a team that’s been better than Notre Dame for many years now. For Boise it’ll be, “They lost a game. Get them the hell out of the conversation!” For the Irish, it’ll be, “They lost only one game. Why shouldn’t they be in the championship?”

72 — Number of players suspected of receiving gifts from Nevin Shapiro.

Retention, at Notre Dame, is all the more crucial when you consider what it’s up against in these recruiting wars. Fleets of Escalades, Monsignor. Fleets.

Commonly, when these scandals break (as with, recently, Ohio State) I feel reflexively sorry for current players who will have their college experiences tainted by the transgressions of former players, sorry for innocent guys whose careers will be set back by their rule-flouting teammates. In this case, with Miami, I don’t feel that. I’m sitting here cozily in my booth at Outback Steakhouse, waiting at once on my Bloomin’ Onion and on my sense of compassion regarding the rest of the Miami roster — the unnamed, let’s call them. The Onion’s on its way, the compassion ain’t. Call it a spiritual lack of generosity on my part but if you go baby-penguin hunting, you might get cold, and if you play ball at Miami, you might get in trouble. I say the following without any judgment, but as an easily observable fact: It’s been a thugfest down there for quite some time. Has it not? Am I breaking any news here? And believe me, I’m not one who wastes much time shaking his head solemnly at lawlessness — in fact, I’m famously sympathetic to those whose business models fall outside legal boundaries, and I draw little distinction between a pot dealer and a pharmaceutical rep (having had friends in both occupations). But neither am I able to feel sorry for someone who runs around with troublemakers every day of his life in a place known for troublemakers and winds up caught in some trouble. Most of these players had multiple offers. They were recruited by other schools than the U. They sat down with a parent or mentor or whatever, the letters fanned before them on the coffee table, and when faced with numerous comparatively wholesome burgs (note: I said comparatively) such as Athens, Gainesville, South Bend, Happy Valley, Blacksburg, Morgantown, etc., chose a city synonymous with all forms of vice. A place that celebrates vice. A football program that’s taken on the mission over the past few decades of obliterating sportsmanship, that has fostered an identity based around being better than you on the field and worse than you off it. The city of Miami is striking to look at and full of great food, culturally fascinating, architecturally rich — but if you think it’s the right place for an 18-year-old, extremely athletic, impressionable and prime-to-be-corrupted, already half-spoiled kid, then maybe an excerpt of the note you slipped in Junior’s duffel bag when he moved into the dorms went something like: I’m so proud of you. I can’t be with you there in Coral Gables, but I want you to keep this note handy and imagine me right by your side. Abide by these three rules and you’ll have a productive and rewarding time during your college years.

1. Treat the escorts with respect. An escort is still somebody’s daughter. Take them out for something to eat, perhaps some Aussie Cheese Fries. Make sure they’ve got a way to get home safe at the end of the night and don’t ever call them hookers.

2. Change the oil in your Escalade every 3,000 miles. I know you’ll be busy, with practice and yachting and with the escorts and all, but I didn’t raise you to neglect proper automobile maintenance.

3. Don’t spend your whole cash payment at one gun shop. Once you get in there and see the guns in person and hold them in your own hands, you’ll want to own each and every one, but make a simple rule and stick by it: One gun per paycheck.

0 — Number of times Penn State has been investigated by the NCAA. From what I hear.

Books for dudes (and non-dudes?) who are smart but who don’t have the time and/or inclination to sift through the offerings of literary fiction and who could use a solid recommendation or two and who, if they ignore that recommendation, will feel guilty and think a little less of themselves because they know that quality reading improves the quality of the individual

The Book: Poachers
The Author: Tom Franklin
The Sport: Unorthodox hunting/Wilderness survival
The Dope: The stories are well worth your time, particularly the first one, “Grit,” which features a bookie named Roy who is one of the most vivid and convincing villains you’ll come across. The real star of the volume is the title novella, about three illiterate but resourceful brothers who finally run up against the modern world and, more pointedly, against a vengeful, grizzled fish and game warden. The only easily sympathetic character is Kirxy, a shop owner in failing health who tries to raise the doomed orphan boys as his own, and then tries to save them from the bloodthirsty warden. This thing’s an Alabama barn burner with no downtime. Hard to imagine why any male (and some females?) wouldn’t enjoy it. Tombigbee River country, here you come.

Letter to a coach

In order to get off the mullet fence, all you have to do is nothing. Take no action. Make no salon appointment. Just let it grow, bro. Mulletjunky.com sets the standard for a legal mullet at three inches longer in the back than any other part of the head. That’s attainable by mid-October. Listen, just keep smoothing those locks back with two hands and eating a balanced diet and let nature take its course. I am linking your team’s success this year to your hair. I’m putting that notion into the atmosphere, and now it can’t be removed. I’m imposing a superstition on you. (Insert Samson analogy here.) You know you want the mullet, and god do we want it for you. We want your name tacked onto the Permanent List — Earnhardt, Jagr, Stamos, Cyrus, Baggio, Norris, Melrose, Agassi, Amanpour, etc. Stillwater may have been mullet-amenable, but Morgantown is a damn mullet stronghold. Be the mullet and the power and the glory, now and forever. Amen.

John Brandon is the acclaimed author of Citrus County. He’ll be writing weekly on college football for Grantland.