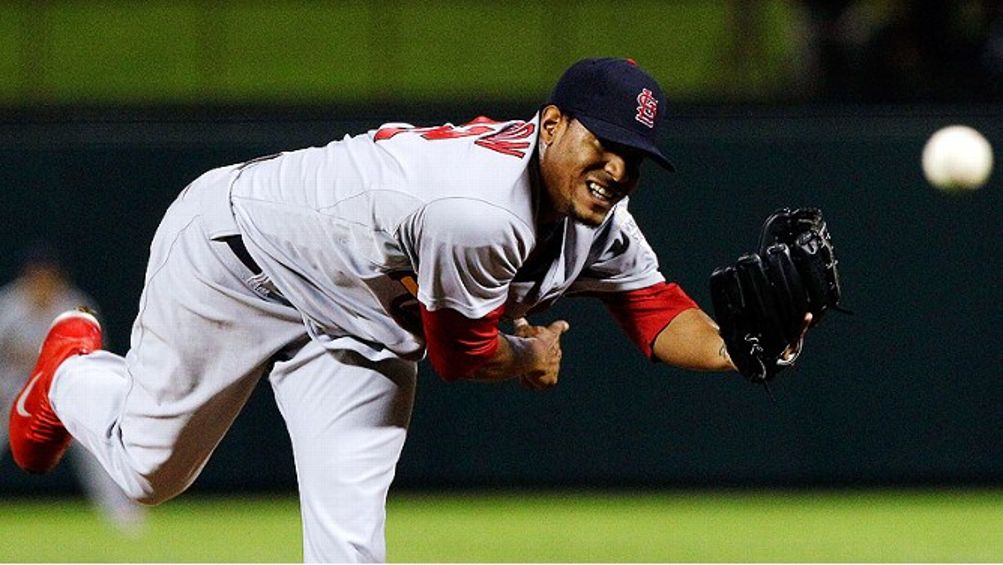 Edwin Jackson was supposed to be a superstar.

Though just a sixth-round pick out of Georgia’s Columbus High, Jackson blazed through the Dodgers system, striking out more than a batter an inning at Double-A … as a 19-year-old. On his 20th birthday, he made his major league debut. It was a gem. Jackson sailed through six innings, yielding four hits, no walks, and one run, and striking out four. He earned his first major league win, beating one Randy Johnson.

The next year, Jackson was named the no. 4 prospect in all of baseball by Baseball America. Though the Dodgers were contenders when Jackson got his big break, they hadn’t won a playoff series in 15 years. Here was the guy who was going to make that happen, an ace in the making, a future Cy Young candidate.

That was nine long years ago. Now 28 years old, an age when many players reach the prime of their careers, Jackson has hit the milestone that can leave a player, his kids, grandkids, and great-grandkids set for life — his first crack at free agency. Just one problem: He’s become the afterthought of this offseason.

Jackson’s long journey from elite prospect to pretty good pitcher no one seems to want is hardly unique. Year after year, scores of can’t-miss young arms do, in fact, miss. Injuries, sharp drops in velocity, or just plain losing it have been so common among pitchers, those woes led to one of the most memorable mottos in baseball’s stathead community, one that resonates throughout every front office, and informs virtually every decision made by every baseball operations department: There Is No Such Thing As A Pitching Prospect.

TINSTAAPP was a term coined by Baseball Prospectus founder Gary Huckabay back when he and other baseball savants did their debating on rec.sport.baseball.1 It’s not literally true, of course. Roger Clemens was a first-round pick. So were Mike Mussina, Kevin Brown, Roy Halladay, Justin Verlander, Tim Lincecum, CC Sabathia, Josh Beckett, Jered Weaver, David Price, and Cole Hamels. So, obviously, there is such a thing as a pitching prospect who makes good.

But there are far more cases of highly touted young pitchers whose careers either disappoint or never amount to anything. Luke Hochevar was the no. 1 overall pick in the 2006 draft; he now looks like he’ll settle in as a back-end starter. Scott Kazmir looked like a star early in his career, leading the AL in strikeouts on a 2007 Devil Rays team that fielded the worst defense baseball had seen in 50 years; three years later he was arguably the worst pitcher in the league, and is now hanging on by a thread. And those two are relative success stories. Kazmir’s high school teammate Clint Everts, drafted 10 spots higher than his southpaw chum, has never thrown a pitch in the big leagues. Chris Gruler, another first-round pick in that 2002 draft, was a sizzling prospect who religiously followed a long-toss regimen to keep his arm strong and limber; the Reds put him in their system, made him scrap his old routine, then watched as shoulder surgeries ended his career before it could start.

All of those pitchers were drafted in the past 10 years. Go back further and you get Todd Van Poppel, Baseball America‘s no. 1 prospect in 1991; he lasted 98 starts in the big leagues, but finished his career with a ghastly 5.58 ERA. Ben McDonald was as close to a sure thing as you could get, a 6-foot-7 behemoth of a right-hander coming out of LSU, throwing gas and destined for stardom; he had a couple of strong years, but didn’t come close to meeting his monstrous potential. Brien Taylor, the top pick in the 1991 draft and BA’s no. 1 prospect in 1992, never even made it to the majors, typical of an era when the Yankees (yes, the Yankees) could never catch a break.

Why do these disappointments keep happening again and again? How do some of the greatest raw talents God or Allah or Flying Spaghetti Monster ever put on Earth keep coming up short?

One theory put forth by Nate Silver and Will Carroll nine years ago was the idea of an Injury Nexus: Young arms are very fragile and still developing when a pitching prospect is in his late teens and early 20s, making them more susceptible to injuries. The study attempts to ascertain the age at which pitchers might be free and clear of that nexus, a tough goal to achieve. That level of precision aside, many young, highly touted pitchers do break down. That might be because their bodies haven’t fully matured yet, or because their sadistic high school and college coaches have no qualms about overworking them to the point of breakdown. Maybe both.

Sometimes it’s the simple temptations of youth. Dwight Gooden had a good career. A great one, really. But nothing like what he was supposed to be, which was the next Walter Johnson. To win Rookie of the Year at 19 by striking out 276 batters, then win the Cy Young the next season (at 20) with a 24-4 record, 1.53 ERA, and 16 complete games, only to end your career with Jimmy Key on your most comparable list … feh. Maybe Gooden’s downfall was uniquely a product of the ’80s. But other young pitchers have washed out their careers with other vices, and Gooden won’t be the last.

Weigh all of those factors with pitchers’ weird development curves. Some research suggests that pitch velocity might top out as early as age 21, before many pitchers even crack the big leagues. At the very least, we have data to suggest early peaks in overall performance, the occasional Jamie Moyer notwithstanding.

All of these damning examples lead teams to go to great lengths to assemble pitching talent. More often than not, those efforts fail. Sometimes spectacularly.

When Andy MacPhail took over as Baltimore’s President of Baseball Operations in 2007, he made it his mission to assemble a dynamic, young pitching staff that could lead the Orioles to a new era of winning baseball. The O’s tapped Jake Arrieta in the fifth round of the ’07 draft, just days before MacPhail came aboard. A year and a half later, he was Baseball America‘s no. 67 prospect. The Erik Bedard blockbuster trade of 2008 brought a slew of young talent, including Chris Tillman, a 6-foot-5 flame-throwing righty with top-of-the-rotation potential. A year later he was Baseball America‘s no. 22 prospect. Brian Matusz had the shiniest pedigree of all. The lefty was a first-rounder, the fourth-overall pick in the 2008 draft and Baseball America‘s no. 5 prospect by early 2010. Together with ground ball maestro Zach Britton, this foursome offered huge potential, maybe enough to rival the Palmer-Cuellar-McNally and Palmer-McGregor-Flanagan staffs that defined the Oriole Way of the late ’60s to early ’80s.

Nope. In two cases, the pitchers’ fastballs disappeared. Tillman’s heater dropped from its mid-90s peak in the minors down to an average below 90 mph during his ugly 2011 season. Matusz lost 3 mph off his fastball in a two-year span; he was so atrocious last year that he set the all-time record for highest ERA by any pitcher with 10 starts in a single season.2 It’s still early, and there’s a chance that Baltimore’s young pitchers could bounce back. But with the Yankees and Red Sox armed with the talent and riches to win every year, the Rays loaded with young stars, and the Jays slowly building a silent killer, the failure of this generation of O’s pitching prospects could set an already downtrodden franchise back another half-decade.

Maybe the best way to re-cast TINSTAAPP is this: There’s no such thing as a pitching prospect … until he’s no longer a prospect. Teams haven’t been quite as willing to give out huge, early-career contracts to pitchers the way they have to elite young hitters like Ryan Braun, Troy Tulowitzki, and Dustin Pedroia. But once an uber-prospect like Verlander, Weaver, or Felix Hernandez proves he’s matured from prospect to established star, his employer will jump to keep him off the market. That’s why good but unspectacular starters like C.J. Wilson and Mark Buehrle were the best pitching gets of this offseason, and why teams are already drooling over the chance that Cole Hamels and Matt Cain could be fair game in nine months’ time. It’s why the Yankees are reluctant to part with Phil Hughes, even with seven capable starting pitchers on the roster. By the time a pitcher is good enough and established enough to be trusted, your chances of landing him are nearly zero.

Maybe the next generation of pitching prospects will be different. MLB.com rates Matt Moore, Julio Teheran, Shelby Miller, and Trevor Bauer among the top-10 prospects in baseball. Yet the Rays have held on to Wade Davis and Jeff Niemann, the pitching-rich Braves are clinging to Jair Jurrjens, the pitching-rich Cardinals are pursuing Roy Oswalt, and the Diamondbacks dealt for Trevor Cahill and re-signed Joe Saunders. Too many teams have seen too many pitching stories go bad to depend on kids, no matter how promising they might look at the start.

So maybe we’re being too hard on Edwin Jackson. He was a converted outfielder who probably came up a little too early, his employers setting themselves up for disappointment. Of all the pitchers to debut since 1990, only three pitched for more teams before their 28th birthday than Jackson did:

Jackson’s a better pitcher than anyone in that bunch. After that impressive debut, he shuttled from the majors to the minor leagues for three seasons, never fully harnessing his considerable skills. In 2006, he was traded to Tampa Bay. A year later, he finally got a chance as a regular member of a starting rotation … and went 5-15 with a 5.76 ERA. He went 14-11 the next year, but with the same lousy peripherals, the same inability to miss bats.

But his career took off from there. Over the past three seasons, Jackson has been worth more than 11 Wins Above Replacement (per FanGraphs). Only 19 other pitchers have delivered more value to their teams during that span. Yet Jackson continued to get traded, for reasons ranging from his perceived value exceeding his actual value (early on), to salary and service-time considerations (as he approached free agency). The man whom Baseball America ranked six spots above Prince Fielder eight years ago now stands to make $200 million less as a first-time free agent. That would be a shame. Even among top prospects, Jackson’s WAR of 14.0 through his first six full seasons beats more than half3 of the pitchers ranked as Baseball America top-10s in the decade before Jackson’s ’04 entry.

Maybe the five-year megadeal he and his agent Scott Boras hoped to get was always a pipe dream. But if a team does land him on a one-year contract, that would qualify as a major bargain. Edwin Jackson might never become the superstar who could make a habit out of beating baseball’s Randy Johnsons. Given the horrors that have plagued pitching prospects for as long as there have been pitching prospects, he’s still a success story.