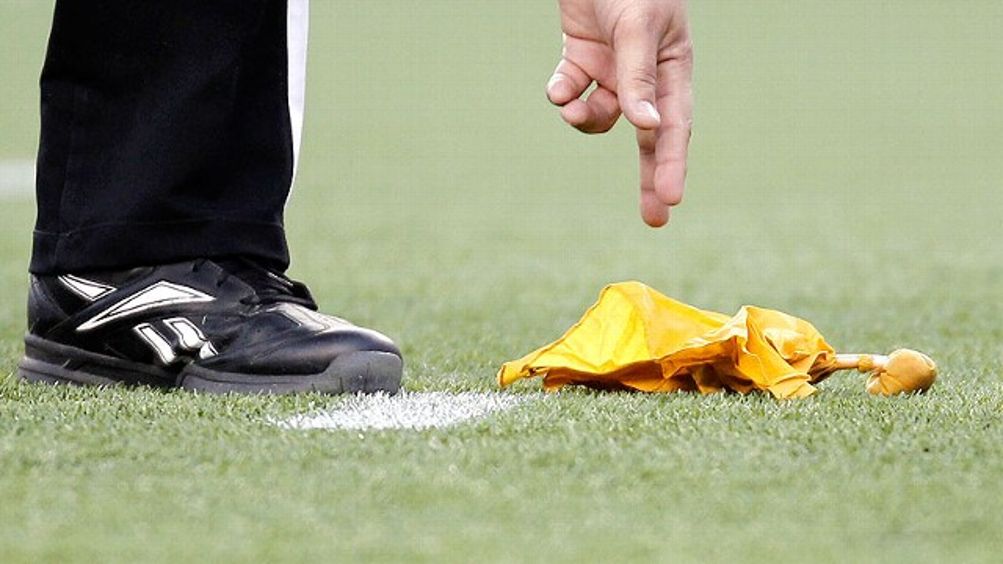 Here’s something I hate about myself: Whenever the NFL introduces a new rule, I’m automatically against it. My natural reaction to any change in the rule book is to assume it’s wrong.1 And yet — despite this reflexive disagreement with every change made by other people — I annually find myself inventing potential rule changes that I’d undoubtedly be against if they were proposed by anyone who wasn’t me.

Here are three rule changes that I would consider wrongheaded, except for the fact that I thought of them …

What If Red-Zone Field Goals Were Decreased in Value?

I’m certainly not the first person who’s ever asked this question; I feel like society has spent the past 30 years trying to find a way to compel teams not to settle for field goals. It’s simply not interesting to watch someone kick a ball off the ground, and it’s problematic that the outcome of so many pro football games is decided by players who could not possibly compete at any other position on the field. It’s the most central aspect of the game that no one looks forward to.

One possible adjustment would be narrowing the goal posts from 18 feet, six inches to a straightforward 15 feet. However, there are a couple of unavoidable issues with this suggestion. The first is that it would require stadium crews to swap out new goalposts whenever a college game was played on the same field; the second is that it would likely decrease long field goal attempts without really affecting chip shots (most NFL kickers seem to hit attempts from under 30 yards straight down the pipe). The more militant option is decreasing the value of short field goals: If the line of scrimmage falls inside the 10,2 any ensuing field goal should be worth only two points.

The Problem With This Idea: There are at least four. The first is that this change would be impossible to get used to (I think it would take me at least 15 years to stop thinking all field goals aren’t three points, particularly since I still sometimes refer to the Colts as playing in Baltimore). The second is that nobody likes non-uniform scoring systems (it makes the game seem more complicated than it already is). Still another is that it rewards offenses for having drives that stall outside the red zone.3 But the most troubling scenario revolves around teams that are down by three late in a game and inadvertently advance the ball inside the 10. Do they then take a sack on purpose? It might come across as farcical.

The Reason This Idea Is Not Totally Insane: There’s no way this rule wouldn’t make football more watchable; anything that encourages teams to go for it on fourth down is a net positive. It would also give bend-but-don’t-break defenses more confidence, since they’d have a greater opportunity to end long drives without giving up any points whatsoever. The fact that some field goals would be worth more than others feels weird, but that type of structure exists in basketball and clearly makes the game better.

Now, the idea of teams losing yards on purpose is hard to justify. It looks bad to retreat. But of course, that already happens on occasion (whenever teams consciously take a safety). Moreover, this awkward imbalance would generate some fascinating strategic decisions: Let’s say any successful field goal from inside the 10 was worth one point less than field goals from the 11. The Green Bay Packers are faced with third and goal from the 7. Is it to their mathematical advantage to try to score a touchdown (and thereby settle for a 2-point kick if they fail), or would they be better off losing four yards on purpose to get an (almost guaranteed) extra point? Would they be better served to throw the ball into the end zone twice (and risk coming away with nothing)? And what if instead of the Packers, it were the Jets or the Browns? I feel like Bill Barnwell could spend the rest of his life worrying about this.

What If Offensive Holding Were Legalized and the So-called “Mel Blount Rule” Were Eliminated?

This would be a radical evolution — but not as radical as it seems on the surface. What I’m proposing is the elimination of two penalties that would, in effect, negate each other: Offensive linemen would now be allowed to hold (but not tackle) defensive pass rushers inside the tackle box; meanwhile, defensive backs could make unlimited downfield contact on receivers, up until the point when the ball is in the air.

The Problem With This Idea: It would contradict some basic ideas about how football is played. It might also affect the running game in a context that’s hard to predict (for example, draw plays might become unstoppable).

The Reason This Idea Is Not Totally Insane: The mere suggestion that offensive holding be legalized will undoubtedly make some people stop reading this column instantaneously. But there would be some massive benefits to the abolition of these rules, one of which could save the game’s future.

What If We Eliminated Overtime During the Regular Season?

Overtime just doesn’t work in pro football. Sudden death is a bad system (and pro kickers are too good for the far-superior collegiate system).5 The extra quarter seems unconnected to the previous 60 minutes. In baseball, the 10th inning seems like the ninth inning — but every possession in an NFL overtime game adopts a conservative walking-on-eggshells posture, and the game inevitably ends on an anticlimax. In the playoffs, you need overtime to make sure one team advances. But during the regular season, I’d actually prefer that OT be eliminated.

The Problem With This Idea: Sports fans (and especially American sports fans) have a philosophical problem with disputes that end in ties. They want clear, irrefutable outcomes.

The Reason This Idea Is Not Totally Crazy: Ties are deeply underrated. They make the divisional races more complex and they can have mixed, multiple meanings (whereas wins are always good and losses are always bad). Yet the larger reason they’re compelling is that they force head coaches to make authentically difficult choices. Should they (or should they not) play for the tie in a deadlocked game against a superior opponent? If trailing by one point after scoring a late touchdown, do you go for a 2-point conversion?

In 2005, Jon Gruden faced this latter situation while coaching the Buccaneers in a game against the Redskins. Tampa Bay went for two and won the game 36-35. Now, this was ostensibly viewed as an ill-advised decision.6 Gruden would have been crucified had it failed. But that not-so-meaningful game remains unusually memorable. It was a far more compelling conclusion than either team winning on a cheap kick.7 And this kind of scenario happens all the time if we remove the possibility of OT. Right now, in any tight game, coaches are compelled to err on the side of caution. The logical move is to always play for overtime, because doing so removes personal culpability (if a team ends up losing in OT, the coin toss takes as much of the blame as the play-calling). But if overtime did not exist, real choices would have to be made. Coaches would have to decide if they were willing to accept a tie instead of risking a loss (and they’d have to face the media scrutiny either way).

As I’ve already noted, I’m not sure how I would feel about any of these changes if another man were advocating on their behalf. My guess is that most people reading this column are likely thinking, These are OK arguments for generally bad ideas. And this might be true — I certainly would not be comfortable in a world where my worldview dictated reality. But the longer I ponder these options, the less they seem wrong. Critics will say that you should not fix something that isn’t broken. But how do we know what isn’t broken?