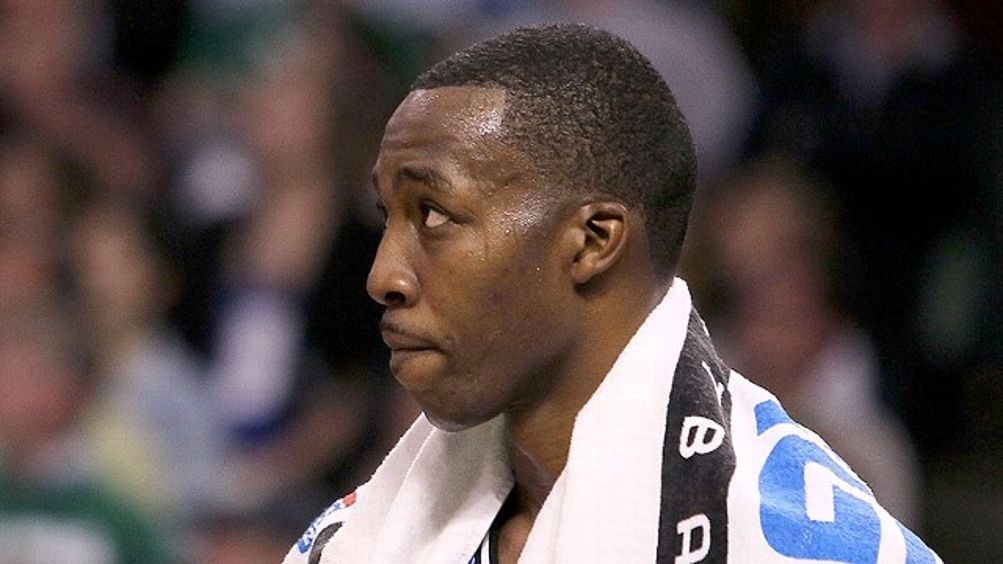 It seems all the spats and forced-feeling reconciliations may be over. Dwight Howard has made up his heart and mind, has finally committed to one of the diverging paths in the wood — one that leads away from Orlando and winds its way north, he hopes, all the way to Brooklyn. He and Deron Williams will become another New York maybe-these-two-guys-can-beat-the-two-guys-in-Miami experiment. I only speak for myself, not for Magic fans at large, but I wish him good luck up there. His departure has been so long coming (in fact, I’m rushing it along now, because though his season is over and irreconcilable differences have been claimed and apparently Dwight is now certain that he wants out, who knows how long until he’s officially off the roster?) that it’s hard not to feel a perverse relief at the idea that the team can move on and there will be no more awkward, phony postgame chumminess to endure.

Sure, the Magic with Dwight are maybe the fourth-best team in the East, and the Brooklyn Nets with Dwight could be about the fourth-best team in the East. Sure, he made a complete circus of this past season, but the NBA is a circus anyway. If you have a huge problem with the egocentrism of the league’s stars, then maybe you like basketball but don’t like the NBA. Not everyone can be Tim Duncan. Not everyone can stay in a small market with his mouth closed doing whatever’s best for his team. I don’t blame Dwight for feeling he has to leave Central Florida. We lost Shaq, of course, so we know the drill: draft big man; get to Finals with big man; come up short; regress as a team; lose big man to big city.

I remember that last year of the Shaq era, people in Orlando were complaining at a fever pitch about his free throw shooting. Maybe not real basketball people, but the general population was making quite a bit of sport of O’Neal’s penchant for bricking from the stripe. Retail outlets orchestrated sales in which the discount was determined by Shaq’s free-throw percentage from the night before. You know those local morning-radio hosts every town has, the ones who are always devastatingly clever and have wacky nicknames and maybe a billboard or two? The ones in Orlando had a ball with Shaq. What I’m saying is that fans aren’t always complete innocents. I think there’s a sort of fatigue that sets in when a team gets close but fails. There’s certainly a fatigue that sets in when you get the sense that a sports star believes he’s gracing you with his continued presence. Like in a relationship that’s run its course, both sides grow reactionary and begin to accentuate the negative.1

So, since Dwight has repeatedly complained about his supporting cast,2 I’m going to take the liberty of delivering a parting shot of snark back at him. Howard, though a superstar in terms of athleticism and rebounding and shot-swatting and bright grinning and willingness to compete in dunk contests and wear costumes, does not possess the boot-on-your-neck competitiveness and determination required of a true superstar. I’m not saying he doesn’t try during games. At times he doesn’t seem fully invested, especially compared with guys like Kevin Garnett or Joakim Noah, but I’m not going to criticize a guy because of his demeanor. It’s a bad road to go down. Neither am I impugning his claim to competitive greatness because he shut it down for the 2012 season.3 What I am saying is that the great ones show their drive to win in the offseason. At the seven-year mark, Dwight’s offensive wherewithal is roughly what it should have been in year three. The reason I’m picking this bone, nitpicking it, even, is because every time during the course of his career Dwight has managed to do anything besides dunk the ball, I have to read an article about how his offensive skills are rounding into shape. I’m picking this bone because for some reason the expectations for Dwight’s post game have been set very low. We fans have been so expectant of an inevitable shift from robotic-absolutely-no-touch-often-wrong-footed-commit-a-charge-or-get-stripped brutishness toward some semblance of smoothness and coordination and awareness that we’ve jumped on anything and held it up as proof of progress.

And I think maybe Dwight has bought into it. The truth is, there’s been about half as much progress as there should have been. He’s bought into the idea that improving his offense is something extra he can do if he has time, going beyond the call of duty — something he can work around his extracurricular activities. The amount of his improvement (call me ungrateful, Nets fans, but you’re going to be saying the same thing in five years) has been, to me, about exactly as little as could be possible for someone who plays basketball most every day. Athleticism is one thing, but leadership and skill are two others. It’s the fact that Dwight has indeed shown flashes of these other dimensions for which we wait and wait that has made the wait so frustrating. He faces up and hits a jumper every now and then. He pulls a spin move to good effect occasionally, but it usually ends with him getting fouled, and we know where that leads. The real problem is crunch time. If he gets fouled he’s screwed, and it’s tough to be a leader when your game is rendered useless at crunch time. He still exhibits a general lack of decisiveness in the post that was cute when he was a kid but has gotten old. The main point is that a true superstar, the type that wins titles, is driven crazy by the weak points in his game. A true superstar turns his weaknesses into strengths or dies trying. And the fact that Dwight has physical skills beyond those of even most superstars makes his slow development all the more maddening. Ask yourself, can it be said of Kobe or Jordan or Bird or Magic that they weren’t quite as good as they should’ve been?

I know I’m an idiot for complaining about a player like Dwight Howard and I know that in his wake will be many dark days in the Sunshine State. I know I’m trying to make myself feel better. I can smell my own sour grapes. Maybe it’s the father in me. I want Dwight to reach his potential. Truly I do. I know he’s not going to be Kevin McHale down on the offensive block, but …. Look, here’s my suggestion: You know that scene in Bugsy where Warren Beatty buys that opera singer’s house with cold cash? Someone — Jay-Z, I guess — needs to do that to Hakeem Olajuwon’s neighbor. If a few hours with Hakeem did Dwight some good, imagine what he might learn in a few months.

It’s the end of another era in Orlando, but it’s also just another shoe dropping. We fans have been keeping hope alive, since the version of the team that included Marcin Gortat and Mickael Pietrus and Rashard Lewis and Courtney Lee was dismantled, mostly through the use of denial. Oh, Otis. I know you’re doing your best. Things get complicated. Things happen. I’m not going to go back and criticize the trades again.4 Instead, let’s look at what we do have. Ryan Anderson, a walking matchup problem — he of the effortless 3-point delivery. Big Baby is fun. Jameer Nelson is tough. Enough time has passed since J.J. Redick was drafted 11th that he’s gone from a sore spot to a plucky veteran who’s easy to root for. An unpredictable oversize Turkish guard. A couple of aging Richardsons who shoot 3s.

And at center, drumroll … Daniel Orton? The Magic won’t be in the lottery, so Anthony Davis won’t become their third freakish center to be drafted with the first overall pick. Anthony Davis will be spending his formative years with some other small-potatoes team before he’s ready for the prime time and bright lights. Howard for Bynum? That seems dead. And I’m not sure the Lakers would even make that trade at this point. It would’ve been a slam dunk a few months ago. Brook Lopez and his bum foot? Sure, why not. Send him on down. If we’re destined to depend on the god of Ping-Pong balls again, bring it on. The god of Ping-Pong balls has smiled on us in the past, and will smile on us again one day.

For now, we kneel to the altar of swished 3-pointers. Let us pray.