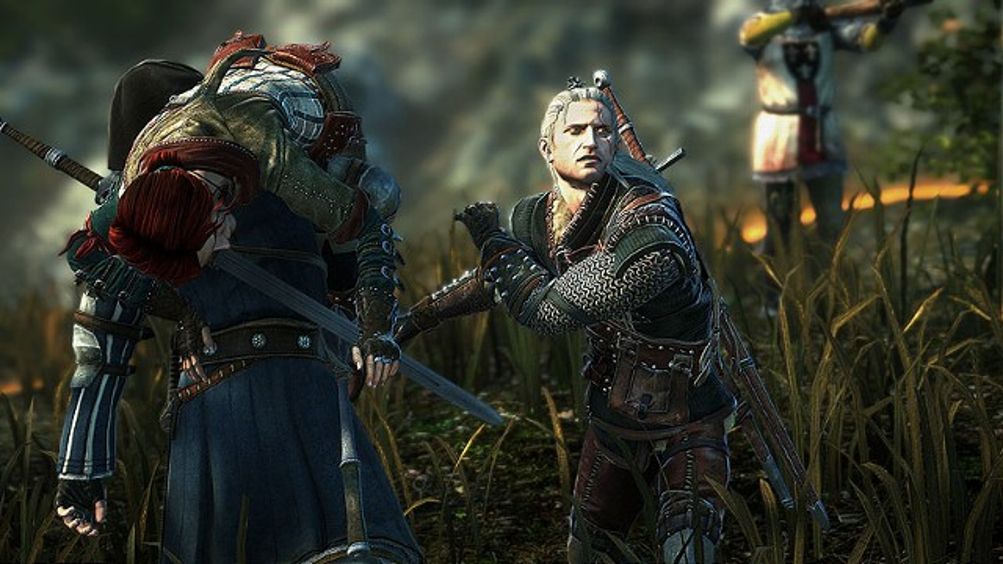 Last year, on a state visit to Warsaw, President Obama was given an executive swag bag by Poland’s wonderfully named prime minister, Donald Tusk. Among the cultural riches that Tusk wanted Obama to take back to 1600 Pennsylvania Avenue were the novels of the Polish fantasy writer Andrzej Sapkowski and the latest installment of the video game that derives from Sapkowski’s work, Wiedzmin 2, or, as it is known here, The Witcher 2. It’s safe to say this was a geopolitical first in about 15 different categories, as well as a heartening indication of the increasingly uncontroversial legitimacy of video games.

If you are primarily a console gamer, however, Tusk’s gesture was an incredibly frustrating piece of news to hear. At the time, The Witcher 2 was available to play only on PC — and only on highly powerful PCs at that. (As one reviewer of the PC version put it at the time: “[Y]ou’ll need a real beast of a graphics card if you want to play this game with all the bells and whistles attached.”) I have one console-gamer friend who was so desperate to play The Witcher 2 that he tried to run it on a six-year-old Dell, which proved capable of getting the title screen up and running before spectacularly crashing. It was, my friend optimistically reported, a very good title screen.

Virtually every review of The Witcher 2‘s PC edition made the game sound like it did to video-game storytelling what Chuck Yeager did to the sound barrier. From 1UP: “one of the most memorable and best written fantasy video games you’ll ever play.” From Eurogamer: “There’s simply no competitor that can touch it in terms of poise, characterisation and storytelling, or the way in which it treats you not as a player — someone to be pandered to and pleased — but as an adult.” From GameTrailers: “This standout RPG is among the best in years, and one that simply begs for multiple playthroughs.”

Earlier this month The Witcher 2 finally made it to consoles. In preparation, I blacked out five days in order to play the game through and give it the attention it deserved. I strongly suspected I’d love it. My day-to-day experience with The Witcher 2, unfortunately, lined up almost eerily with Elisabeth Kübler-Ross’s famous Five Stages of Grief. I played it for an hour on day one (denial: OK, not a great beginning, but I’m gonna stick with you anyway, Witcher 2), three hours on day two (anger: Witcher 2, you have got to do something about these goddamned inventory screens), 30 minutes on day three (bargaining: Come on, Witcher 2, I know you’re better than this), an hour on day four (depression: Why don’t I like this? Maybe I should die?), and 45 minutes on day five (acceptance: I really, really hate this game). It took three decades, but it finally happened: A video game broke my stout, calloused heart.

There are all sorts of reasons why I don’t want to dump on The Witcher 2. Its developer, CD Projekt, is, along with People Can Fly (Bulletstorm), one of Poland’s premier developers. In fact, Poland’s is one of the most promising video-game-making cultures on the planet right now. European games often have very different sensibilities from American games, as can be seen by, say, Metro 2033 or Mirror’s Edge, and this sensibility (quieter, less apocalyptic, and not as credulous somehow) is not always well rewarded in the American marketplace. Another reason is that The Witcher 2 is clearly trying to move away from the established tropes of the fantasy game, the stickiest and most irritating of which is the idea that good-bad morality systems are best showcased via the most droolingly stupid quandaries imaginable: Do I rescue that nice old woman’s cat or do I cut her throat and steal her clothes?

In The Witcher 2, you move through the game doing stuff and talking to people and making gut-instinct decisions on the fly. You’re neither punished nor rewarded by some arbitrary hovering morality system. Decisions, The Witcher 2 welcomingly reminds the player, are often based on incomplete information and have ramifications that cannot and should not be foreseen.1 Obviously, the idea that decisions have unforeseen consequences is not exactly a groundbreaker, but given how many developers live in fear of allowing players to go without a steady dopamine drip of easily understood input, games that allow the player to live with a little uncertainty should be applauded.

I’m afraid my admiration for The Witcher 2 begins and ends there. Far from being the “adult” and compelling storytelling experience I was expecting, The Witcher 2 walks the same weathered path of any number of high- and low-fantasy games. If anything, The Witcher 2, with its bawdy humor and gnarled politics, feels like an odd and not terribly well-executed mash-up of Fable and Game of Thrones. While its English translation is not badly written, I don’t recall, in my roughly six hours of play, any unusually memorable lines of dialogue. Please know that competent dialogue is something I’m normally excited to find in a video game, but the reviews made The Witcher 2 sound like it had been written by some Ren-faire Mamet. Sample line of Witcher 2 dialogue: “Foltest defiled my mother. Now he colludes with Milfgaard.” That’s what I heard, at least. Then I went back and rewatched the relevant cinematic with the subtitles turned on. Oh: Nilfgaard! Either way: dumb name.

The game’s characters, milieu, nomenclature, and overall mood are geriatrically tired. Our grizzled, taciturn, badass-but-with-a-moral-code hero is such a game commonality that he feels downloaded from some central-character database frequented only by game developers. Meanwhile, the “mature” quality of the story, upon which so many reviewers lavished such fulsome praise, seems to be based on the fact that the game’s “good” guys do lousy things and its “bad” guys have their reasons. Again, this is a modest step up from the Snidely Whiplashery of most video-game stories, but that’s all it is.

The Witcher novels are apparently heavily grounded in Slavic mythology, but nothing I saw in The Witcher 2 felt at all distinctly Slavic, other than the low-hanging fruit of a Russian-accented, vodka-drinking troll. Then again, I played The Witcher 2 for only six hours; it’s possible that by hour 10 you find yourself in the middle of a Baba Yaga boss fight. Some Witcher 2 fans will undoubtedly claim that six hours are not enough to give the game its full due. To that I say: If you’ve suffered through six hours of an experience and remain unhappy, you’re either (1) playing a video game, or (2) in prison.

I’d like to make some friendly recommendations to the world’s fantasy video-game developers. For one thing, there’s no such place as England in fantasy worlds, much less an accent-determining English class system. Weirdly, Geralt, The Witcher 2‘s hero, doesn’t have an English accent; neither does his mage girlfriend, Triss,2 or his bumbling narrator friend, Dandelion. So why does everyone else? As Admiral Ackbar so memorably said: “It’s a trap!” Yes, this Englishization of fantasy worlds is one big trap, if only because it unavoidably locks you into a certain high-fantasy Englishness. Developers and casting agencies could show a lot more daring, audacity, and imagination in sonically populating their worlds, especially when the fantasy world in question has Polish provenance, all of which makes the slovenly guards that sound like Ringo Starr and the dwarves with tongue-spraining Scottish brogues that much more frustrating.

Speaking of dwarves: no more dwarves or elves, please, ever again. I realize both are mentioned in Sapkowski’s books; that’s actually part of the problem. Tolkienified speciation is getting near nine decades old, and Tolkien himself must be, with Earl Scruggs, the most imitated artist in history. Let’s all just forget Tolkien happened, shall we? Tolkien is wonderful, yes — so wonderful that his world should be allowed to rest in conceptual peace already. We are sorely in need of some new fantasy tropes, especially in a year during which Skyrim, Kingdom of Amalur, and The Witcher 2 all appeared back-to-back-to-back. We’ve got elves coming out of our pointy ears. Peter Molyneux’s Fable games have their problems, certainly, but his decision to set a fantasy game within an industrial-revolutionary period — and give characters firearms as well as swords — looks more and more like the most interesting conceptual makeover that fantasy video games have been given in recent years. You see? It’s not that hard.

As for what playing The Witcher 2 is like, I’ll say this: Never have I been more content to be a console gamer. PC gamers like to lord over console gamers and claim that console games irrevocably dumb down PC game experiences. The PC Witcher 2 is said to be an unusually rich experience, but my suspicion is that it’s actually just an incredibly complicated experience. Why is a more complicated experience a priori better anyway? Why are more options preferable? Any idiot can design a game with an elaborate interface system, just like any idiot can write confusing, muddled prose. The art of game design, like the art of writing, is to communicate non-simple things simply. Working your way through The Witcher 2‘s inventory system feels like reading a bus schedule in another language on another planet. When the game tries to help you, it often makes things worse. Yes, The Witcher 2‘s tutorial does the impossible: It somehow succeeds in making its already too-complicated gameplay systems harder to understand. It took me six and a half minutes to figure out how to make one potion.

So many of The Witcher 2‘s systems feel off, somehow. For instance, the game, at one point, instructed me to return to someone’s house in the evening. The game lets you speed time via meditation, but you can only come out of meditation during dawn, noon, dusk, and midnight. Thus I meditated until dusk and headed for my evening appointment. When I arrived, the guard said I was too early. I meditated till midnight and tried again. The guard now said I was too late. It’s a small design detail, no doubt, but it’s a telling one, and I should not have been obligated to stand there like a moron waiting for fake time to pass.

The game’s combat feels ropy and insubstantial. The environments, however finely rendered, are rarely convincing and almost always have the feel of digital Skinner boxes. Your character less moves through the world than ice-skates across it; there’s just so little apparent friction between objects and characters and environments of The Witcher 2. The bits of in-game narrative concocted to take place within those environments are often poorly timed, as when your character starts to have a chatty conversation with friends while he’s hacking people to pieces inside a burning building. You travel from “dangerous” areas to “safe” areas by walking 50 feet. The cut scenes never look like anything other than digital puppets standing three feet from one another, gesturing once a minute. I could go on, but I don’t want to. This game is obviously a labor of love, and everyone at CD Projekt deserves immense credit for making such a big, complicated, compulsively playable, and largely handsome game with what I imagine were limited resources. May CD Projekt make many more games. I’m also happy to know that so many people have been and are enjoying The Witcher 2, which I don’t begrudge them. What confuses me, I guess, is why so many look at this game and see a pinnacle rather than a careworn template fast-receding, to which we should be saying, “Thanks, and good riddance.”