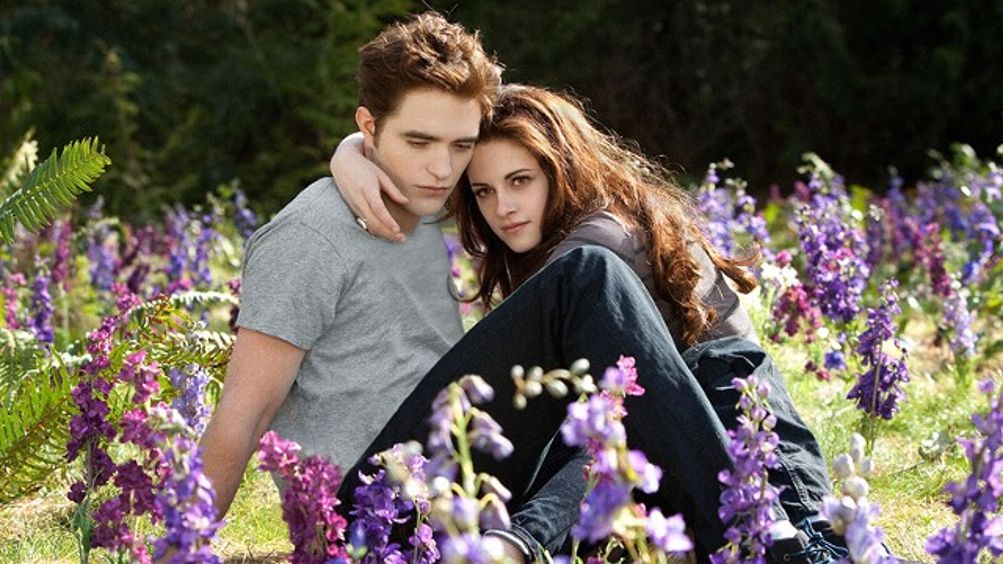 Childhood is not from birth to a certain age and at a certain age
The child is grown, and puts away childish things.
Childhood is the kingdom where nobody dies.”
— Edna St. Vincent Millay/Stephenie Meyer

Unwarranted personal aside: It’s this time last year, give or take a week, and I’m home for Thanksgiving, driving a car full of teenage girls — all relatives — back from the night’s last screening of The Twilight Saga: Breaking Dawn — Part 1. Perhaps you haven’t seen The Twilight Saga: Breaking Dawn — Part 1. It is the most avant-garde of all the Twilights. I guess by that I mean it’s the most pornographic. It’s the one that finally makes concrete the psychosexual love triangle between Kristen Stewart’s millennial Angela Chase and Taylor Lautner’s gym-rat werewolf and Robert Pattinson’s mumblecore vampire by way of fingerprint-shaped sex bruises and a Rosemary’s Baby pregnancy.

They get married, Bella and Edward, and finally go all the way on their honeymoon. During the act, Edward is so overcome that he shatters the marriage bed in a spray of splintered wood and down feathers. Determined not to lose control again, he suggests they instead spend the rest of their honeymoon hiking and playing chess. Bella, maddened by frustrated lust, dreams about the sex she’s not having with such intensity that she wakes up in tears. Then she wakes up pregnant. A half-human monster grows inside of her. The movie ends with her vampire husband chewing the child free of her body in a scene so bloody and chaotic that theatergoers from Sacramento to Salt Lake City had seizures just watching it. I can still remember the wet, splashy sound effect they used, getting the baby out: like Gallagher finishing off the last of a watermelon.

Anyway, we’re somewhere out in the Philadelphia suburbs and the car is quiet. I want to tell these girls that not all honeymoons end in distended, black-vein-dappled stomachs and unplanned demon spawn. I want to tell them that on the rough-sex question Bella was probably right and Edward probably wrong — or rather that no matter their preference they’d always be right, and that they should stick up for that right. I want to tell them that the movie, Breaking Dawn — Part 1, was nevertheless like a gift, a deeply strange and unapologetically fucked-up film that I could take them to see years before their parents would knowingly allow them to see anything by Cronenberg or Polanski or Kubrick. That they would be lucky if in their lifetimes there was ever again a piece of popular entertainment as fascinated with or as honest about the dark underbelly of teen psychology as this one.

I want to be like, join me in exalting Kristen Stewart above all others.

What I actually do is turn the radio way up and get the girls out of the car as fast as I can. Whatever permission we as a nation have given the Twilight franchise to have a five-year-long conversation about sex and death and unplanned pregnancy with our nation’s youth does not extend to grown men having that same conversation with, well … anyone. Very much including 14-year-old cousins. On this particular night I listen to the radio in silence and conclude this is a mercy.

In the new Twilight Saga: Breaking Dawn — Part 2, which is delightful, a newly turned vampire Bella snatches a leaping mountain lion out of mid-air and feasts upon the beast’s blood. Free of the need for sleep or rest, she and her husband have deathless, Sting-like intercourse and try to make sense of the fact that their erstwhile bizarre love triangle partner, Jacob, has “imprinted” — werewolf for “chosen a lifelong soul mate” — on their half-human, half-vampire newborn. In the film’s climatic battle, the child clambers aboard her future husband and the two run, vampire on top of wolf, through the poetically snowy fields of Forks, Washington. It’s the most action-heavy of the five Twilight films; it’s also the one in which Stewart, freed by Bella’s newfound vampire blood to unhunch her shoulders and start decapitating her enemies, gets to at last show another register beyond moody sadness.

Maybe because I was once an unhappy teenager, like most teenagers, or because I grew up reading fantasy novels — like, uh, fewer teenagers — I have never had to struggle to like the Twilight films. Their appeal was always self-evident. They dramatized the life-and-death immediacy of teenage emotions with actual life-and-death stakes. Love would either yield a corpse or endure throughout all of human time. Sex was something to aspire to, to talk endlessly about, but the act carried with it some concerns, too. Such as: Your overexcited partner might rip out your throat. The central premise of the franchise was the central illusion of adolescence: Beyond the drab and frustrating reality of these teenagers’ lives was a magical hidden universe. Some of these kids really were special. Some of the people they loved were special, too.

Even the astonishingly poor craft of the Twilight films always seemed to serve their particularly teenage worldview. In the second Twilight, New Moon, Edward and Bella break up — not really, but he’s worried about her safety and so he leaves town for a while. There’s this scene: Bella just stares out the window. The camera turns circles around her, the weather outside changes, a Lykke Li song plays. Titles pop up: October, November, December. She doesn’t move. It’s pretty much the most hackneyed way you could ever devise to show depression on a movie screen. It’s also perfect, the self-dramatizing interior monologue of an 18-year-old girl come to self-dramatizing life.

And yeah, I like the good-natured comedy of the films, the way they earnestly represent the oblivious folly of teen thought. Bella only pulls out of her malaise in New Moon when she resolves to become an adrenaline junky, which in the Twilight universe means watching hyper-violent movies with names like Face Punch, riding motorcycles with strange men, and cliff-diving. It’s all so serious and not serious at the same time: wolves fighting vampires to the mellow sounds of solo Thom Yorke; out-of-context quotes from Robert Frost’s “Fire and Ice”; promiscuous spooning — a whole high school yearbook’s worth of confused, libidinous thoughts and feelings laid out over 10 overstretched hours of film.

In 2010 it was reported that Summit, the studio behind the Twilight films, was seeking a more prestigious director to finish off the last two films in the series. Three names were floated: Gus Van Sant, Sofia Coppola, and Dreamgirls‘ Bill Condon, who ultimately got the job. And it’d be fun to speculate about a moody alternate-universe Twilight finale directed by Coppola, say, if the series weren’t already so close to something she might have done. The movies would look a lot better, sure. But that general undertow of slightly bored anomie; the way that little gestures can take on big, fraught meanings; the process by which the essentially insignificant problems of contemplative and beautiful people are slowly built into the stuff of epic mythology, well — Twilight was pretty much doing that since the beginning.

At the screening for Breaking Dawn — Part 2, before the lights went down, a few critics and I got to talking about the resurrected romance between Kristen Stewart and Robert Pattinson. I’m betting you know about this already: She cheated on him. For a while they were split up. She wore his clothing in public; it seemed she was trying to send a sad and remorseful message. But they’re back together now, supposedly. And that was the question: Was it real/Were they doing it because they had to, because in some contractual sub-clause somewhere they had agreed to promote the new film as a couple? Or could true love and forgiveness exist independent of the needs of The Twilight Saga: Breaking Dawn — Part 2?

The very fact that we were having this conversation made me think of The Hunger Games, which is the franchise that seems poised to inherent Twilight‘s place in the teen firmament, with all the hypothetical mate-choosing (Team Gale, fwiw) and tent cities that place implies. I’d be lying if I didn’t admit that this was part of the appeal of the Twilight movies: the way that the fictional universe of the movies spilled messily out into the real world and made an equally if not more compelling drama out of the romance of the two young people who starred in the films. They were tributes. The series made Pattinson and Stewart famous, maybe even made them a couple, but it also seemed to make them miserable. Stewart described to W the relief she felt, wrapping her final scene on a Twilight set: “I felt like I could shoot up into the night sky and every pore of my body would shoot light. I felt lighter than I’ve ever felt in my life.”

The series has earned more than $2 billion worldwide and will make a bunch more in the next few months. A generation of young women learned to expect more from their male counterparts in the way of chivalry and superpowers. The movies were goofy and unabashedly romantic and crypto-conservative in their apparent disapproval of abortion and sex before marriage. (When Bella and Edward take to the bedroom in this newest one, there is a long and lingering close-up on her wedding ring.) More than any other individual franchise, we have the Twilight books and the films they were adapted into to thank for the total ubiquity of vampires and werewolves in pretty much every manifestation of modern American culture, a ubiquity that will presumably last long after this franchise is gone. For five years these movies reigned, and one important thing Breaking Dawn — Part 2 does is lavishly service the enormous audience the franchise built along the way: The long-playing credits are a graduation-style curtain call for nearly every major actor or actress ever to appear on the series. You can imagine which two people go last. I wish them peace, and immortal love, and a world without monsters in it.