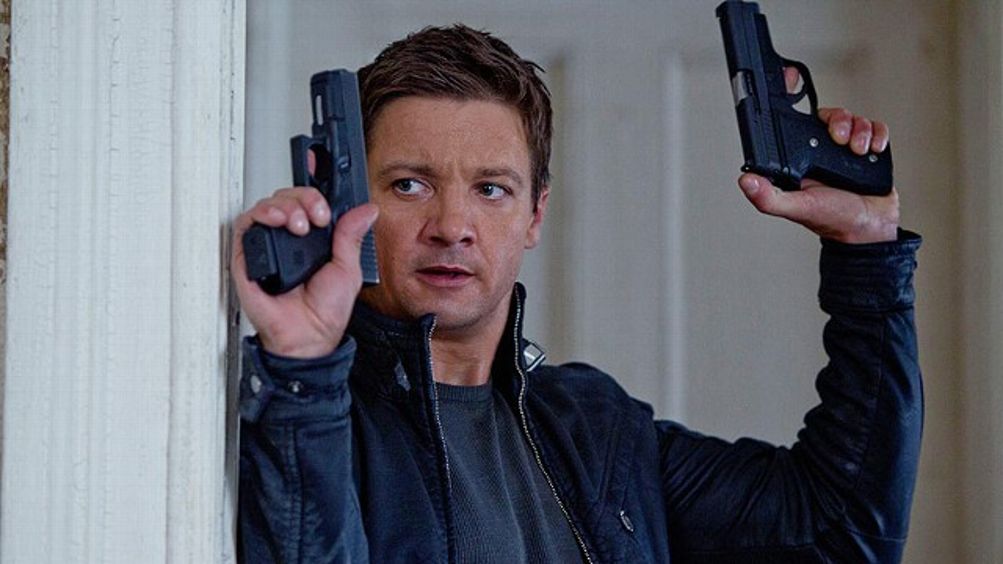 This column is often accused of being cynical about the way thousands of smart people moving in concert can create such dispiritingly unlikable movies — films like Abraham Lincoln: Vampire Hunter that fail even on the most basic level of being entertaining. So here is a simple, declarative endorsement of something: The three Bourne movies — The Bourne Identity, The Bourne Supremacy, and The Bourne Ultimatum — are as good (to this critic, anyway) as dateline-mad, big-budget Hollywood action films got this past decade.

When, at the end of the last one, Matt Damon’s ever more bullet-plagued Jason Bourne toppled into New York’s East River from the roof of the human-engineering torture lab from which he was spawned, he left behind a franchise that resurrected the spy thriller from its post–Cold War, I-guess-we-should-cast–Robert Redford? malaise and certified Damon as one of the most charismatic leading men of our time. If he could somehow be hauntingly human in a series that pretty much embodied Chaos cinema at its most nausea-inducing heights, he could be human in anything.

Taken as a whole, the franchise is a bright, shining example of what heedlessly commercial Hollywood can do, even if no one involved seems to have actually enjoyed the process. Bourne Identity director Doug Liman has been known to refer to his experience on the first film as a “fucking nightmare.” Damon memorably aired out series screenwriter Tony Gilroy in a recent GQ interview in which he threatened to put Gilroy’s “unreadable” script for The Bourne Ultimatum on eBay. Gilroy, in turn, bragged to The New Yorker that though he’d cashed the check for co-writing it, he’d never bothered to watch the third film. Paul Greengrass, who directed Supremacy and Ultimatum, was quoted by Damon as making a Bourne Redundancy joke about the possibility of a fourth film in the series. That movie will arrive in theaters this Friday as The Bourne Legacy; Greengrass’s very public lack of enthusiasm, presumably, is one of the reasons why Gilroy ended up directing it instead.

But together, they snatched a good movie from the jaws of a bad one three times running. In The Bourne Identity, director Doug Liman drew on his dad’s experience prosecuting Oliver North in the wake of Iran-Contra to make a film, only one year after 9/11, that is still one of the best and most thoughtful visions of Americans abroad in this century — Damon’s Bourne was a man in a foreign country with a gun in his hand and no idea how it got there. The Robert Ludlum source novels, Gilroy once said, “were about running to airports.” But Liman, with Gilroy’s help, made a movie about lost identity: an action film in which killing is the symptom of the problem, rather than the solution to it.

The next two movies are even more grim and implacable. Greengrass, who took over after Liman finished building a smoldering pyre of Universal’s money and patience, has been rightly hailed for his fight sequences, in which the camera often became just another free-swinging combatant. But Supremacy and Ultimatum are really about Damon’s Bourne, an avenging amnesiac with a guilty conscience, being punished for all the horrible things he’s done, both mentally and physically — by the end of the second film, he can barely walk, a novel concept in a genre where heroes typically skip sprightly away from savage car crashes and blunt force trauma. And Ultimatum, made at the late, dispiriting end of the Bush presidency, is darker still — waterboarding, black hoods, “rendition protocols.”

The three films were evidence that the system could function, that a room full of franchise-hungry studio executives might actually come together to produce something of merit, even if everyone involved hated each other, even if they were working from source material that people remain embarrassed to be seen reading in public. Even the way they rebooted the series was smart. After Damon and Greengrass took their parting shots and walked away, the studio took a deep breath, and rather than starting over, Amazing Spider-Man style, or making Damon a godfather offer to hand off the torch to someone else in 15 minutes of awkward, unenthusiastic screen time, they went and found a new star, put Gilroy in charge, and left the series’ universe — with its orgy of exotic locations and focus on the moral implications of turning humans into weapons — largely intact.

There are plenty of questions attending The Bourne Legacy: Can new star Jeremy Renner carry the franchise? Can Gilroy, who made a modern classic in Michael Clayton, then badly overreached on Duplicity, find his form again? But one of the more nagging summer movie interrogatives — Why? — should be absent here. After three films this good, and with the talent they’ve brought in for the new one, why not?

The Bourne Legacy opens more or less with Jeremy Renner’s Aaron Cross waving a flaming torch at a wolf, à la The Gray (twice in one year!), so that’s something. Gilroy has long been obsessed with reversals, double-crosses, elaborate webs of flashbacks. Accordingly, the first half hour is borderline incoherent — men in ties watching YouTube videos in secret CIA lairs, murmuring ominously, while Renner’s Cross is out in the woods, downing mysterious pills, leaping snowy canyons, dodging unmanned drone strikes. The dateline stuff is especially antic: Alaska, London, Bethesda, Seoul, Karachi, Chicago, Manila, Bangkok, and so on; often Gilroy alights on a new location just long enough to watch someone keel over and die. But the central mystery is basically the same from the first three films: Who is Aaron Cross?

Well, besides Jeremy Renner, anyway, who is probably the last real enigma of this blockbuster summer. A year ago, he seemed poised for certain success, with leading roles in The Avengers and all the infinite sequels that movie implied, and Mission: Impossible — Ghost Protocol, a franchise he was supposed to inherit from Tom Cruise before Cruise strapped on his Burj Khalifa rappelling gear and ripped it back. And then on The Avengers, it turned out, Renner had drawn the unlucky, arrow-shaped straw — his Hawkeye was a wordless, stiff-backed zombie, perhaps the most forgettable thing about the entire film.

Which leaves The Bourne Legacy, the newest installment in a billion-dollar franchise that seems only a few movies away from becoming a James Bond–like perennial juggernaut — especially if, with Renner’s help, Universal can prove that Bourne has become the kind of Rasputin brand in which you can swap out the lead every three to five movies and have it make no real significant difference. In modern Hollywood terms, that’s basically as good as it gets. So there is a lot of everybody’s money on the line here; the success of The Bourne Legacy will likely determine not just how much Renner participates in the future of the three franchises with which he’s currently entangled but also how many more Mission: Impossible and Bourne movies they even bother to make.

Hollywood studio balance sheets aside, Renner’s future is something that any moviegoer should care about — his performance in The Hurt Locker is as good as anything any other actor of his generation has yet to put together, a marvel of energy and barely contained self-loathing. Then he did nearly the same thing in The Town, minus the “barely contained” part: His Boston bank robber is a full-on psychopath who doesn’t mind dying and eventually gets his wish. Both performances were nominated, deservingly, for Academy Awards. In the confusing way of Hollywood, these nominations led not to more rich and complicated supporting roles but to the Ryan Reynolds Memorial Savior of Hollywood spot he now holds.

Hurt Locker director Kathryn Bigelow has said she cast Renner after seeing him in Dahmer, a movie in which he plays a dopey chocolate factory employee and serial killer with a shaggy haircut and creepily gentle way of speaking. It’s the other expressive pole to the wild man he plays in both The Hurt Locker and The Town, and Renner’s role in The Bourne Legacy provides a kind of opportunity to do a little bit of both. In one early scene, he shoots down an unmanned drone using only a rifle; Gilroy pulls away to show him coolly dismantling the weapon as, behind him, the vehicle bursts into spectacular flame. But at the same time, Renner’s killer agent is in some ways even gentler than Damon’s — more perplexed, more soft-spoken, even less comfortable in his own skin.

But Renner gets very little dialogue — it takes more than 40 minutes for him to get a speech that’s more than three or four sentences long — and even less backstory: You get the sense that Gilroy’s saving a lot of that for The Bourne Despondency, or whatever the next one will be called. Legacy, for its part, does just enough to earn its sequel — in part because the finale of this one is so open-ended and incomplete that moviegoers will grudgingly return just to figure out what it was they saw this time around.

Big-screen action hero, thy name is probably not Jeremy Renner. Sorry, everyone.

The movie has its fleeting pleasures: Edward Norton, for one, as an icy bureaucrat whose eyes say Why am I fighting for screentime with Joan Allen? Best is when Renner’s Cross links up with Rachel Weisz’s genetic scientist, the woman who helped make him the amoral murder machine he is today; their flight together from the government agents trying to kill them is pretty much the most readily comprehensible and enjoyable thing in the film. But mostly Legacy makes you realize just how charismatic and talented Damon is — that he could stand in the middle of all the sound and the fury of the first three films, speak so softly, and still be heard.

Renner is given less to work with, and the wan, faint result makes clear how much he needs a fully realized character in order to come alive onscreen — as Cross, he mostly seems like a bummed-out guy on the verge of finding out that they’re about to take all the franchises back. Big-screen action hero, thy name is probably not Jeremy Renner. Sorry, everyone.

Gilroy’s Duplicity was an exercise in outsmarting himself — it’s a thriller that’s also a comedy! Julia Roberts and Clive Owen are in love! Or are they?! — and the same thing seems to have happened here. The first three Bourne films Gilroy helped write told a relatively simple story: A man tries to recover his humanity after waking up one day and realizing, in Gilroy’s own words, that “the only thing he knows how to do is kill people.” They were action flicks in which most of the action took place in between the actual action sequences, in the quiet moments where Damon’s Bourne was left to battle himself. The Bourne Legacy is loud and insistent and there is a great neck-snapping sound effect toward the end; but what it lacks is any room for contemplation, since neither we nor the film’s lead actor ever seem to have much of an idea as to what’s actually going on. There are — as this series once emphatically proved — better ways to make us want a sequel.