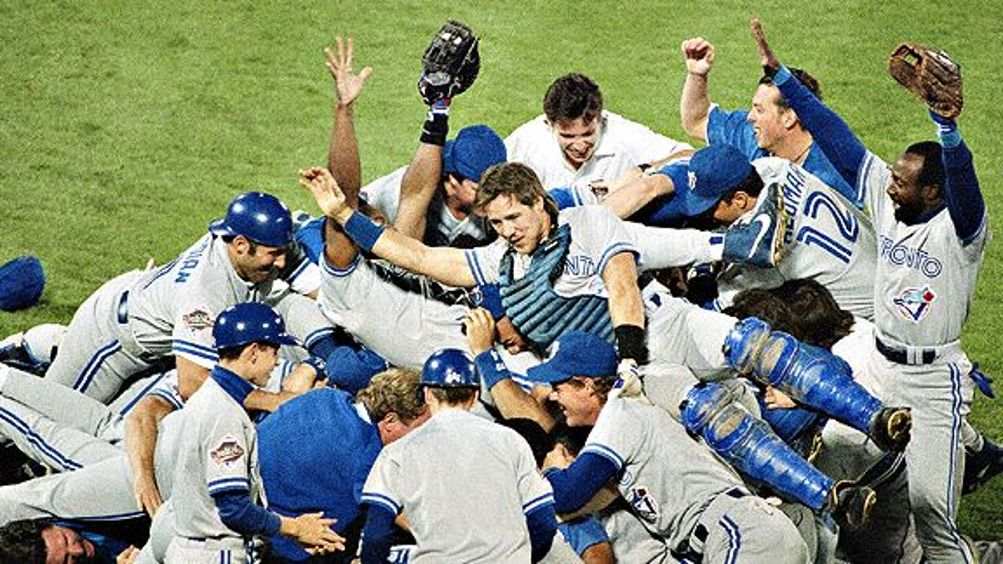 Without looking it up, I can tell you the night the Toronto Blue Jays won their first World Series — October 27, 1992 — because that was also the night I lost my virginity. I’m not nearly so sure of the night they won their second World Series. I was in college, watching the game in my dorm’s common room, on a TV that was suspended from the ceiling. When Joe Carter hit that home run off Mitch Williams to beat the Philadelphia Phillies in 1993, I jumped up and cracked my head on the TV, opening a dime-size hole in my scalp. It turns out that holes in your head bleed a lot. Somewhere, there is a picture of me still celebrating, late that night, drunk, mostly naked, and covered in dried blood. I’ll be forever glad that we did not yet live in the digital age.

That’s how important baseball was to me back then. I still have the Ken Burns Baseball catalogue on VHS; I once spent an entire summer making a paper model of Fenway Park, complete with a ball-marked Pesky’s Pole. But then a couple of fate-changing events took place. First, there was that whole no-longer-a-virgin thing. Before sex, something like Dave Stieb’s wobbly retirement — ignoring his brief resurrection six years later — would have qualified as a significant life event of my own. Now, it barely registered as a brief. And then baseball went on strike. I was sitting on a couch in a Mexican hotel room when everything stopped — those 14 words are how all stories of loss should begin — and I took it very much to heart. The girl who claimed my virginity later cheated on me, and baseball’s cold shoulder gave me the same feeling: I should have left you before you left me.

So, when baseball made its inevitable, embarrassed return, I stayed away — mostly. I couldn’t leave it behind entirely, of course. I’ve never been good at stopping up my love like a potion. I moved to Toronto, and maybe once a week I’d go with friends and buy four-dollar seats in SkyDome’s fifth deck, high above right field, high above the visitor’s bullpen. But my relationship with baseball was meaner by then: My friends and I long took singular credit for the end of Mark Wohlers’ career. You might laugh at that, but I believe it to be true. This was in the spring and summer of 1997, coming off his World Series choke to Jim Leyritz and the New York Yankees. We spent entire games yelling terrible things at Wohlers until he broke in half. I have no idea why we did that. I don’t feel good about it, looking back. Some bitter part of me saw baseball players as baseball, as a flawed institution that betrayed me, rather than as a collection of human beings who were very good at throwing and hitting and catching a ball. In real life, Mark Wohlers was just some guy who threw a fat pitch to the man with the most muscular temples in major league history. He didn’t deserve to have to listen to us. We’d never set foot on that field. There would always be a distance between us.

Which explains why I was so surprised to find myself standing on that same field only two years later. I had finished school, having decided that urban planning wasn’t for me. (It’s not the same as playing LEGO, I learned too late.) As it happens, a new newspaper was starting up in Toronto: the National Post. After a series of extraordinarily strange events, very few of which were within my control, I ended up with a job there, in the sports department, having never written a published word except for four stories in my college newspaper.1 I started out covering boxing at the Post. And then I began writing baseball. And then, in 2000, I got the beat.

The first ballplayer I talked to was Jose Canseco. An older baseball writer had told me that when I talked to players, I shouldn’t be nervous, but I also shouldn’t try to bluff my way past them and their knowledge. They knew the game better than I ever might. My job was to try to steal just a little of that knowledge from them and pass it along to our readers. I should ask questions, the writer said, that I really wanted answered. I should let my fan’s curiosity be my guide.

That first game, Canseco had hit a home run into the fifth deck, one-handed, off a curveball that was very nearly in the dirt. I wanted to know how he did that. (I was naïve enough back then — we all were, I guess — to think that Canseco might have accomplished such an improbability with his natural physical gifts and baseball intelligence.) There was Canseco, standing naked near his locker, still holding his bat in his hands. I walked over and introduced myself. I’m pretty sure my voice cracked. I also had a bad case of the trembles. That only got worse when Canseco accused me of looking at his dick.

I really hadn’t. I had looked down at my notepad, so that I might write down whatever sacred bit of wisdom Canseco was going to share with me. Instead, I stood accused of looking at his fungo bat and my embryonic career — hell, my career in its opening moments — was now doomed. I didn’t need to be told what happened to “lookers” in locker rooms. Once a writer got a reputation for that particular brand of investigation, he was done.

I was finished. It was over.

“Just messing around,” Canseco finally said. “Don’t be so nervous.”

I lasted 1½ seasons on the beat, and despite Jose Canseco’s sage advice, the nerves never left me. What did leave me, though, was the last of my love. Covering baseball was like seeing how your favorite sneakers are made: The process took all of the pleasure out of it.

The Blue Jays weren’t very good anymore, but Toronto remained a competitive market — four newspapers, and with lots of time spent in New York and Boston, as well, which will make any baseball writer crazy just by osmosis. I was young, and I hadn’t yet learned how to report. I couldn’t compete. Other guys, more senior guys, could walk into that locker room and look like they belonged. Raul Mondesi, a man I’d interviewed extensively for many months, once asked me to iron his shirt in Kansas City because he thought I was a clubbie. Invariably, I stood in the wrong place or asked the wrong question or made the wrong observation. Jim Fregosi, the manager, put me in a headlock more than once. I ended up trying to write about anything other than baseball, just to avoid looking as stupid as I was.

Back then, the Blue Jays had a promotion in which, between innings, a kid came out with a kind of bazooka. It was called the Hot Dog Blaster, and it used compressed air to lob tinfoil-wrapped hot dogs into the crowd. During a game against the Anaheim Angels, the kid had somehow packed a little too much powder into the cannon. He launched those hot dogs into the night sky, where they exploded in flight, like skeet, showering bits of wiener and bun on the crowd below. Watching the scattering masses, running for their lives, was one of the funniest things I’d ever seen. It was like flaming arrows were raining down on them. I found my wife’s vegetarian sister, Sarah, in the crowd behind one of the dugouts. “Imagine getting sprayed with wiener shrapnel,” she said. “I would have died.”

Everything else possible happened during that game. The score became something ridiculous, like 16-10. There was a bench-clearing brawl. But I was determined that I was going to write about those disintegrating hot dogs. Baseball had become an afterthought to me, just the background noise during an interminable season. Here was this beautiful game, unfolding in all its glory, and I was dead set on writing about the airborne meat assault I’d just witnessed. I think the score ended up in the 16th paragraph. I did a follow-up story the next day. On the hot dogs.

It was coming time for me to get out. My last day on the beat was in New York City, in the middle of the 2001 season, when the Blue Jays were playing the Mets. I didn’t really know what I was going to do next, but I knew I had to leave.2 That last day, walking out of the giant blue-and-orange toilet bowl that was Shea Stadium, I was almost hit by a truck. I took that as a sign that I was right to get out. Maybe it was a sign that I should have stayed in my seat.