The Tenth Day of NBA Christmas 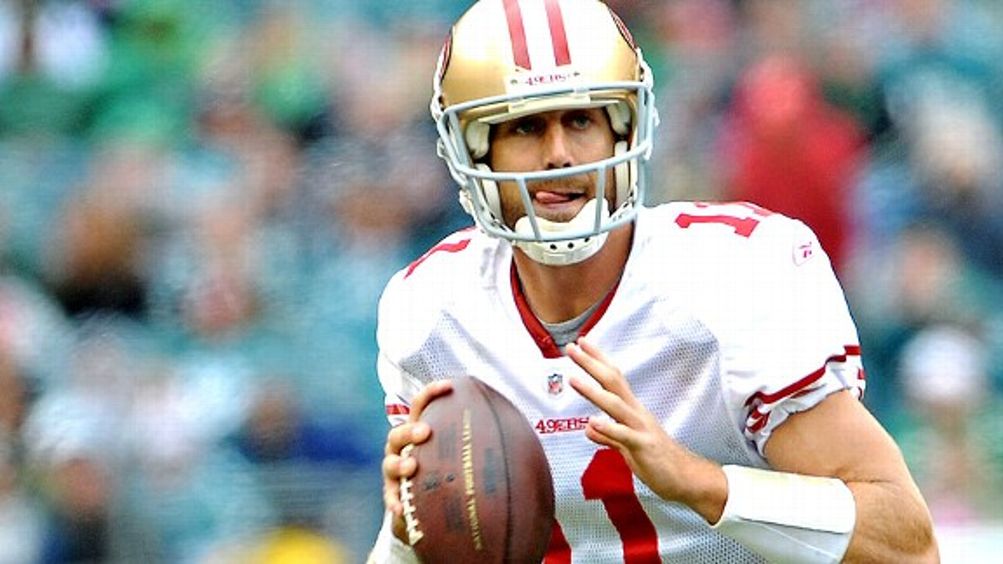 Here are some signs that your local team is doing well: City buses begin tweaking their LED displays to big-up the team on game nights; adults begin wearing ball caps on their morning commute; children begin writing all their book reports on their first-, second-, and third-favorite players’ autobiographies; national networks begin requesting that your games be moved to nighttime to accommodate their schedule; and local rappers begin penning paeans to the future champions who walk your streets. San Francisco rapper Bailey knows how to pick a winner. In 2010 he recorded “Black and Orange” in honor of the Giants’ playoff run. This week he released “Who’s Got It Better?” the title a reference to one of 49ers coach (and Star Wars enthusiast) Jim Harbaugh’s motivational chants. “Follow, while I ball like Smith,” Bailey raps, “Reggie, Alex, or Aldon, take your pick.”

It’s a measure of Alex Smith’s standing in the community that a local rapper is even bothering to try to bask in some of the Niners quarterback’s reflected shine. As the saying goes: To err is human, to forgive divine, and to be a fan is to never forgive. It is to remain scornful and withhold forgiveness until someone proves his or her own divinity, or demonstrates some fundamental unwillingness to err. Before this season, Alex Smith had never really come close to offering any reason for the mellow, raging 49er fan to feel anything approaching patience, let alone forgiveness or even affection.

Fans in the Bay Area have made a pastime of wondering exactly where it all went wrong for the once-proud Niners. Unerringly, they have pointed to the selection of Alex Smith as the first overall pick in the 2005 draft. Even at the time, Smith was an unexciting and, thanks to his University of Utah pedigree, somewhat inscrutable pick. Every other highlight clip seemed to feature a quarterback draw and/or artificial turf. There were doubts as to whether his skill set would translate in the pros. And, on a purely superficial, poster-in-a-kid’s-bedroom level, there was that unglamorous, decidedly un-“Joe Montana”-like name.

It’s hard to describe the low that has afflicted the Niners fan base in the 10 years since their last playoff appearance, except to offer that they are the only major franchise in the area whose fans feel a sense of entitlement. During that glorious period, winning ceased to be pleasurable; it was a pathological necessity. While the Raiders, Athletics, Giants, Warriors, and Sharks — even Stanford and Cal — have each enjoyed moments in the sun at some point during the Niners’ decade-long absence from the playoffs, none of them could claim the same sense of institutional privilege as the Niners. None of them had, within the memory of their middle-aged fans, once been considered a flagship franchise of their respective league. The 49ers of the 1980s and 1990s didn’t just win. They embodied that special sense of continuity — Bill Walsh’s coaching tree; those star-studded lines of succession at the skill positions — that distinguishes a dynasty from a great run. One is hard-pressed to describe Alex Smith’s success this season as some kind of rise, return, or comeback, for such terms suggest that he was ever here to begin with. He is still more or less the same player, only he is a better decision-maker and more efficient risk-taker. Most important, in a league of storylines he is finally in control of his own story. He has somehow morphed into one of the most compelling and unlikely underdogs of the season — certainly more so than Cam Newton, Tim Tebow, or — in their own minds, at least — the Detroit Lions’ defense.

There were concrete reasons for Smith’s underperformance these past few years, foremost among them the revolving door of head coaches and offensive coordinators with whom he has had to work. There have been injuries, faintly amusing rumors that his hands were too small to properly grip the ball, and many years when the roster surrounding him was simultaneously too young and too old. But Smith’s problem in the public imagination was always the weight of expectation thrust upon him. The first overall pick should possess gravitas, presence, vision. Smith’s lopsided grin didn’t project confidence. He wasn’t allowed to look glum or turn inward amid that chorus of boos and discouragement. He couldn’t be a pleaser — one of the lessons the accommodating Smith learned the hard way.

But this has all changed. The expectations affixed to his selection have expired. Other than perhaps Jeff George — and the comparison is admittedly a stretch — what other first-overall quarterback over the past two decades has taken this long to develop into a solid pro? Instead, the mere fact of Smith’s survival has become all that one needs to know about his past. There’s a dignity to his persistence, a sense of self-awareness and humility that isn’t usually associated with players of Smith’s supposed stature.

The first-overall pick isn’t supposed to have a chip on his shoulder or play the underdog, since the narrative of being snubbed or doubted simply doesn’t hold. That’s what makes Tom Brady so absorbing, the champion who is unable to forget the six quarterbacks taken ahead of him in the 2000 draft. It’s what powered one of Smith’s predecessors, Jeff Garcia, to court grievous bodily injury on a weekly basis. Regard Aaron Rodgers’ placid intensity, as though he got all the clenched-fist rage out of his system years ago; now his seething is ambient, a self-powered motor. A Niners fan as a child, Rodgers dreamed of being selected first overall and becoming the team’s next great quarterback. Instead, they selected Smith and he tumbled to the Packers at age 24.

It was weirdly fitting that the first two teams to clinch playoff berths last week were Smith’s Niners and Rodgers’ Packers, forever twinned in the consciousness of the Niners fan, only now Smith is the one with something to prove. For the Niners faithful, it is slightly painful to revisit the recent, intertwined histories of these two franchises. Rivals for a brief spell in the late 1990s — and only the Angel of History can speculate as to what would have happened had Terrell Owens not made this catch — the Packers have flourished under the guidance of coach Mike McCarthy, a former Niners coordinator who oversaw their abysmal 2005 offense, and Rodgers.

The decision by then-head coach Mike Nolan to select Smith over Rodgers remains folkloric. Was there a moment that could have produced a different future? Perhaps it was Rodgers’ sour attitude toward the battery of Nolan’s diagnostic drills, a sideways glance as he was asked to throw the ball through a hoop or hop around on one leg. Or maybe it was during an interview, as Nolan scrutinized their faces when presented with the same riddle-like questions. Or maybe the sum total of interactions suggested to Nolan that Smith was the more cerebral, predictable, and teachable prospect. Whatever the truth may be, the stories remind us how close the decision was. And they also suggest the importance of a given team’s organizational culture.

Logic breaks down whenever one considers the sport counterfactual: Would Rodgers have flourished with the Niners without those years of solitude and the humiliation of draft day? Would Smith have been better served by sitting and learning during his rookie season rather than reinventing himself on the fly and getting repeatedly pummeled? All that matters for now is that these are questions a Niners fan might finally ask without contempt. The comparisons between the two are still lopsided. But the possibility of Smith authoring a new ending to his story is one of the more unusual things to happen in the NFL in some time. It’s not too late for a rivalry between Aaron and Alex — the disgraced and the triumphant, the top dog and the underdog, at least for now.

Previously from Hua Hsu:
Genuine Glee
Highbro/Lowbro: On Harold & Kumar
Harbaugh vs. Schwartz: Coach Fight!
Waiting for Radiohead
Varieties of Disturbance
When They Were Kings: Paid in Full to Tha Carter IV
Never Been in a Riot