The Oscars: Who Will Get Nominated? 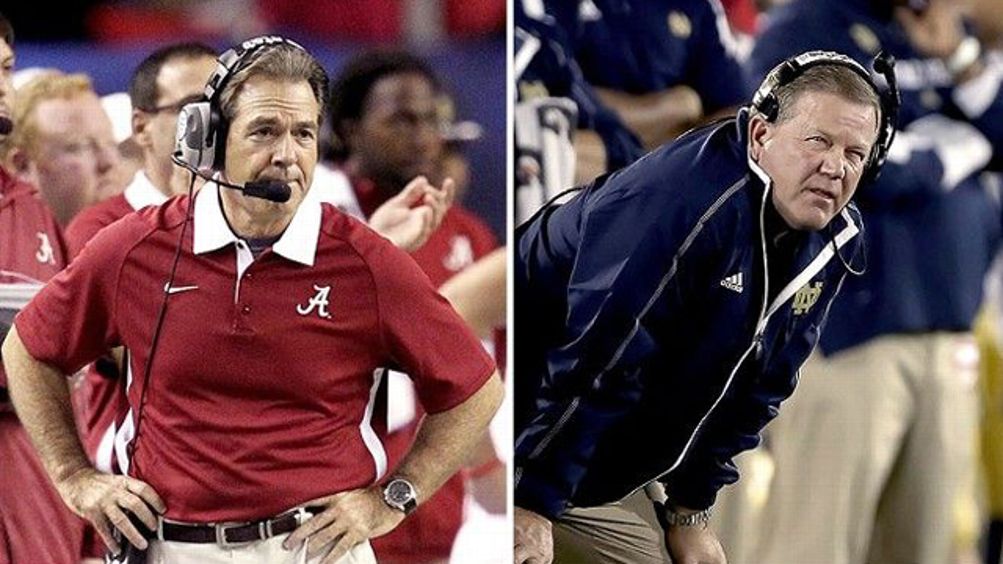 Each team’s schedule looked like a murderers’ row before the season, but turned out to be more like an aggravated-assaulters’ row. That’s not the fault of Notre Dame or Alabama. Alabama tacked Michigan onto its SEC West schedule, but Michigan was disappointing, while SEC rivals Auburn and Tennessee both turned out to be pushovers. The Mississippi teams did what they could against Saban’s crew, which wasn’t much. The SEC schedule-makers favored the Tide with conference newcomers Mizzou, but along with them came Texas A&M, who defeated Alabama at home. Both Alabama and the Irish went on the road and beat up on teams that had been hyped before the season but turned out to be weak — for Alabama that opponent was Arkansas, for Notre Dame it was Oklahoma. Both had tough and emotional road wins — Alabama outlasting LSU’s defense, Notre Dame shutting down USC’s offense. Both teams beat Michigan. Alabama earned a down-to-the-wire victory over a very talented Georgia squad, while Notre Dame’s best win was against then-underrated Stanford. When the Irish were caught in the emotional doldrums against Pitt, Everett Golson was able to salvage the day, and that quarterbacking experience could pay dividends in the National Championship Game. When the Tide were caught hungover — after pulling out a late win in Baton Rouge — they were torched early by Johnny Manziel and couldn’t complete a fourth-quarter comeback. Thus Alabama’s no. 2 ranking and Notre Dame’s no. 1.

Which is all to say that this is pretty much a wash. Alabama did a better job of blowing out inferior opponents, but that’s been shown to mean little. Notre Dame played a more diverse schedule, traveling to farther-away places. Both teams were involved in last-minute games. The Irish didn’t face an environment the likes of LSU’s Death Valley, but that’s because there is no environment the likes of Death Valley — and anyway, the national championship crowd is split, so noise isn’t a big factor. All indications are that neither team will be shocked by what the other has to offer, and this can be a real concern for the non-SEC team. The current SEC BCS streak, which I won’t mention after this paragraph, includes Ohio State teams that mistakenly believed what they’d done in the Big Ten was meaningful and record-setting offensive powerhouses (Oklahoma and Oregon) that saw their fast-break theatrics grind to a halt. What recommends Notre Dame more than anything, and what has me convinced this will be a close game, is that they’ve gutted out wins, that they are not in the grips of hubris, that they won’t be looking around confusedly when it’s fourth-and-9, wondering what a punt formation is. Notre Dame will be comfortable in a give-and-take jawbreaker contest, and that’s why they’ll do OK.

Brian Kelly has shown he’s not the next Bob Davie or Ty Willingham or Charlie Weis. He has handled all the baggage that being head coach in South Bend entails, and he knows that defense is what butters the bread. There’s one way to build a legit defense, and that’s by winning recruiting battles for elite line prospects. There are schemes and stunts and philosophies, and then there are superior athletes who wreak havoc around the line of scrimmage. Like Stephon Tuitt out of Georgia. Like Louis Nix out of Florida. For most programs, wins and losses have little effect on recruiting success. For Notre Dame, which recruits nationally first and locally third, wins make a great difference. Winning a national title — to some degree just being in the title game — raises the profile of the program for prep players. The Irish need this geographically far-reaching profile boost in a way the Texas Longhorns don’t need their profile raised in Houston and Dallas, or the Georgia Bulldogs don’t need their profile raised in Valdosta and Atlanta.

This isn’t the old days. Much of this generation of high school talent doesn’t know Notre Dame as anything except a bad team that Catholics talk about a lot. Kids in California and South Carolina and Louisiana will be watching on Monday, and they will learn, whether they want to or not, about the Notre Dame legacy. Would anybody bet on Notre Dame being back in this game next year? No. Would anybody be extremely surprised if they’re back within the next five years? I wouldn’t.

Now, Saban. We all have our own challenging emotional journey concerning this man. I once disliked him for his robotic manner, and then I envied his excellence and the lack of flaws or vulnerabilities in his program. I resented that he seems not human, that there’s nothing dramatic about him, nothing compelling. Unlike OSU’s Urban Meyer with his domestic operas, LSU’s Les Miles with his grass-eating and continual clock fuckups and ill-advised fakes, Oregon’s Chip Kelly with his distracting posters and blinding-fast offense, or South Carolina’s Steve Spurrier with his wily befuddlement and sailing visors, what seems to compose Saban is a set of intricately outlined policies and procedures that result in his teams accruing more points over the course of 60 minutes than the other team. These policies and procedures are his soul, and his physical body is an instrument for the imposition of these policies and procedures. One can imagine he has no preferences in life that aren’t relevant to the wearing down of an opponent on a football field. If asked by a lackey of the football offices which he prefers for dinner, Greek or Chinese, one can imagine this response from Nick: “Those cuisines are equally desirable and also equally undesirable to me because my eating will neither increase nor decrease my team’s chances of winning the next football game.”

Well, I’ve come to find his calculating sternness palatable. Though no fun, Saban doesn’t seem to be a bully, or at least no more than is necessary for a football coach. He’s not a sorehead. Getting behind in a game doesn’t frustrate him the way you’d expect. If anything, he seems dismayed that his systems are failing more than he’s upset he might lose. I don’t wish ill on the guy, although I know I’m in the minority there. Maybe it’s a character flaw. Maybe I’ve joined that which I don’t expect to beat.

As far as game planning for Notre Dame goes, you have to believe playing LSU regularly will help the Tide coaches prepare for a great defensive front seven. LSU’s defense is faster than Notre Dame’s, but Notre Dame’s is stouter, with a trio of 300-pounders making up the 3 in their 3-4. In last year’s championship game, Saban and crew elected to throw often on first down, something they’re loath to do. Needless to say, this caught LSU off guard. This will be the key decision for Saban: whether to break character and attack the weaker part of Notre Dame’s defense, its secondary, or to stick with heavy doses of the power running game and hope to wear the Irish down.

The Alabama offensive line. The Notre Dame defensive front seven. This will be a startling collision of agile beef. The Alabama maulers have been the heart of the team for years. They don’t miss assignments. They’re big and mean and they can move. They’ve got physical runners behind them. Notre Dame will slow down the run, but Saban of course will stick with it. Noseguard Louis Nix and linebacker Manti Te’o will need to be just as fierce in the fourth quarter as in the first. Also, if AJ McCarron has time, he will beat you. Stopping the run won’t be enough for Notre Dame. They’ll need to harry McCarron in passing situations.

With receiver Kenny Bell ailing, Amari Cooper has become the deep threat for the Tide. He’s a true freshman but he doesn’t play like one. If McCarron has time to set his feet, the Irish secondary will have its hands full with Cooper. Out of the Bama backfield, Eddie Lacy is more the hammer and T.J. Yeldon more the big-play changeup.

For Notre Dame, it’s a team attack based on being versatile. You don’t expect any record-breaking individual performances from them, but they’re a chain-moving headache. I can only imagine the hours being put in by Saban and his defensive coaches as they prepare for the nightmare matchup that is Tyler Eifert, a walking pass-interference flag who can line up at tight end or out wide. Theo Riddick lines up everywhere. The receivers are good enough to make plays when needed. Cierre Wood can break off chunks of yardage. Golson will hurt you with his feet. The Alabama defense is more sound than disruptive this season, and they better be sound as a pound against the shifty tricks of Brian Kelly and offensive coordinator Chuck Martin.

For Notre Dame, a win means everything. A victory against Alabama would knock the SEC from its pedestal, grease the recruiting gears, crank the Irish hype machine back up to the obnoxious levels it’s capable of, bring the faithful to a fever pitch. A close loss for Notre Dame will be disappointing because they may not get back to this level for a while. It’s not outlandish to think they’ll be back in the next few years, but it’s also not outlandish to think that it could be a long, long time before stars align for them again. Now if the Tide beats Notre Dame handily, which I don’t believe they will, that would be very damaging indeed. It will seem then that the Irish never belonged in the game. The gap between SEC and Other will seem as real as ever.

For Alabama, this is another notch on the old goalpost. They’ll play well and they’ll either win or they’ll lose close and they’ll be right back in the hunt next year, hosting LSU, exacting revenge on A&M. A win, they say, cements the dynasty. A loss will be a chance for Saban to refine his procedures and policies.