The Sound and Fury of the NFL Preseason

A Visit to the 2014 National Sports Collectors Convention, Part 2

Bill Simmons: On the “My Favorite Annual Summer Traditions” scale, the National Sports Collectors Convention ranks somewhere between the Fourth of July and Sharknado for me. But after hitting four of the last five conventions and posting colossal photo essays from 2009 and 2011, I needed a different wrinkle for 2014. And that wrinkle was named Rembert Browne.

Rembert Browne: I like stuff. And have a lot of stuff. But need more stuff. Also, my direct-deposit paycheck came in between Days 1 and 2 of the convention, so I knew I would be out of control on Thursday (after Wednesday’s test browse). The things that I always have my eye on: stuff for my apartment, stuff for body, and stuff for my future child to make my future child the most swagged-out future child.

Simmons: As for me, I wanted to find cool stuff for Grantland’s podcast studio that we could expense to ESPN without getting fired. That was my biggest goal, narrowly edging out “Get through two convention days without ever shaking hands with any collector wearing a Hawaiian shirt who also happened to be eating” and “Keep Rembert from spontaneously self-combusting.” Everyone has their own personal wheelhouse, and as we found during our two days in Cleveland, we had stumbled into the Rem Vortex.

Simmons: And the 2014 National Sports Collectors Convention in Cleveland accommodated all of those things. Thankfully, we brought our iPhones and took a few million pictures. Here’s what transpired.

THINGS YOU’D SEE ONLY AT THE COLLECTORS CONVENTION 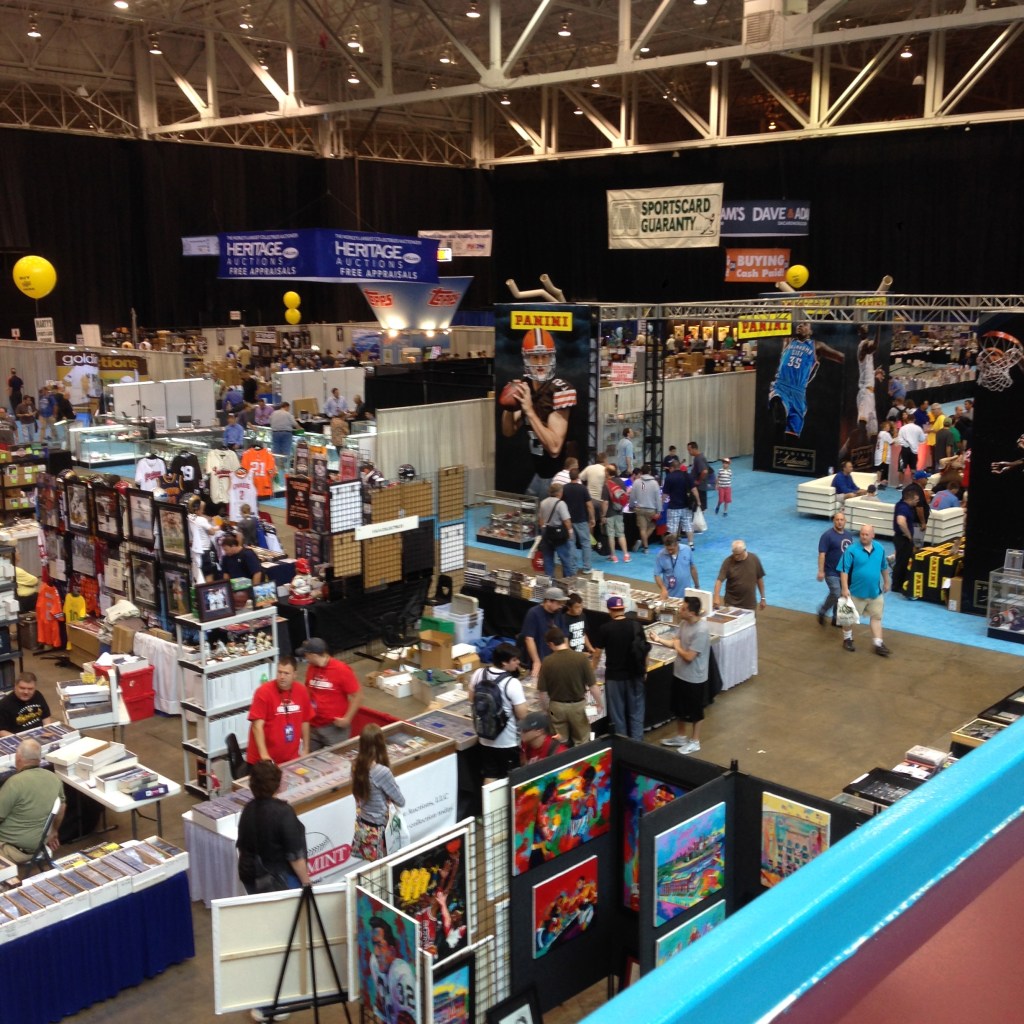 BS: Ever since the Browns drafted Johnny Manziel, we’ve seen (a) the Cavs win the draft lottery, (b) LeBron’s Heat get trounced in the Finals, (c) LeBron and Comic Dans Gilbert make up, (d) LeBron announce “I’m coming back to Cleveland,” (e) the Cavs get Kevin Love, and (f) hundreds and hundreds of socially awkward sports collectors descend on Cleveland for the collectors convention. IT’S THE SUMMER OF CLEVELAND!!!!!

RB: This picture was taken in front of an indoor Ferris wheel, just to give a sense of how weird all of this is. Here, look. 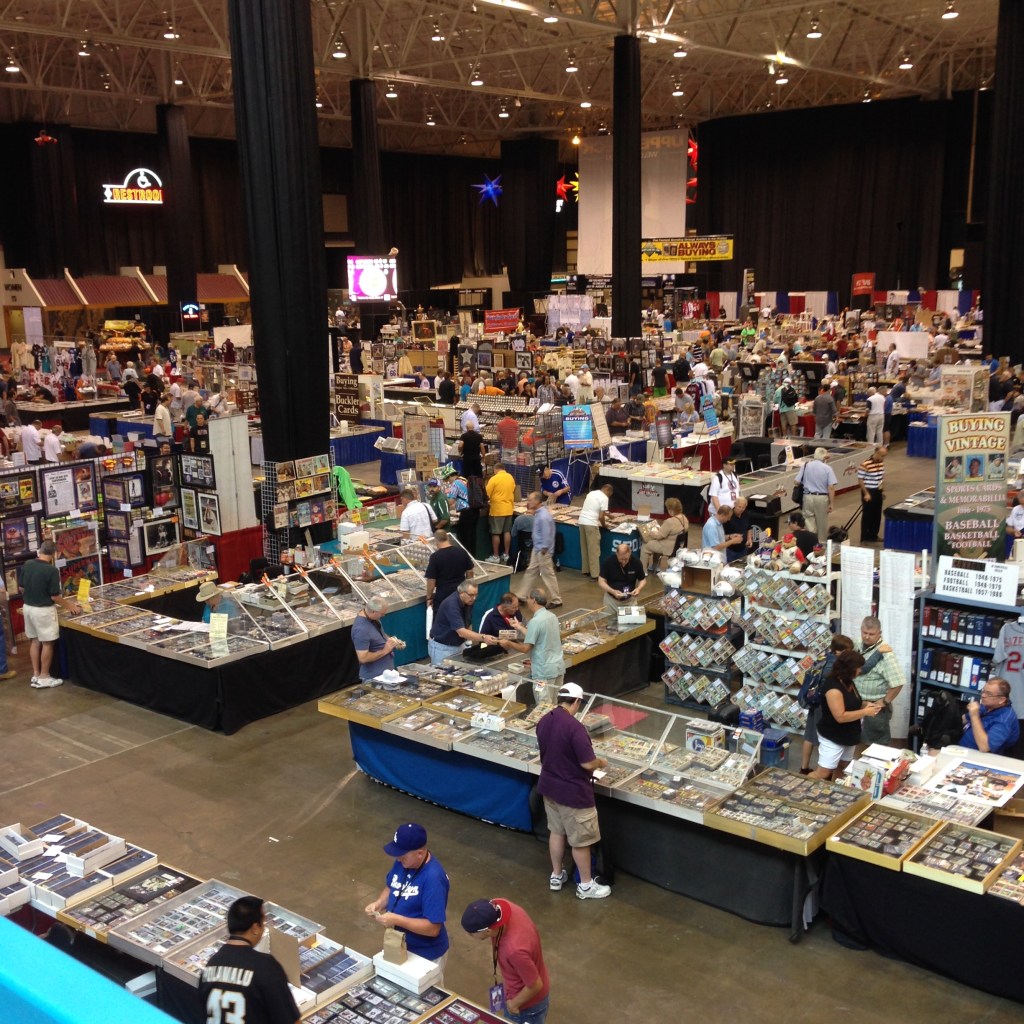 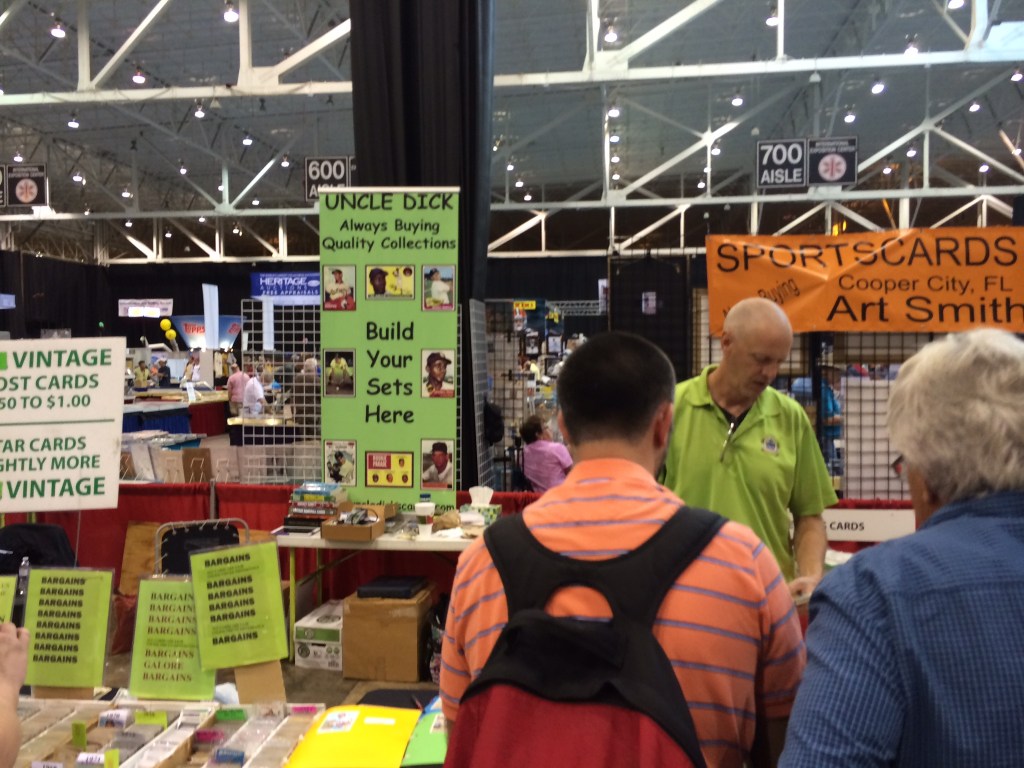 RB: I tried to buy Uncle Dick. But then he moved. Apparently, Uncle Dick is a real guy. 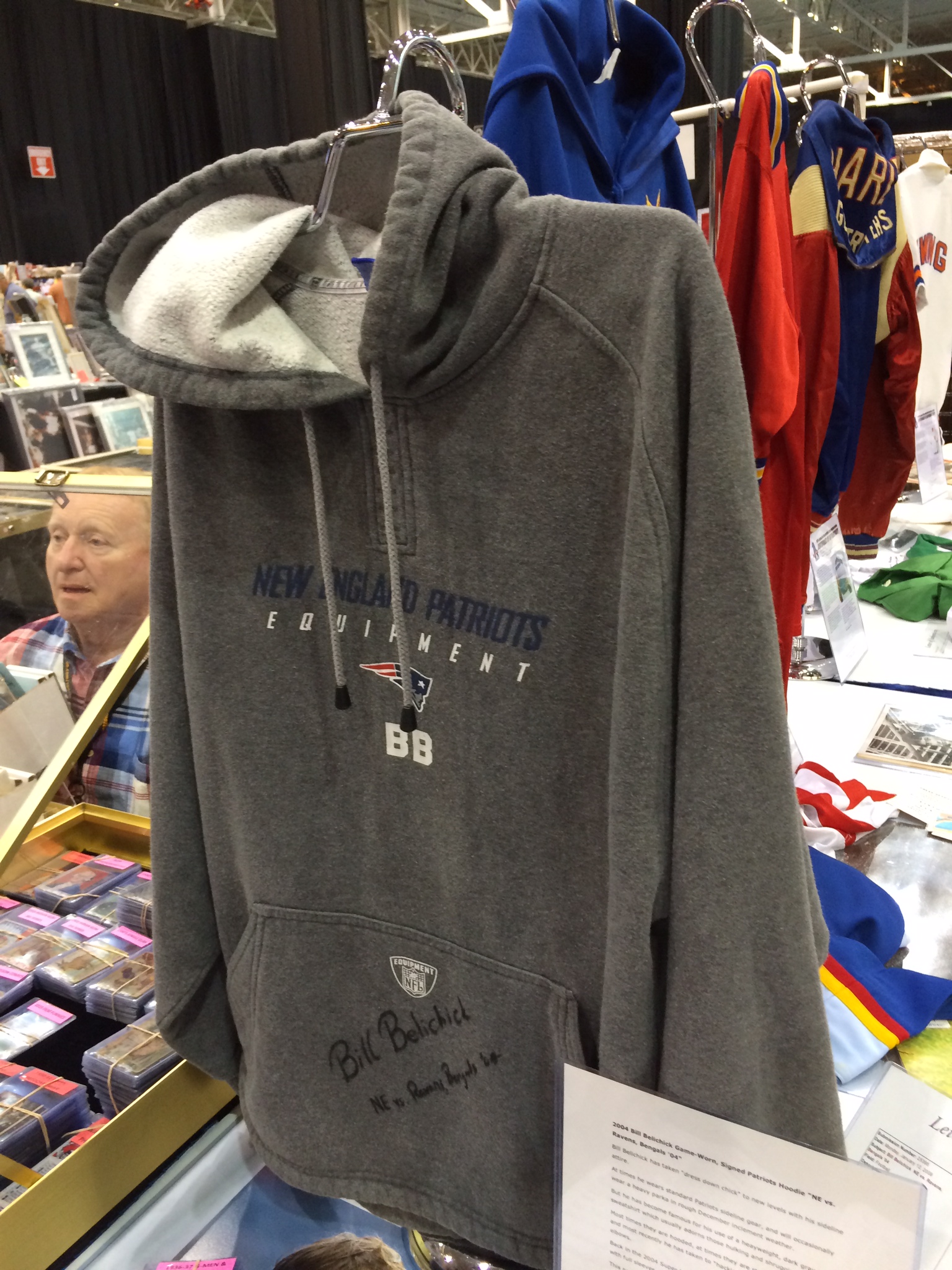 RB: I’m in the camp (perhaps all to myself, because I’m a cynic) that believes every signature is fake. This Belichick hoodie: no different. So glad you didn’t buy this.

BS: I agree 100 million kajillion percent. Unless I see a PSA certificate or the person actually signing it, I don’t want auto’ed stuff. More importantly, couldn’t Belichick’s empty and possibly signature-forged hoodie give all of Belichick’s press conferences this season? 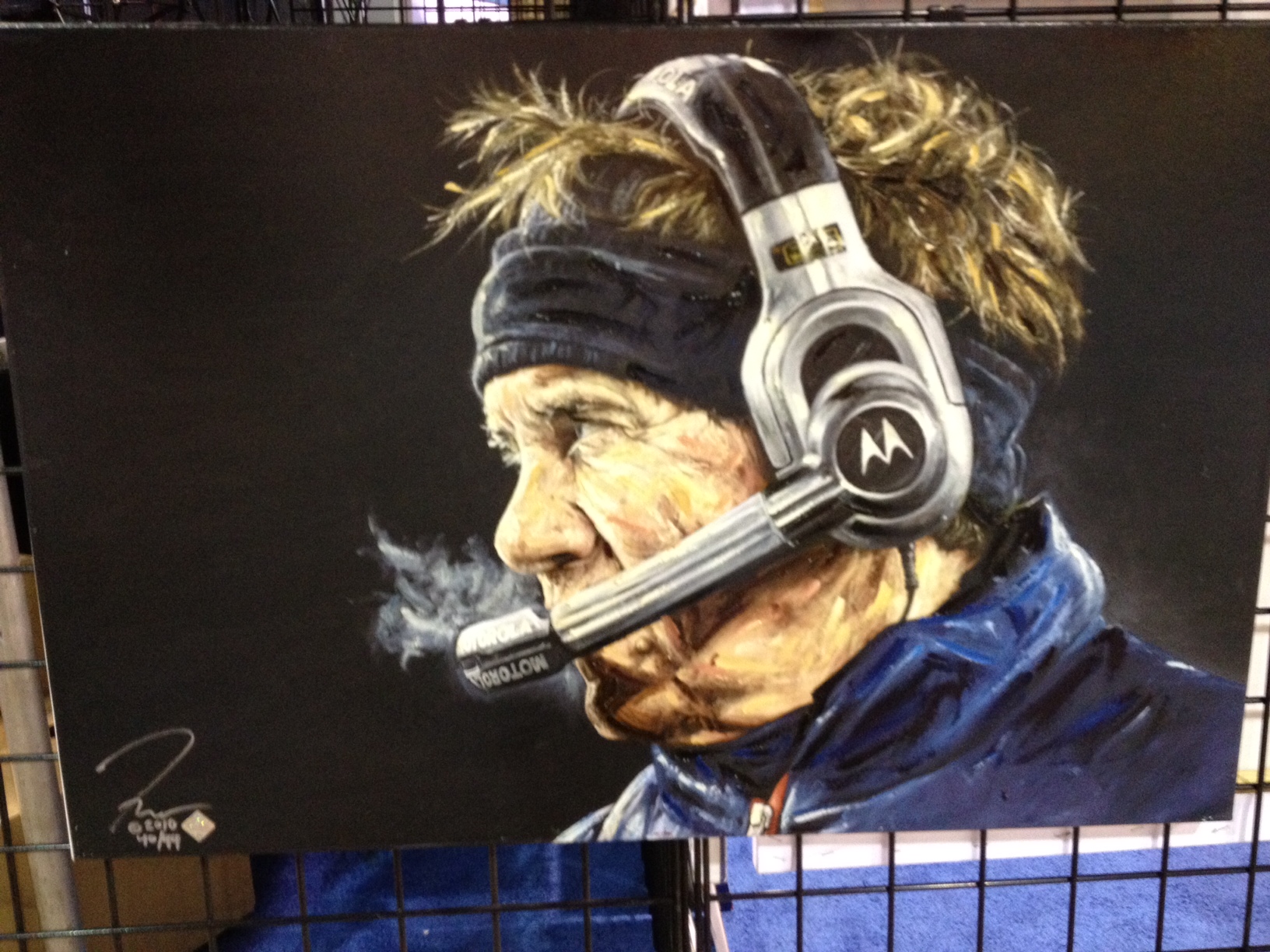 BS: I don’t know if the sports oil painting market won’t die, or if it ever lived in the first place. 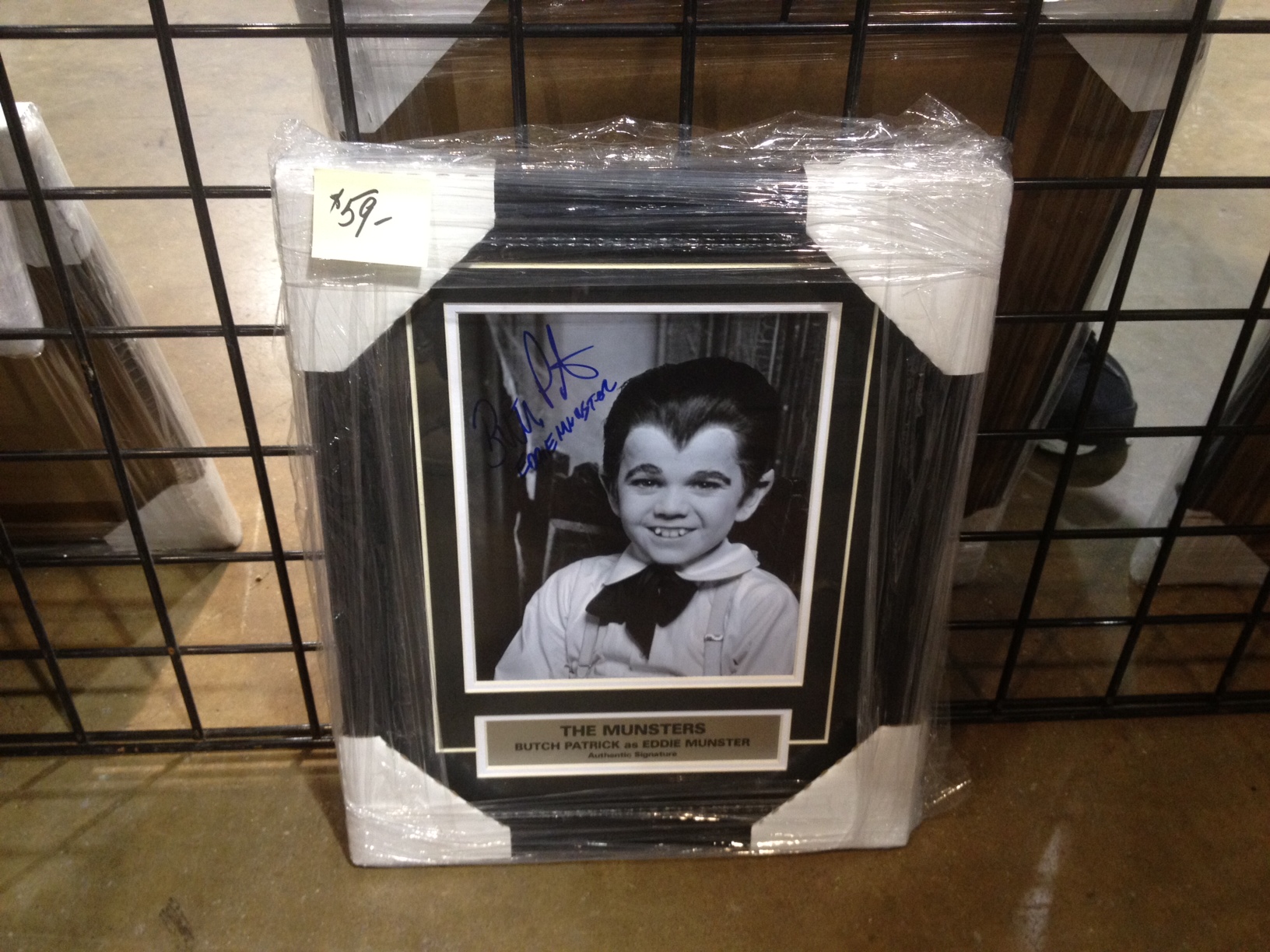 BS: “Excuse me, I’m looking for a framed, autographed photo of a television character who hasn’t been relevant in 30 years, and I only have 60 dollars to spend … ”

RB: I’m genuinely mad I didn’t purchase this. This would be my “Jalen’s Bat.” 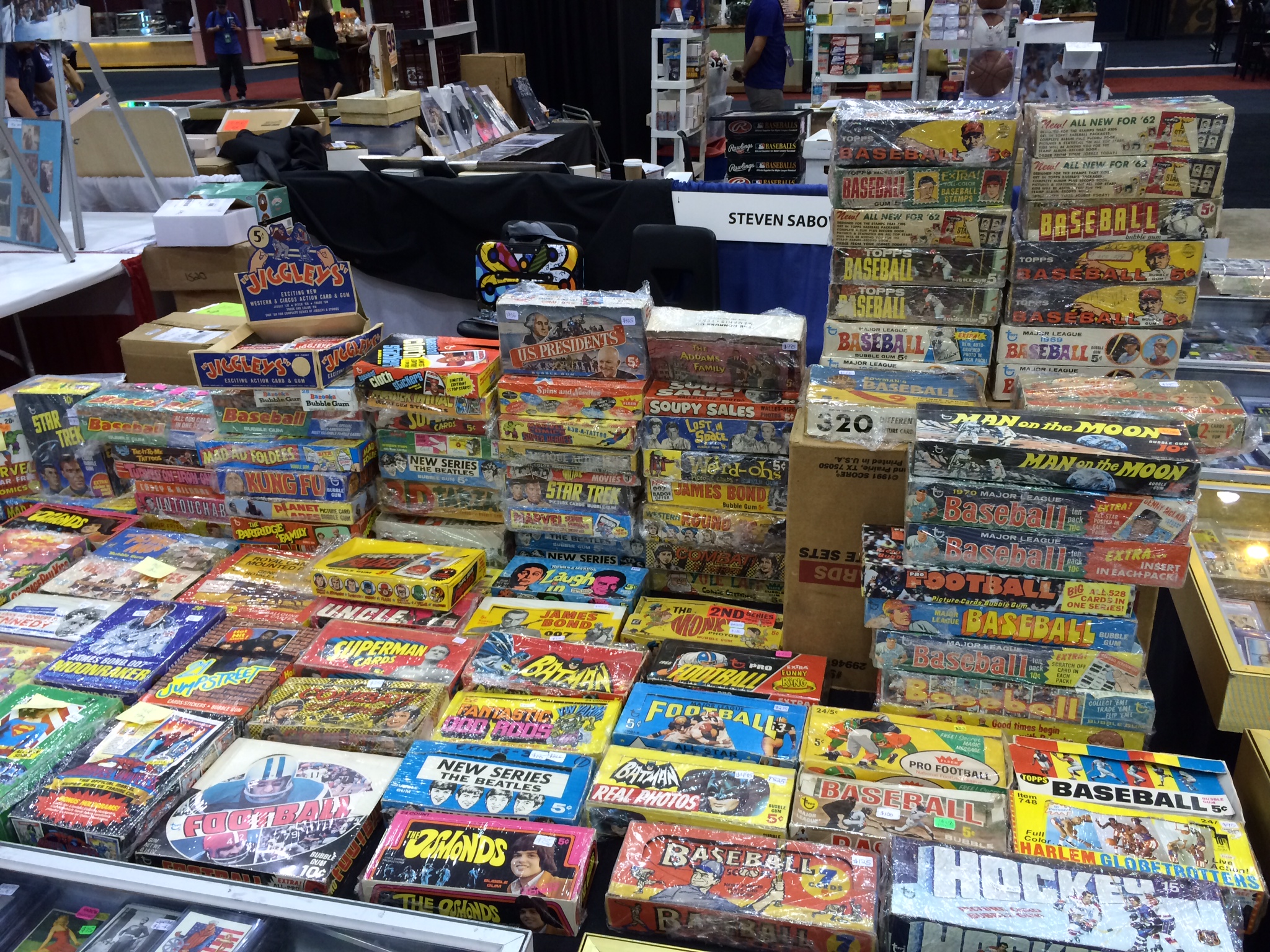 BS: A collector convention tradition — the new guy seeing the booth with hundreds of different Topps boxes, losing his mind, then splurging on a goofy box of pop-culture cards that he has to lug around all day (instead of just waiting until the end of the day). I love when this happens. FRESH FISH! FRESH FISH! FRESH FISH!

RB: I spent more money at this booth than I’d like to admit. BUT THERE WAS A BOX FULL OF FAMILY MATTERS CARDS. WHAT WAS I SUPPOSED TO DO? 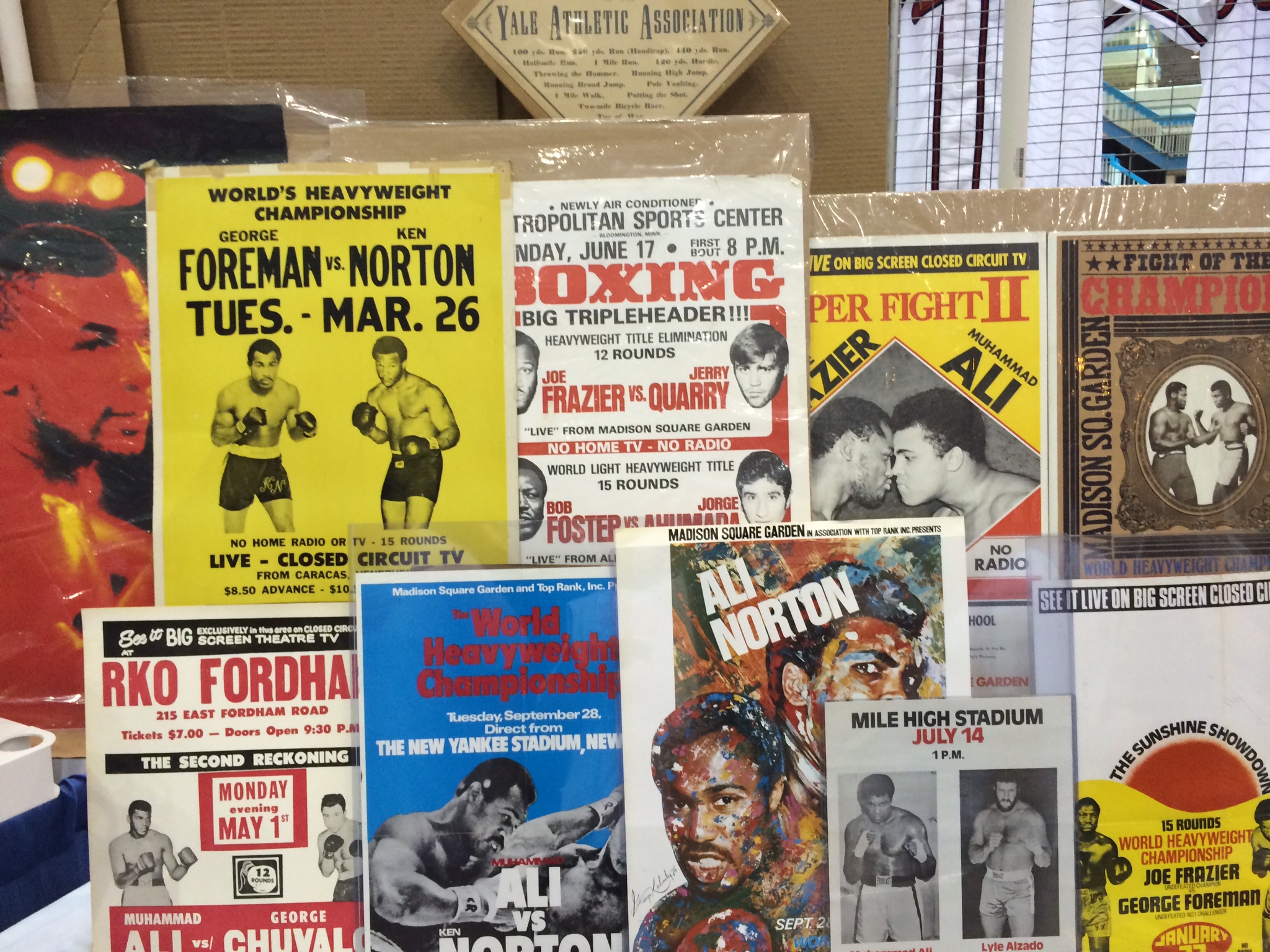 BS: I regard the Ali posters the same way I regard cocaine — if I made one purchase, all of a sudden I wouldn’t be able to stop, and suddenly I’d be broke and divorced.

RB: I regard the Ali posters the same way I regard Natty Ice — if I made one purchase, all of a sudden I wouldn’t be able to stop, and suddenly I’d be broke and divorced. 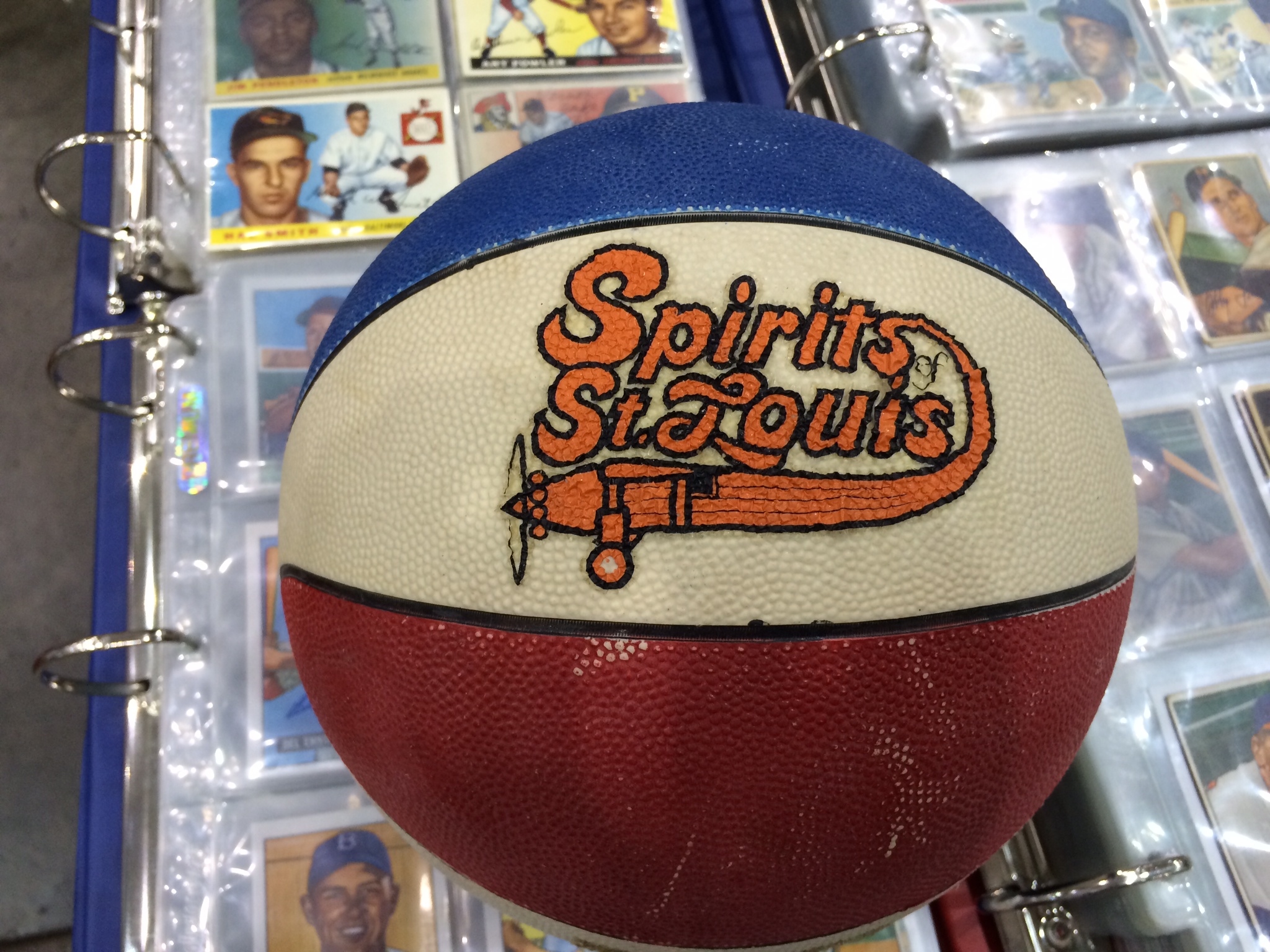 BS: Wednesday’s VIP auction kicks off the five-day convention (five days!!!) and provides a first look at premier items for serious buyers, who race through the aisles right after the doors open looking for one-of-a-kind collectibles. You’re right, 99 percent of these collectors aren’t in good enough shape to race anywhere. Let’s call it a semi-brisk stroll. But that first hour is crucial — that’s when you see one-of-a-kind stuff like this vintage Spirits basketball. I missed getting it by about 100 seconds. Dammit. 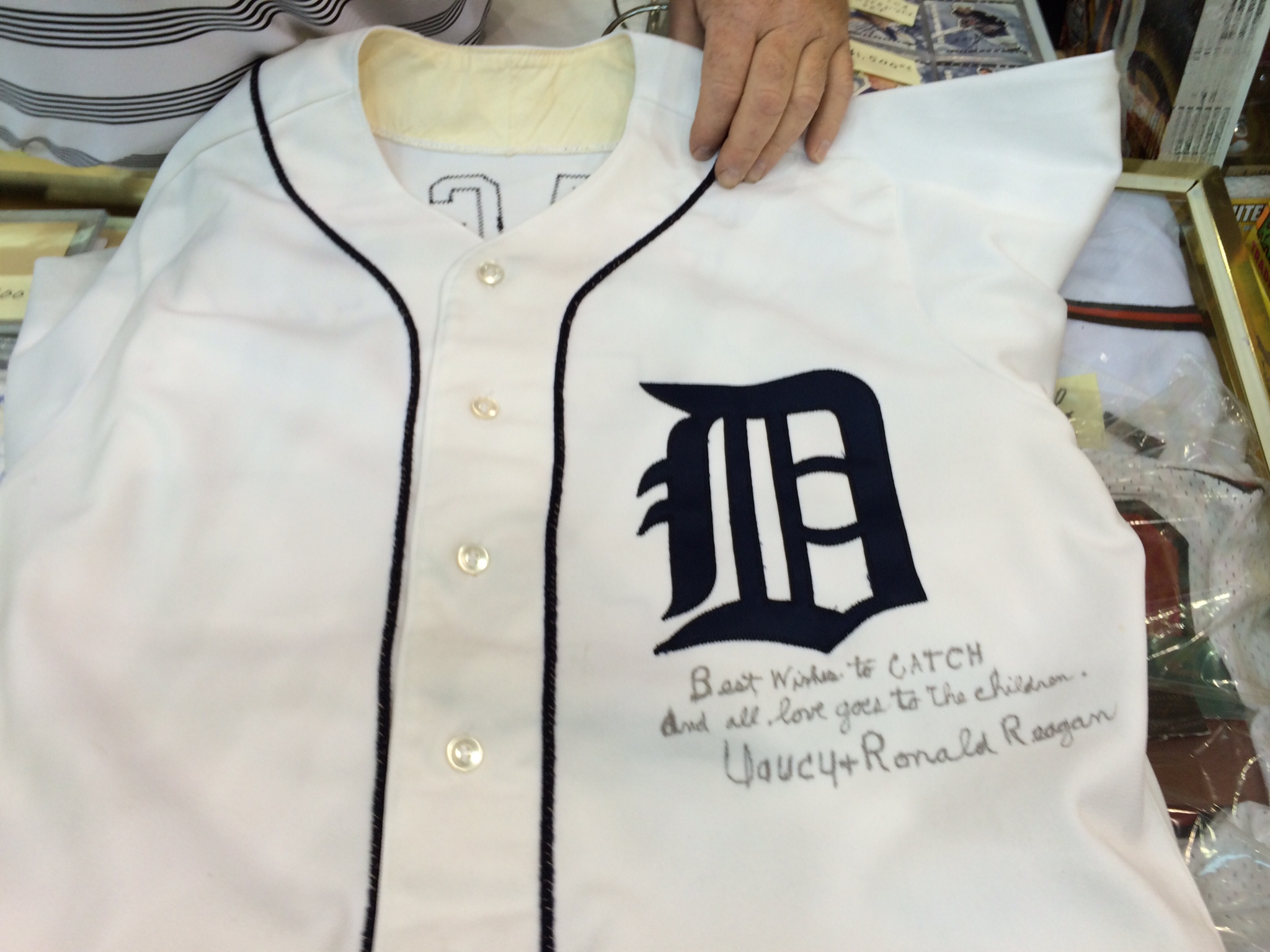 BS: “Best wishes to CATCH, and all love goes to the children.” Whose children? CATCH’s children? Who’s CATCH?”

RB: Again, this is more likely to be my signature. 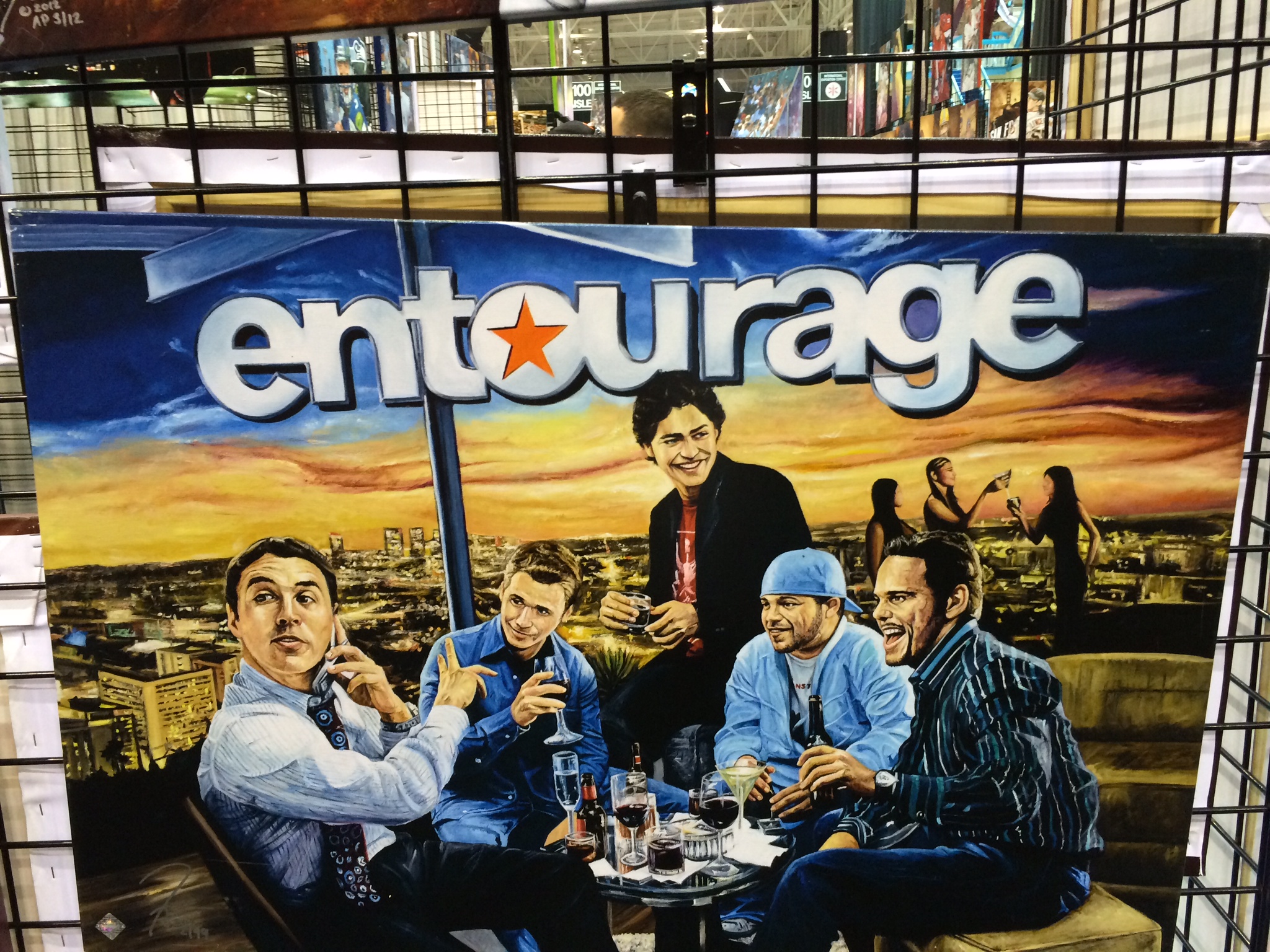 BS: Gave serious thought to buying this, putting it in my office, then judging every potential Grantland hire solely by how they reacted to the painting. Maybe there’s still time. 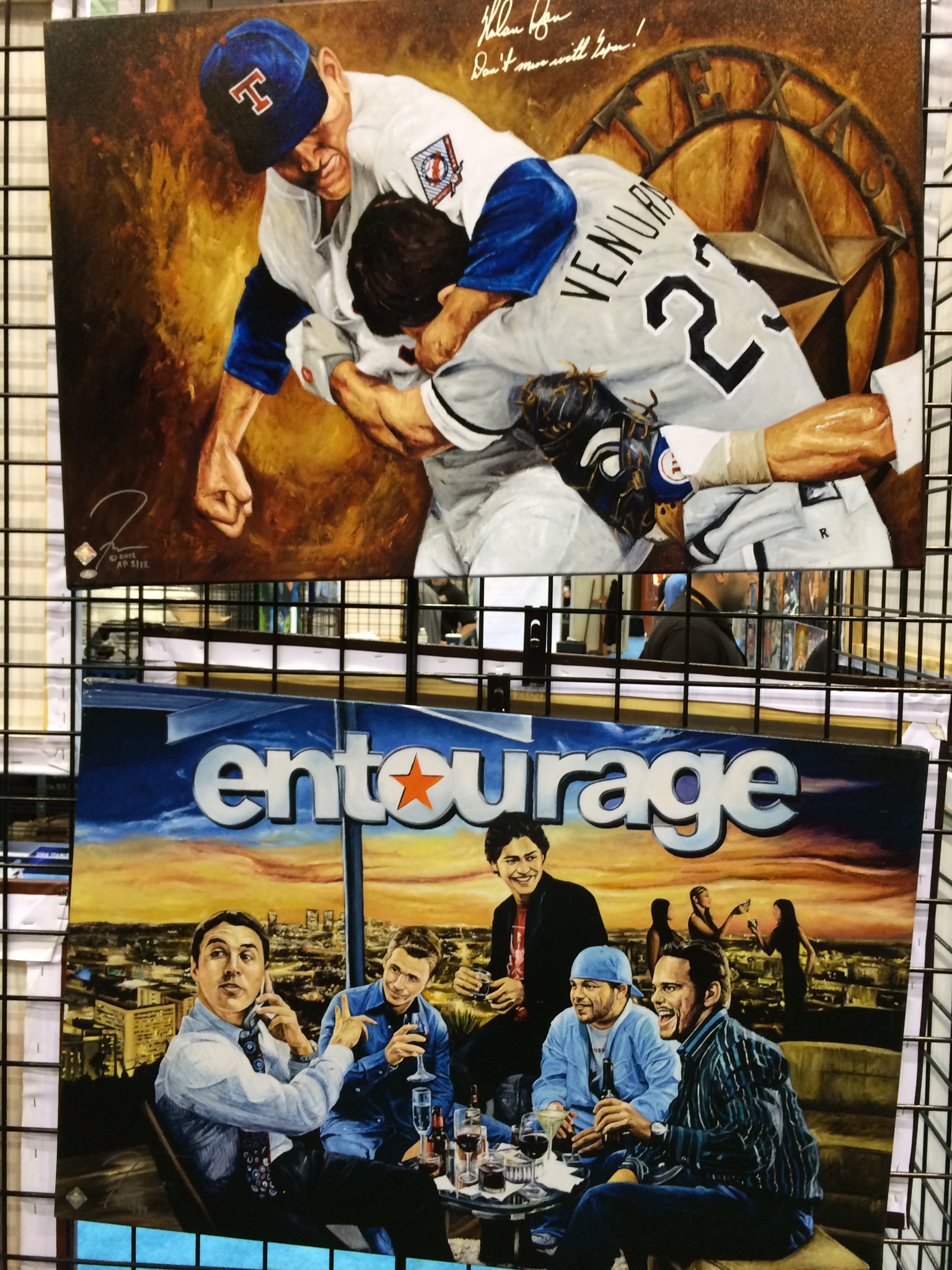 BS: The convention is always loaded with autographed photos of Nolan Ryan beating the hell out of Robin Ventura. My theory: Ryan signs as many as possible to keep antagonizing Ventura, and eventually it’s going to lead to them fighting again.

BS: Well, Ryan upped the stakes in 2014 by signing an OIL PAINTING of him kicking the shit out of Ventura. Displayed with the Entourage oil painting, this is everything I ever wanted from the Collectors Convention. It’s the Bird and Magic of display items.

THINGS YOU LEARN DURING THE COLLECTORS CONVENTION 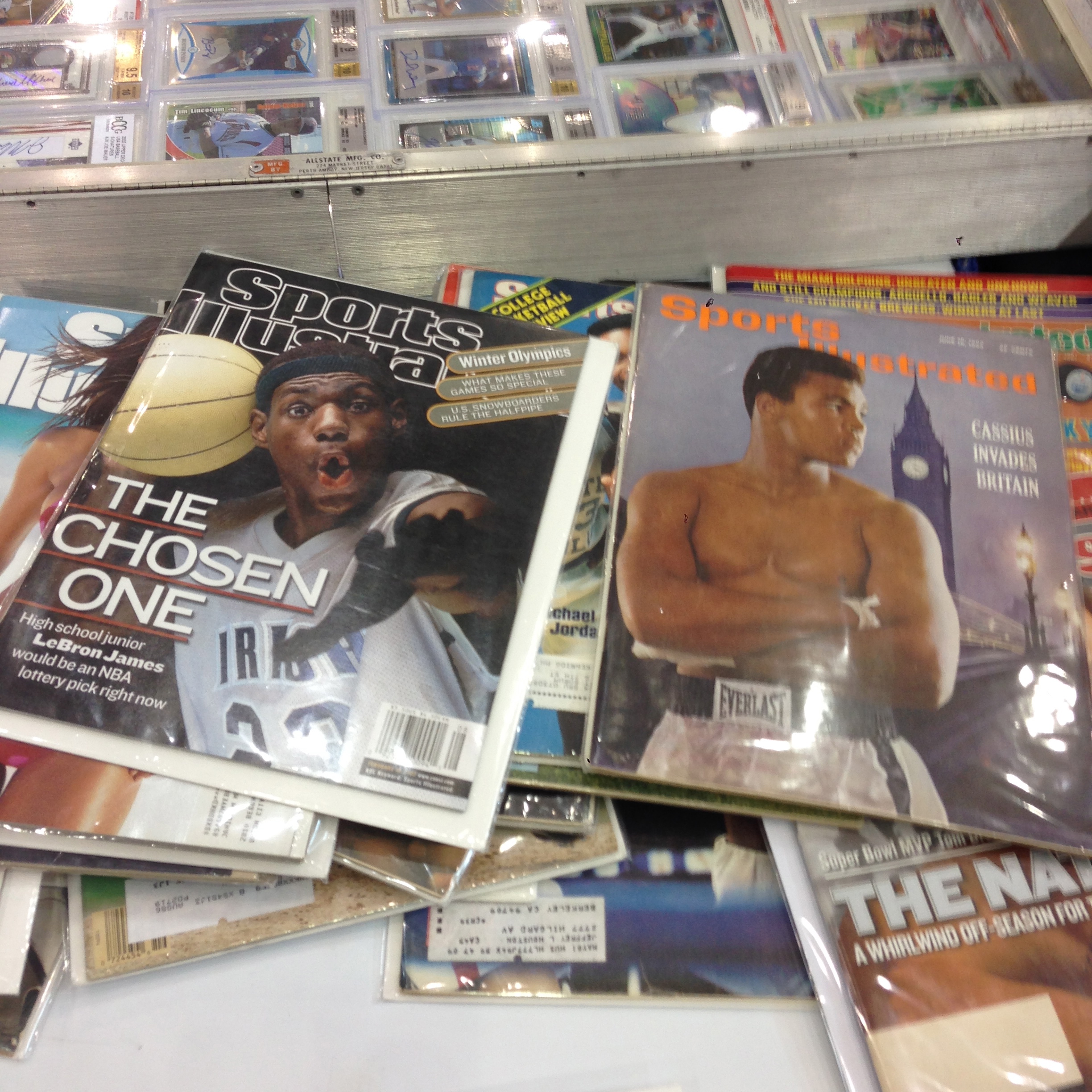 BS: I kept telling Rem not to get lost in the mags and programs. You’ll lose two hours. It’s like falling into an abyss, and you can get any of them on eBay. I thought he heard me, I really did. Then we got separated and I stumbled into him later, and, well …

RB: I didn’t buy the LeBron one, because it’s sitting in my room in my mom’s house right now. But I did consider buying every other magazine I saw. Because I love magazines. LONG LIVE PRINT, BILL. THE INTERNET IS ABOUT TO DIE. JUST WAIT ON IT. GET OUT WHILE YOU CAN.

BS: The lesson: Stay away from mags and programs. 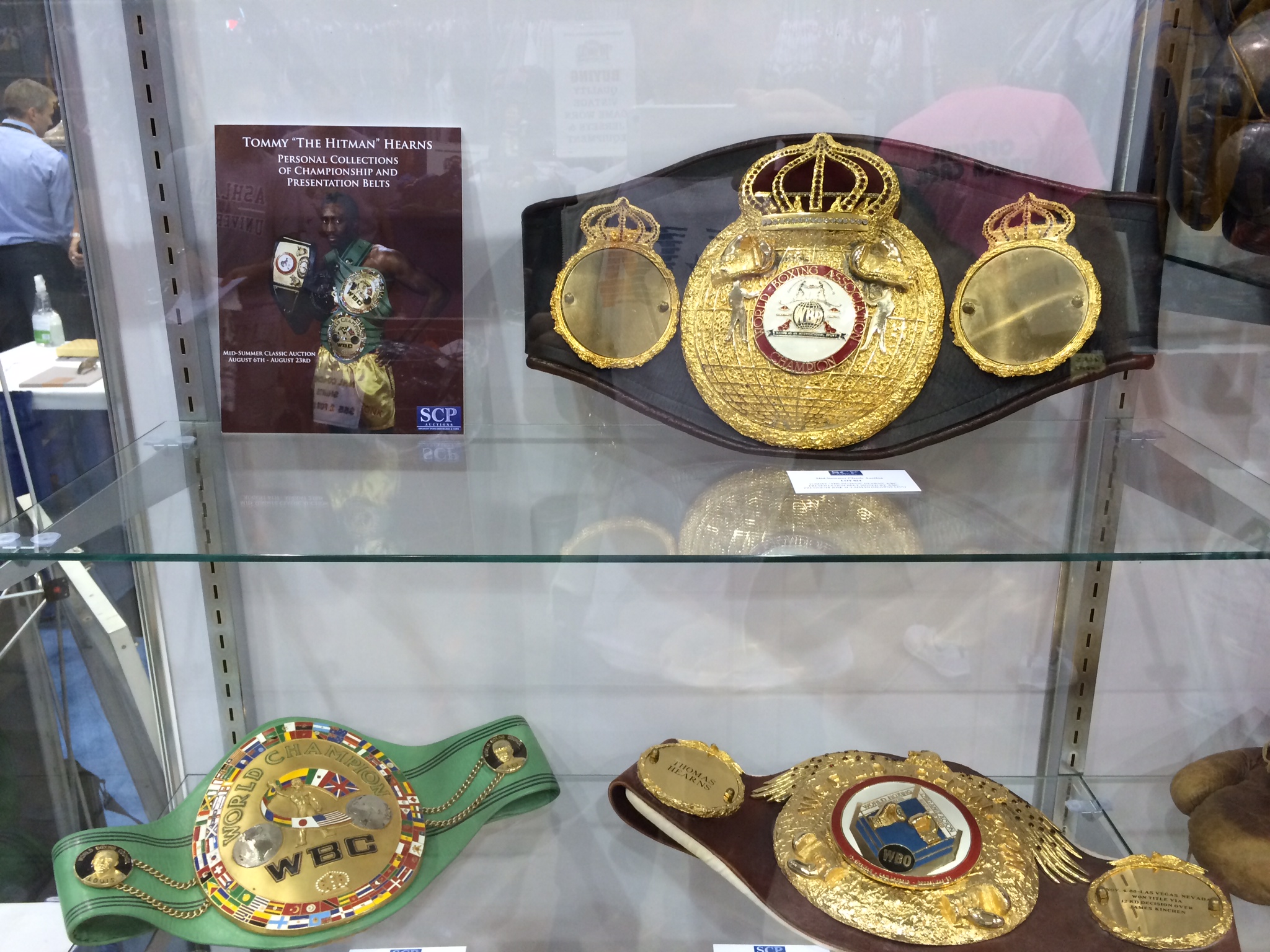 BS: A depressing subplot from every convention — realizing which famous athletes went broke enough to start shamelessly hawking their most prized possessions.

RB: I can’t wait to start doing this with blog posts in about six years. 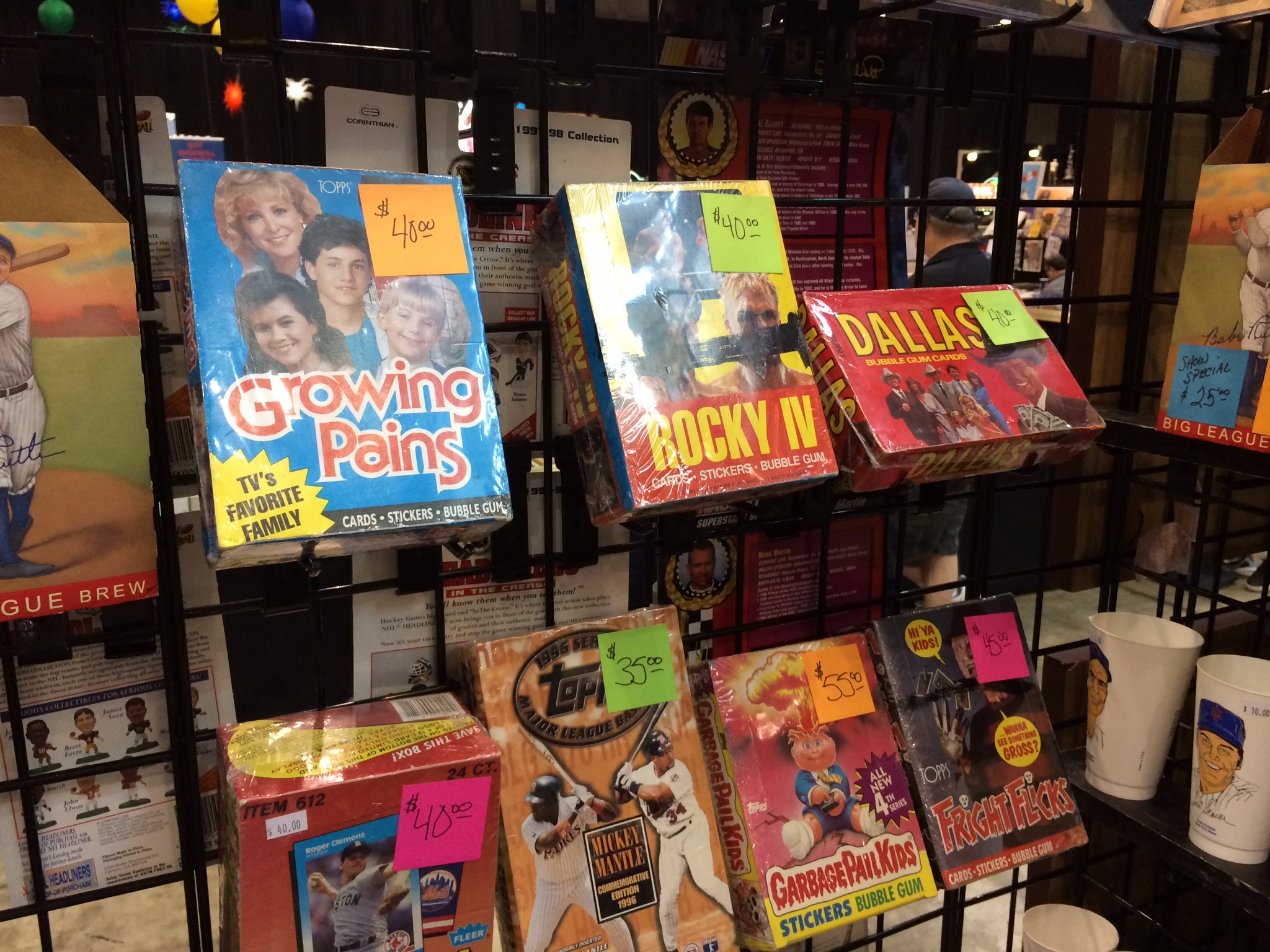 BS: Saw these boxes for $40 apiece, then saw them somewhere else one hour later for less than $40 combined. Seemed like a cheap price for the chance at multiple Ivan Drago and Boner Stabone rookie cards. The lesson: Always shop around if you’re buying pop-culture boxes.

RB: Again, I spent way too much money on pop-culture card boxes. I just can’t believe they ever existed. Got too excited.

BS: I can’t wait until your future wife throws out that Family Matters box in 12 years without telling you. 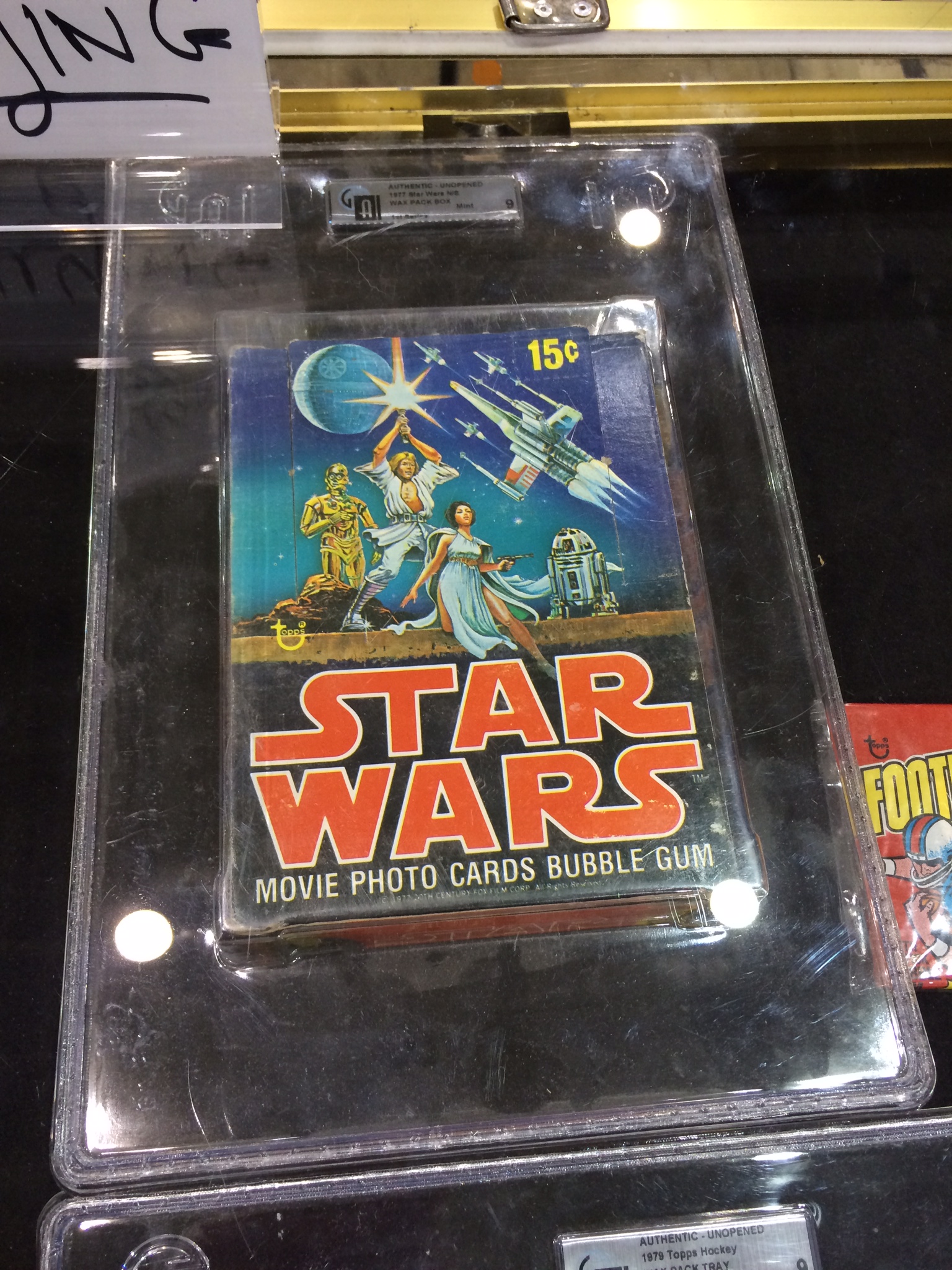 BS: You know what people will always love collecting? Mickey Mantle and Star Wars. In that order. They were asking $1,600 for this unopened box of Star Wars cards.

BS: If Mickey Mantle held Luke Skywalker’s light saber and then signed it in 1978, and someone brought that light saber to Cleveland 36 years later, we’d eventually be making a 30 for 30 about the first-ever collectors convention riot called Collecting Hell. 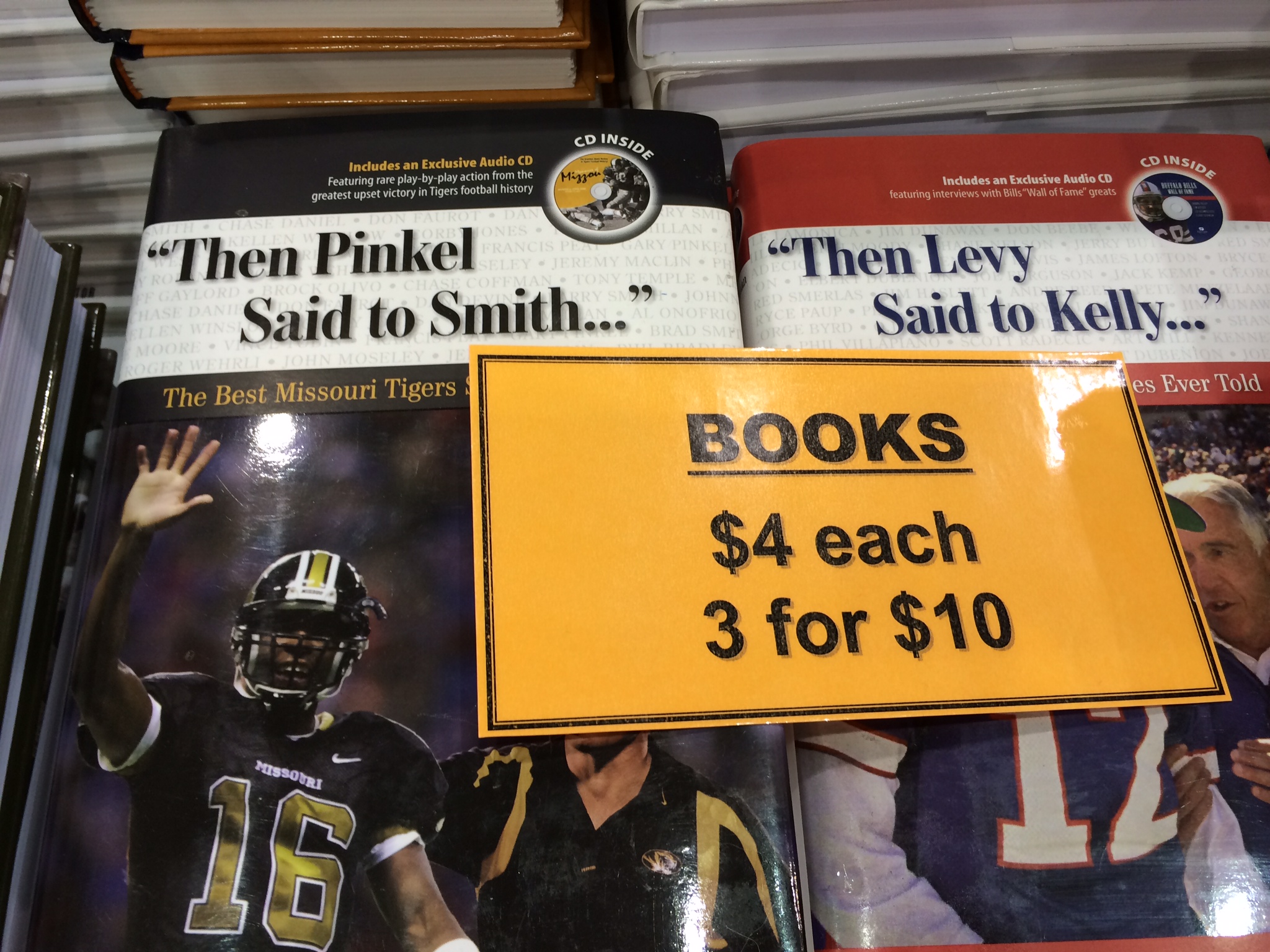 BS: I’ve always been amused by the Best Sports Stories Ever Told series, which started with And Then Jack Said to Arnie (a 1992 book of golf stories), then snowballed into dozens of increasingly obscure Then [Blank] Said to [Blank] books, until finally Then Pinkel Said to Smith happened. Pull up a chair, America, it’s time for some Missouri football stories!

RB: I want to write Then Jacoby Said to Abrams. I’d write it for free. Hell, I’d pay to write it. 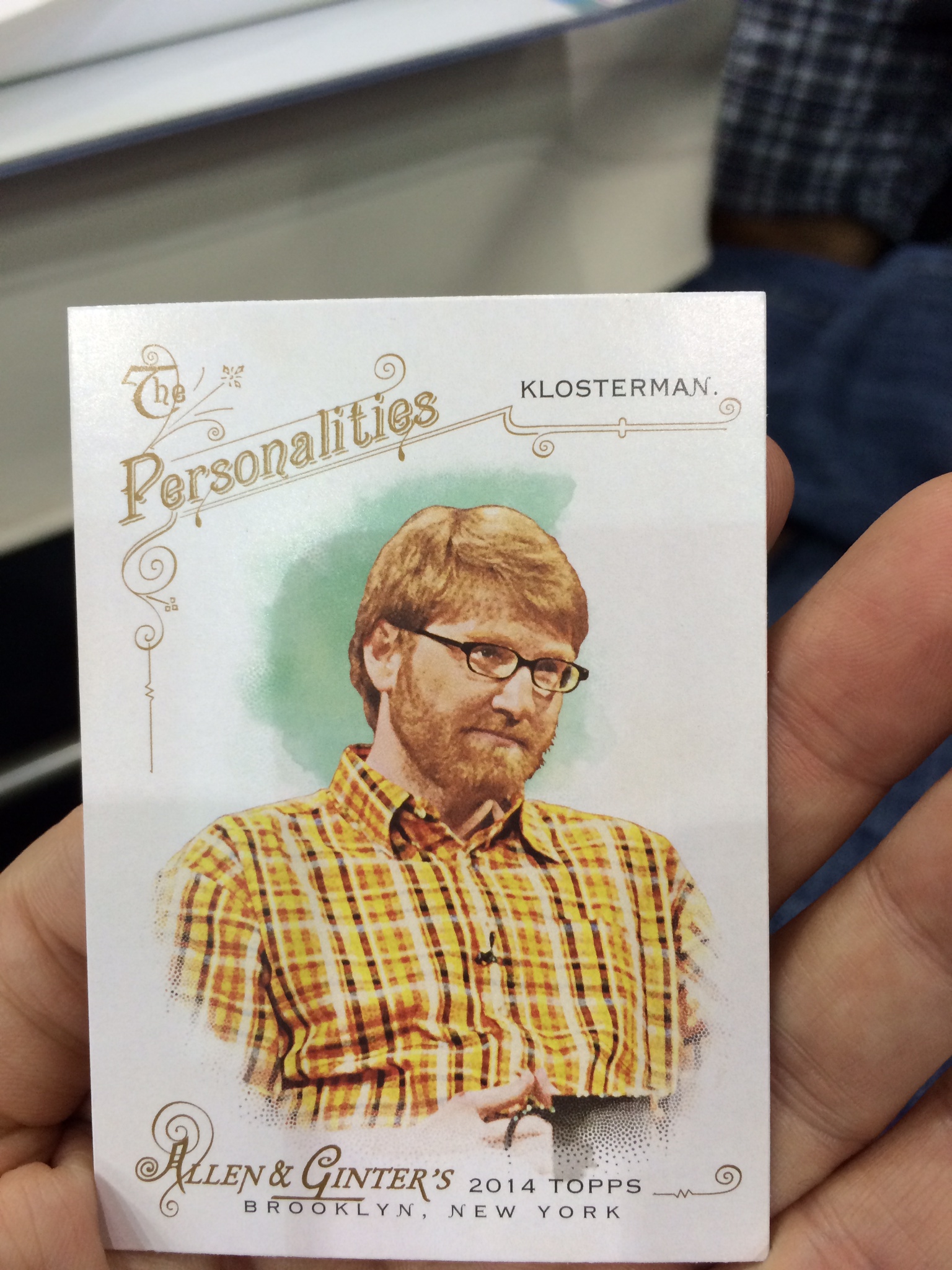 RB: This is sitting on my desk. I look at it every day. Hi, Chuck. 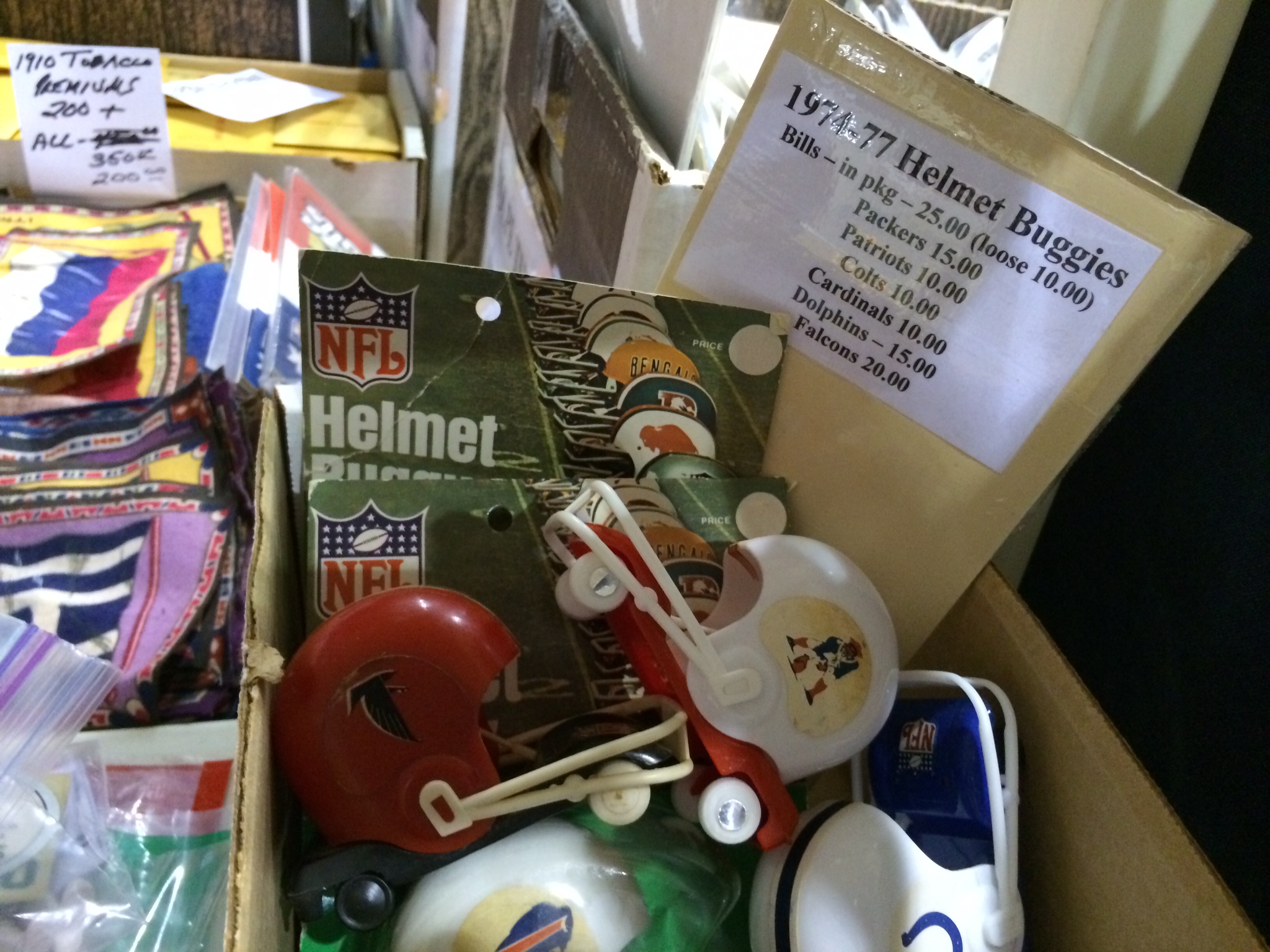 BS: My Patriots have won three Super Bowls, Rem’s Falcons have never won a Super Bowl … but at least Rem will have the most coveted 1970s NFL helmet buggy.

MOST TELLING SIGNS THAT WE WERE IN CLEVELAND 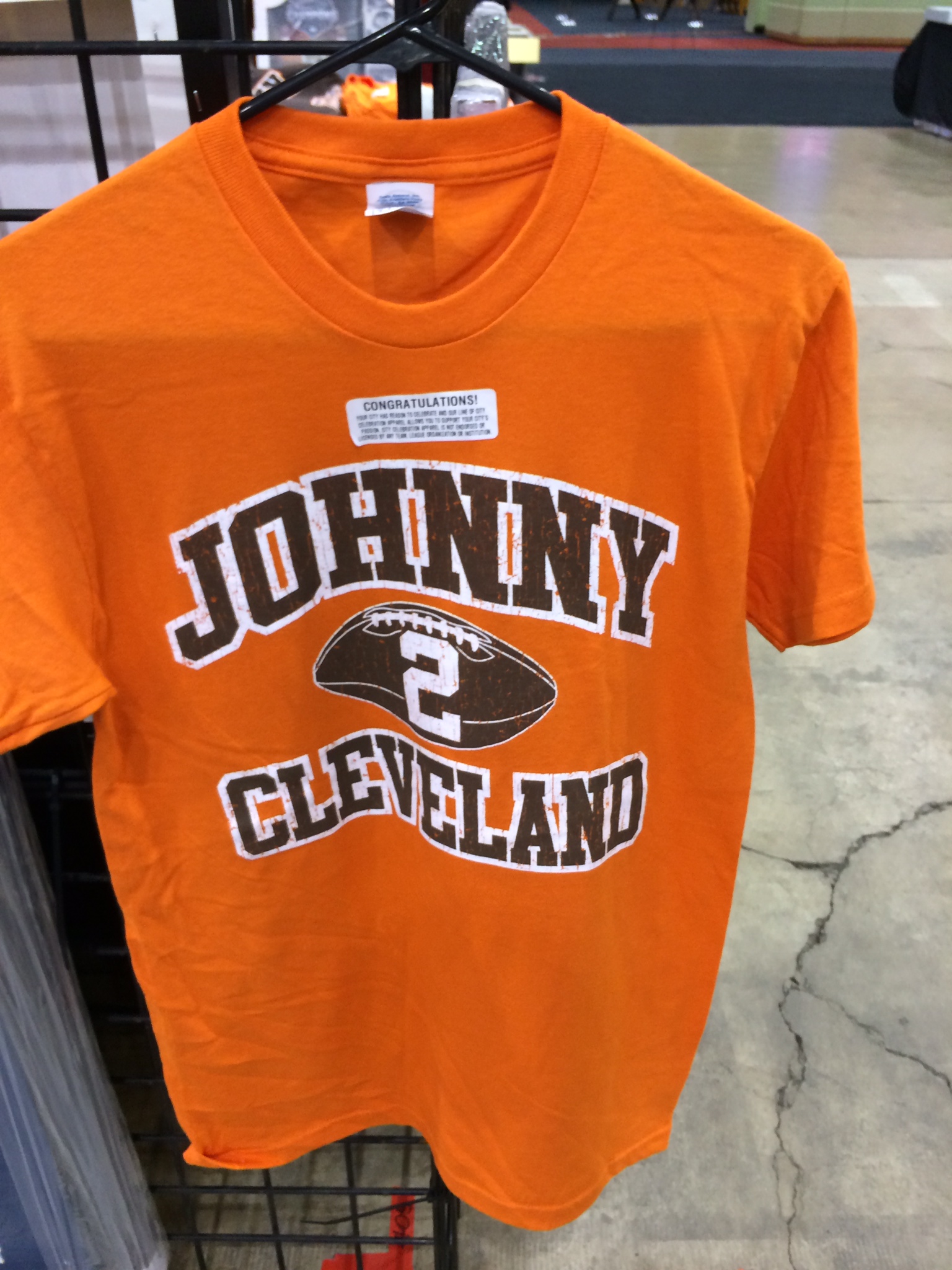 BS: My favorite part of the Johnny Football era — there’s a 15 percent chance he’s headed to the Hall of Fame and an 85 percent chance this T-shirt is headed for the 99-cent discount rack at the 2017 collectors convention. And there’s absolutely no in between.

RB: It’s like the home and away Michael Olowokandi jerseys I had. Except even then, I knew that was more self-hazing than smart investment. I’m pretty sure this was my first act of self-trolling. Not the last. 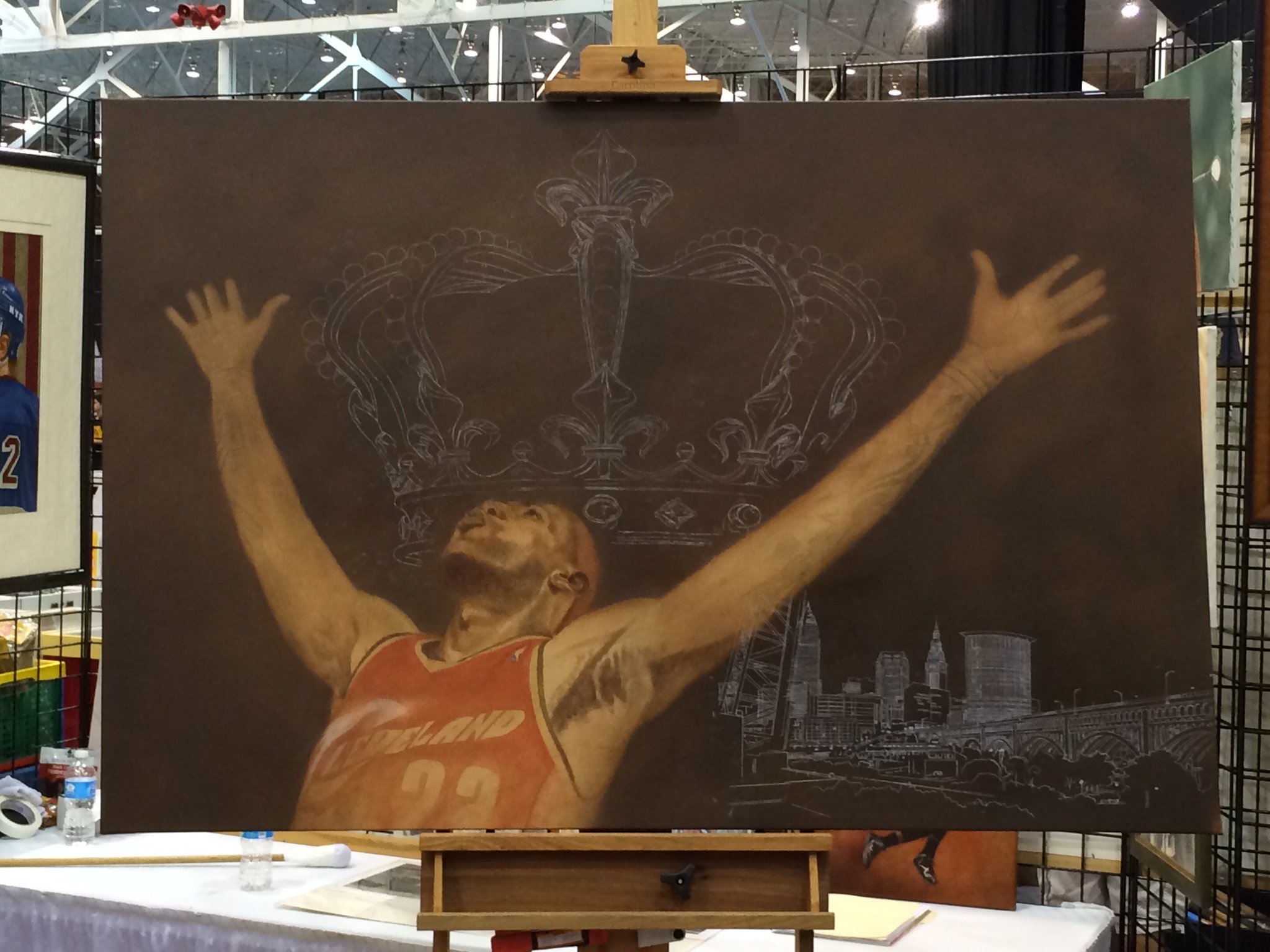 RB: I would throw a fit, because I’m completely over oil paintings, but I’m pretty sure this is a sidewalk chalk piece that I once almost bought in Times Square for $20. 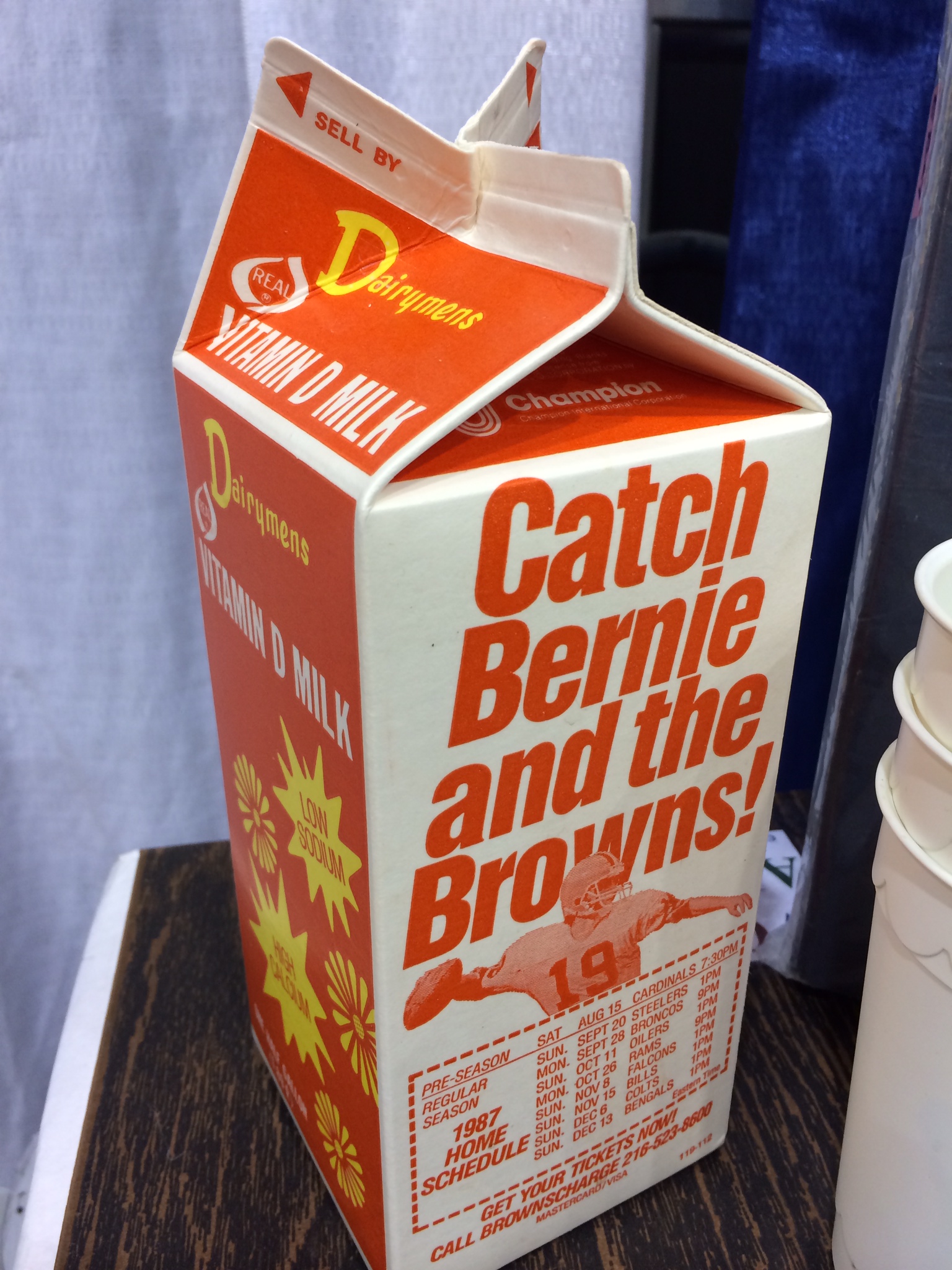 BS: I can’t make fun of this because I would have paid $200 for a vintage Steve Grogan–Patriots milk carton. 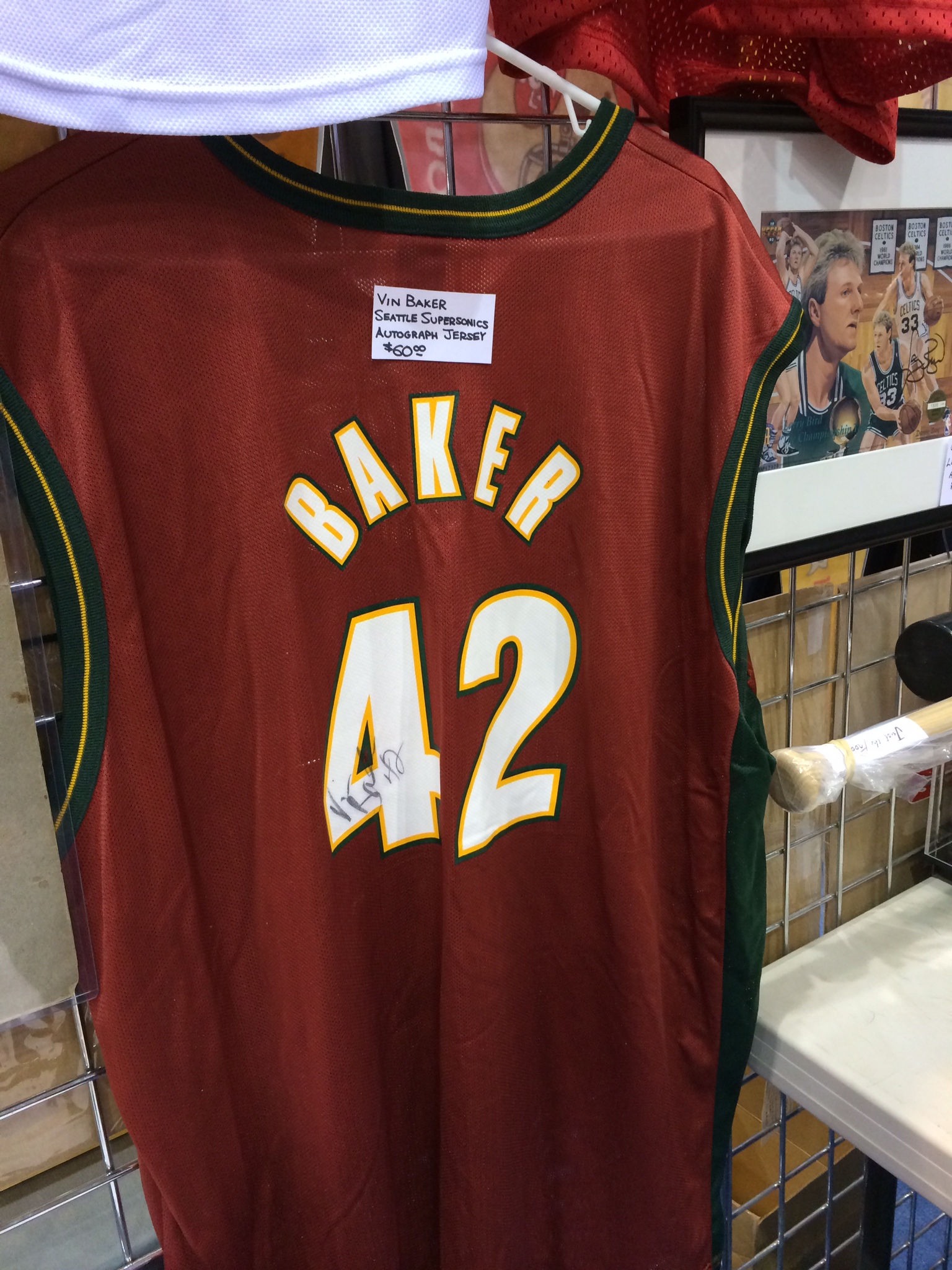 RB: Biggest regret of collectors convention: not buying this jersey for $60 — and then selling it to Vin for $80 (plus shipping). And then using what was left to go buy a milkshake.

BS: We were eyeballing it when the seller wandered over just to say, “Hey, guys, I have some wiggle room on that price.” I can’t tell you how much I love the collectors convention. 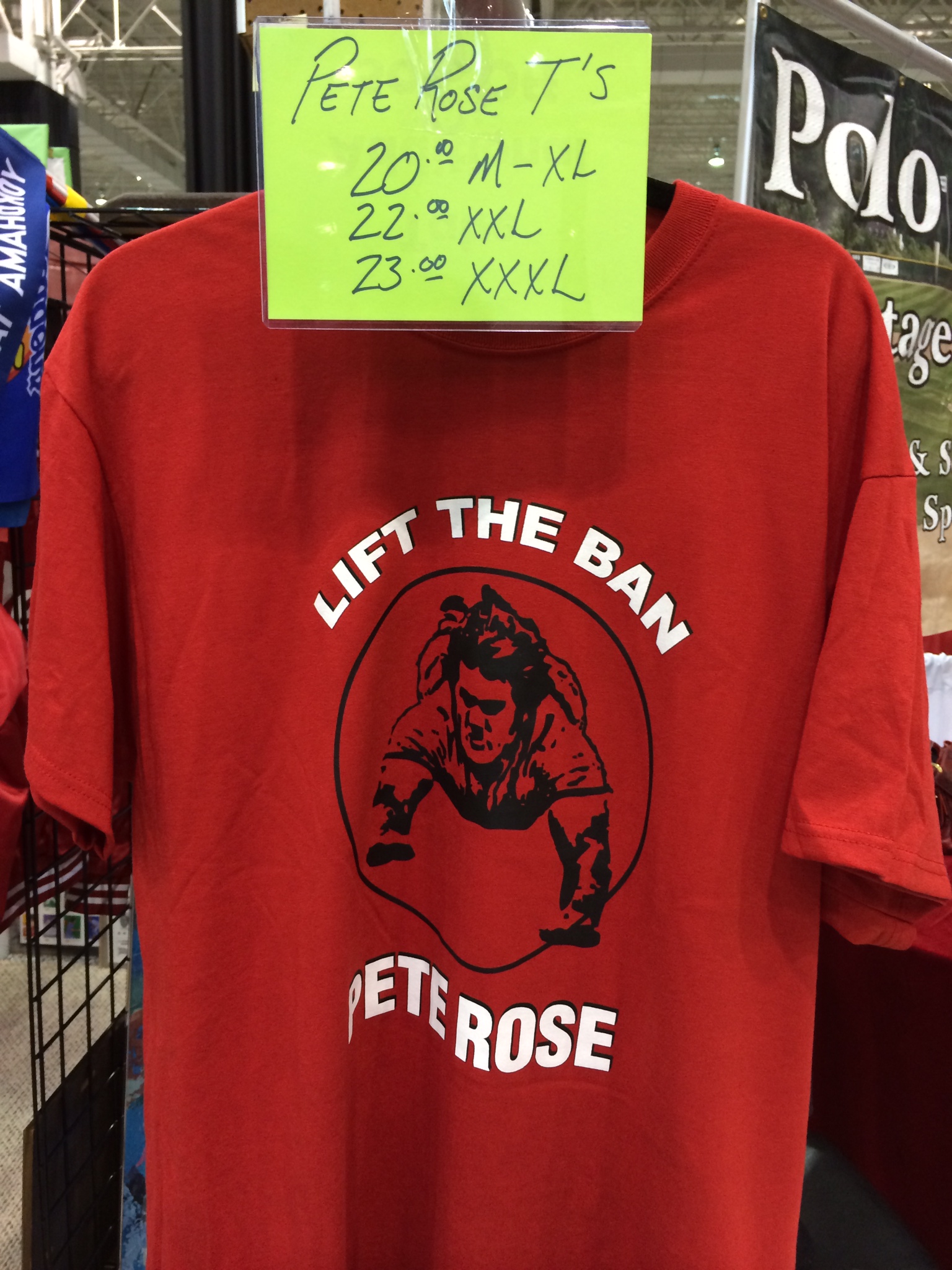 RB: The sizing chart lets you know this shirt is being mass-produced, which genuinely makes me want to ban the T-shirt maker for life.

BS: If you’re walking around the Midwest right now wearing an XXXL “LIFT THE BAN” T-shirt for Pete Rose, you really need to reevaluate things. 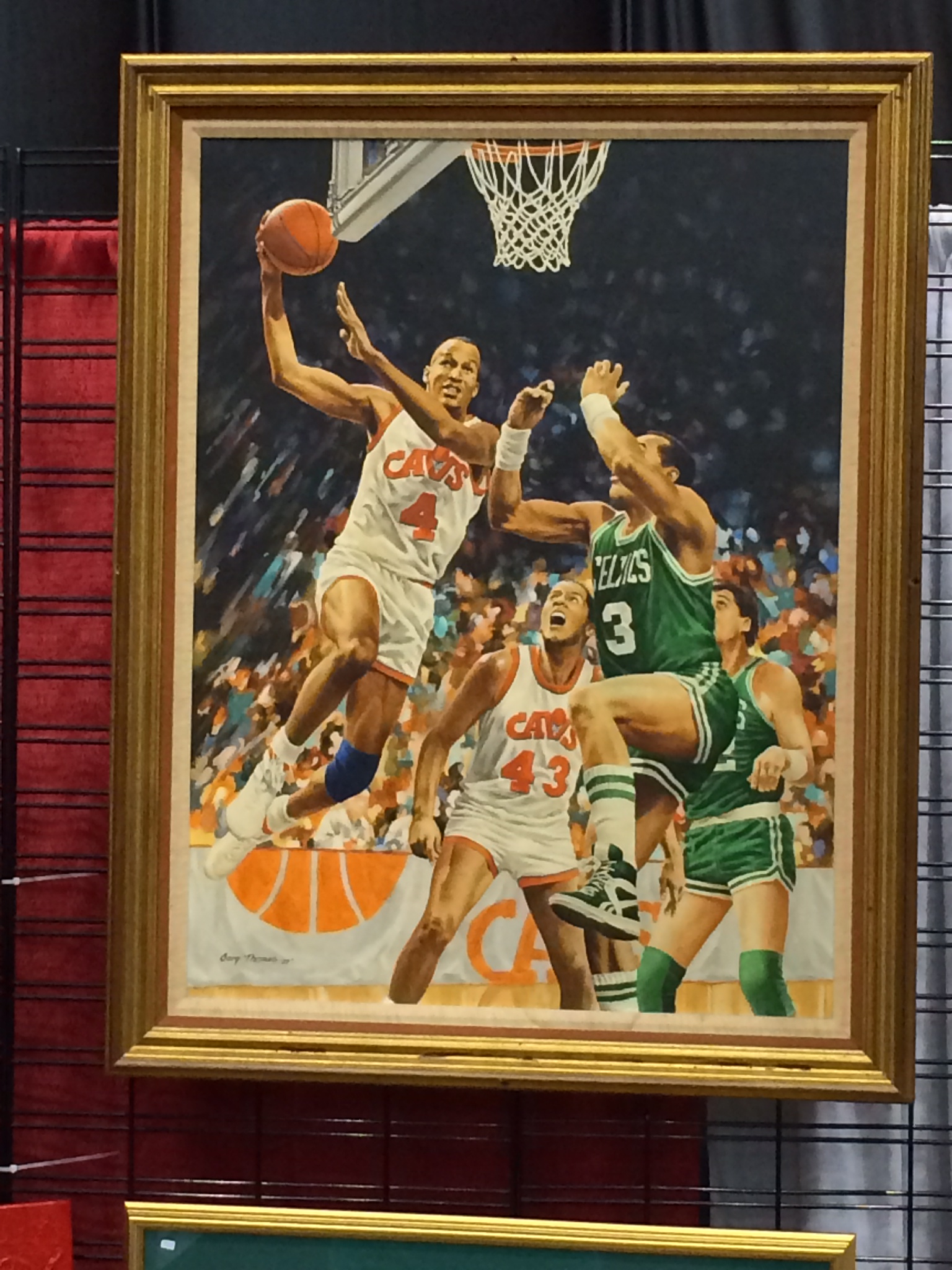 BS: I know you’ve studied dozens of different oil paintings of Ron Harper’s Cavaliers days. Is this the best one?

RB: MORE OIL. GREAT. Weird wrinkle — this is actually the worst Ron Harper Cavs oil-on-canvas. It’s probably why it made it to the convention, since the rest are in the Louvre de Cleveland.