A Visit to the 2014 National Sports Collectors Convention, Part 2

A Visit to the 2014 National Sports Collectors Convention, Part 4 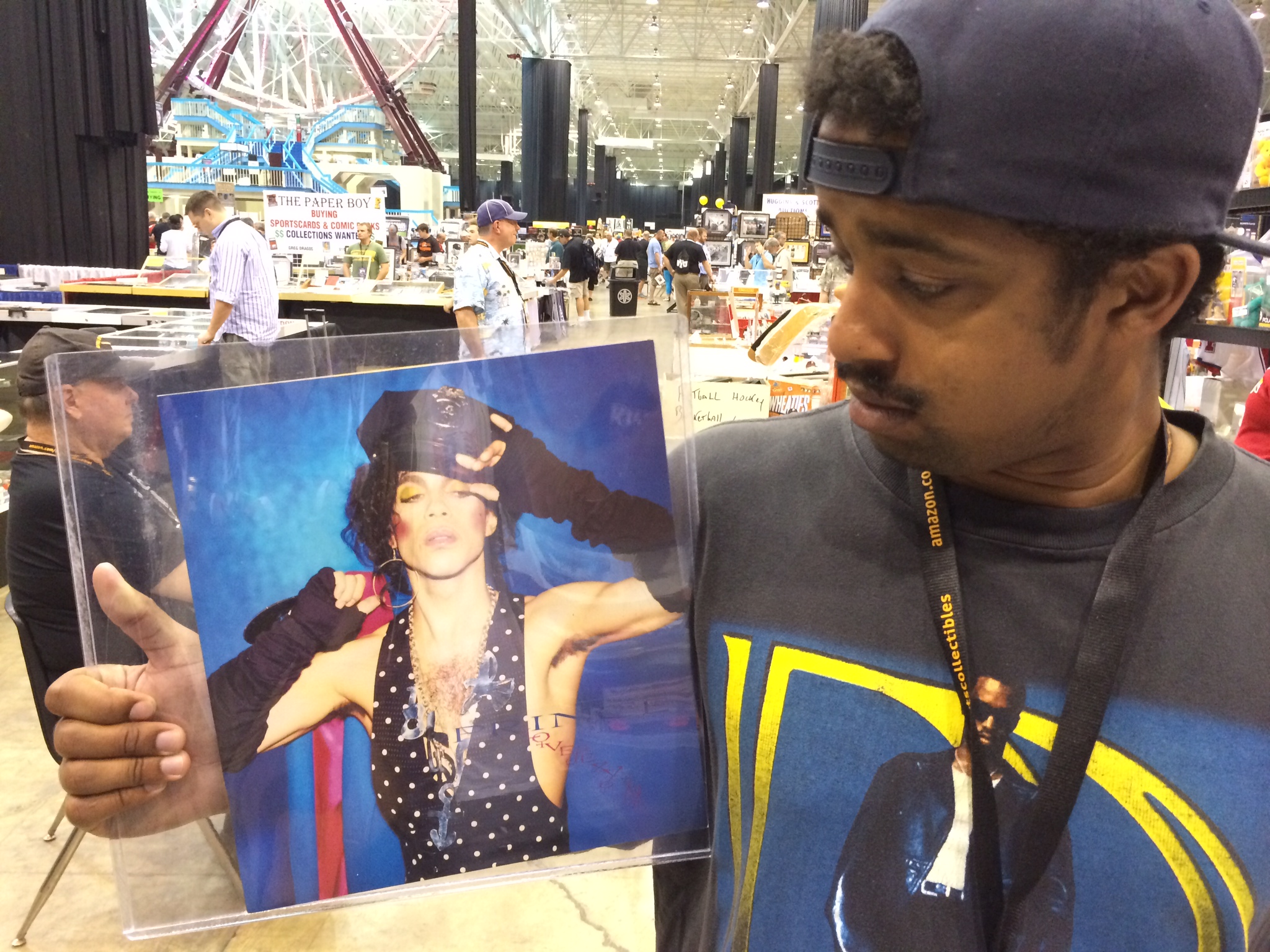 BS: That’s a Prince concert program from the late ’80s. I don’t know if the look on Rem’s face is shock, awe, respect, horror, affection … I just can’t tell. 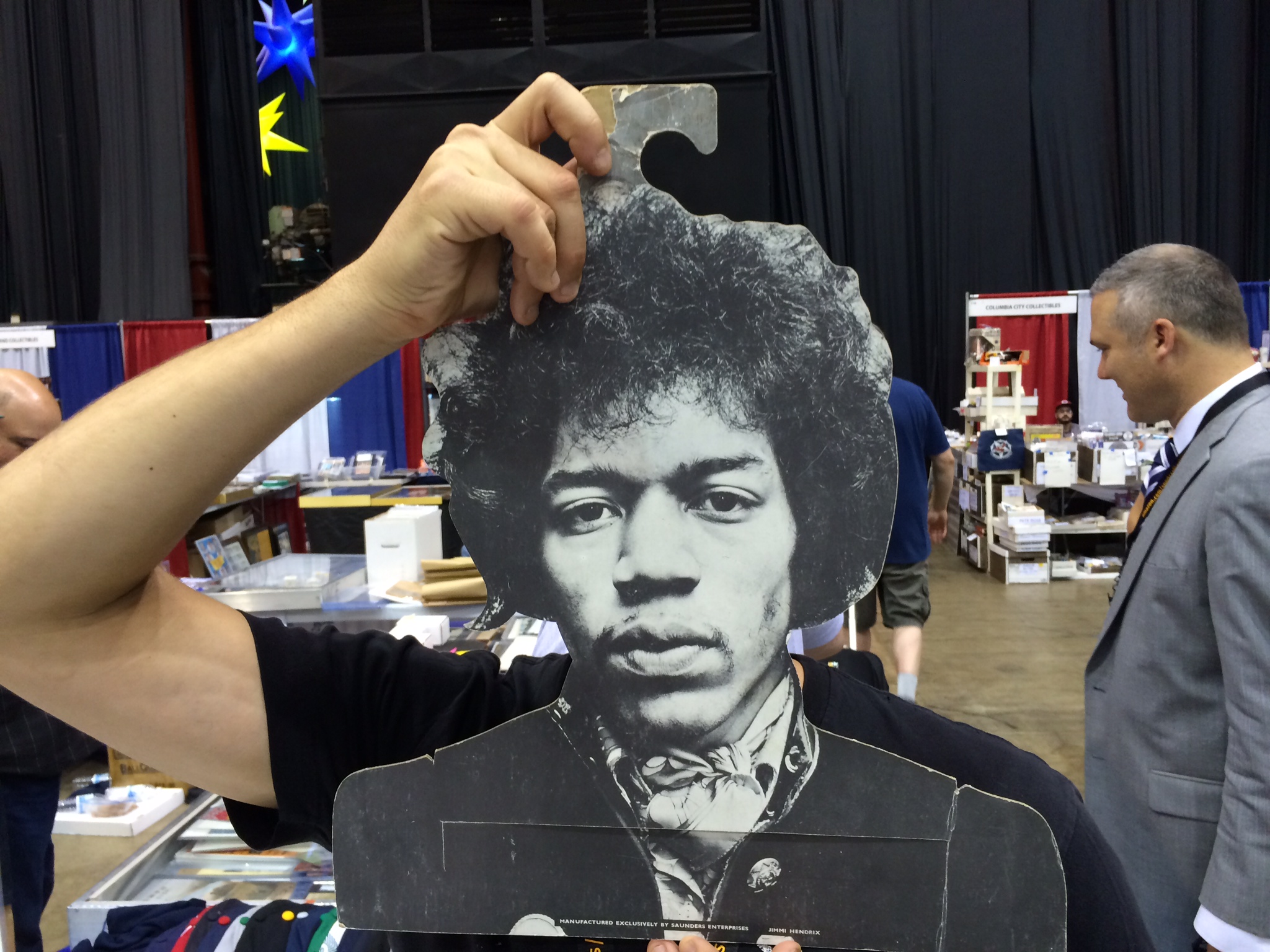 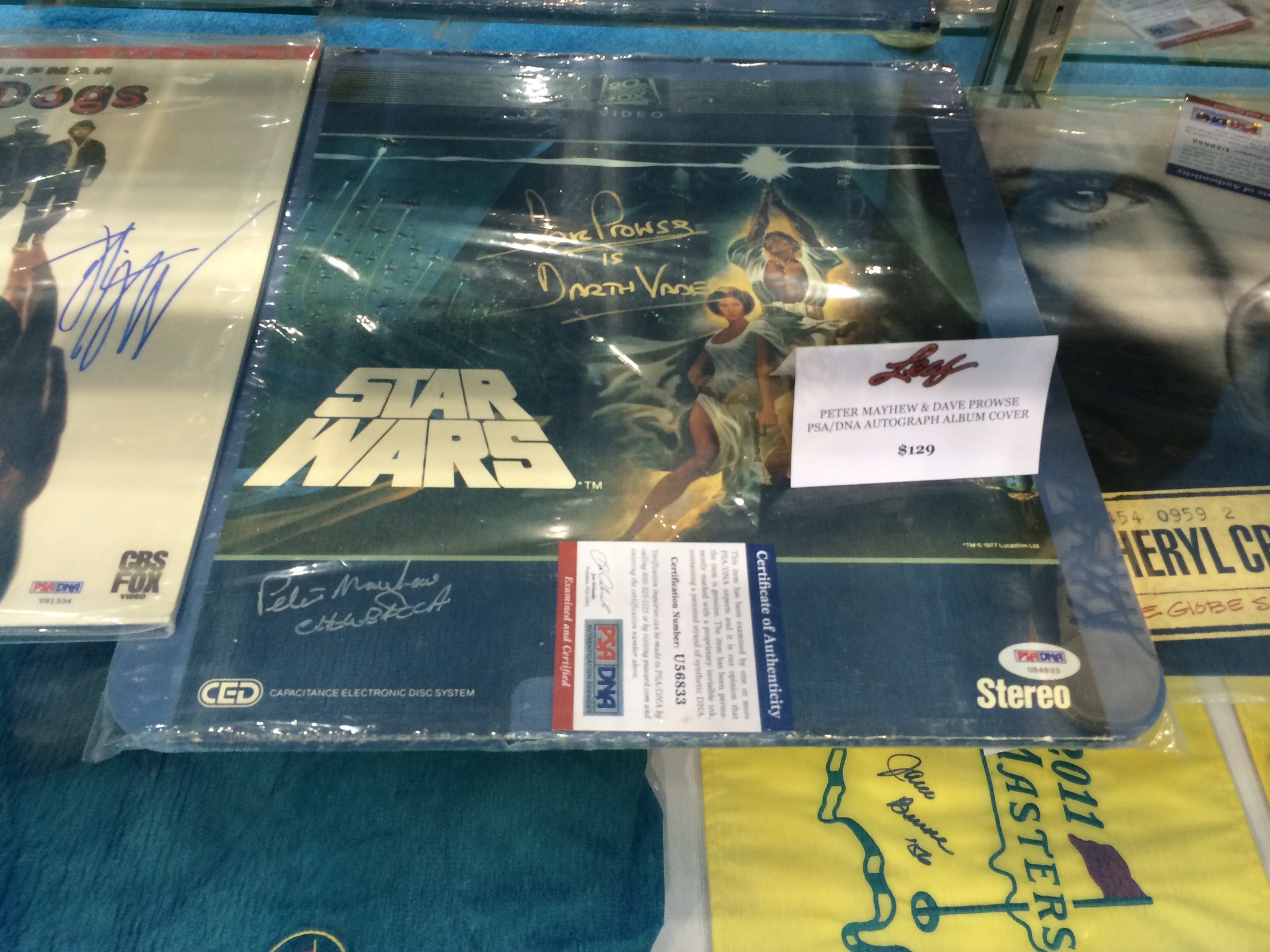 BS: That’s an item autographed by The Guy Who Played Darth Vader for a scant $129. He didn’t even speak! He just walked around in the Vader outfit! If we ever want to boost Grantland’s traffic in the cheapest way possible, I vote for Star Wars Week.

RB: I wonder — what was the price before George Lucas decided to do Red Tails? 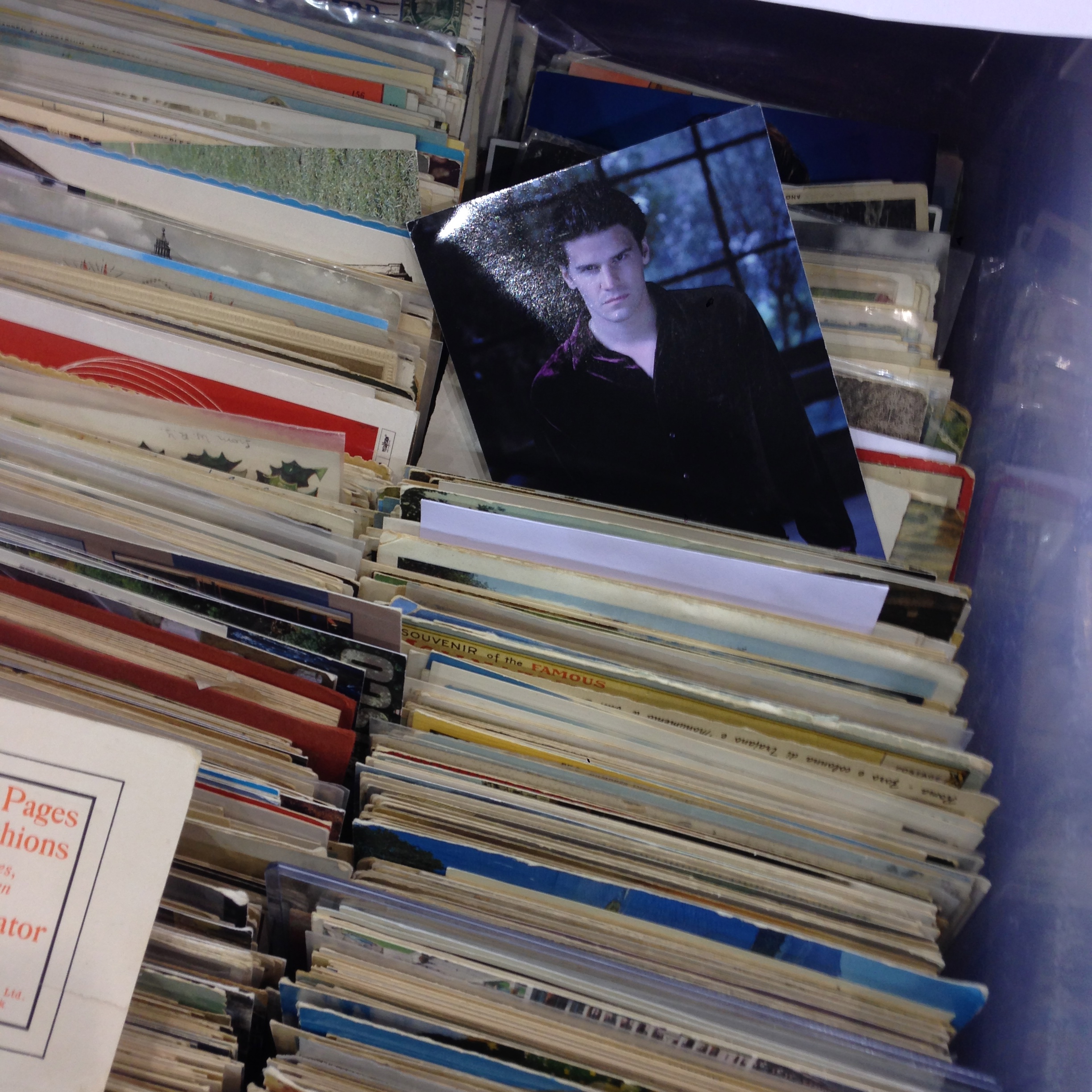 BS: So … why are we including a David Boreanaz photo in this photo essay, Rem? 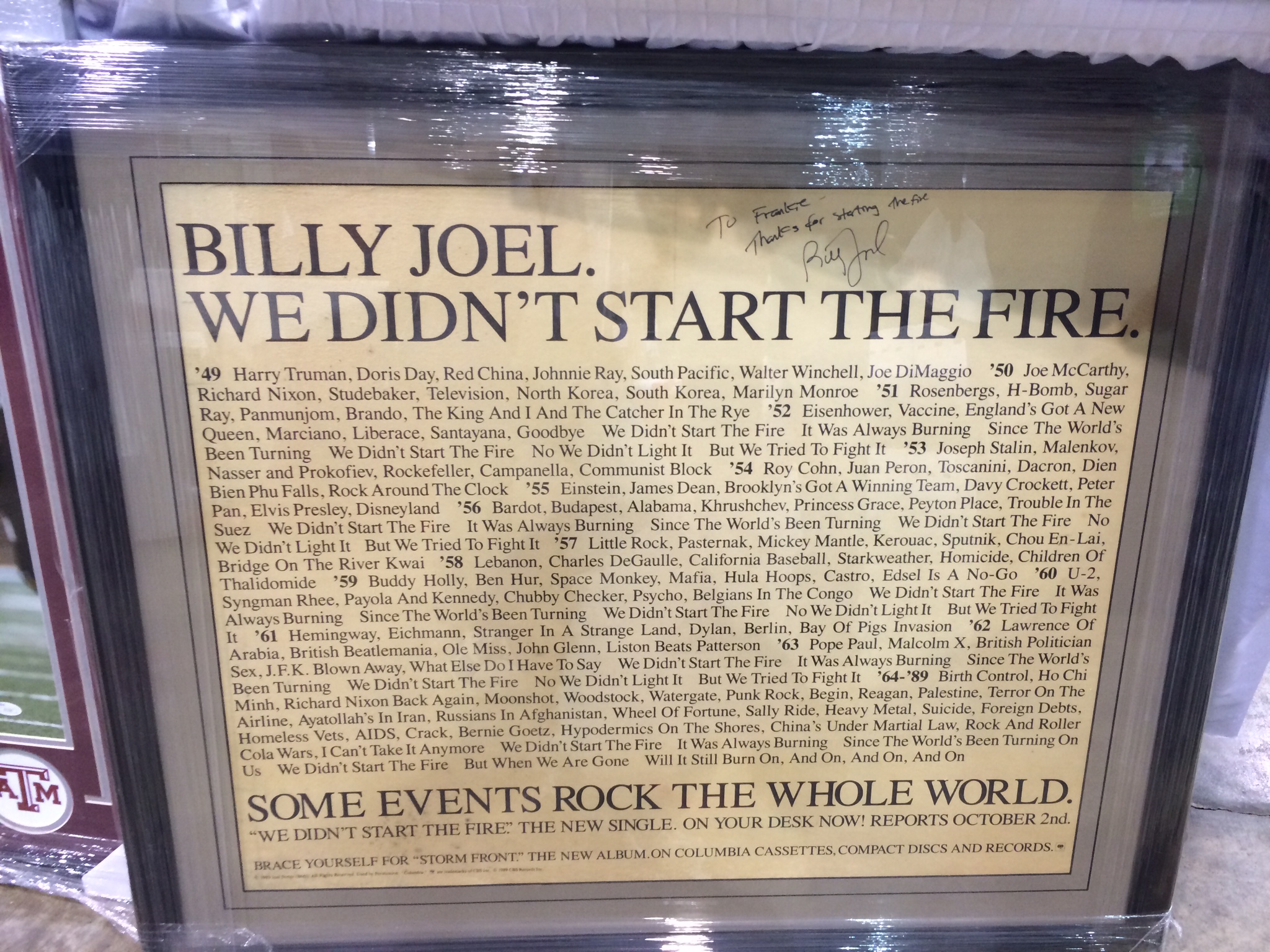 BS: I come to the convention to find one-of-a-kind pieces, pick them up, then stare at them for two to three minutes as the seller hovers excitedly … before ultimately walking away because I can’t figure out where the piece would go other than the back of my garage.

RB: Would have bought this if the font were Garamond. But it’s not. So I didn’t. 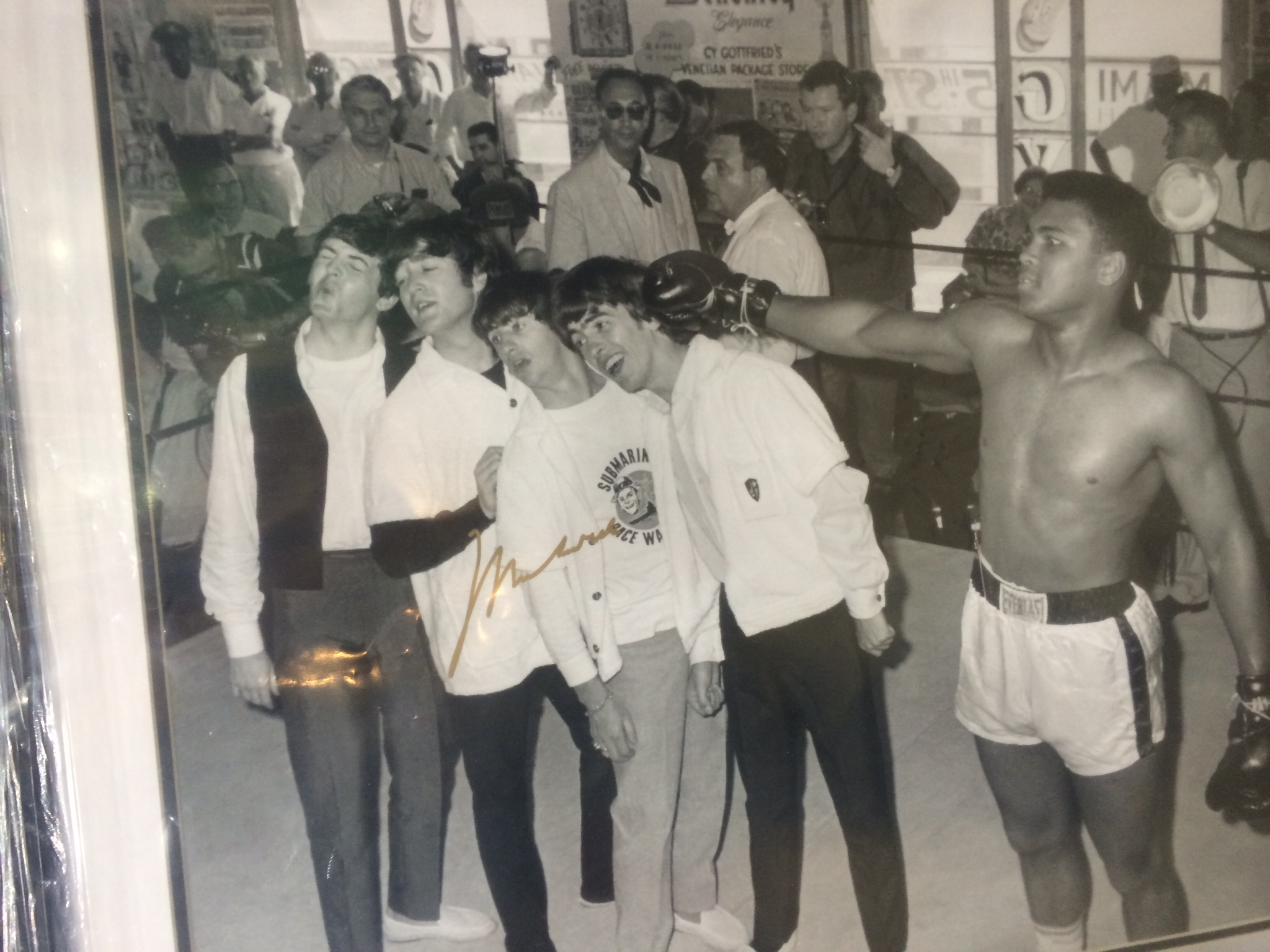 BS: Has there ever been a photo with more star power? Ali with the Beatles? Is this the greatest photo ever taken? (Hold this thought.) 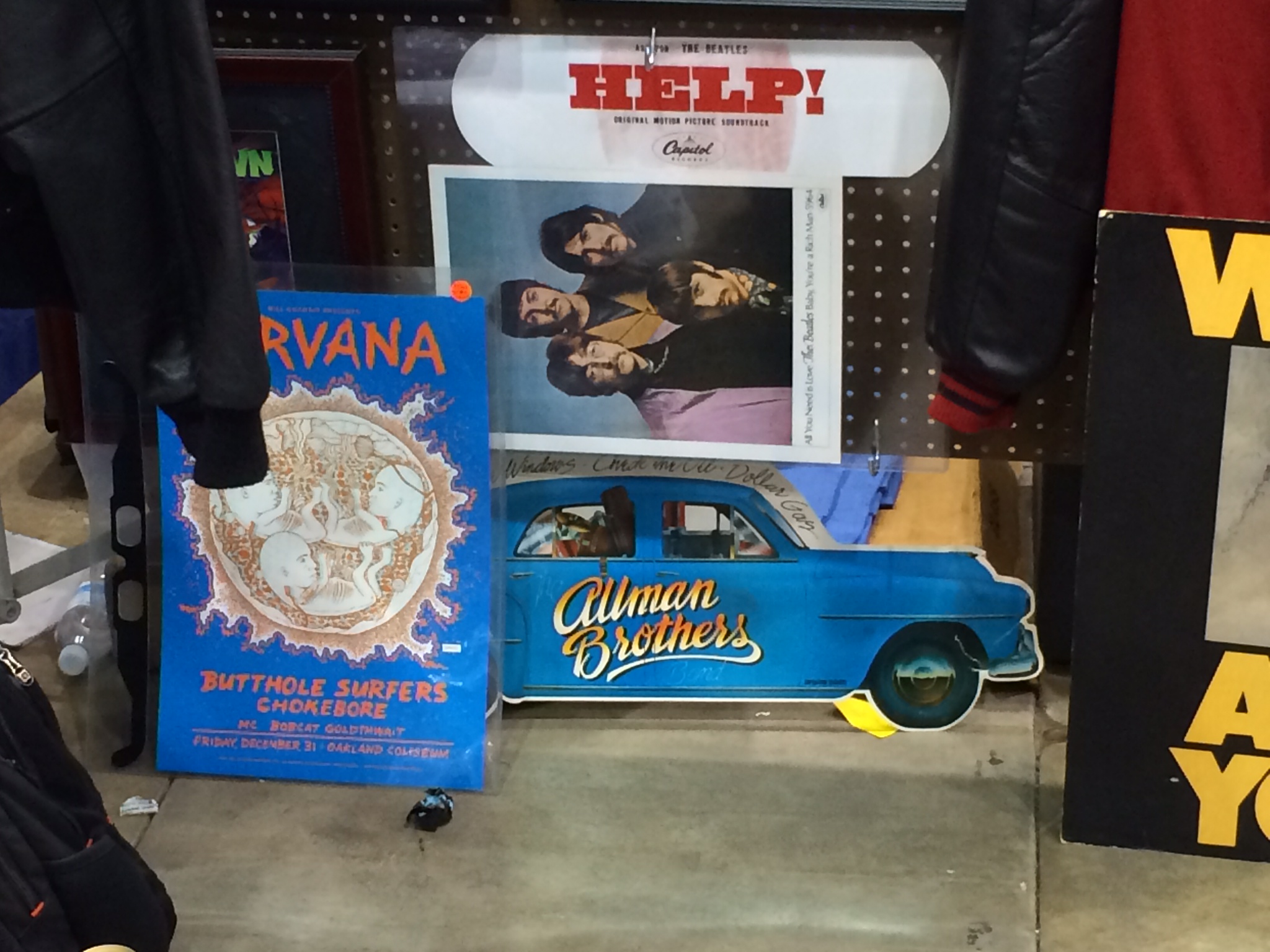 BS: If I liked the Allman Brothers 39 percent more, I would have snapped up that blue cardboard promo buggy of an album that wasn’t even one of their best albums. This was a great booth run by a music collector named Will Simmons who had loads of one-of-a-kind stuff. Who knew there were other white people with the last name “Simmons”?

RB: It’s your family, that guy, and Richard Simmons. No others. Don’t even bother looking. Can we do a Simmons power rankings? Unclear where you fall, but Sue is still no. 1.

BS: I have Sue third. It’s Russell Simmons, Gene Simmons, Sue Simmons, Ted Simmons, Al Simmons … and I think I’m holding off on Andrelton Simmons for the no. 6 spot until he learns to hit. 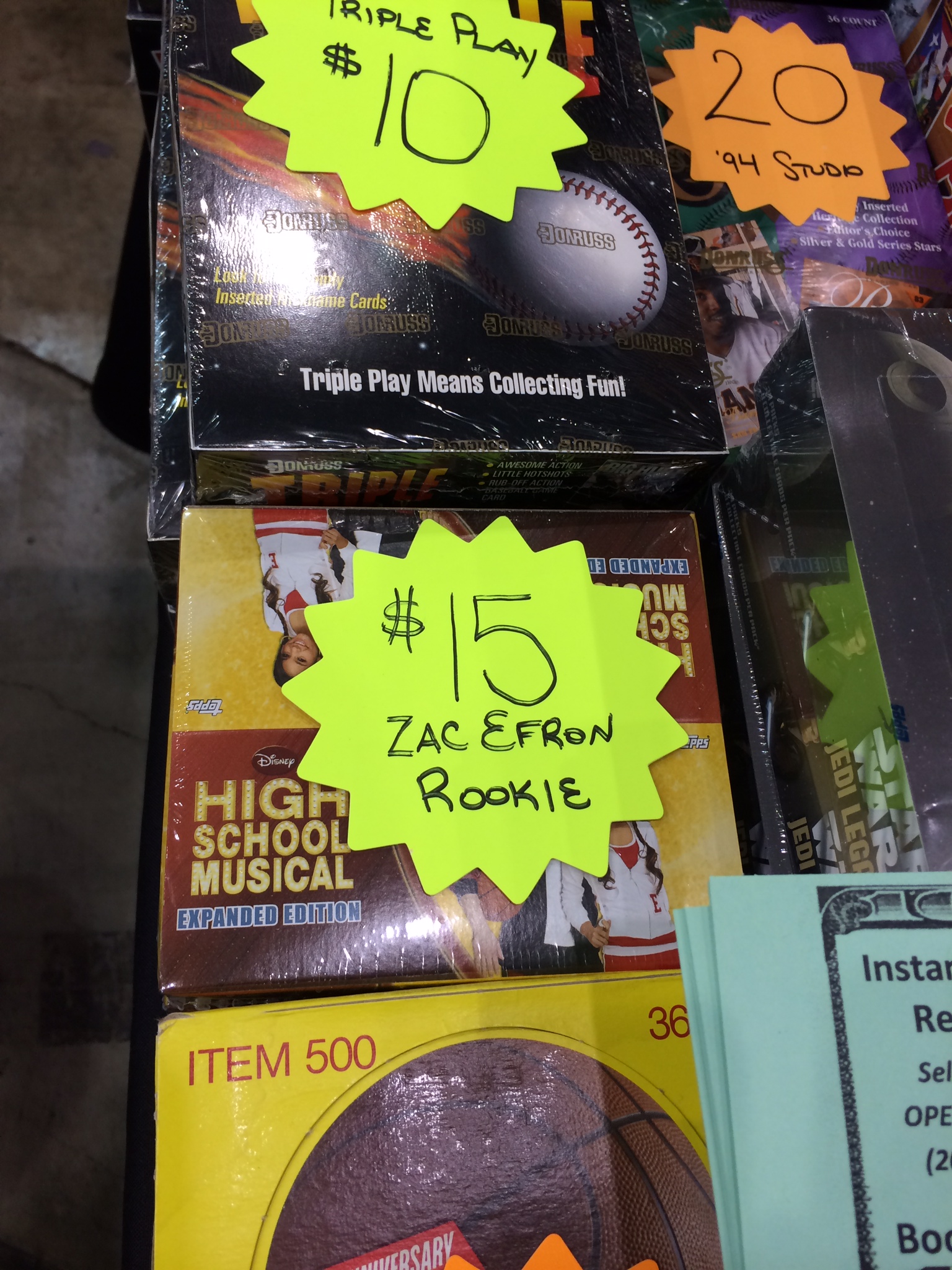 RB: No can do, but may I interest you in a Mint Mussolini? 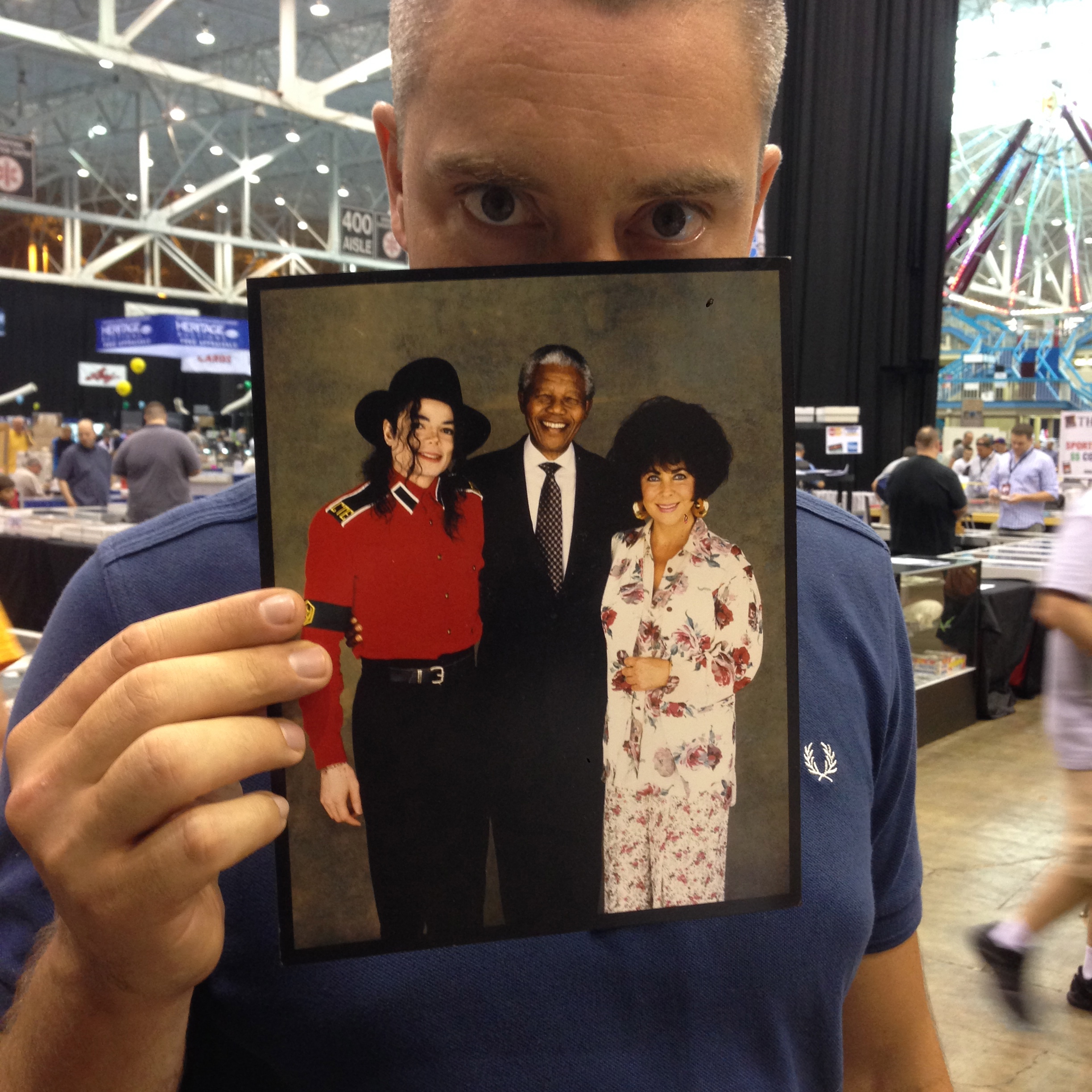 RB: I love David Jacoby with all my heart, but I had no idea he was even in this picture. But I’ll take your word for it. 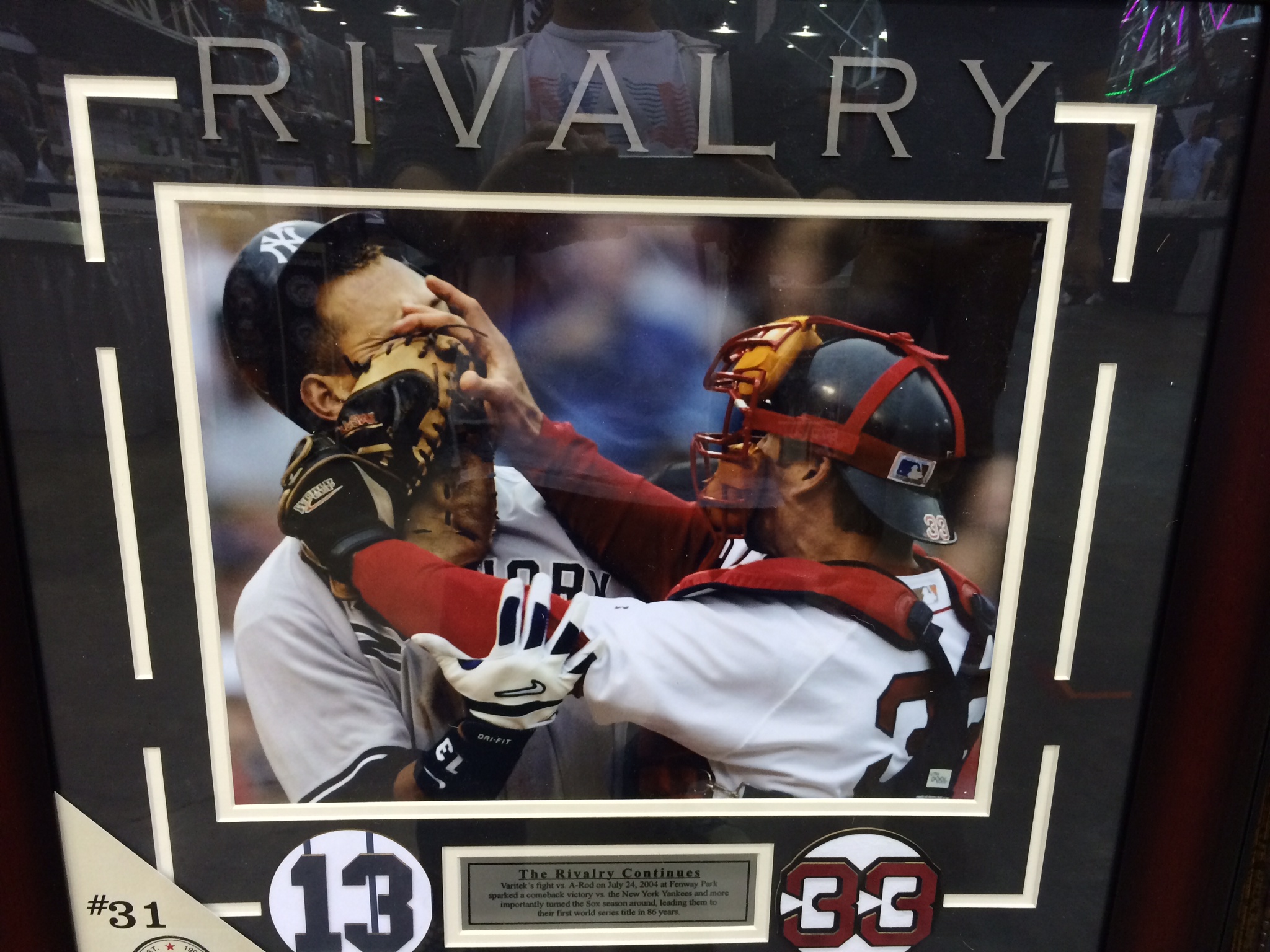 RB: The only way this is worse is if it’s an oil painting. 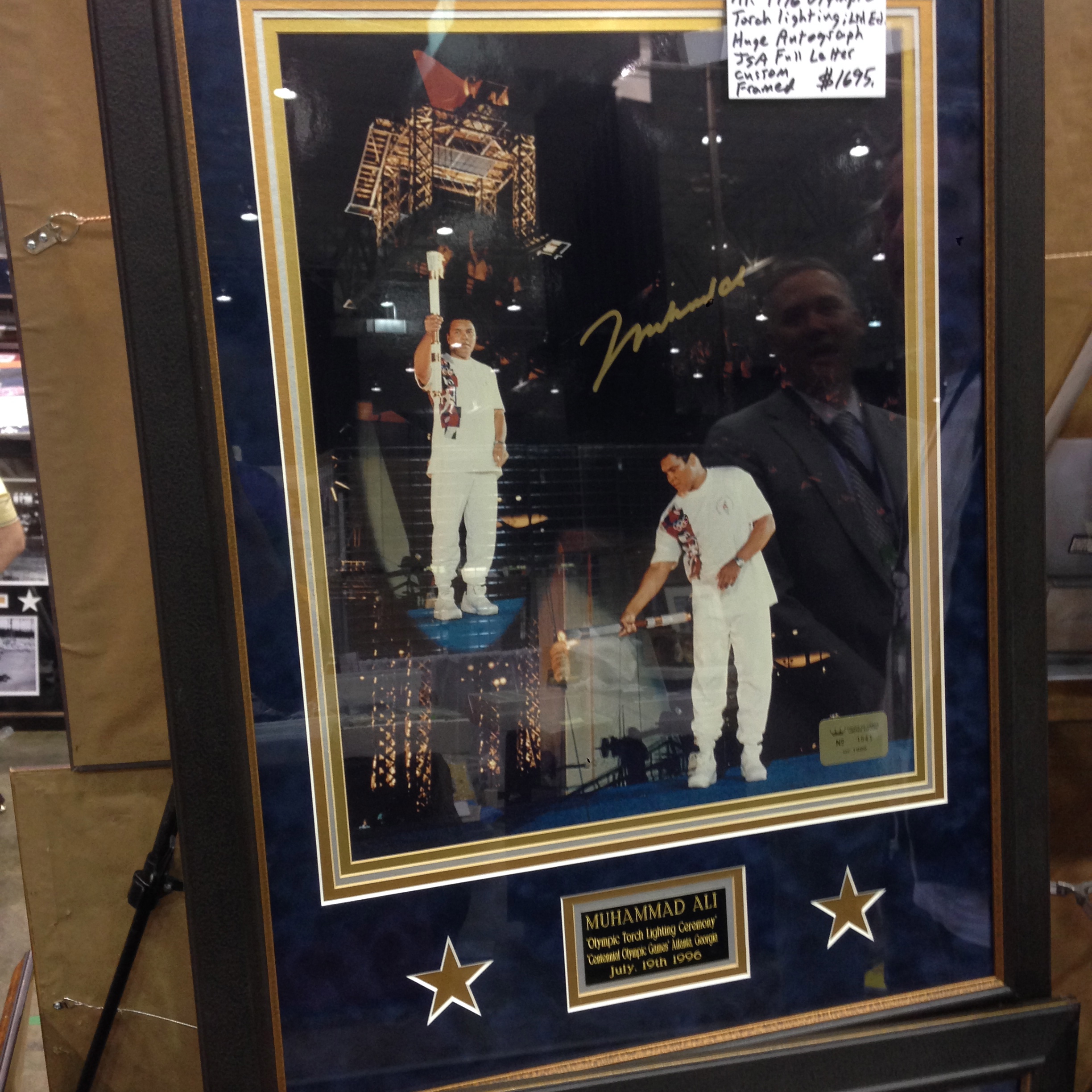 RB: I wish there were a way to buy this with the Joe House reflection included. Then, and only then, do you get my $1,695. 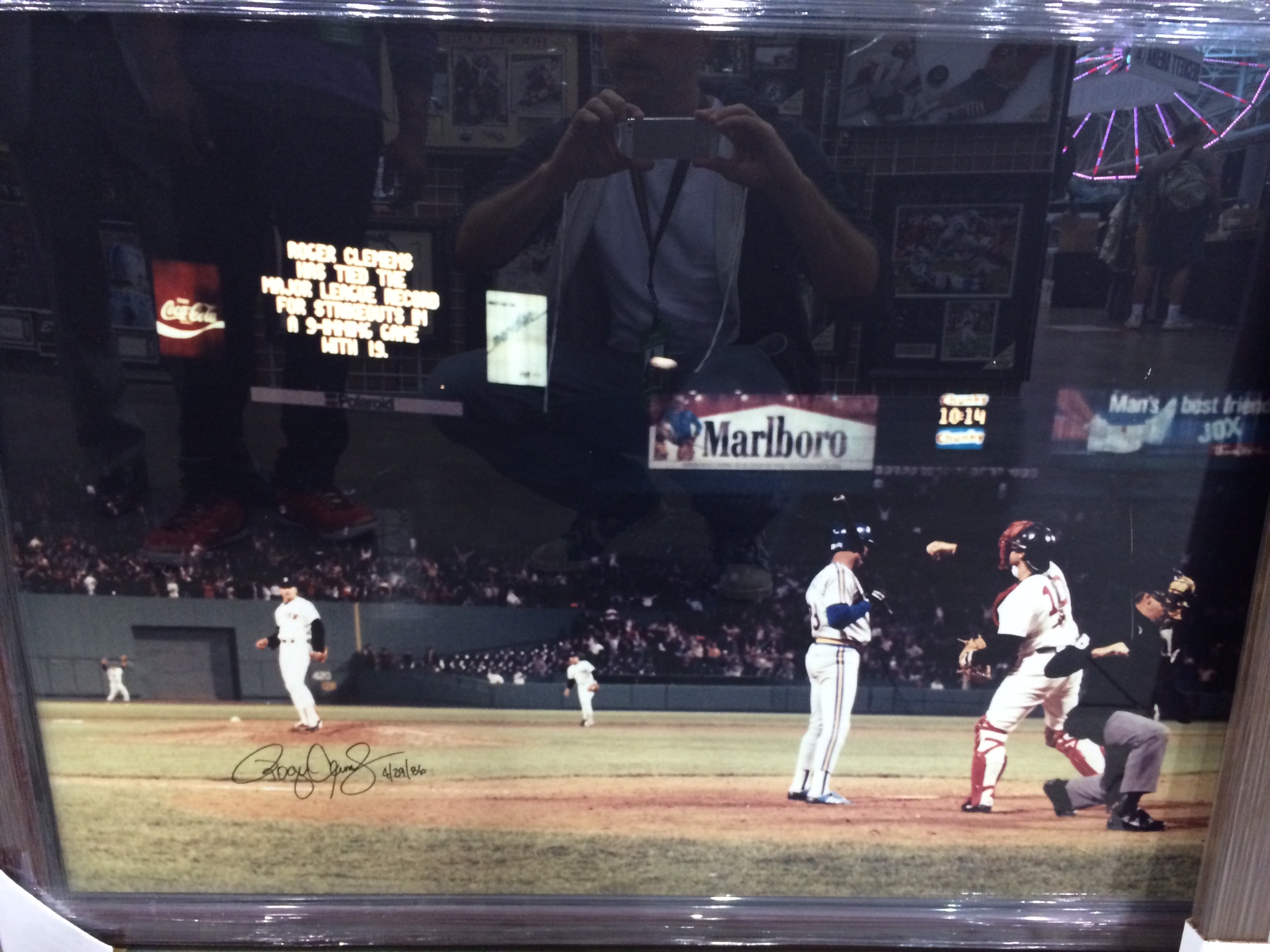 BS: From 1987 through 1996, I and many other Boston fans would have considered donating a kidney to own this giant Clemens 20K Game photo. And even if I’d consider buying it now only if you also gave me the option to legally break it over his head, the photo still gives me little tingles. I can’t lie. 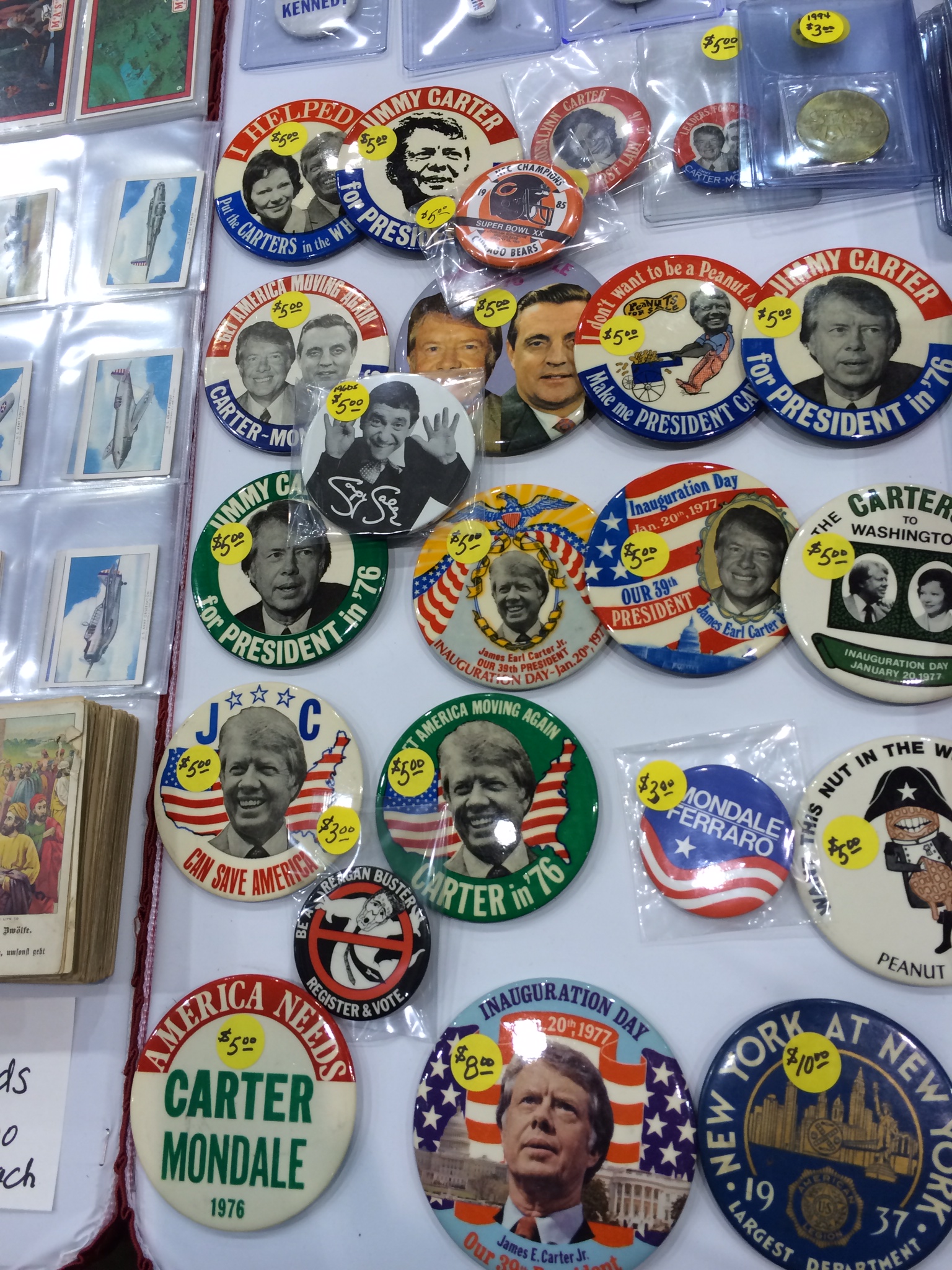 BS: The collectors convention … a place where you have conversations like, “Do you think Jimmy Carter was our most underrated president?” as some random seller eats chicken wings and halfheartedly listens in while hoping you’ll buy something.

RB: In case you’re wondering, yes, I did buy the Rosalynn-Jimmy “I Helped Put The Carters In The White House” pin (top left) and, yes, I do plan on PhotoShopping Beyoncé and Jay Z over their faces. 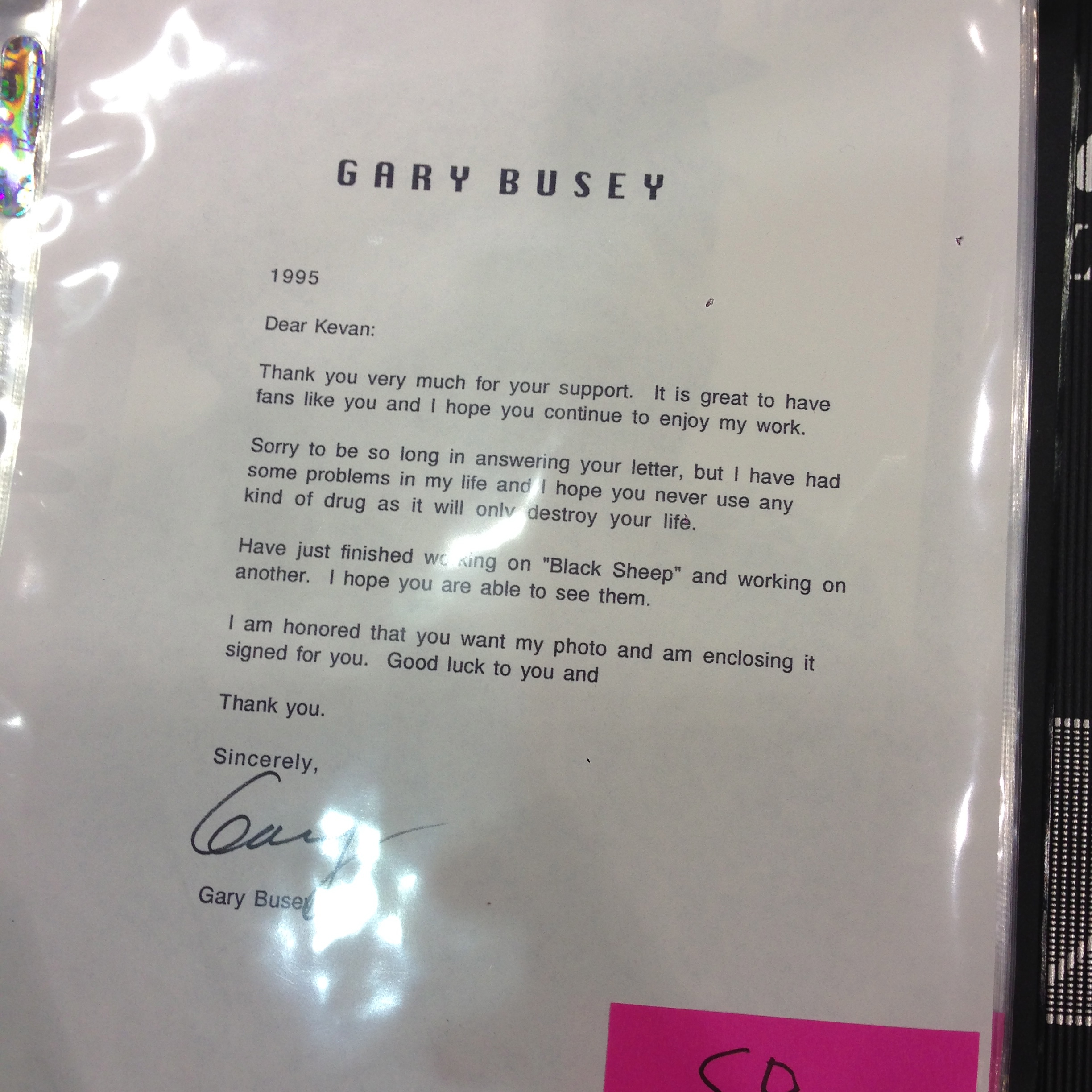 BS: This doesn’t seem like a form letter at all.

RB: There’s nothing better than ending a letter with “Good luck to you and.” Nothing. 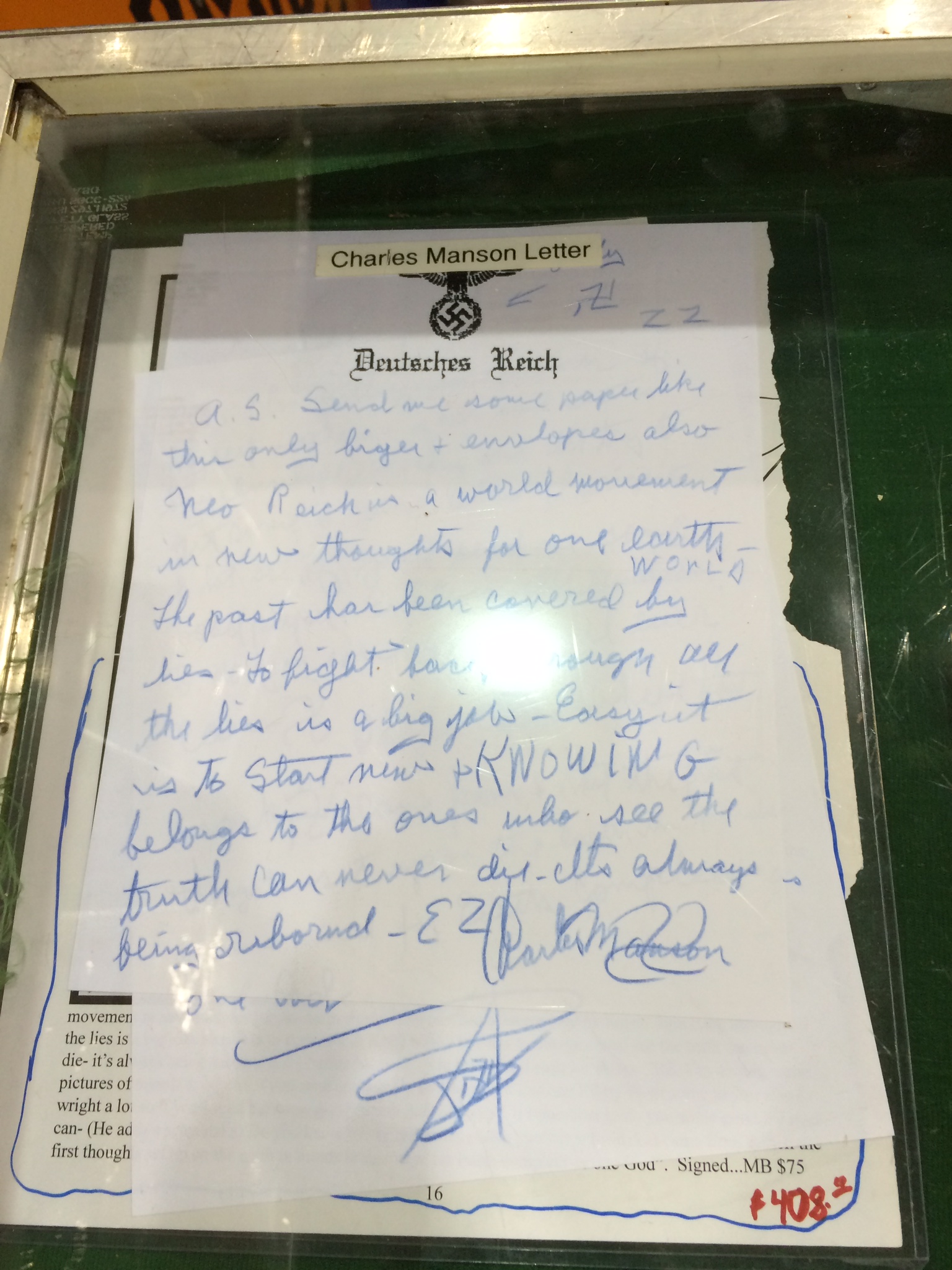 BS: If you already splurged on an authentic Charles Manson letter that didn’t have a swastika and a “Deutsches Reich” label, seeing this had to hurt.

RB: I’ve got to say, not psyched at the sheer amount of Nazi memorabilia in this convention. I respect one-upmanship in pretty much every arena, except Nazi memorabilia. 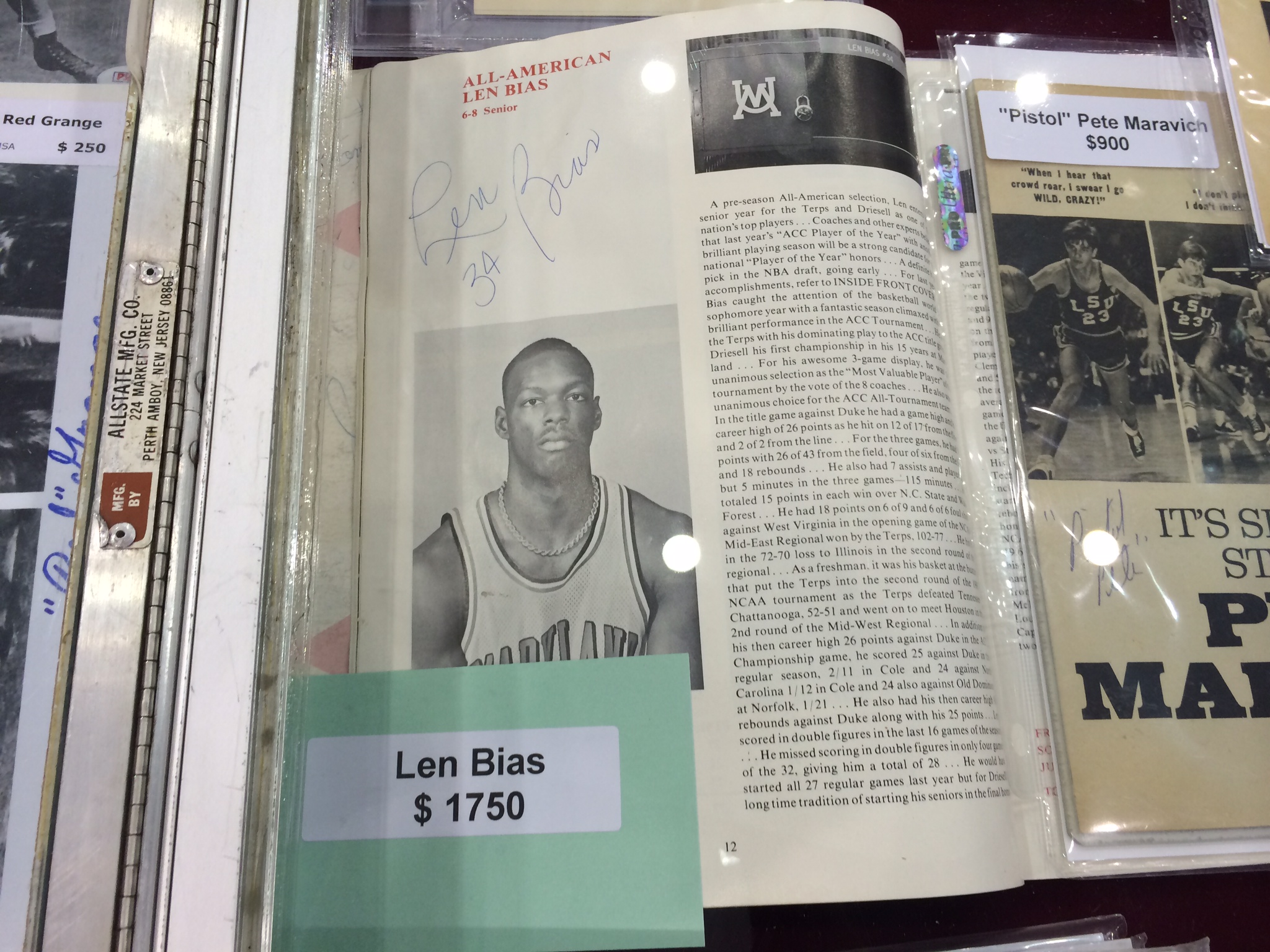 BS: It’s hard to find Lenny Bias’s autograph (as you can tell by the price). It’s also hard to recover from running back-to-back photos of Manson’s Nazi letter and Lenny Bias. I’m depressed. What’s next? Cheer me up, next photo! 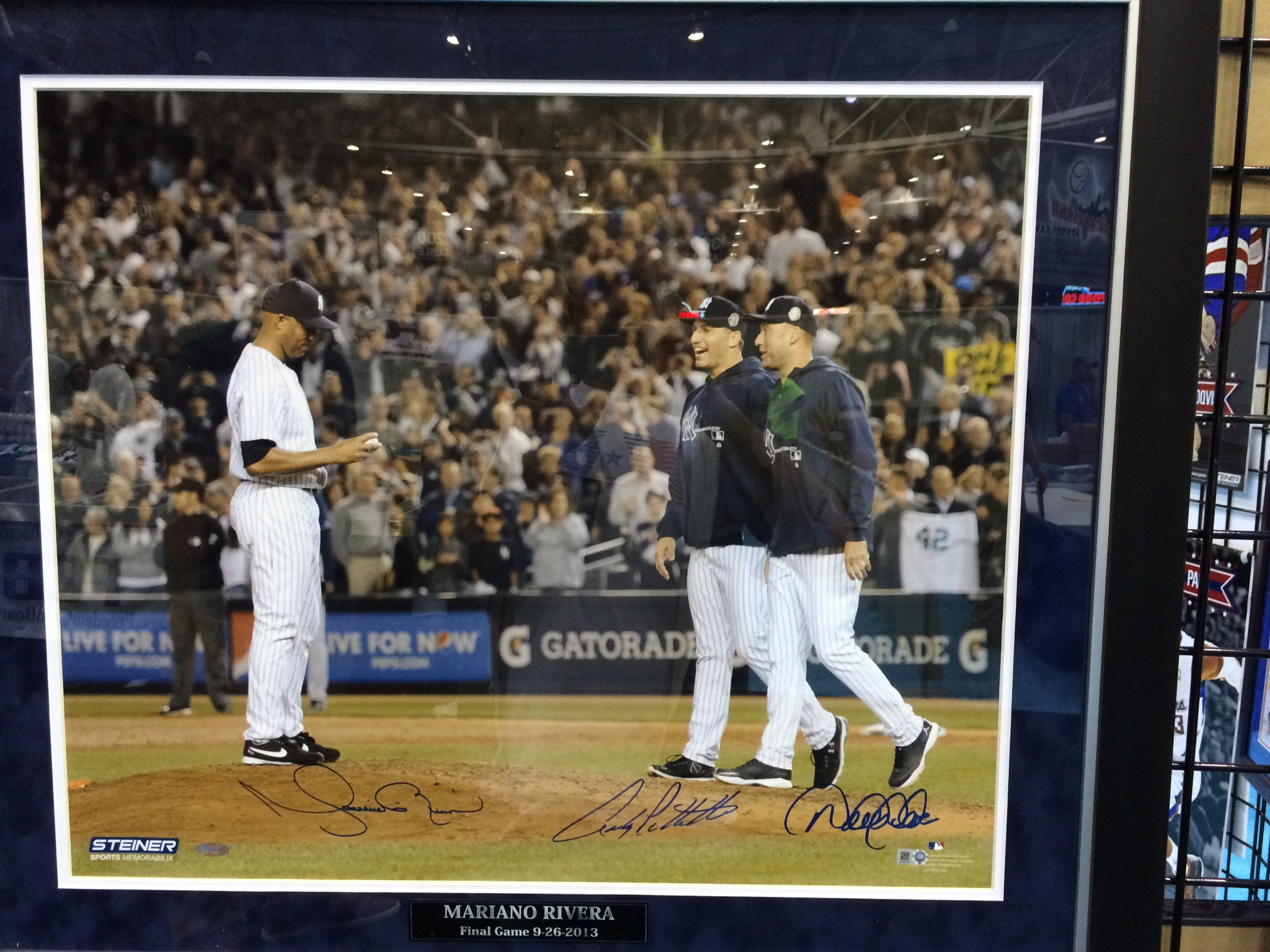 RB: Did you get this for the studio? I hope you did — it would look really nice. Such history, all in one photo. What a moment.

BS: You’re half-right — I almost bought it for the studio, but I was going to superimpose the photo of A-Rod kissing himself in the middle. I still might. 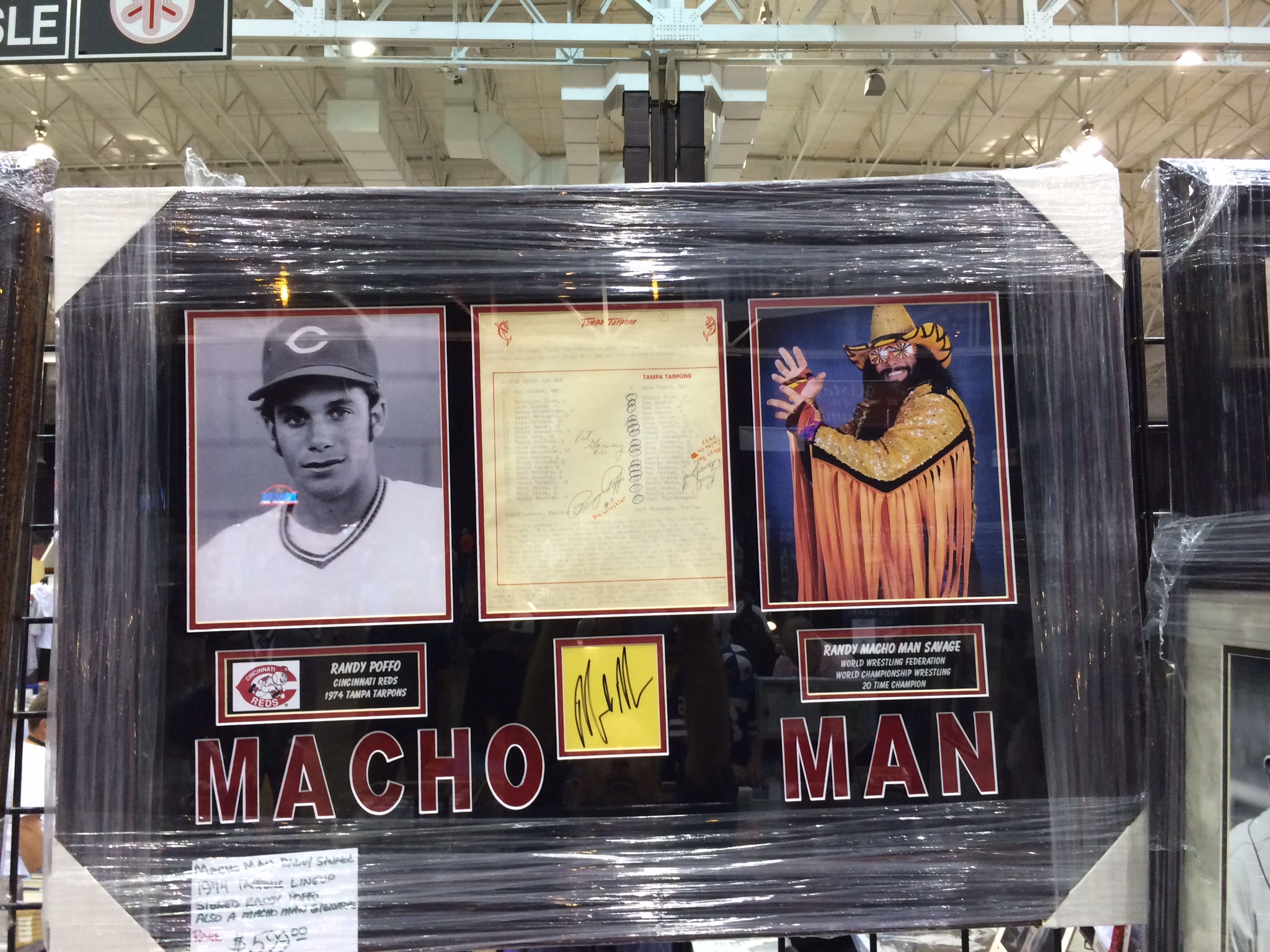 RB: I want to publicly apologize to David “The Masked Man” Shoemaker for not purchasing this and bringing it back to New York City. I have failed you, friend. 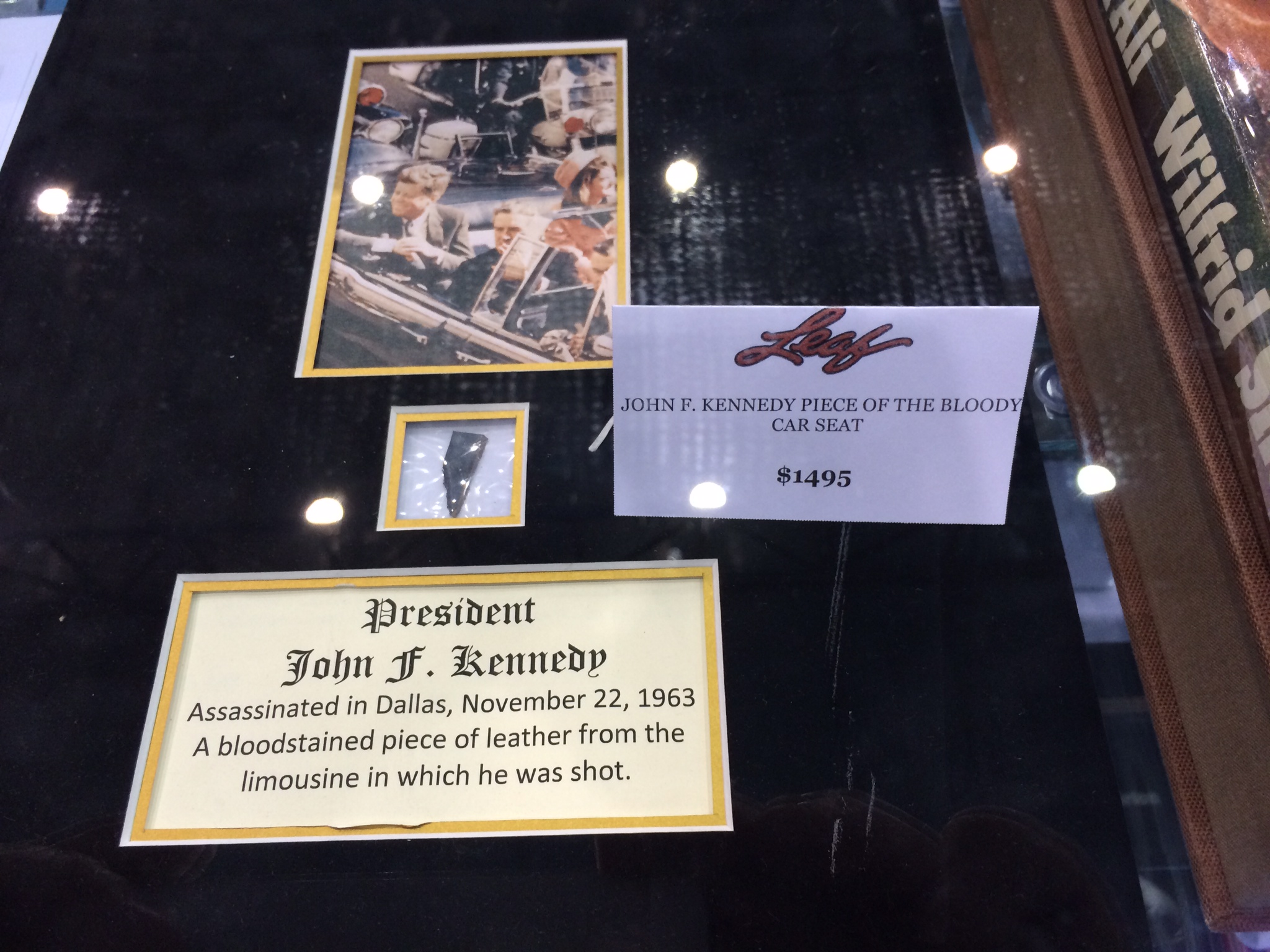 BS: You knew they sold game-worn memorabilia, but you never knew they sold assassination-worn memorabilia, right? Instead of the JFK photo they picked, why not show the Zapruder still of JFK’s head exploding from the bullet? Why hold back? Why not make this the most tasteless convention item ever? Oh wait, it already is? Then why not make it the most tasteless convention item forever? I think they could have gone further. I need to take a shower.

RB: I hope no one ever buys this. With that said, I’m sure someone purchased this 10 minutes after we walked away. Because everything’s terrible. 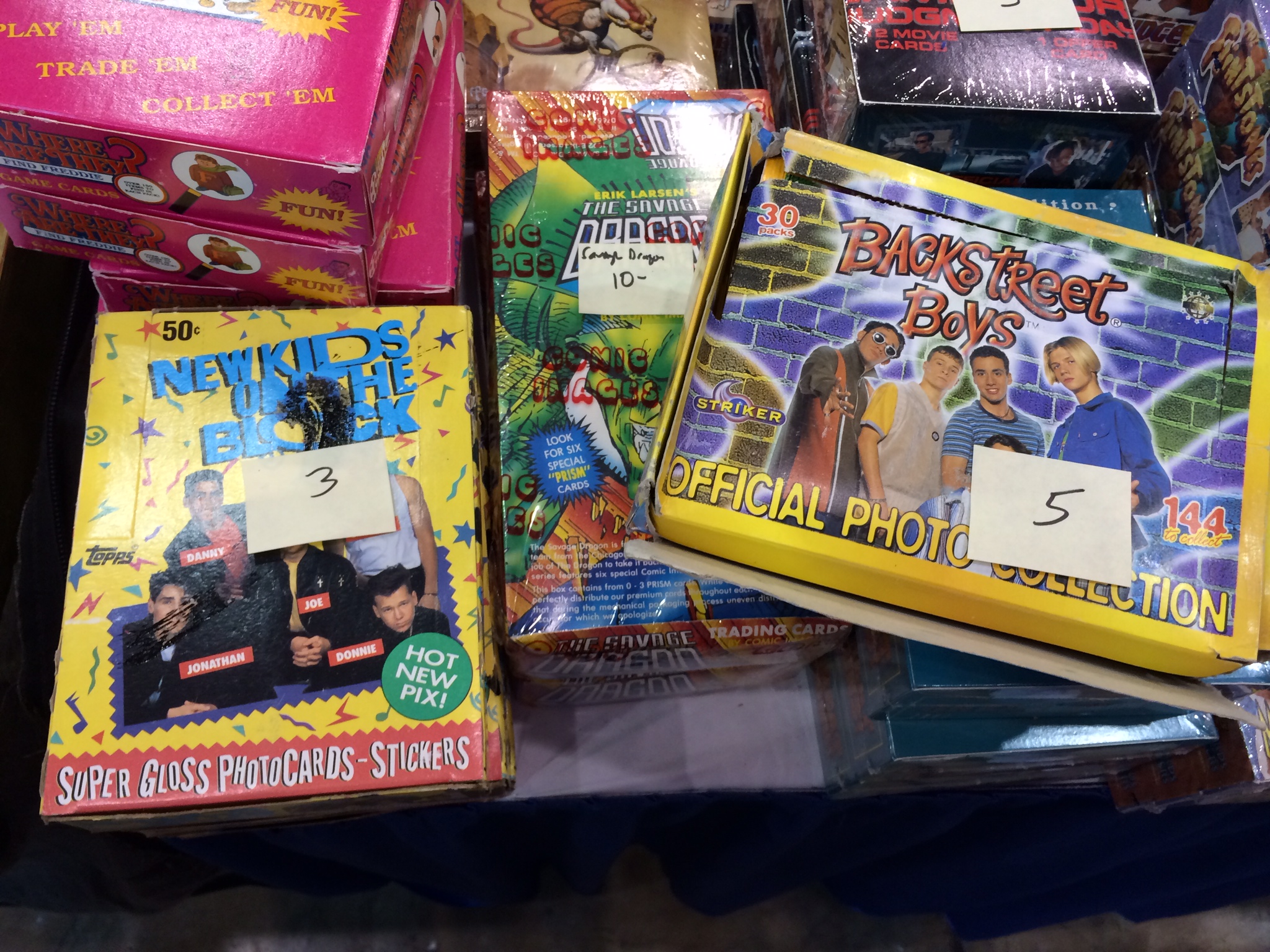 RB: VICTORY. ALL IS RIGHT IN THE WORLD. 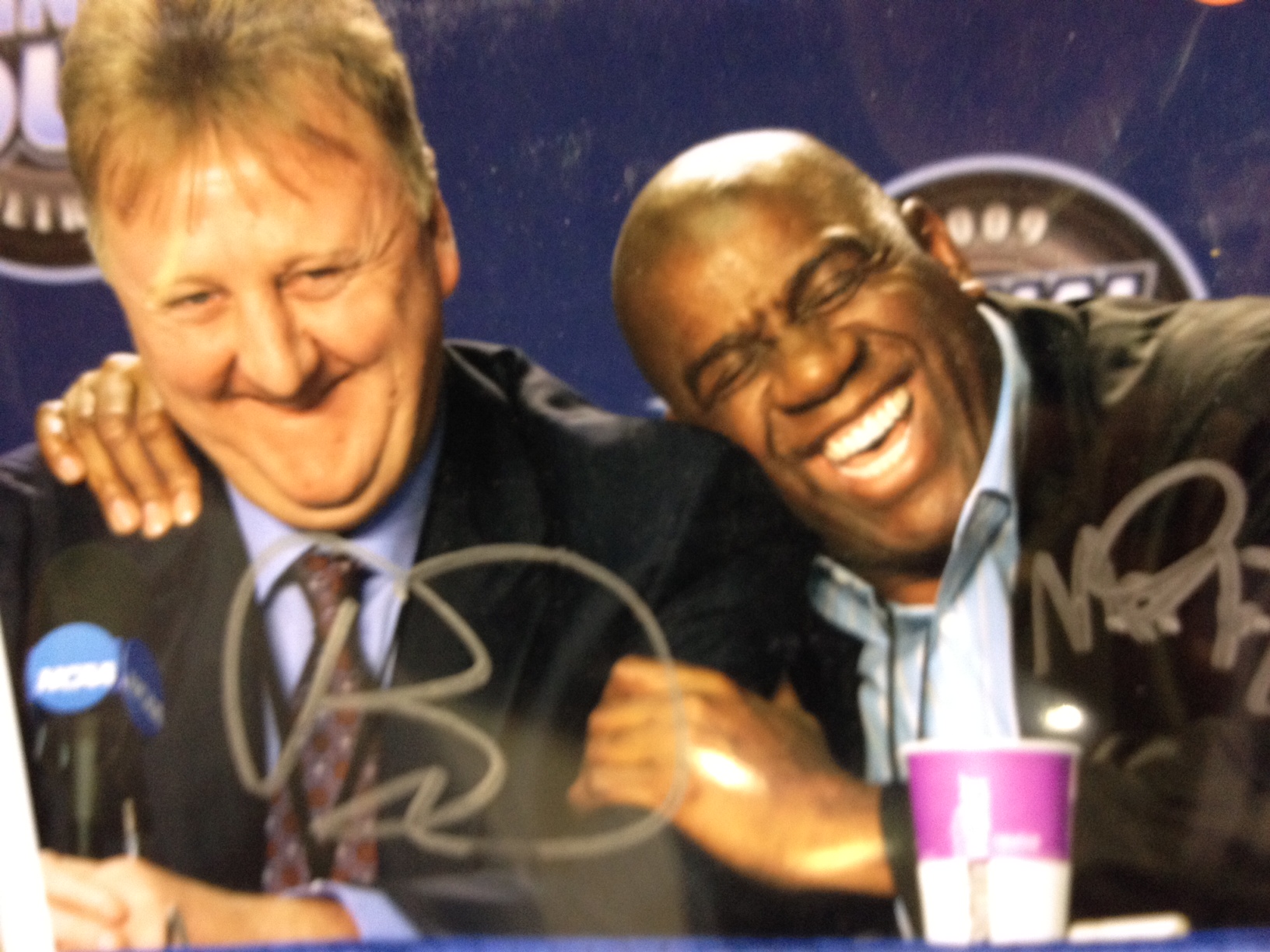 BS: I thought about buying this, then immediately setting it on fire in front of the person selling it. You’re gonna sell THAT photo of the Legend???? He’s the Basketball Jesus!

RB: Just for clarification, is it “Fat Bird” and “Magic” or “Fat (Bird and Magic)” as in Magic is fat, alongside Fat Bird? Either way, I love this photo. 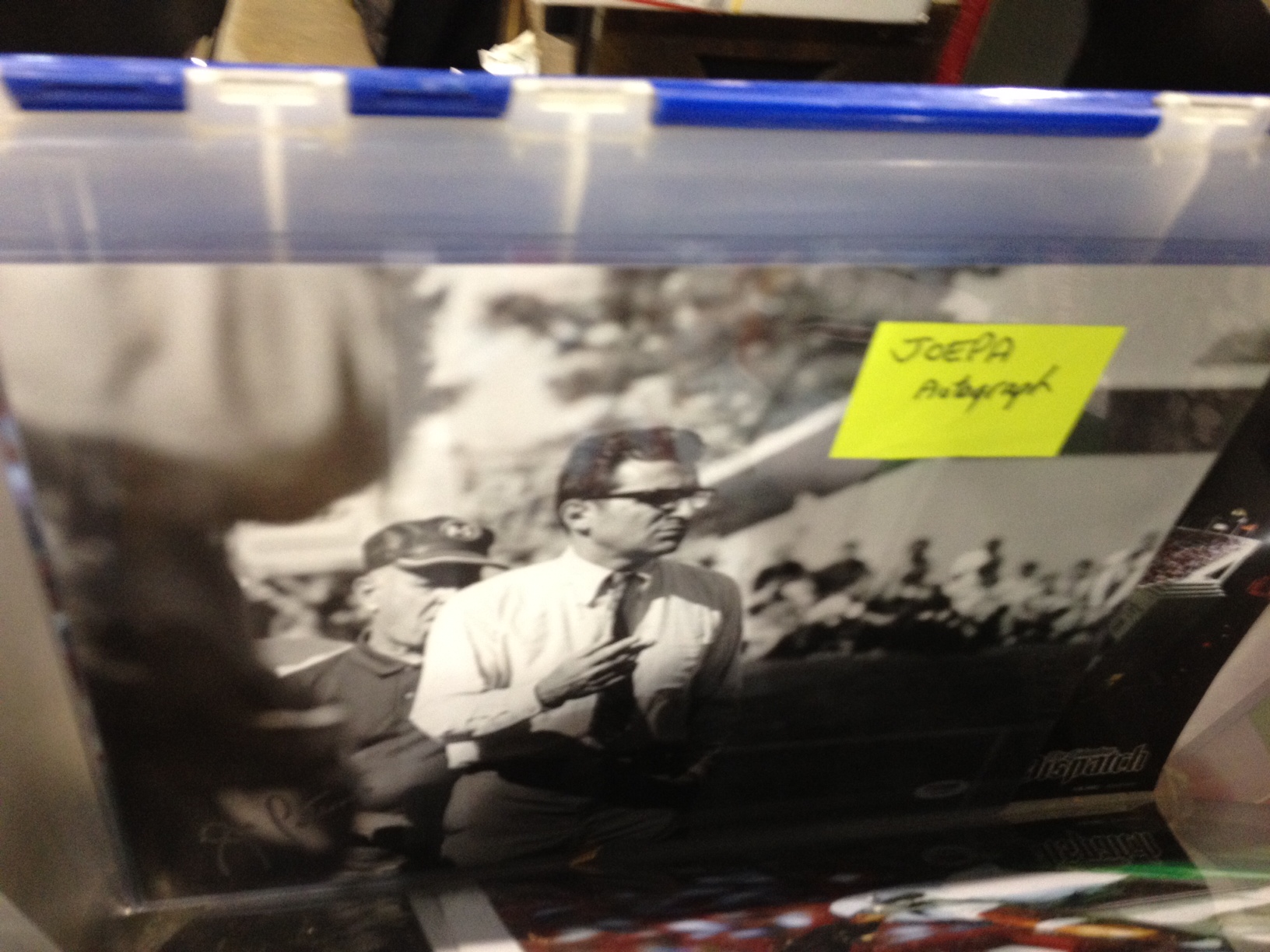 BS: The JoePa market is a little slow right now.

RB: There’s no price, so I’m assuming these were just giveaways. 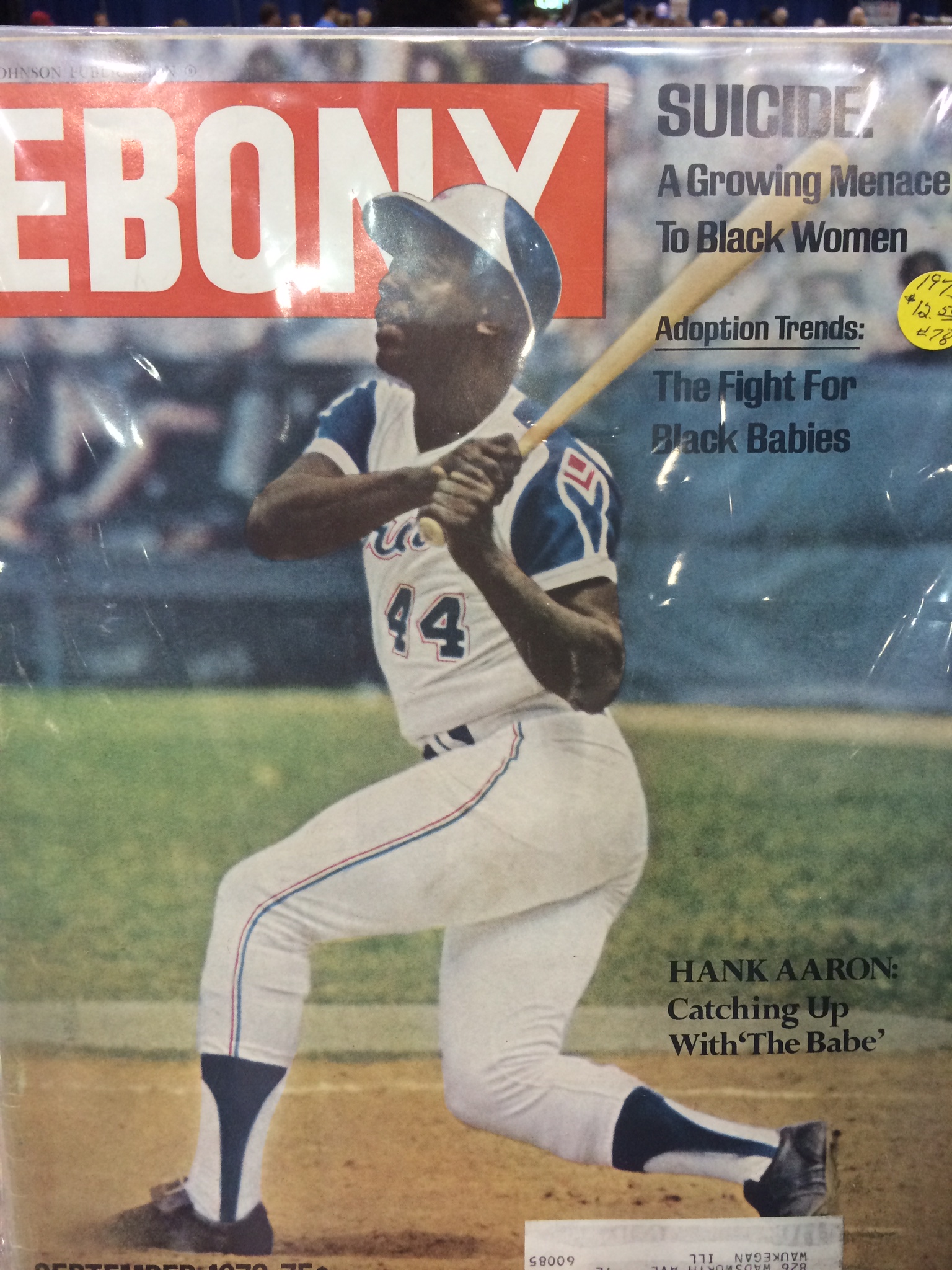 BS: We picked this up because the non-Hank headlines were “SUICIDE: A GROWING MENACE TO BLACK WOMEN” and “ADOPTION TRENDS: THE FIGHT FOR BLACK BABIES,” thinking this had a chance to be the most depressing magazine ever published … 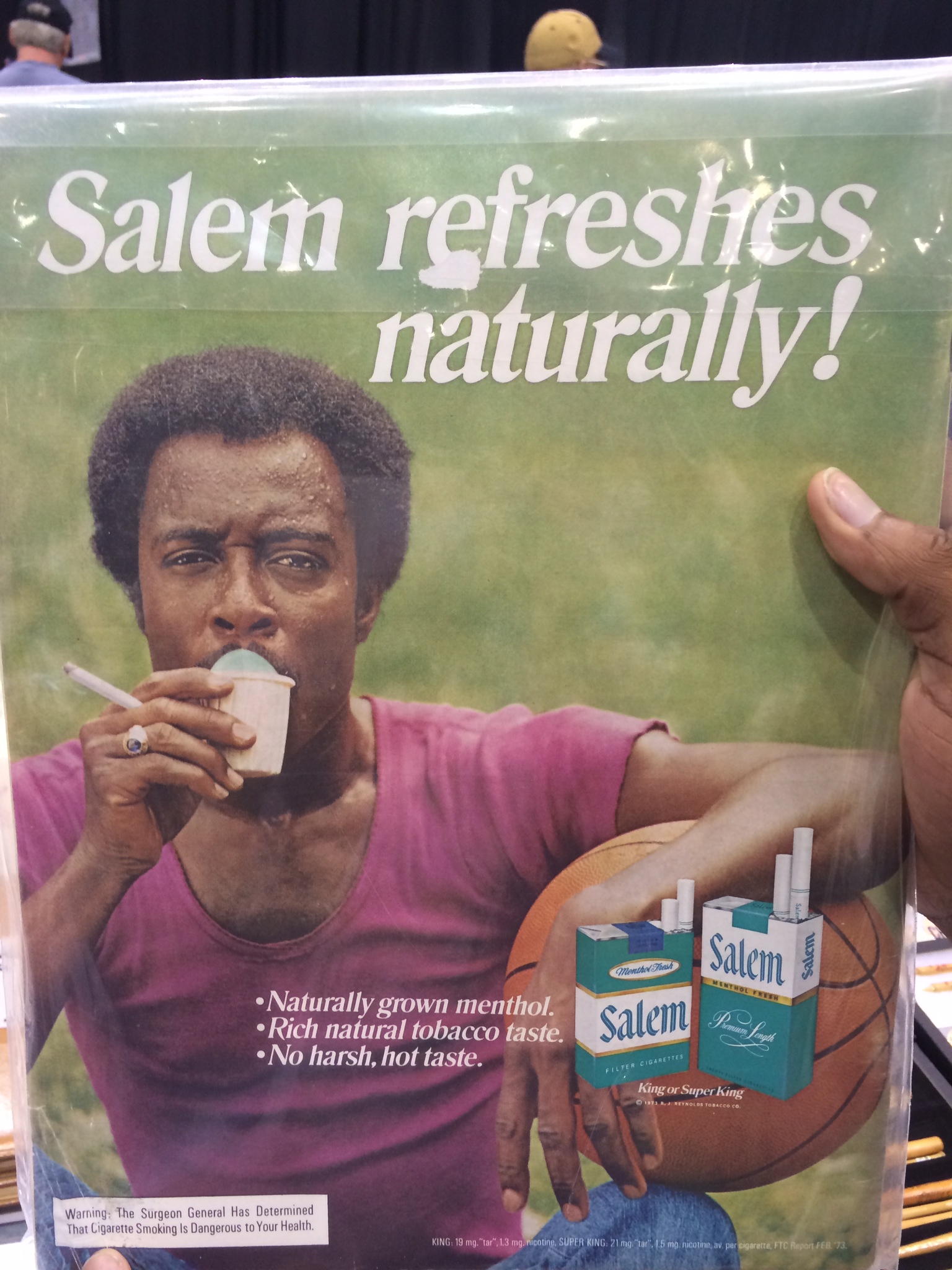 BS: But then we looked at the back and saw a guy smoking a cigarette while eating an Italian ice. Don’t get down, black people of 1974! We have tons of cigarettes and Italian ice!

RB: I think it’s more, “Hey, it’s 1974 and America still sucks for us. So go have a cigarette. And eat some lime Italian ice. And then go play basketball. You’ve earned it.”