A Visit to the 2014 National Sports Collectors Convention, Part 3

ITEMS THAT WERE DEFINITELY HERE THREE YEARS AGO 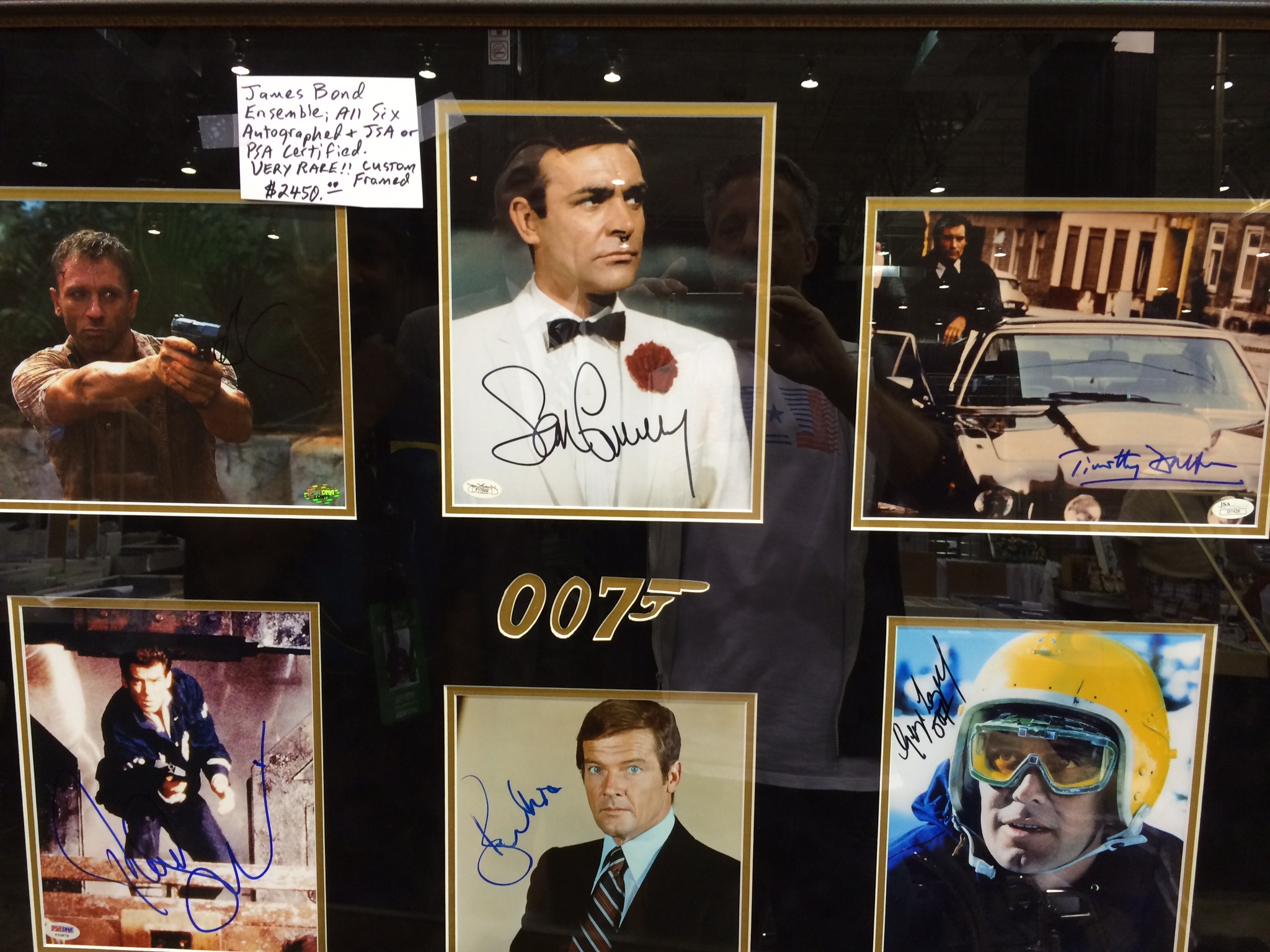 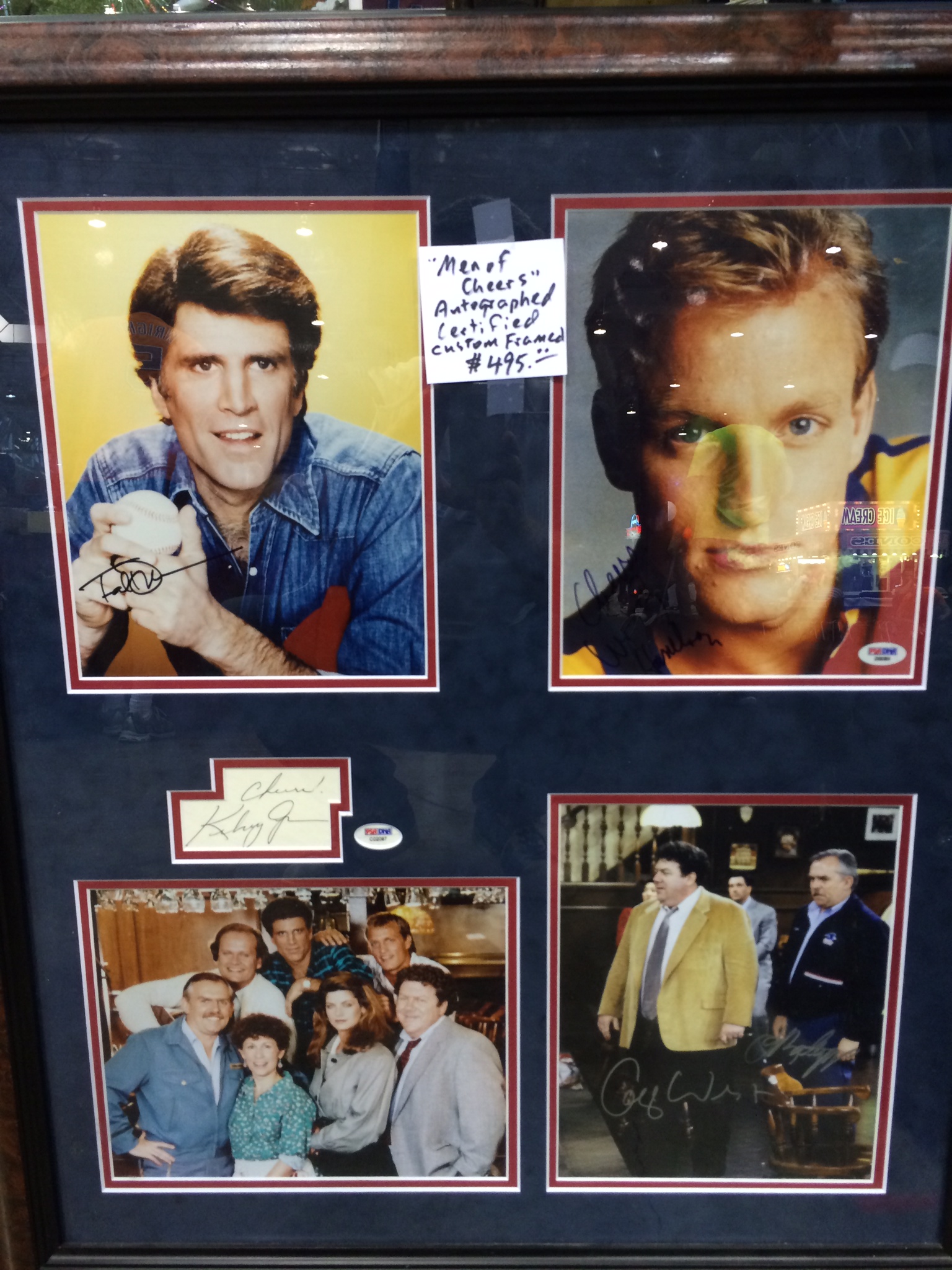 BS: I’m against man-made memorabilia in all forms … unless it’s an autographed Cheers collage in which Woody and Danson both look like they’re about to roofie your drink. Then I’m totally into it. Five hundred bucks? Would you take four? What about $425?

RB: Thought about sawing this in half, throwing $300 on the ground, and running away with the top half. 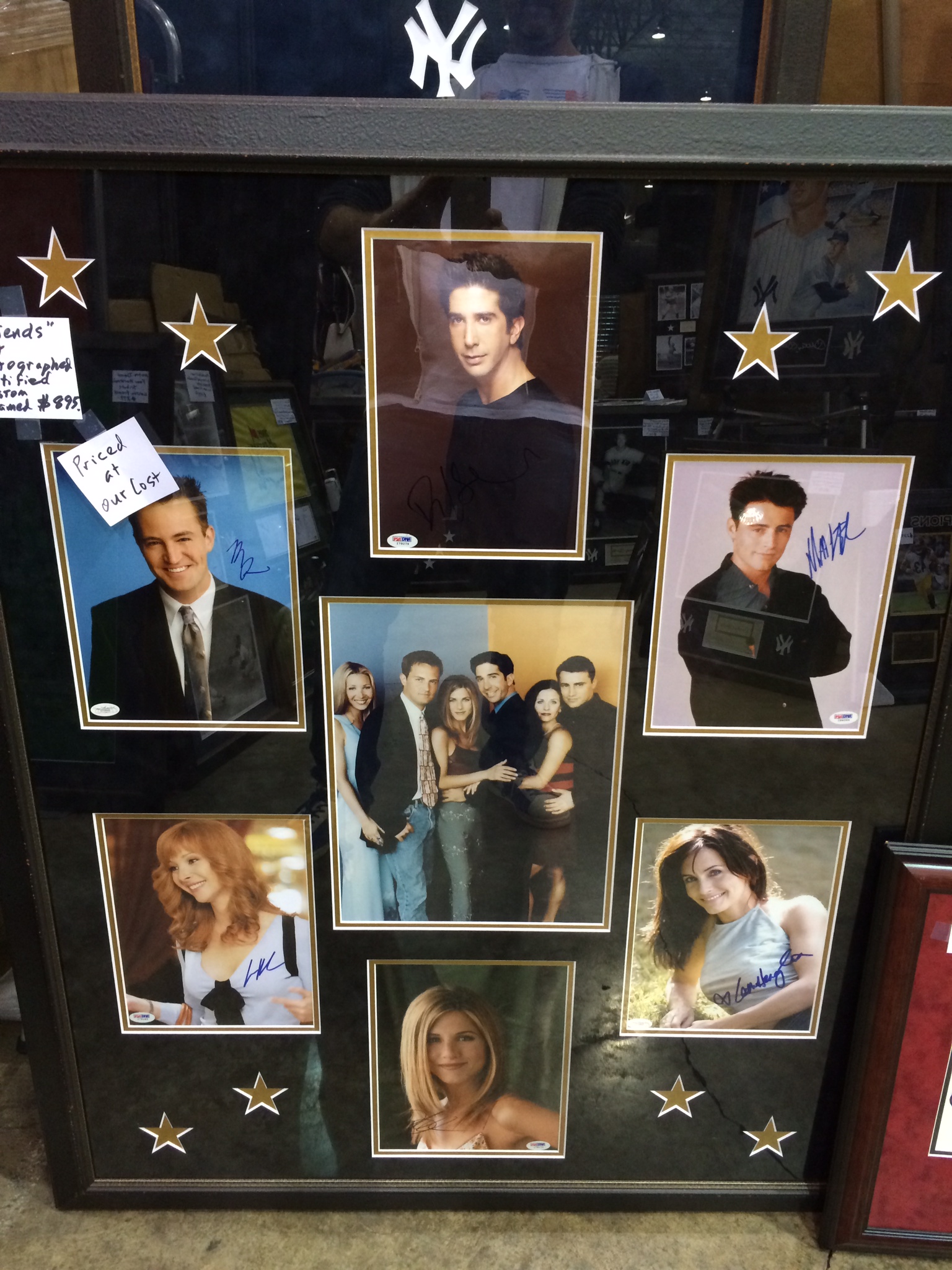 RB: Advice to the human still trying to sell the Friends collage: Trash these six photos and come back next year with Janice, Gunther, Marcel, Ugly Naked Guy, and Ursula. 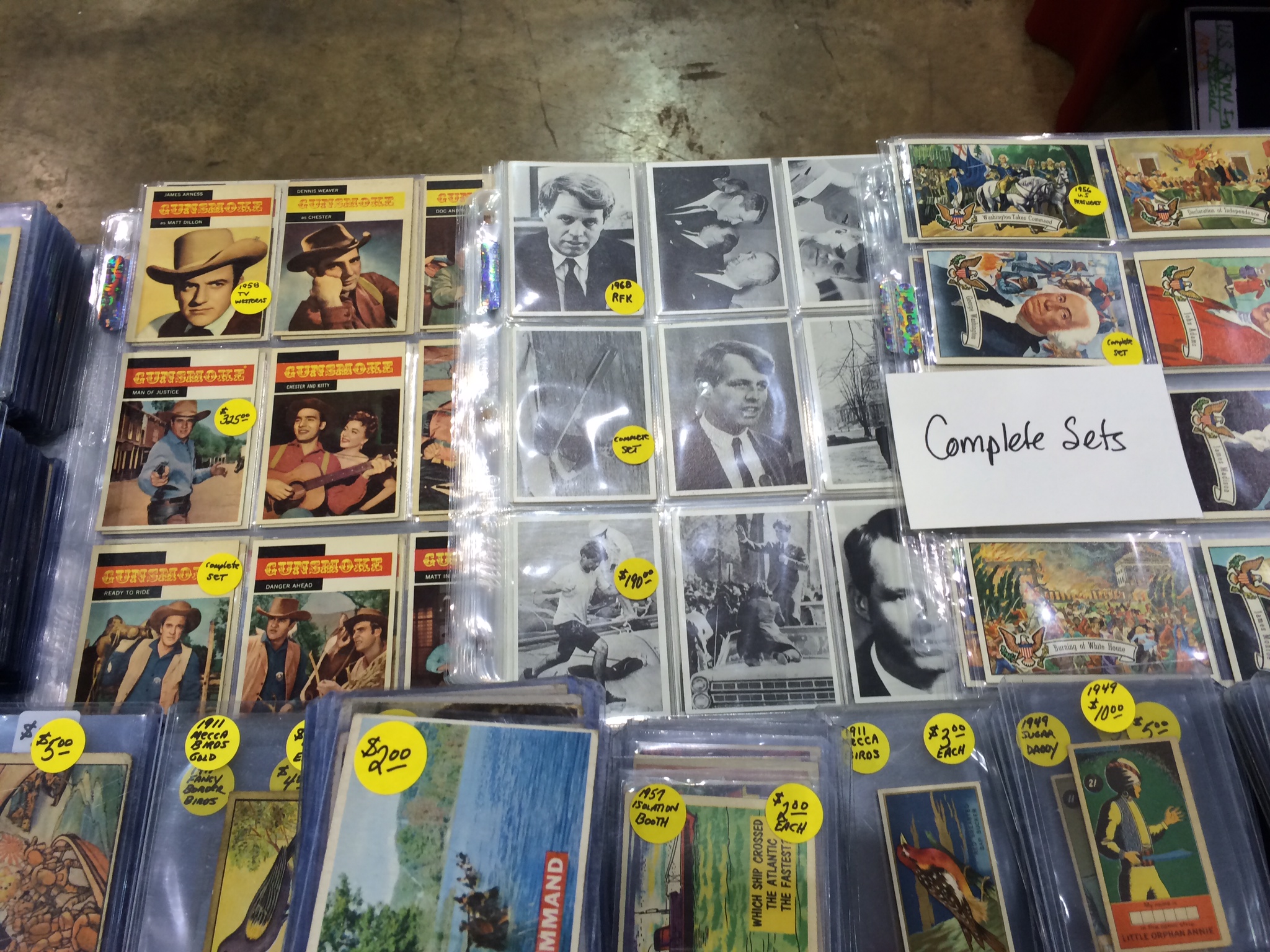 RB: I like this, but only if there are complete sets for all Kennedys. And then you can trade Kennedys for Kennedys. As in, it’s public knowledge that two sheets of RFK equal one mint-condition Eunice. That’s a world I want to live in.

BS: We already get to live in a world with a Klosterman card. You want to push your luck? 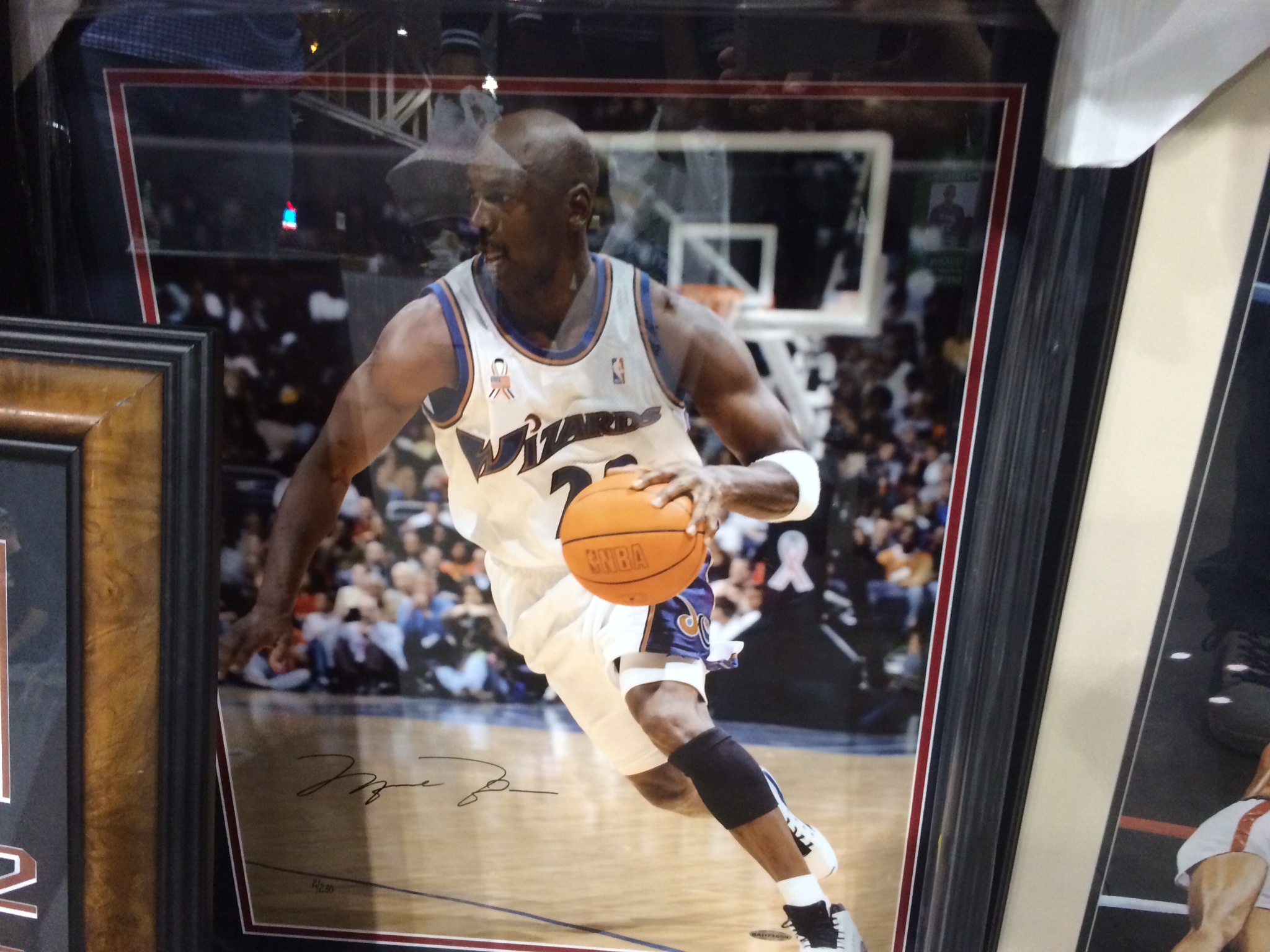 BS: Nobody owns the “Memorabilia That Should Have Never Happened” corner at the convention. The same guy selling this picture should also be hawking Shaq’s Cleveland jersey, all of Junior Griffey’s Reds stuff and MJ’s Wizards stuff, Randy Moss’s Niners helmet, framed photos from the new Martin Lawrence–Kelsey Grammer show, original drawings of the Sports Guy cartoon and all the outtakes from Rem’s failed 2015 ESPN pilot,* Live From an Indoor Ferris Wheel in Cleveland.”

ITEMS FROM THREE YEARS AGO THAT SADLY WEREN’T IN CLEVELAND 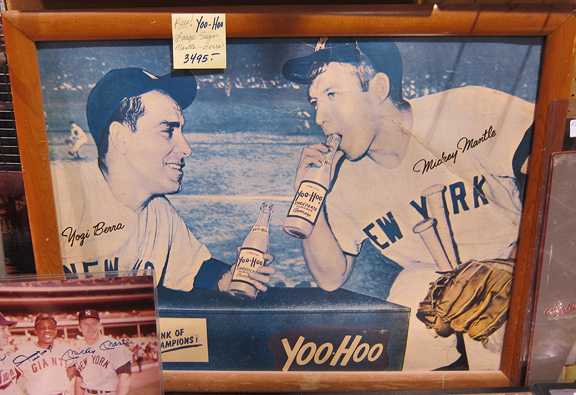 BS: My favorite item from every collectors convention … and it’s gone! MIA! Disappeared! What happened? Where is it? Why didn’t I buy it when I had the chance? Did Mickey Mantle make any other ads in which he inadvertently deep-throated a Yoo-Hoo bottle as Yogi Berra stared him down in the creepiest way possible? Can you point me in the right direction?

RB: I’m pretty sure Mantle found this empty Yoo-Hoo bottle and was using it to spit tobacco. As it says on the bottom left of the picture, “Yoo-Hoo: The Dip Receptacle of Champions.” 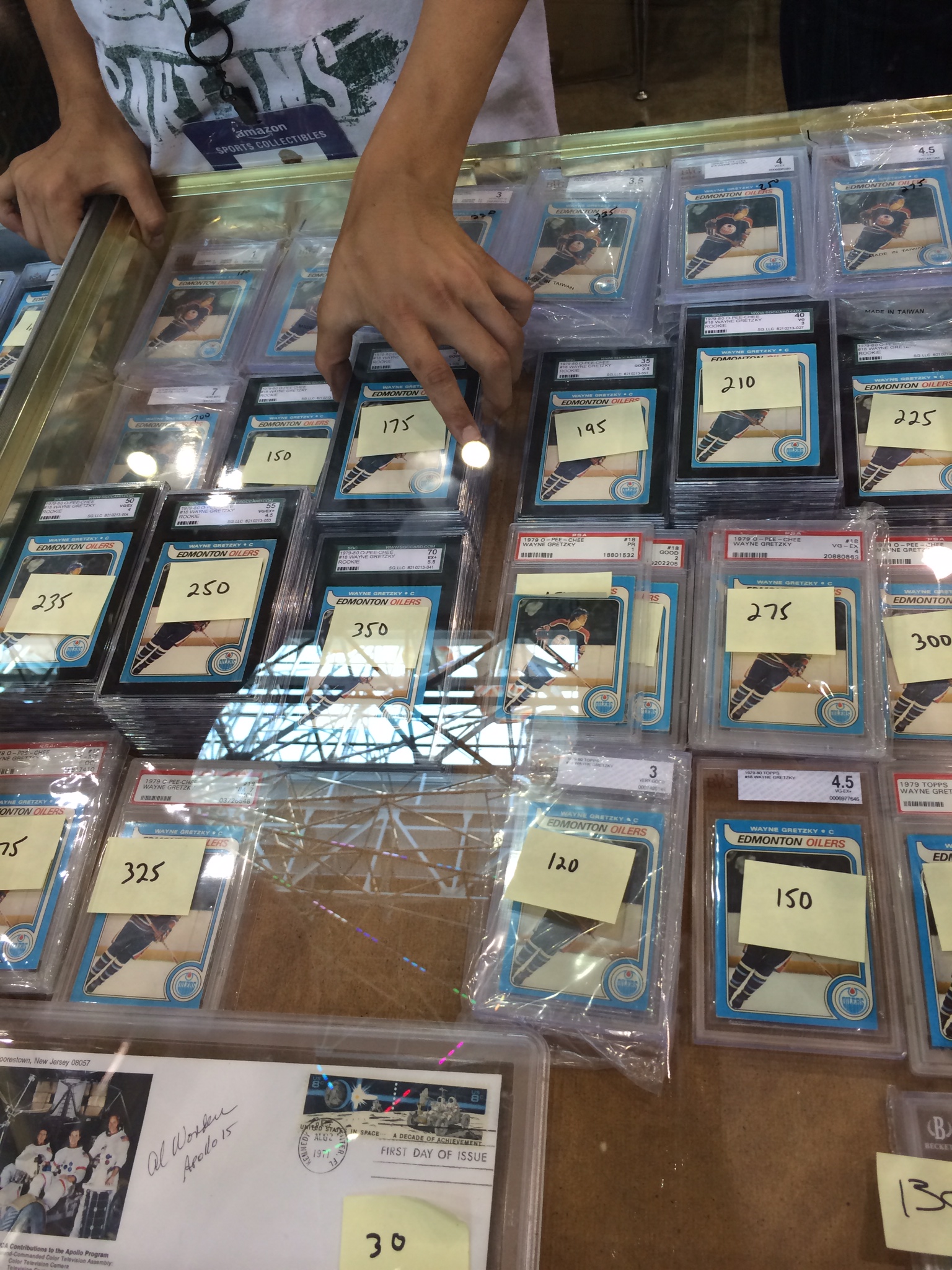 BS: The hockey collector selling these Gretzky rookies told me that someone showed up and cleaned out “half the case,” then explained, “I dunno, Gretzky’s hot right now.” Because that totally makes sense. 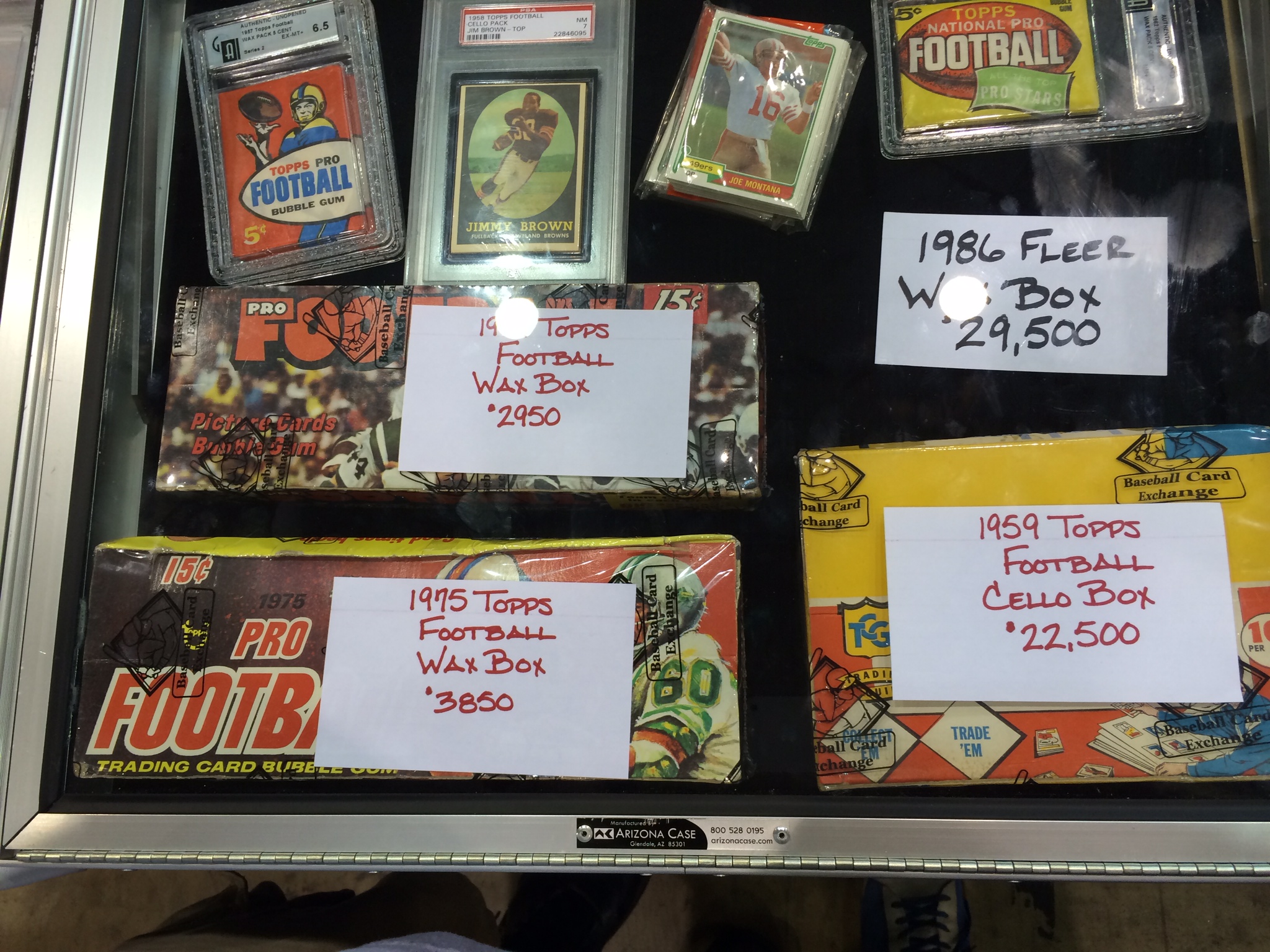 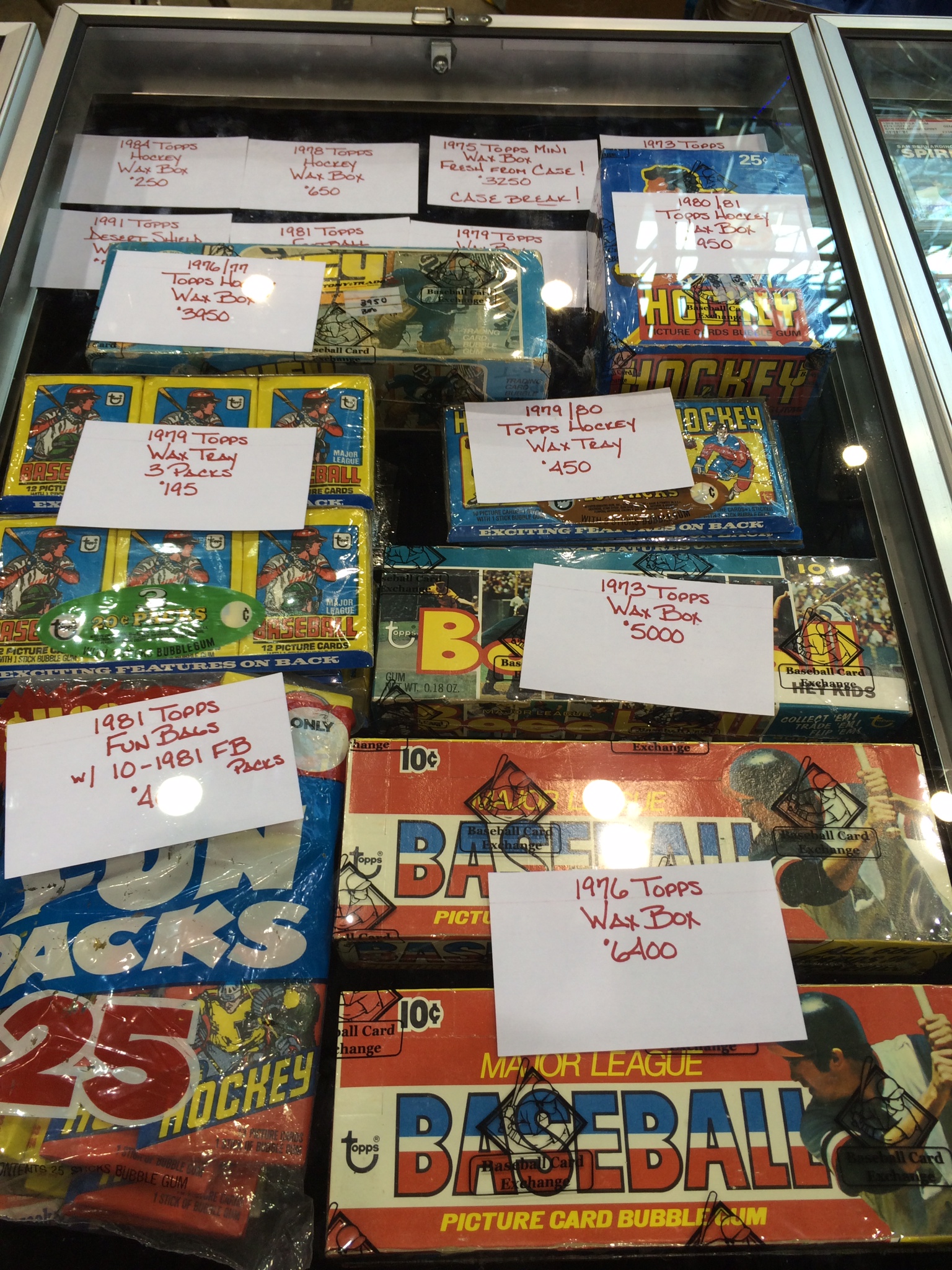 BS: See, unopened Topps boxes from the 1950s, 1960s and 1970s are blowing up. Especially in football and basketball. Our friend at Baseball Card Exchange said he moved so many NBA boxes during the VIP auction that he eventually bumped the price of a 1987 Fleer basketball box from $1,500 (2013) to $2,900 (2014). Those old Topps boxes were my favorite things to collect — they look cool and they’re an incredible ongoing test of willpower (especially when it’s 3 a.m. and you’re drunk). 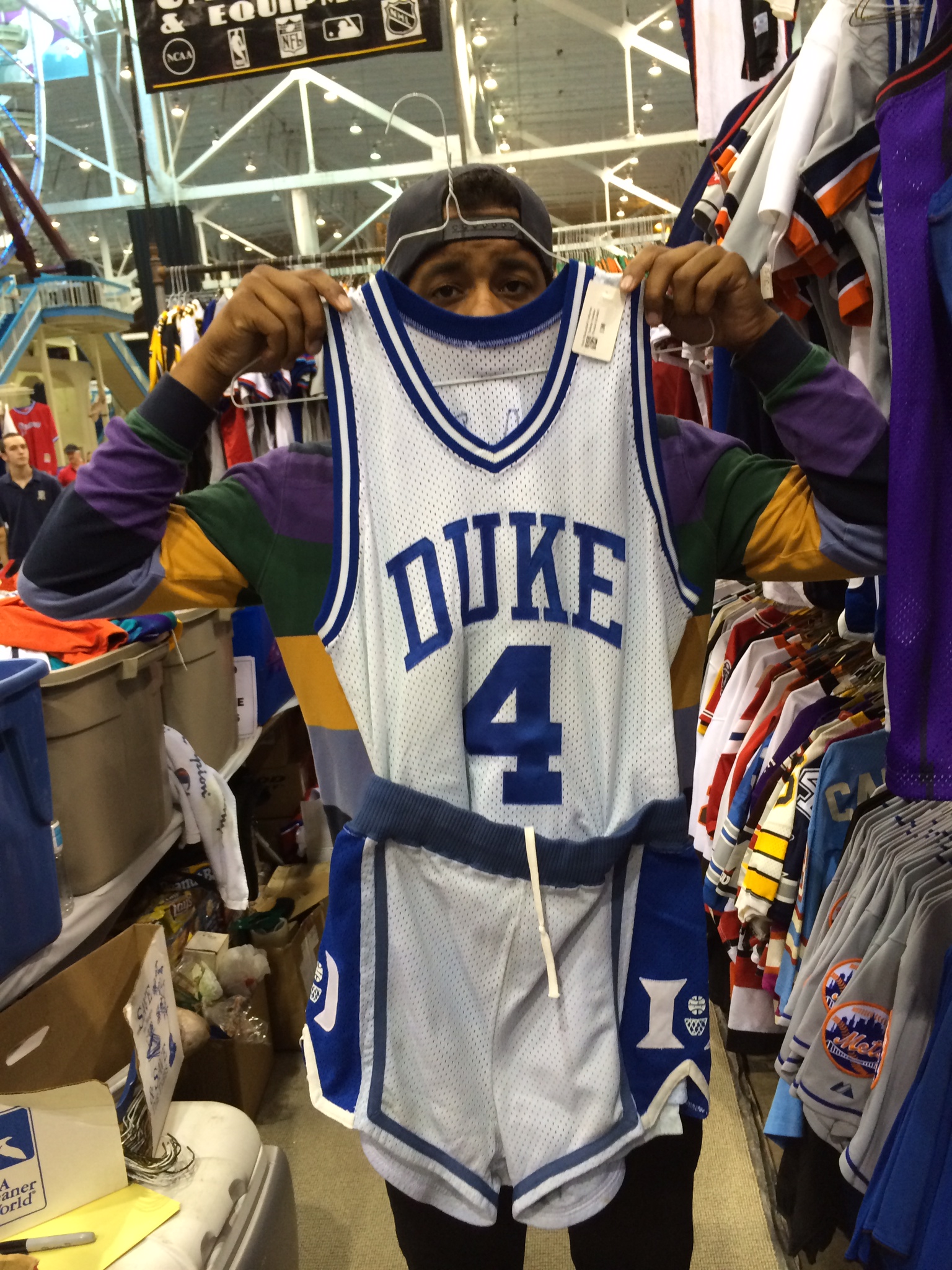 BS: The complete-uniform market is taking off — an important development for grown men with disposable income who don’t think it’s already strange enough that they’re wearing someone else’s jersey. You want strange? Watch this … I’m putting on the pants too!

RB: If you see anyone not named “Tommy Amaker” wearing this, Obama will pardon you should you decide to embarrass them in front of their closest friends and family. 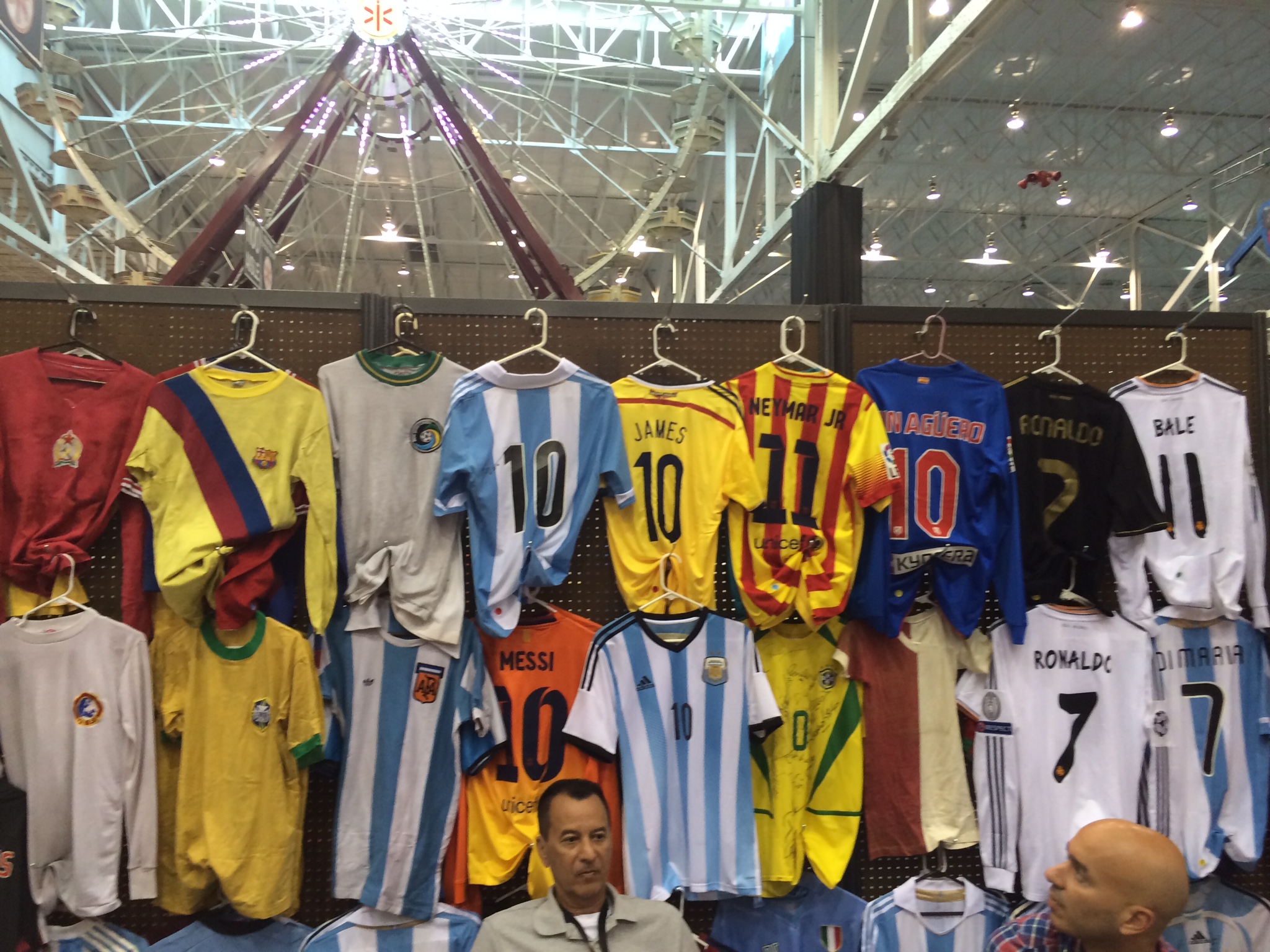 BS: We knew soccer couldn’t make it in America until it had its own Sports Collectors Convention booth that everyone ignored. Baby steps.

THE BELATEDLY RACIST AND/OR OFFENSIVE AWARDS 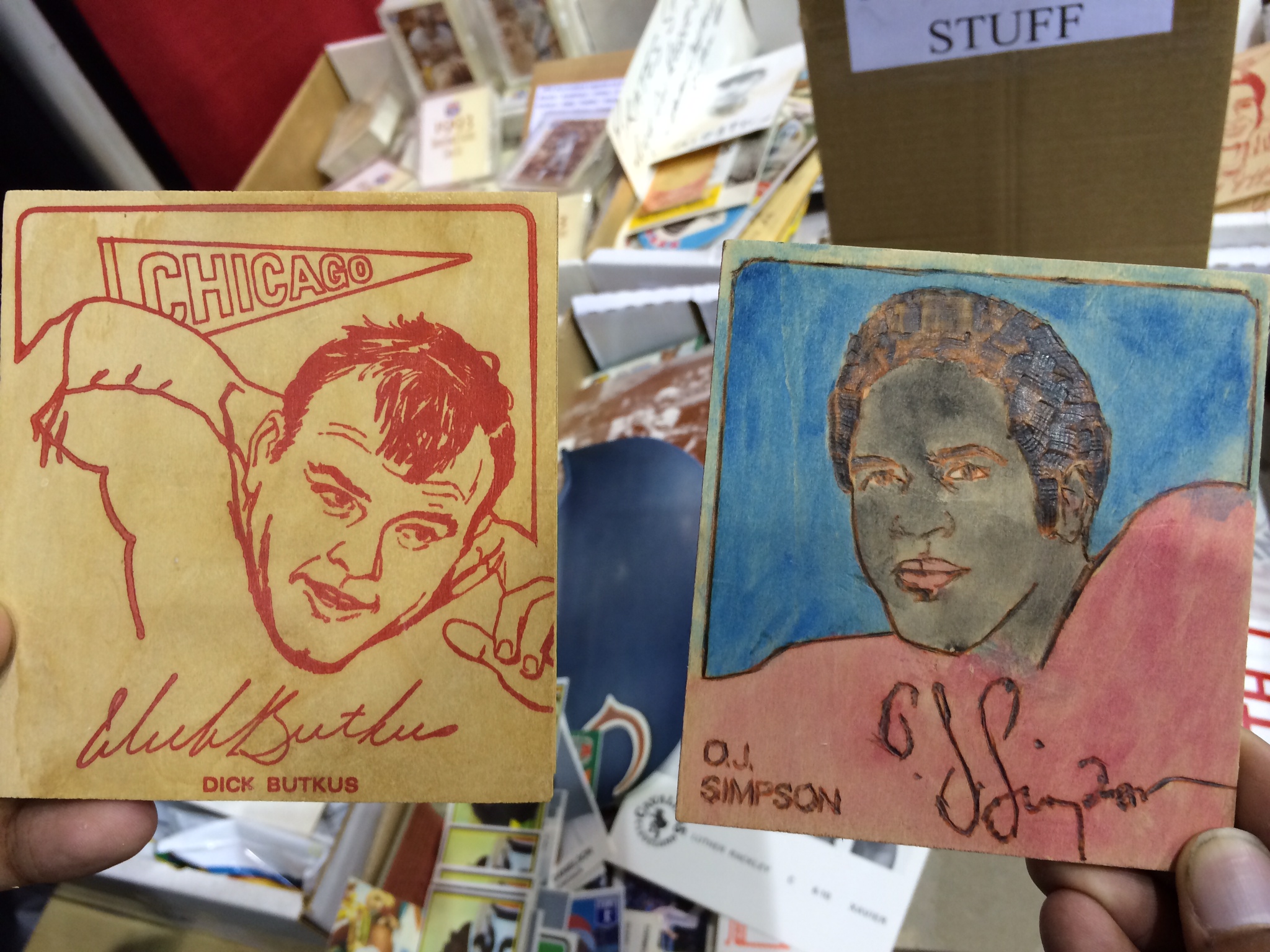 RB: One of my goals in life is to buy all the racist items at flea markets, just to get them off the streets. You should see the amount of hate in my storage unit.

BS: At the convention, you mastered the art of “being horrified by something racist while simultaneously being delighted that the same item was so absurdly over-the-top racist.”

RB: Still unclear why the artist colored O.J. in with charcoal. He looks like a dusty The Thing. 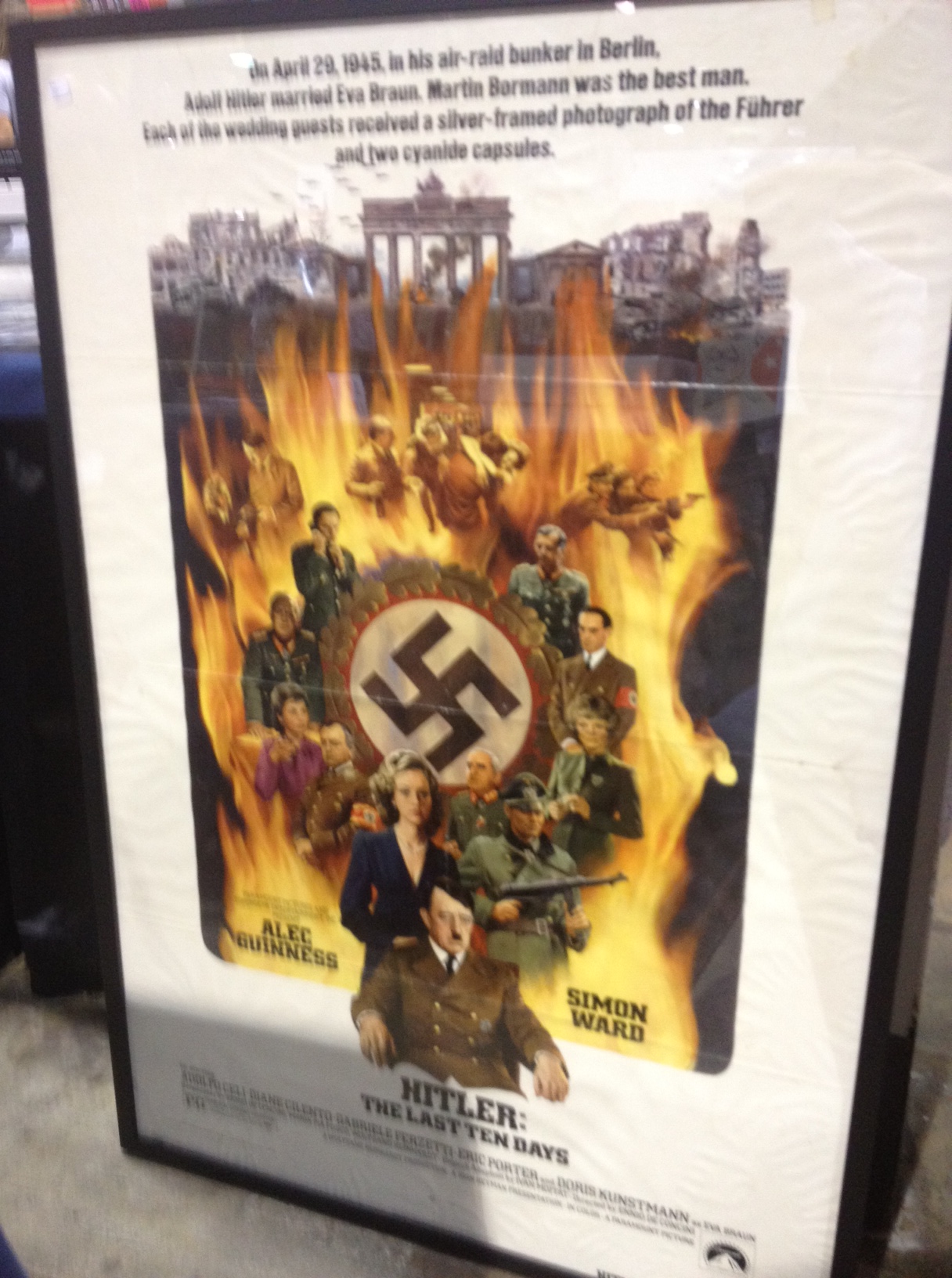 RB: The terrible thing is, at one point, I’m sure this was a gift. 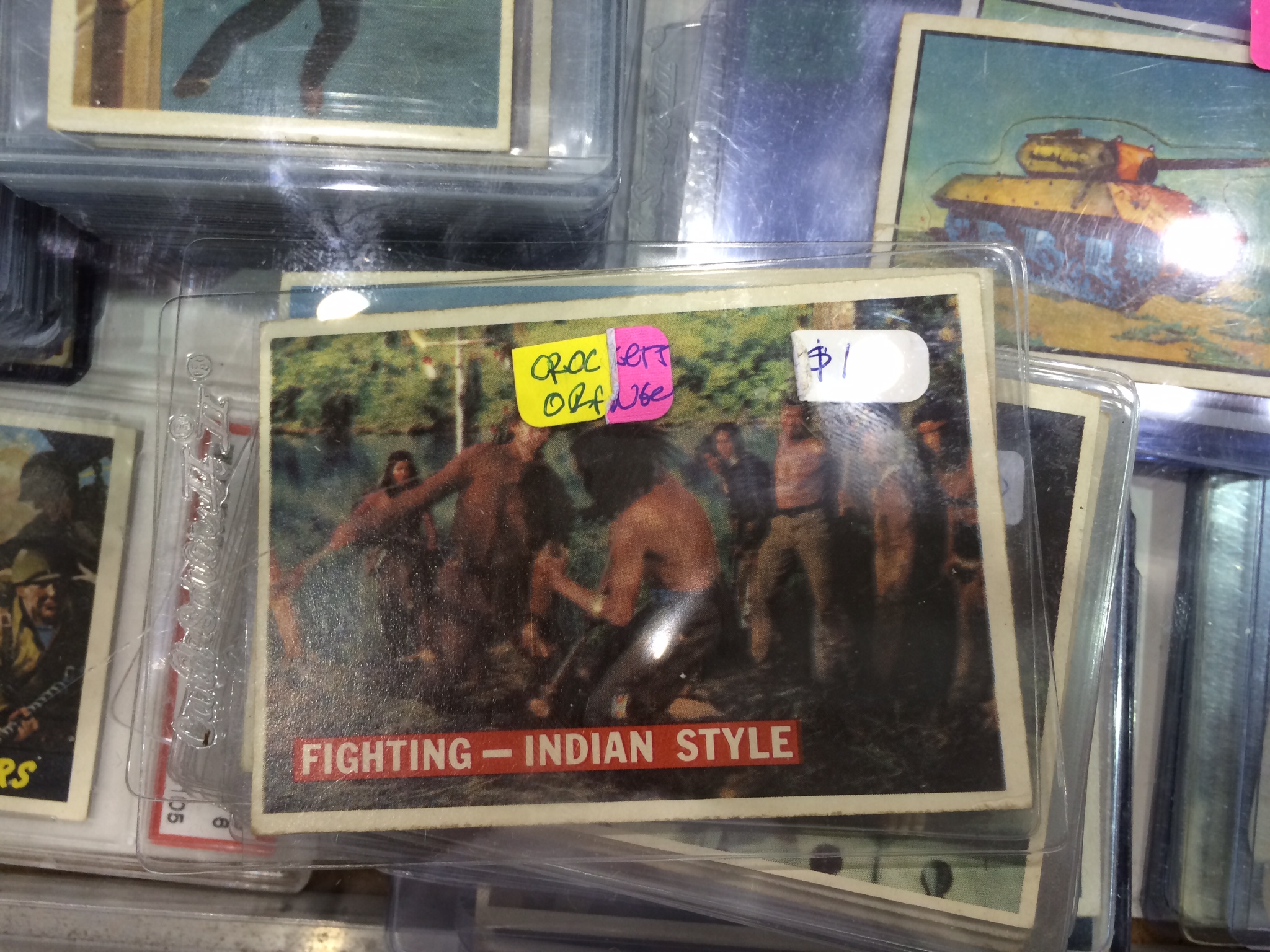 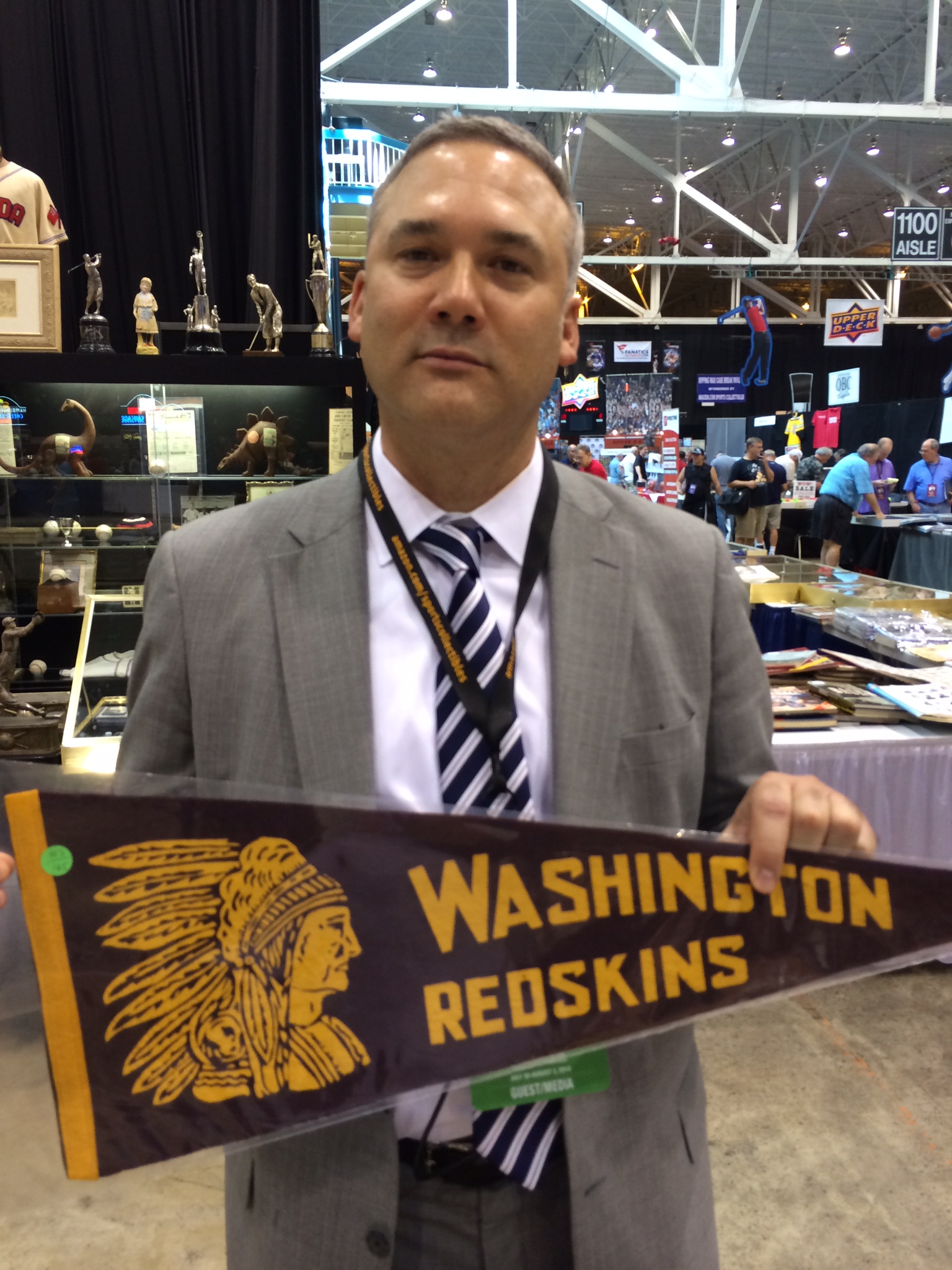 BS: That’s Joe House, a lifelong fan of the Washington Professional Football Team, somberly holding a remnant of the franchise’s once-racist ways. And by “once-racist,” I mean “right now.”

RB: If Dan Snyder sees this, Joe House might be the lucky recipient of a big-time LinkedIn request (fingers crossed). 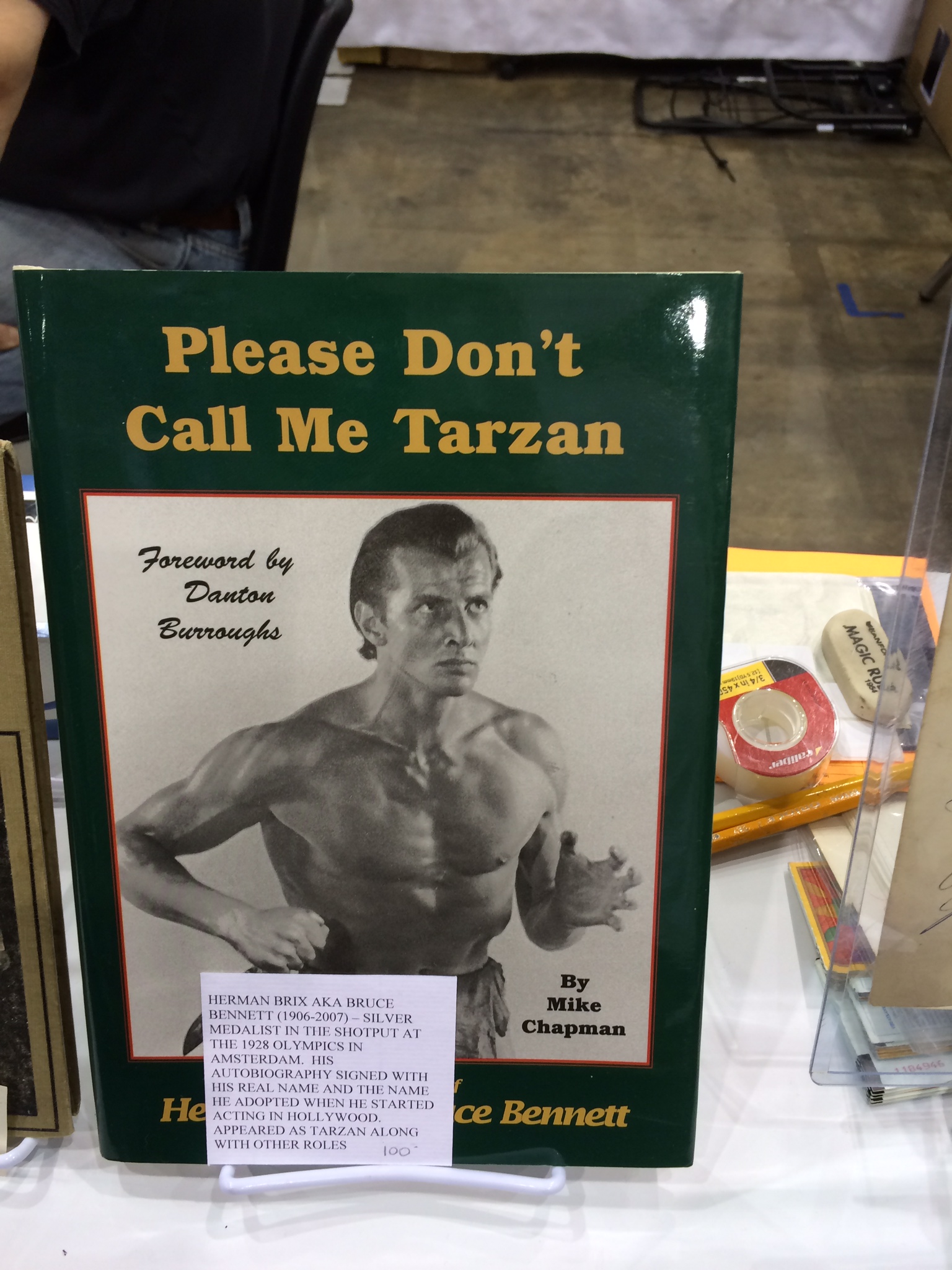 RB: I imagine this book is just filled with scenarios that could occur should he be called Tarzan. Terrifyingly violent, unmerciful scenarios. 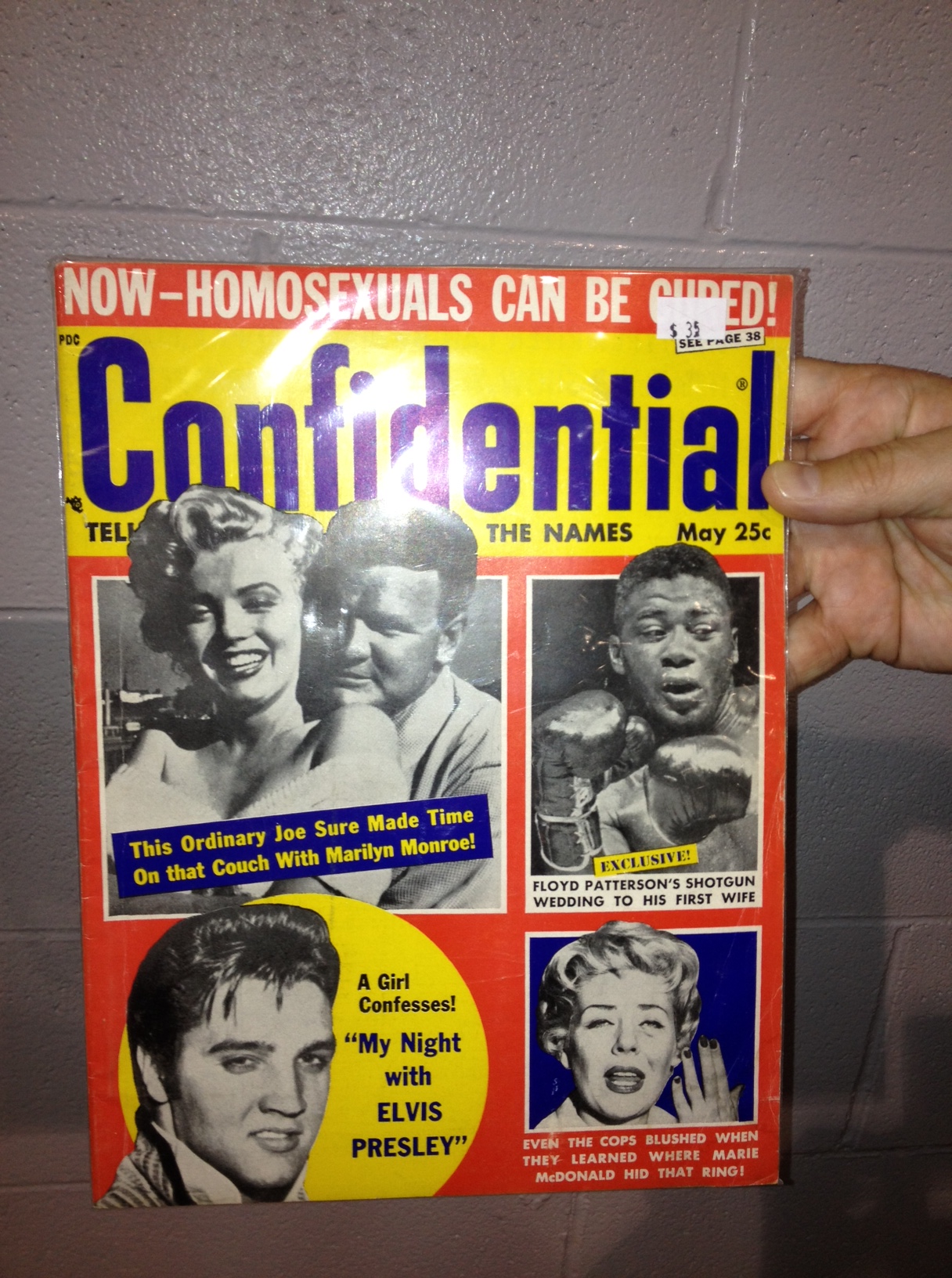 RB: MediaTakeOut has been around for a long, long time. 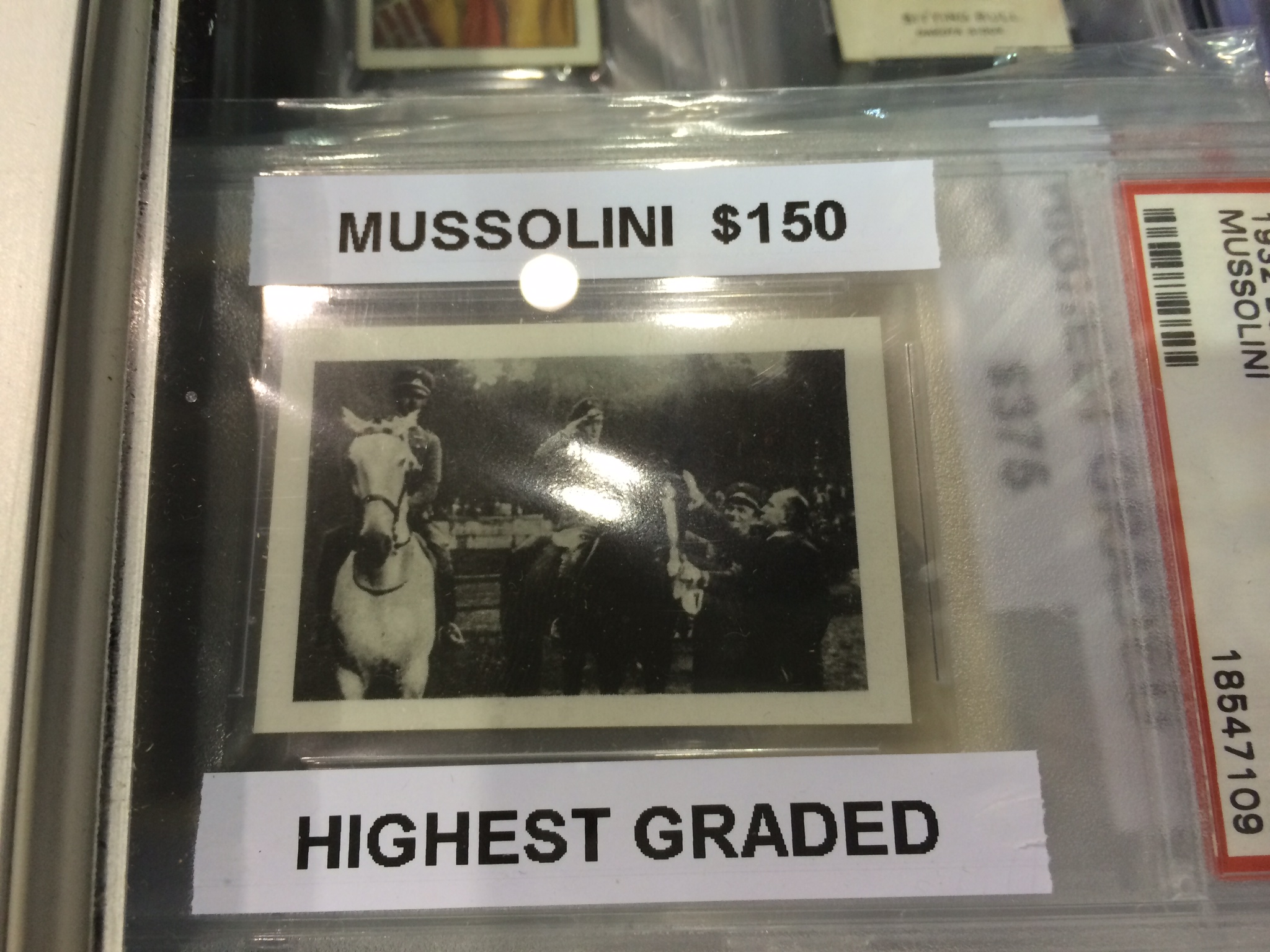 BS: “Excuse me — does ‘highest graded’ mean the card, or just Mussolini on the scale of evil dictators in general?”

RB: While understandably disrespectful, “Mint Mussolini” would be an incredible rap name. Also: Something Rick Ross will certainly refer to himself as in the next six months. 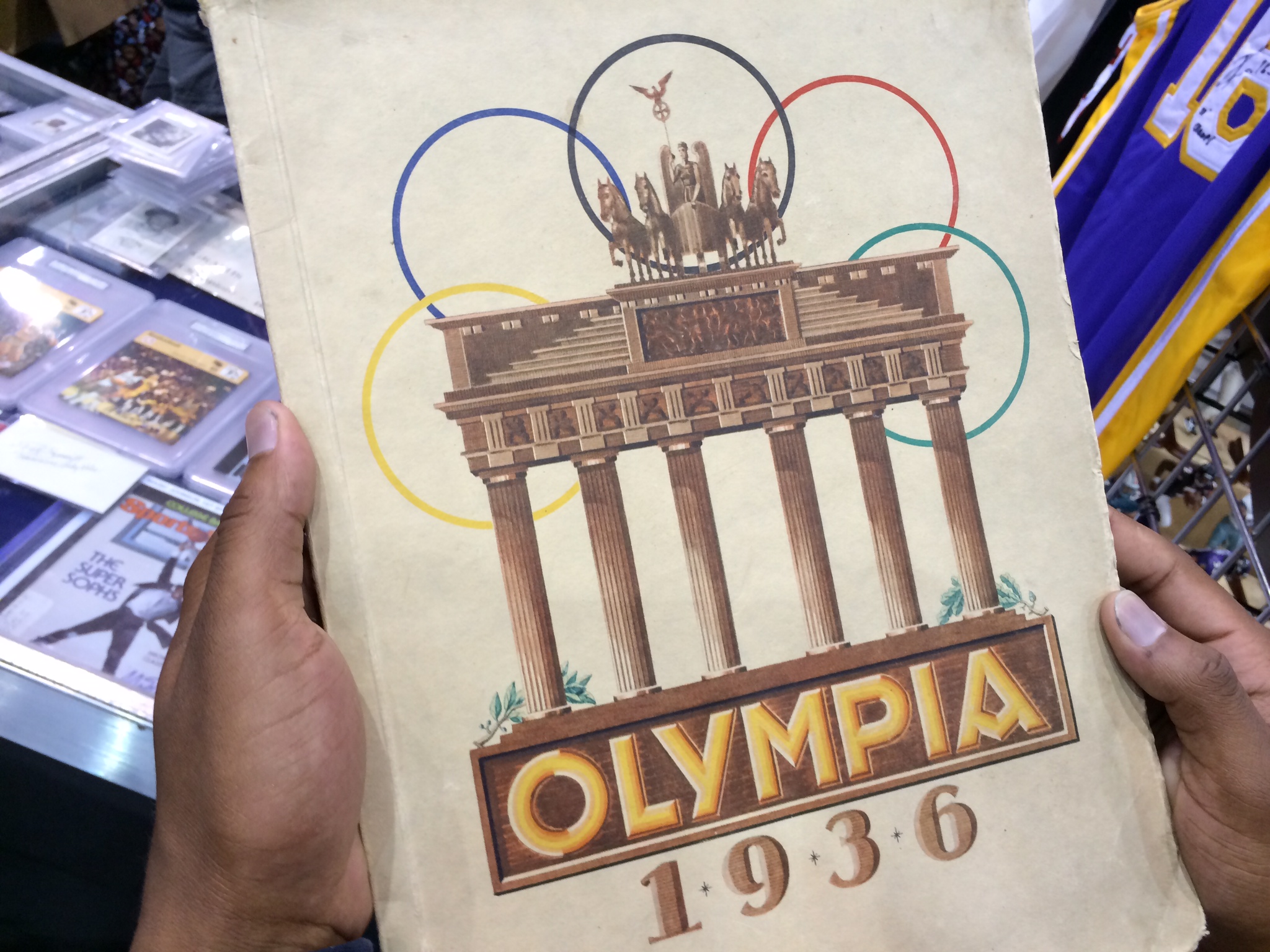 BS: A scrapbook of German newspapers from before, during and after the 1936 Olympics in Berlin. This was definitely a one-of-a-kind piece. Even if there’s no good way to explain collecting stuff from the 1936 Olympics short of saying, “I am a huge, huge, HUGE weirdo.”

RB: Yeah, “weirdo,” except rearrange the letters so it spells “fascist.” 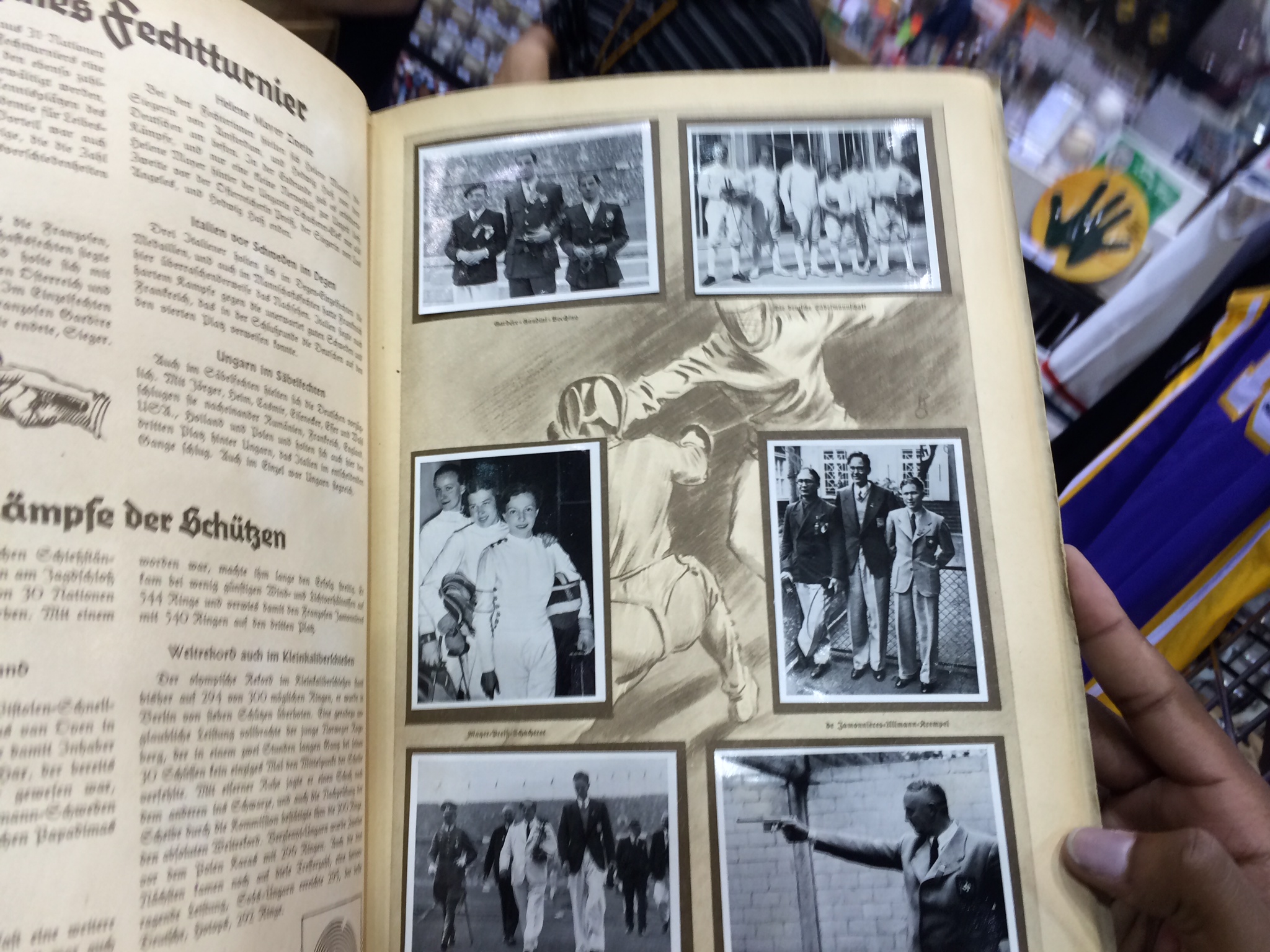 BS: We enjoyed this particular page because German shooting gold medalist Cornelius van Oyen (bottom right) was dressed kinda like Joe House that day. That’s right: the collectors convention — where you make jokes about your friends dressing like Nazis without anyone’s feelings being hurt. Sign me up for next year! 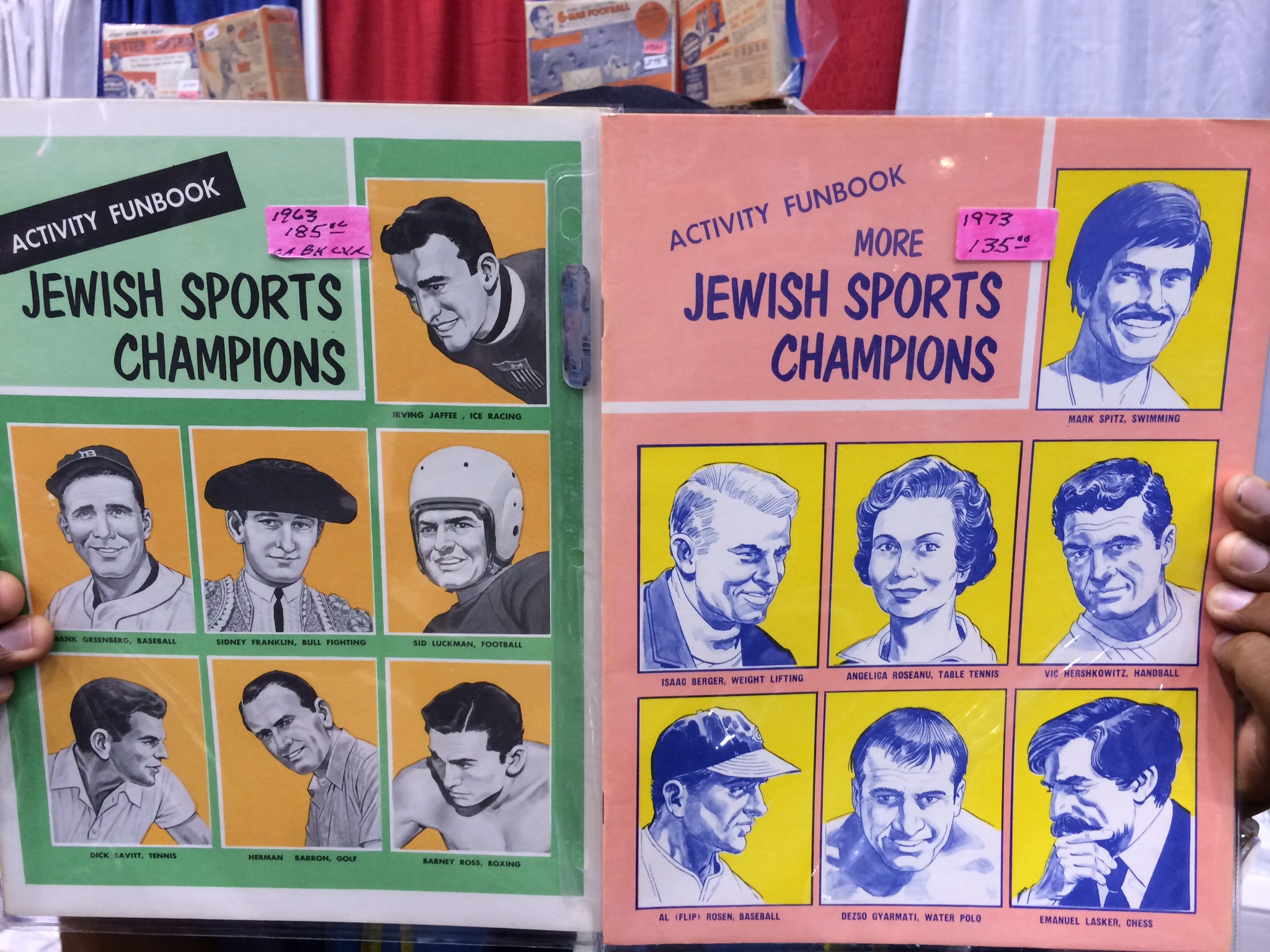 BS: I learned that these books weren’t offensive after my first photo essay in 2011, when multiple Jewish friends upbraided me for NOT purchasing them. In my defense, I was waiting for Even More Jewish Sports Champions.