A Visit to the 2014 National Sports Collectors Convention, Part 3

A Visit to the 2014 National Sports Collectors Convention, Part 5

THINGS WE NEVER WOULD HAVE BOUGHT BUT STARED AT ANYWAY 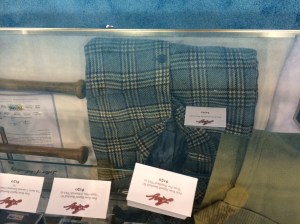 RB: Duh, Bill. Because of Bear, Forrest got to meet JFK and then drink 15 free Dr Peppers and then tell JFK he had to pee. LIKE I DON’T KNOW WHO THE REAL BEAR BRYANT IS? 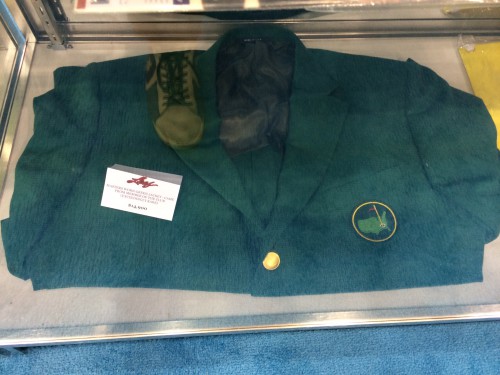 BS: And that’s a real Masters jacket (courtesy of a member who belonged to Augusta). I may or may not have spent a couple minutes pretending that I bought this jacket while saying Jim Nantz things. There’s a new Master at the 2014 National Sports Collectors Convention, and his name is Bill Simmons! Or, A green jacket for the man who bleeds Celtics green!

BS: And then I walked away. 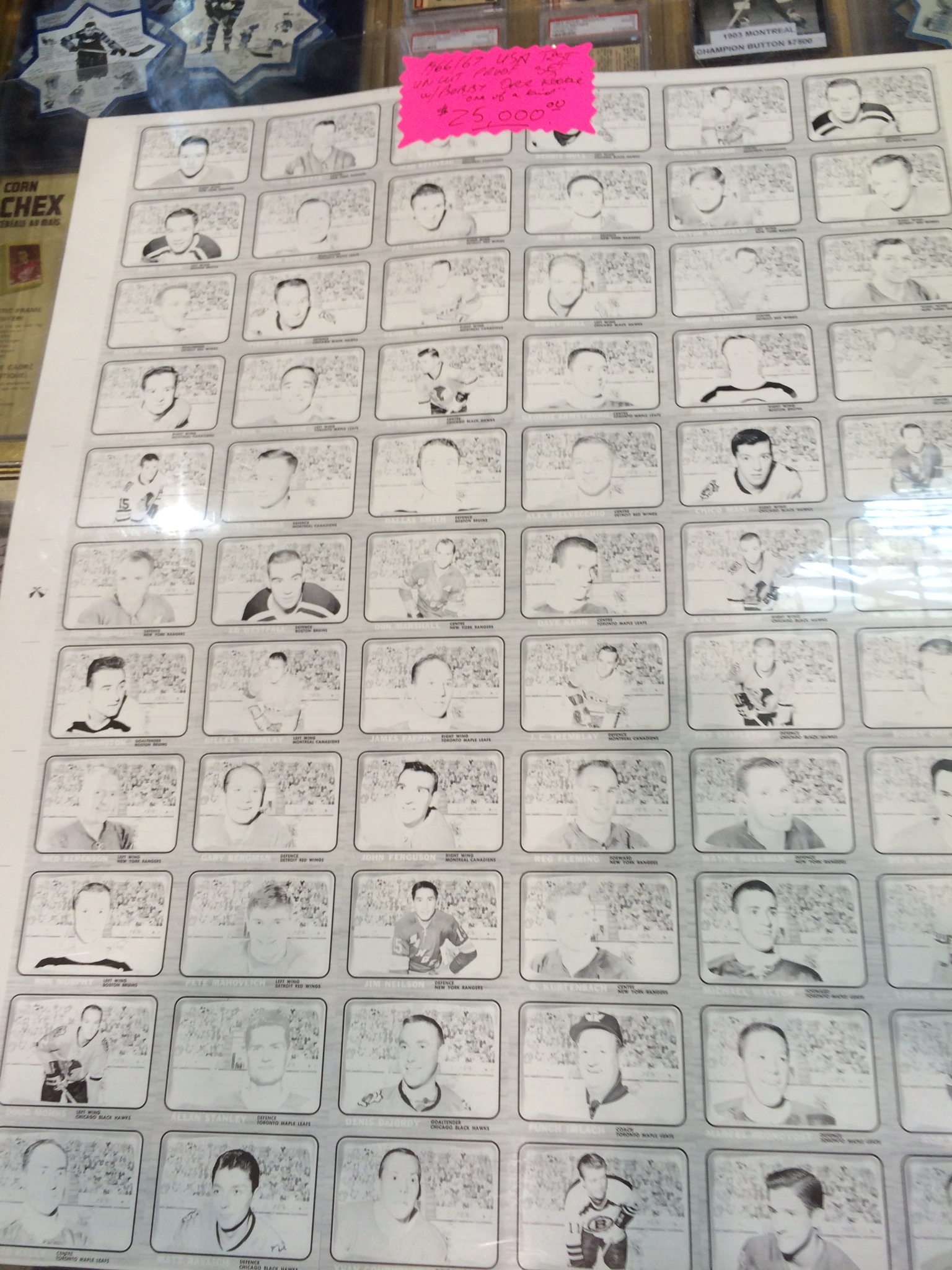 BS: Now here’s a one-of-a-kind piece — an uncolored, uncut sheet proof of 1966-67 Topps hockey cards from Bobby Orr’s rookie year. They were asking $250 million for this thing (all numbers approximate).

RB: I really have the urge to color them all in, like O.J. 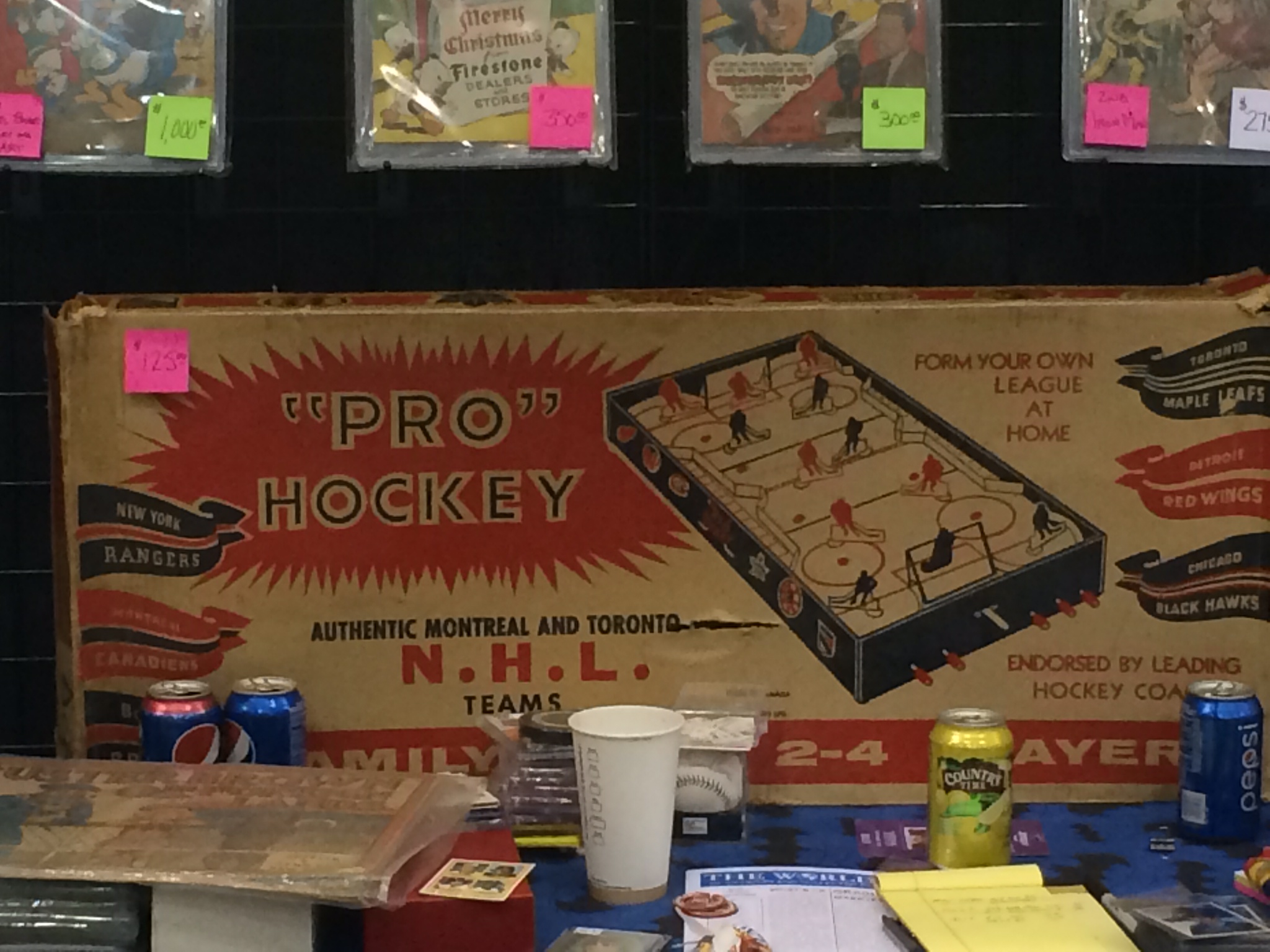 BS: I loved this old hockey game 82 percent as much as I loved … 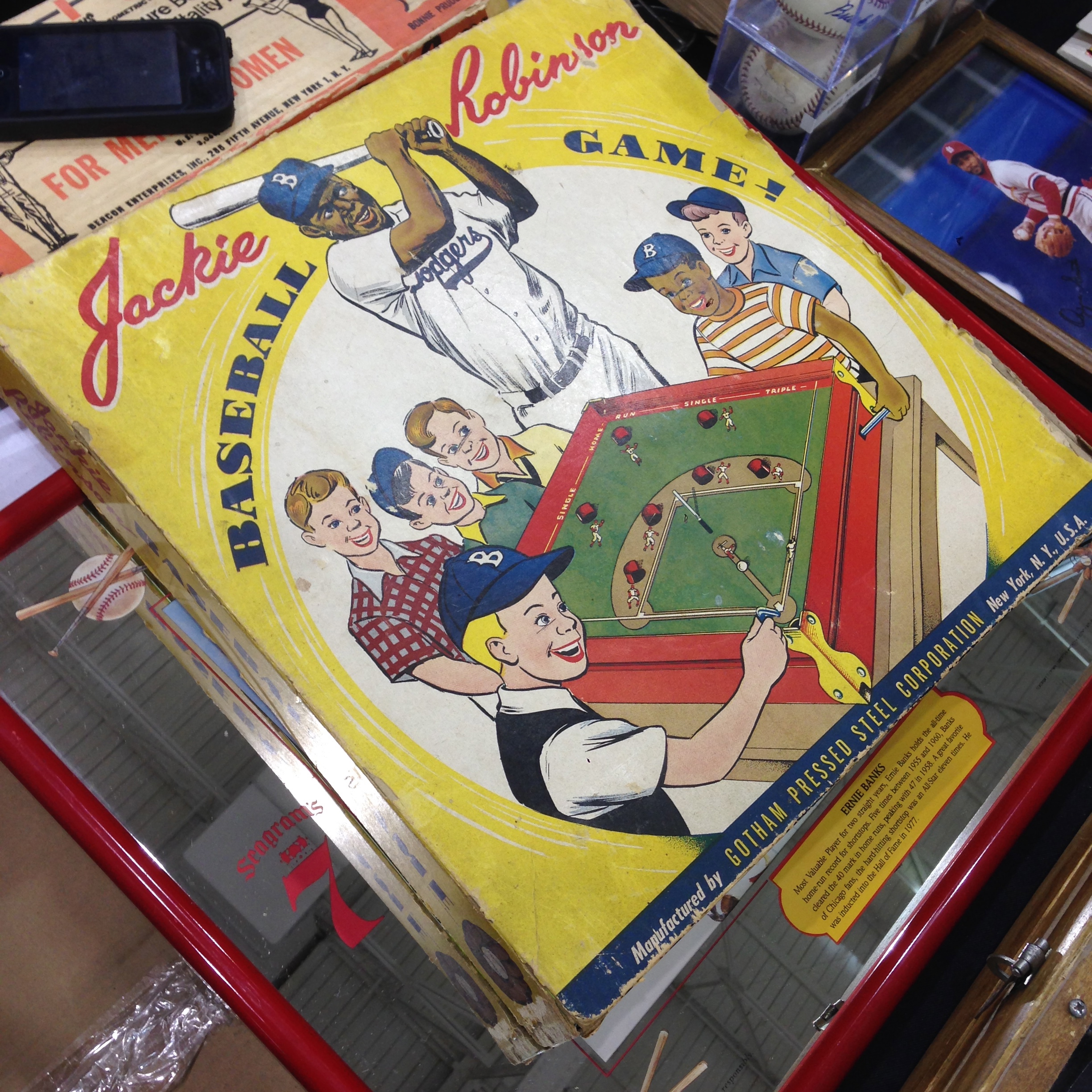 BS: This Jackie Robinson baseball game. Both would look incredible crammed into the back of my garage. 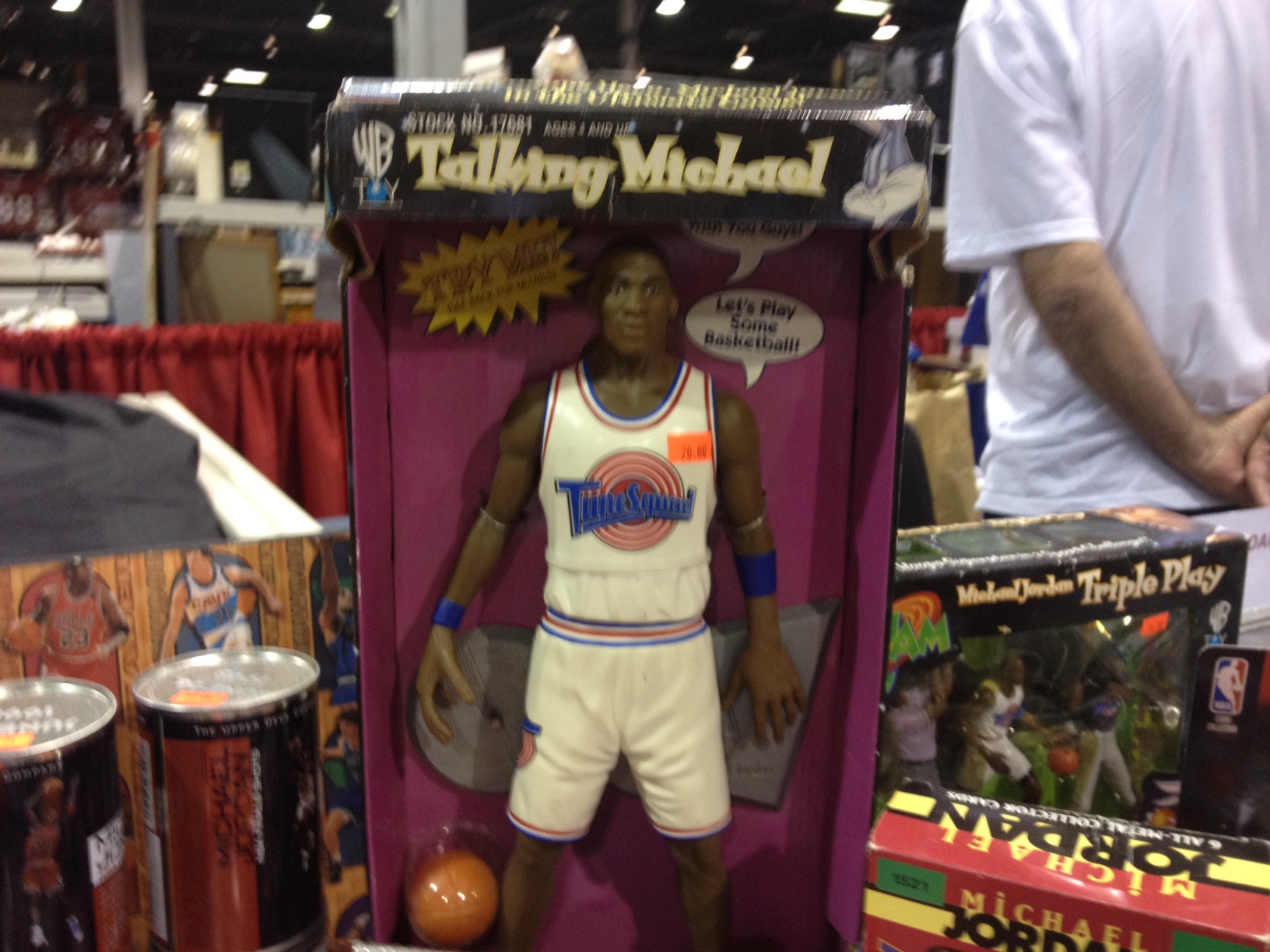 RB: I wonder what Talking Michael says if you call him a “doll” instead of an “action figure.”

BS: Almost bought this just to see if Talking Michael said things like, “YOU ARE THE BIGGEST PUSSY I HAVE EVER PLAYED WITH!” and “Where’s my casino host? I need a marker for another $500,000.” 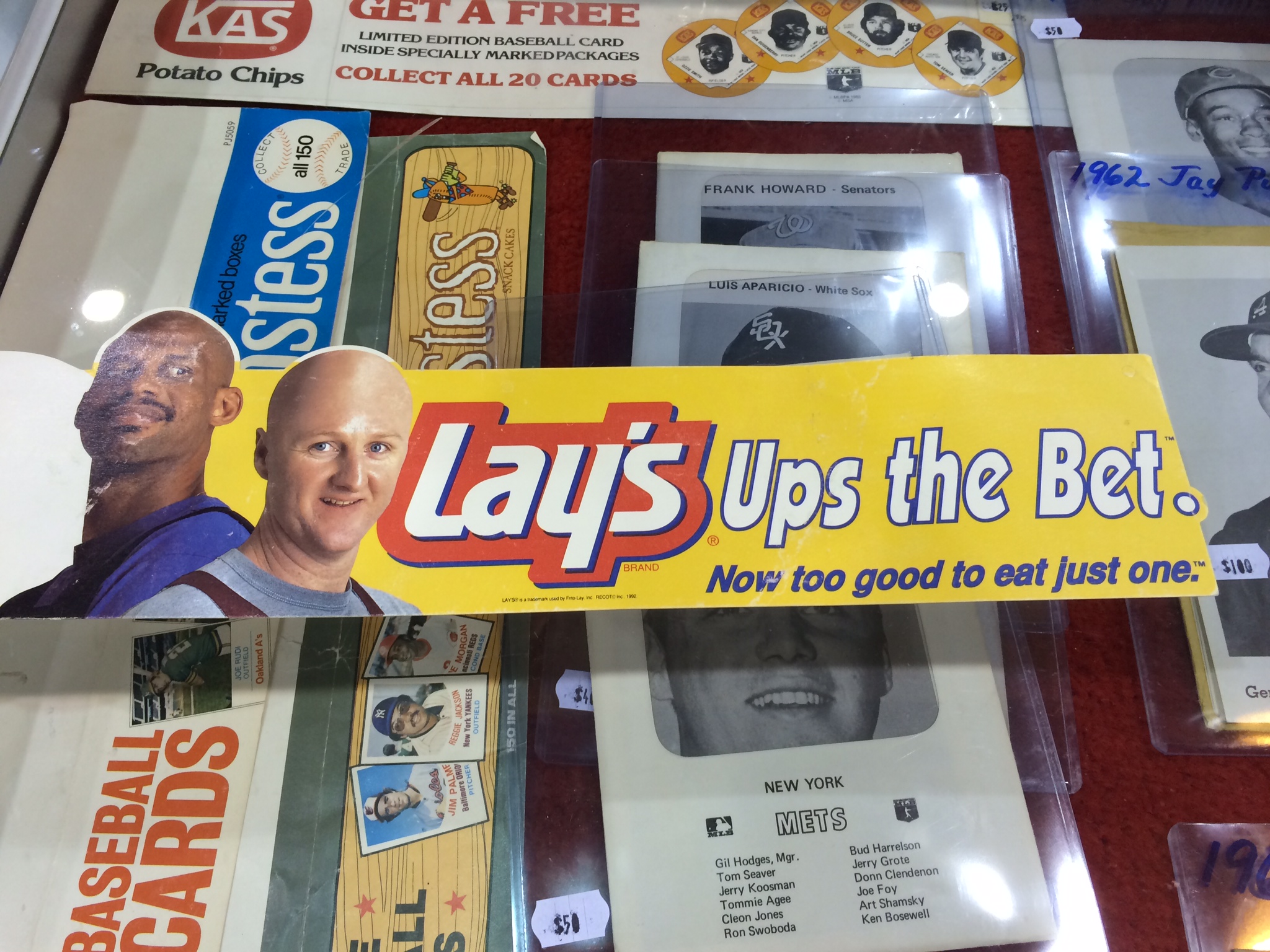 BS: Bald Larry Bird is the worst Larry Bird. Why did they keep defaming the Legend at the collectors convention????

RB: That is an ugly man right there. But it’s the price you pay if you want that Lay’s money. 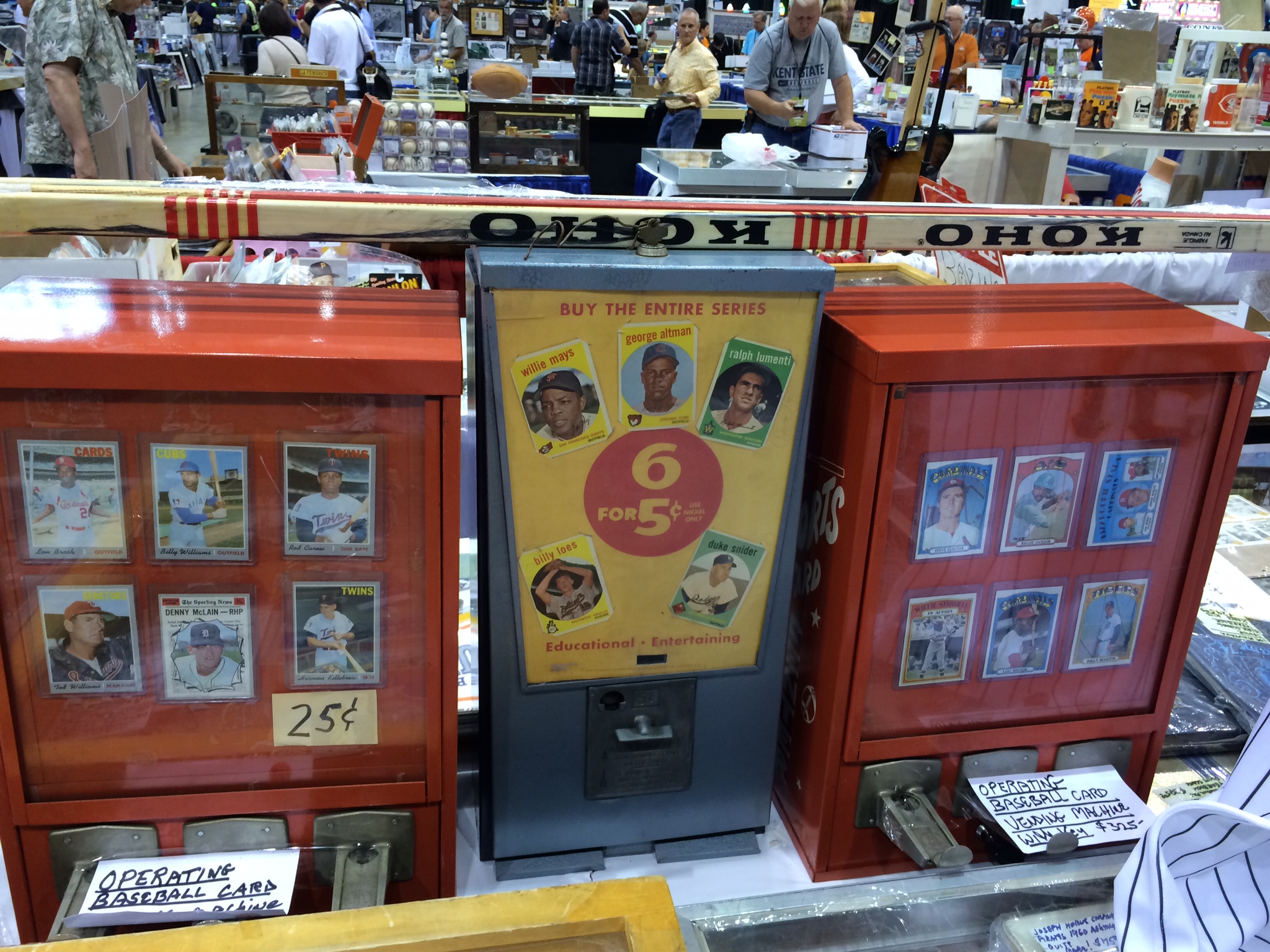 BS: Old-school Topps machines. Now THESE were cool. Like gumball machines but with packs of cards inside them.

RB: I want one of these, but only if it’s a Donruss machine and it spits out only Andres Galarraga cards. 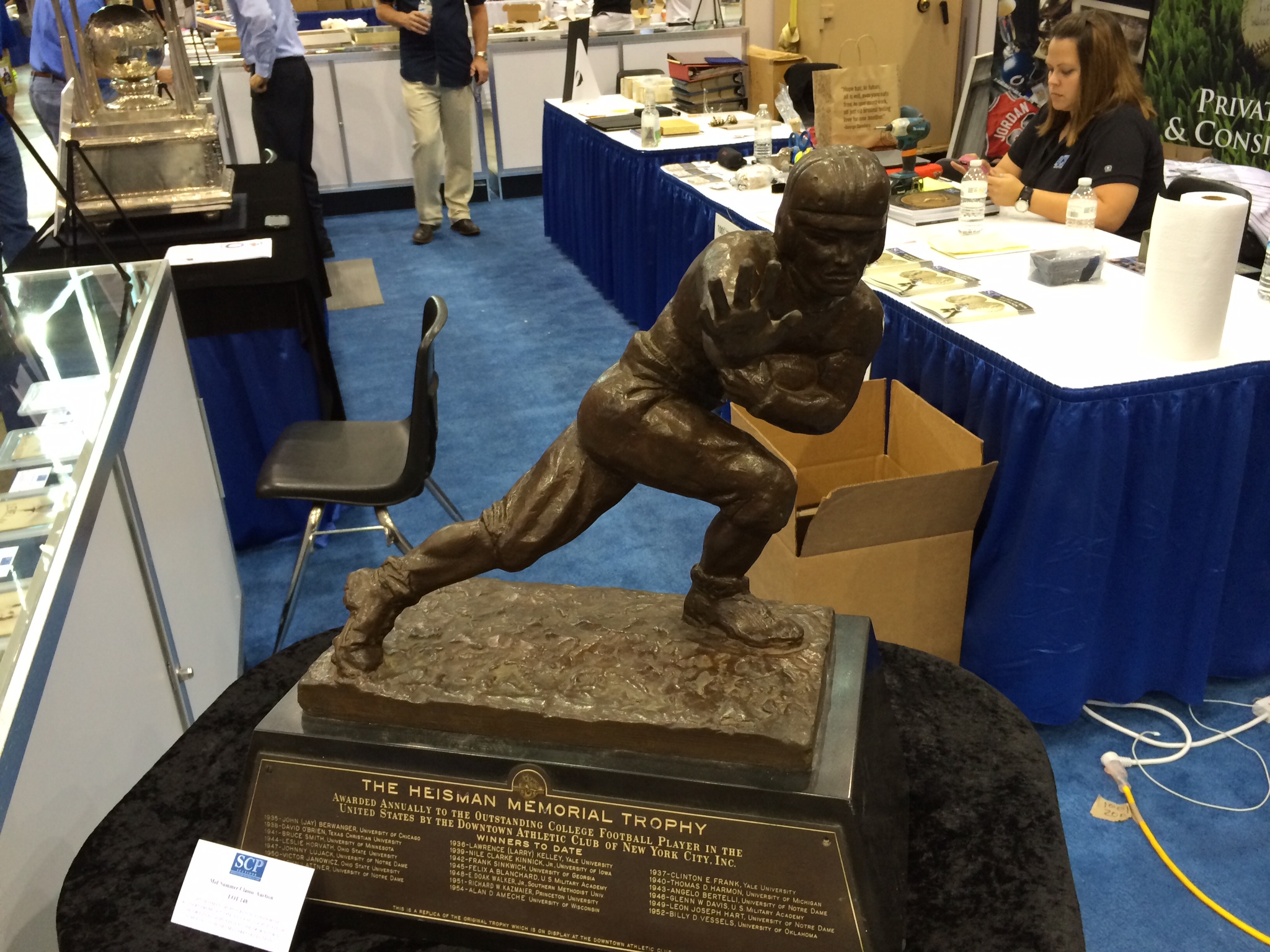 BS: Literally, you could give someone the Heisman.

RB: Not that impressive up close once you realize the Heisman dude is wearing Capris. 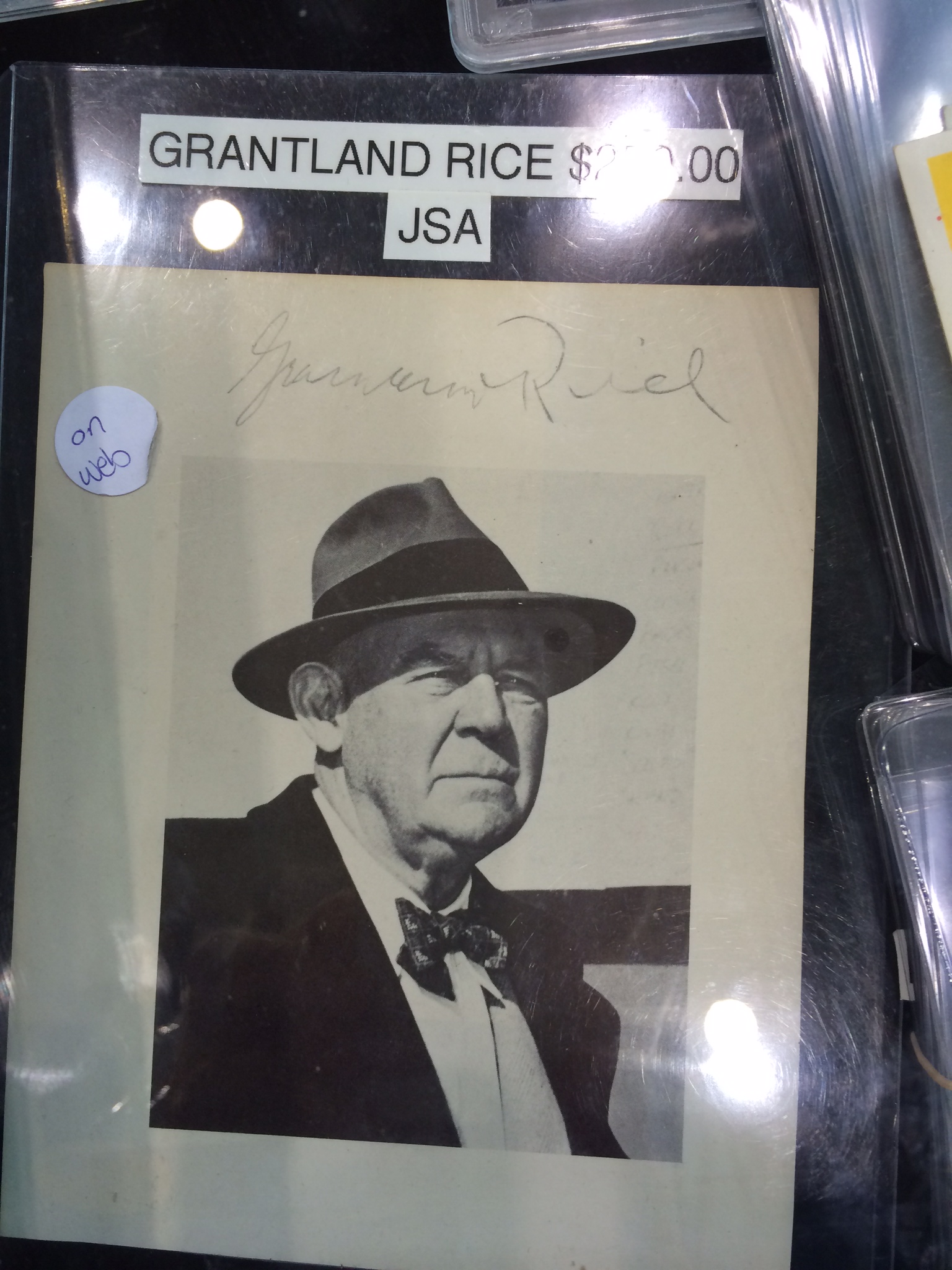 BS: And you wondered why we named our website after him! His signature is worth two hundred and fifty bucks! VINDICATION!

RB: I wonder if he even knows where to put the emphasis in the word “Grantland.” I hope, like me, he whispered “Grant” and screamed “LAND.” 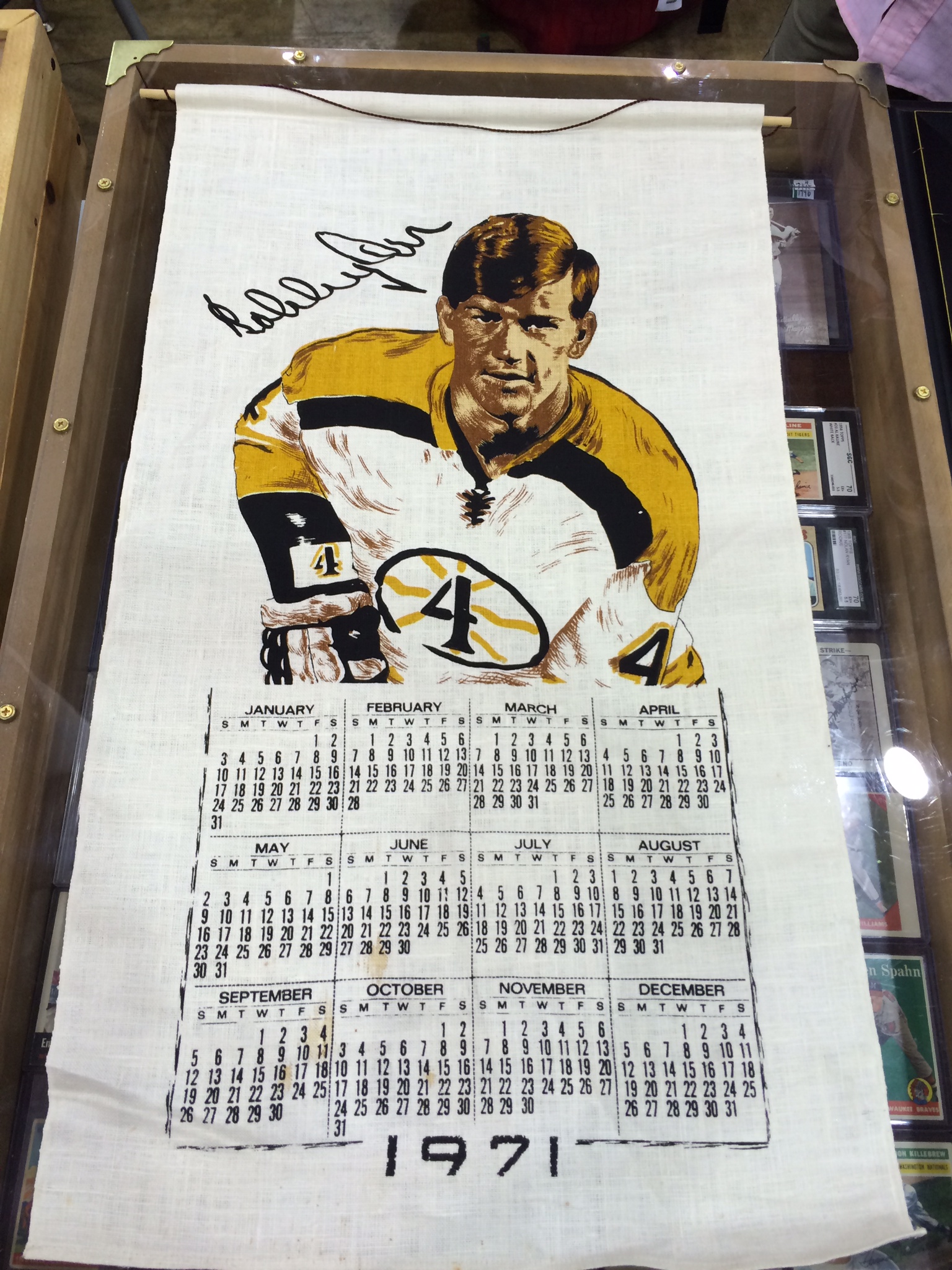 BS: Thought about buying this for my son’s room before backing off because it was a 43-year-old towel/calendar and some 290-pound behemoth Bruins fan named Sully or Murph might have cleaned himself off with it at one point. Rem, did you know my son doubles as my Collecting Beard? He’s not old enough to care about decorating his room yet, so I keep buying stuff for his room that’s really for me. Fatherhood is the best. 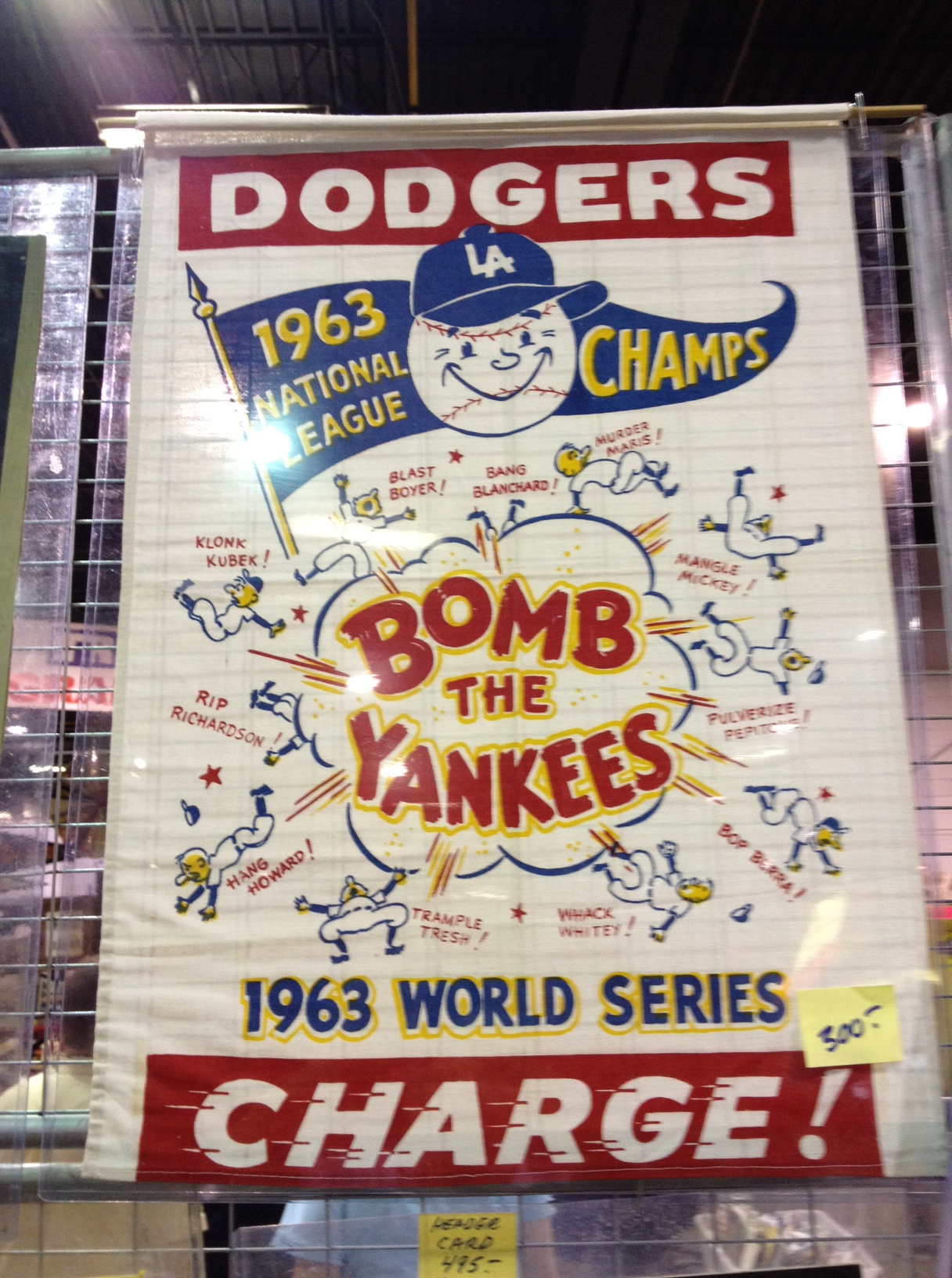 BS: And yet, if someone had been selling a 1970s Red Sox version of a “BOMB THE YANKEES” poster, I would have handed the guy a blank check, signed it and said, “You fill in the number, you decide.” 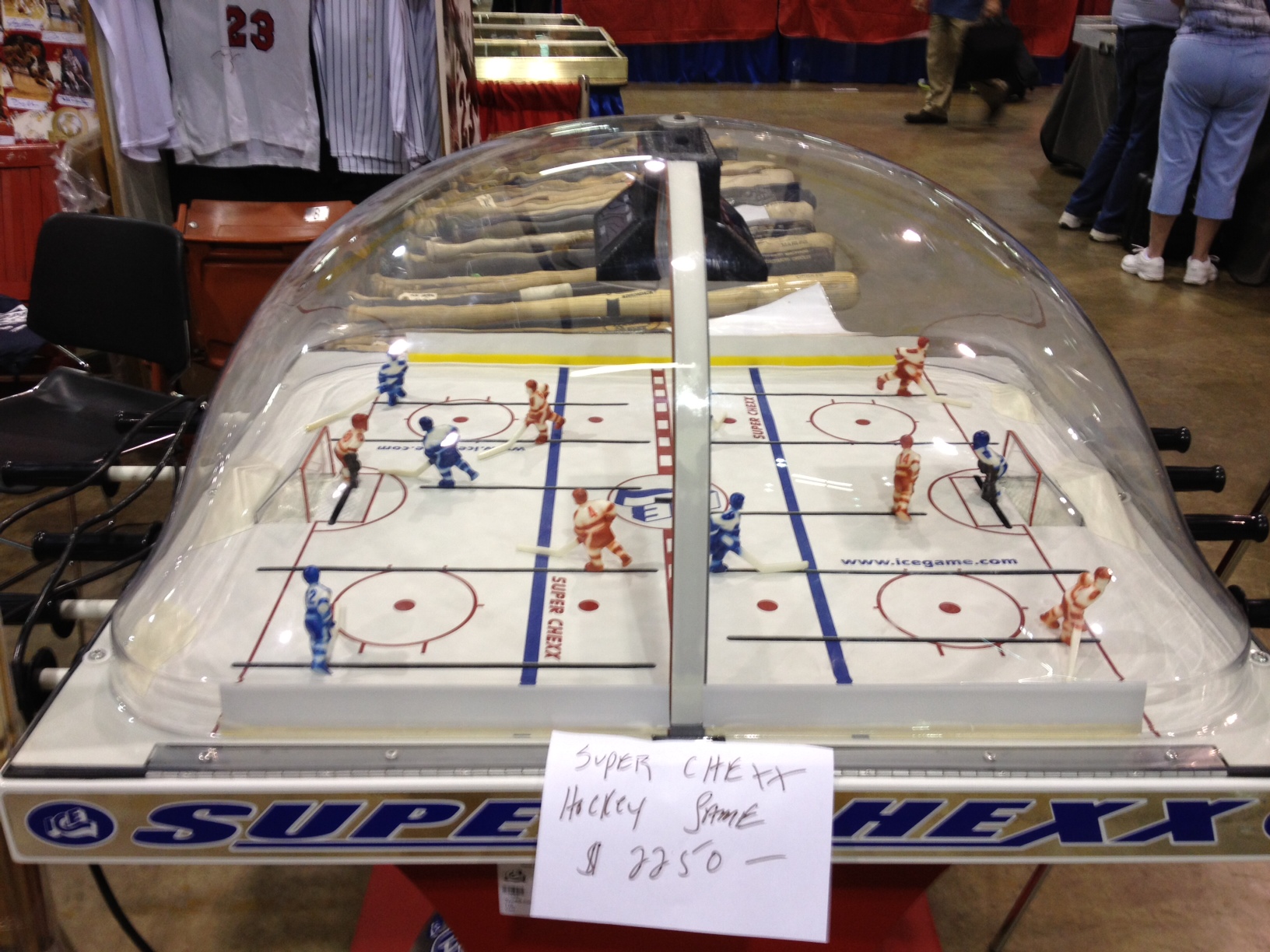 BS: The ideal addition to the Grantland office … if it weren’t $2,250. By the way, everyone has seven or eight elite skills. One of mine is playing this game.

RB: At some point, I’d love to learn about those other six or seven elite skills. And yes, in case you were wondering, collecting Chuck Klosterman trading cards is one of my seven or eight elite skills. 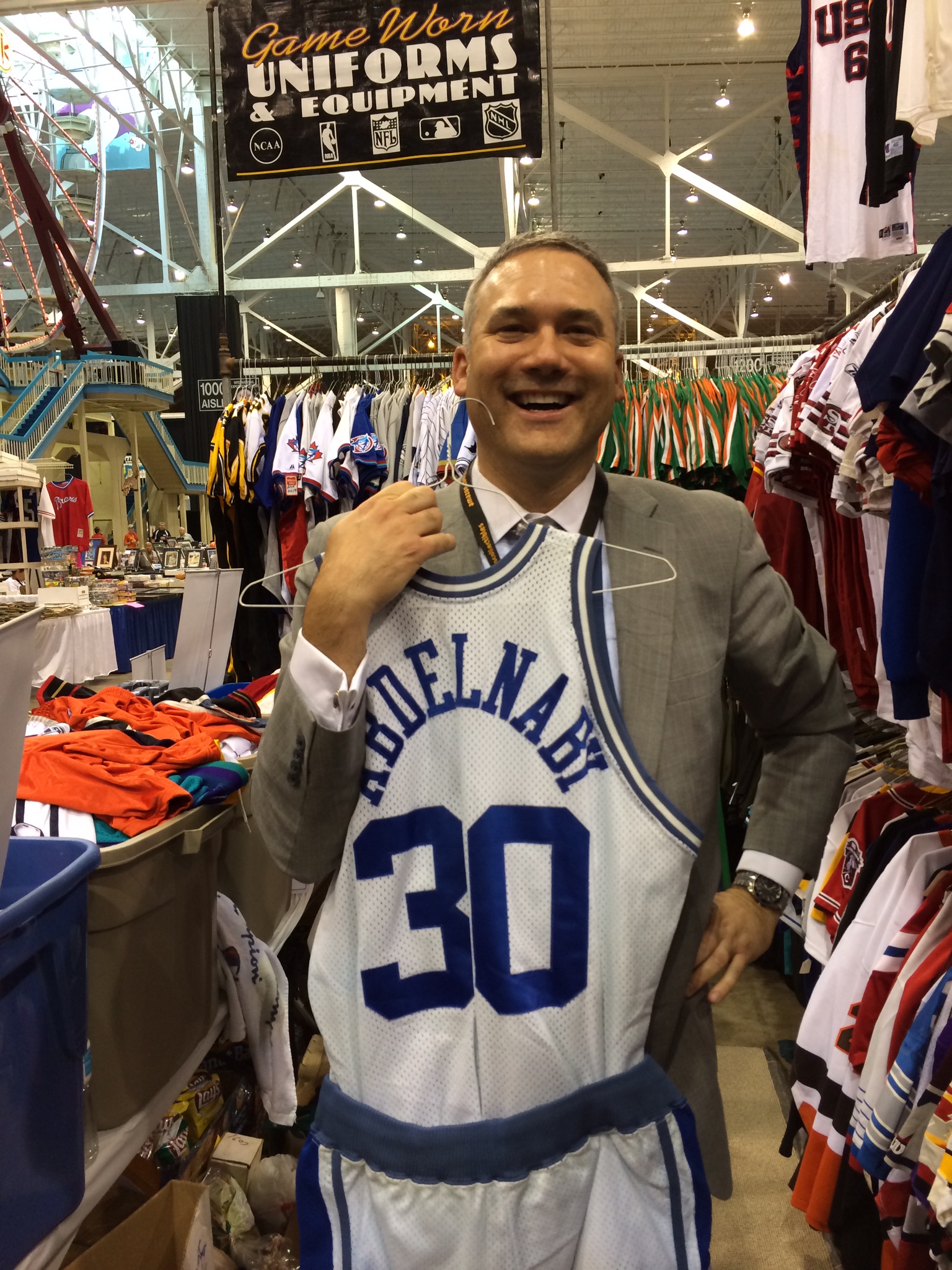 BS: Feels like the final piece to a bet between a UNC fan and a Duke fan. As in, “If you win, I’ll wear the Montross uniform … but if I win, you have to wear the Abdelnaby uniform.” We should have bought this and made House walk around the convention in it, instead of letting him dress like Cornelius van Oyen.

RB: I had a dream that I spilled Sweet Baby Ray’s on the Abdelnaby jersey. And then House ate it. 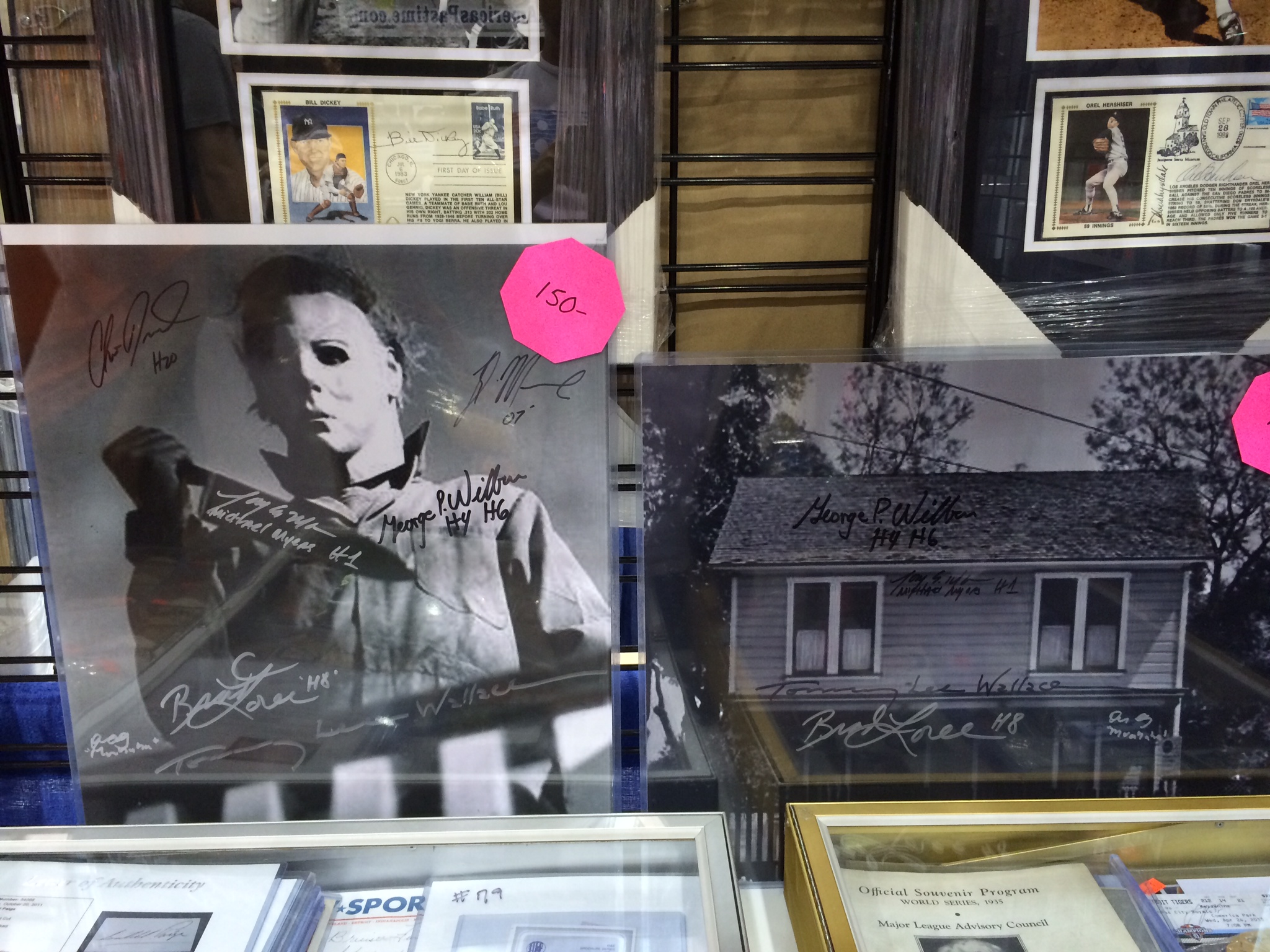 BS: On the left: a Michael Myers photo autographed by everyone who played Myers in the first eight movies. On the right: a photo of the Myers house from Halloween (the real one, not the horrendous Rob Zombie remake) autographed by a few of the cast members. And I’m the biggest Halloween fan there is.

BS: I refuse to purchase memorabilia items from people who aren’t friendly … and the people selling these pictures weren’t friendly. Is it too late for Christopher Guest to make an ensemble comedy about eight different memorabilia collectors going to the year’s biggest convention? I’d cast John Michael Higgins as the aggressively unfriendly collector who keeps driving everyone away from his booth before they buy anything. 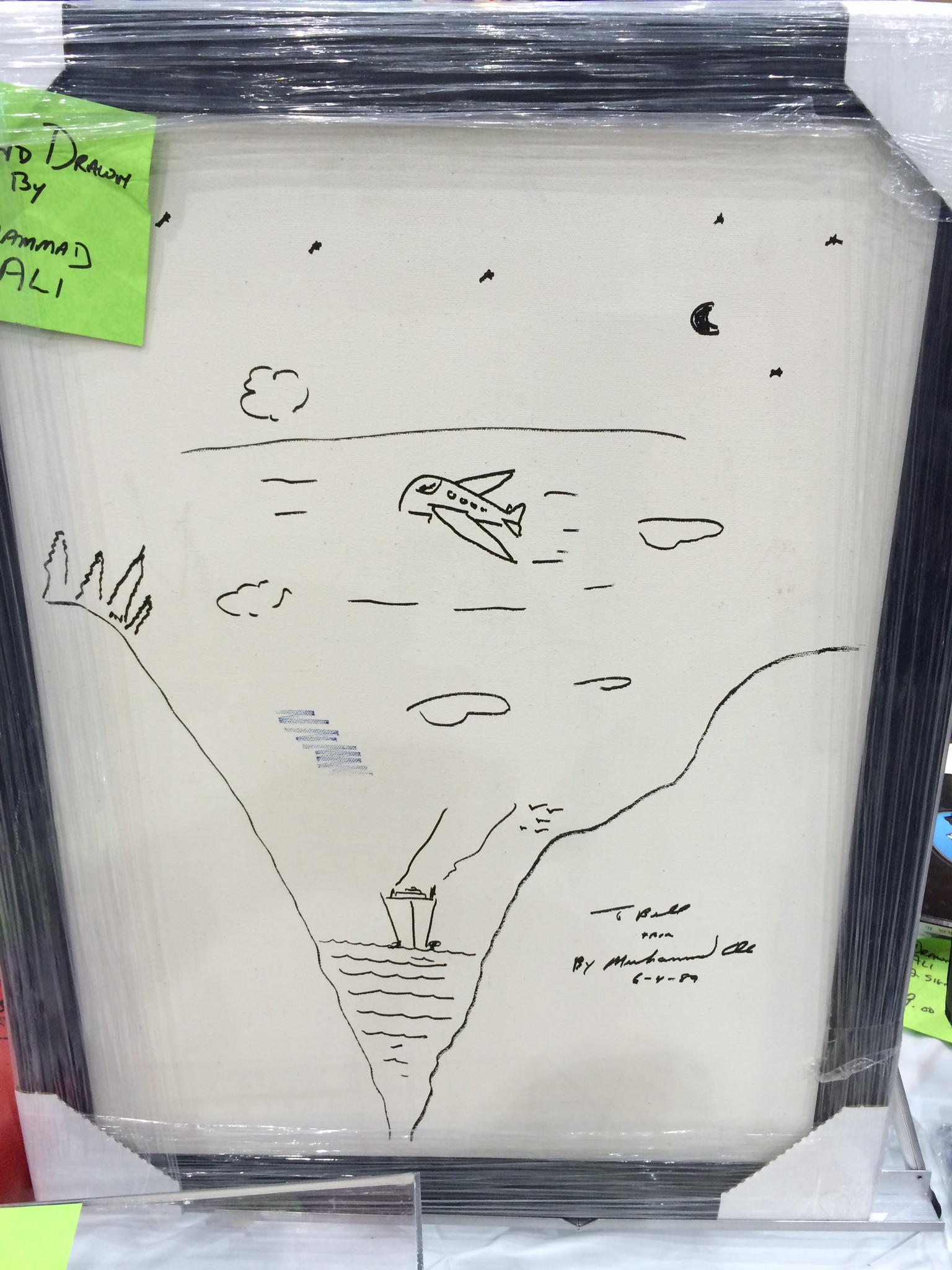 BS: They wanted $1,400 for this Ali painting. We spent far too much time trying to figure out what it was. My guess: It’s a tornado ocean vagina.

RB: It’s the movie Flight meets the movie Titanic. Also, I refuse to believe Ali did this; also, I think I drew this at a TGI Fridays last September. 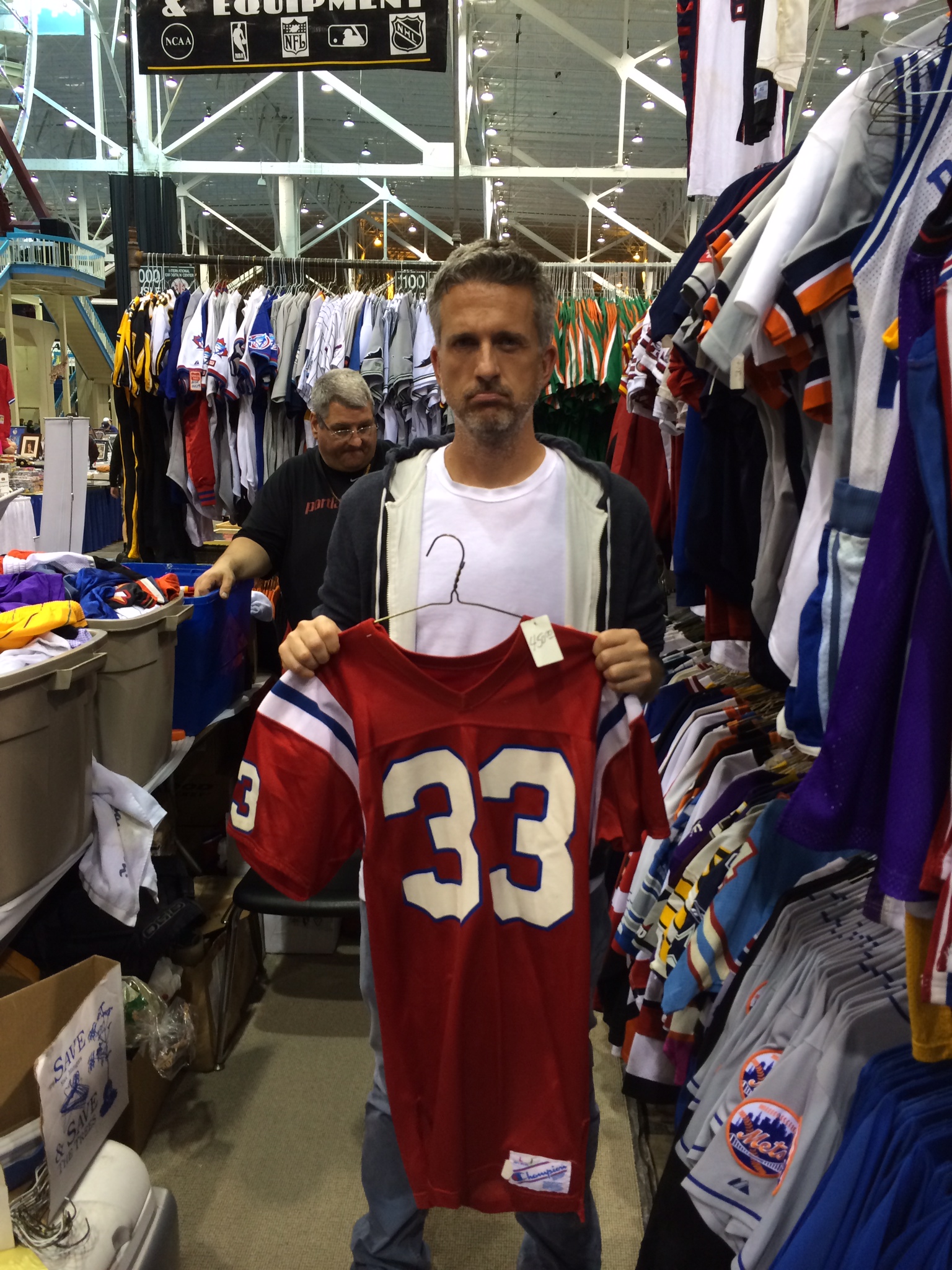 BS: Every summer, I comb through the game-worn jerseys, find this one and get super-excited for 0.23 seconds before remembering that it’s the tiny scab Pats jersey from 1987. Stop taunting me, collectors convention.

RB: I also had a dream that House ate this jersey. But he did it out of friendship, so you wouldn’t have to see it at the collectors convention ever again. 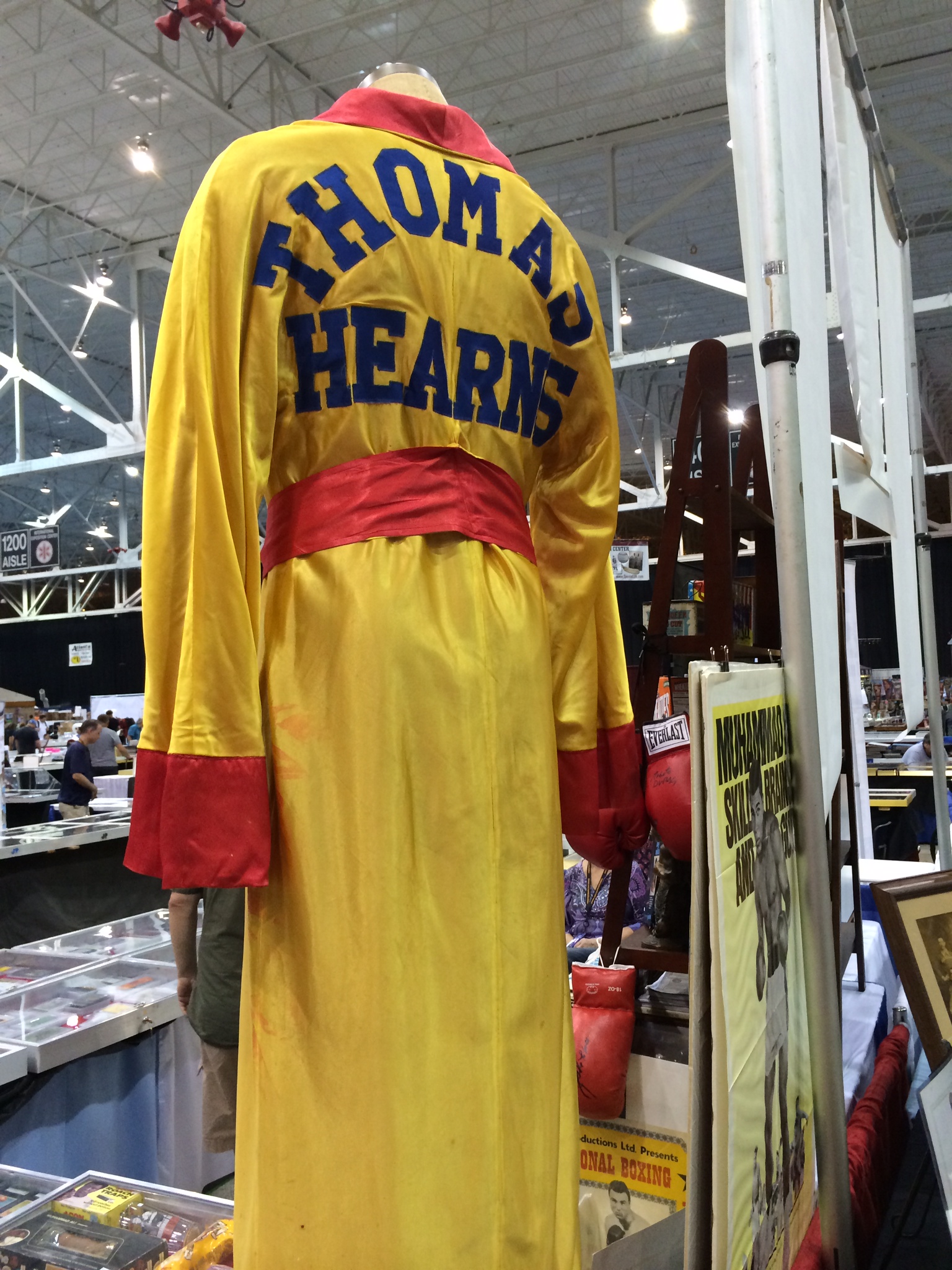 BS: Only 15 grand! Can’t decide if that’s too high or too low. We should have brought Jalen — I am 97.5 percent sure he would have bought this, then done every subsequent podcast holding a bat while wearing the Hitman’s robe.

RB: You forgot about the best part: “Thomas.”