A Visit to the 2014 National Sports Collectors Convention, Part 5

THINGS WE ACTUALLY BOUGHT FOR OURSELVES 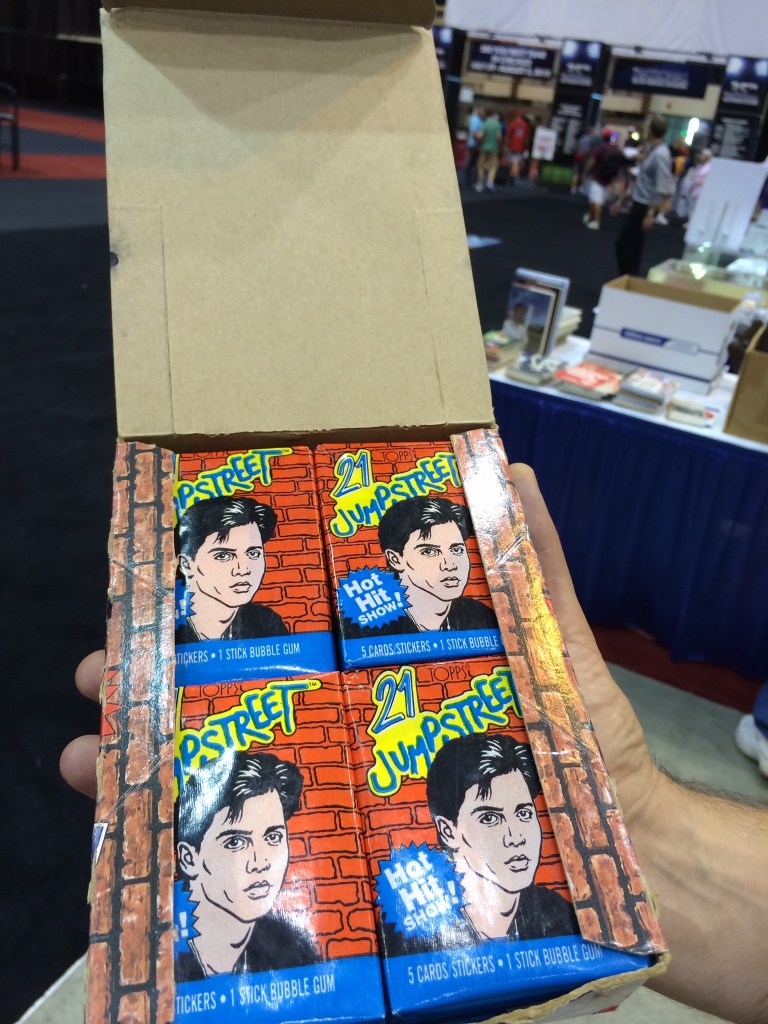 RB: Just when you think you’ve seen David Jacoby at his giddiest, he stumbles on a 21 Jump Street box and hugs it tight and vows to never let go, all with the Kool-Aidiest of smiles.

BS: After Rem took down a Family Matters box and Jacoby grabbed this 21 Jump Street box, I felt inadequate about my ability to find the right purchase of a box of cards from a ridiculous 1990s TV show … and then … well … 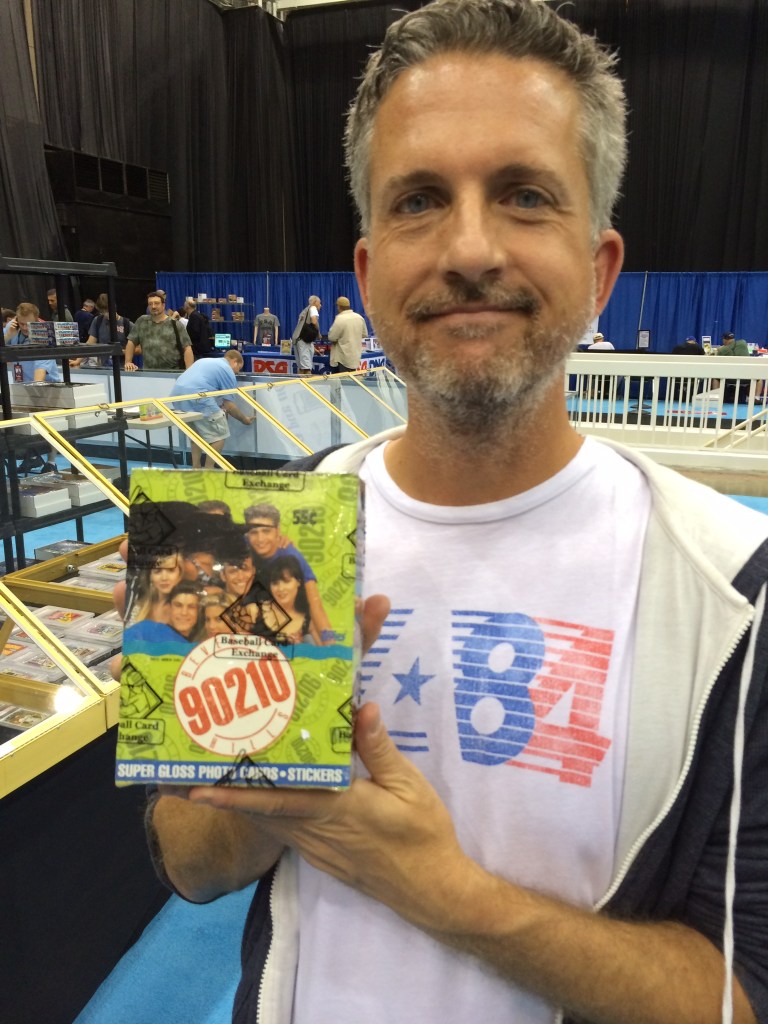 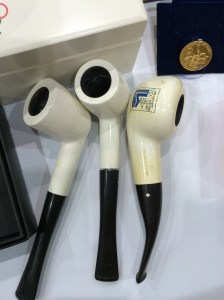 BS: Rem bought one and I bought one. I can’t wait to bring these to Colorado or Washington.

RB: I don’t know what he speaks of; never even heard of those two progressive states. 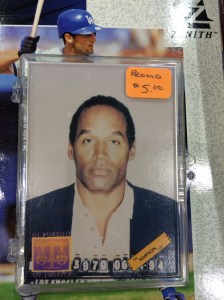 RB: Should have been a five-dollar admission fee just to look at them.

BS: It’s impossible to explain how crazy these were, so here’s a little video of us flipping through them. Yes, there’s a Ron Goldman rookie AND a Nicole Brown Simpson rookie in here. 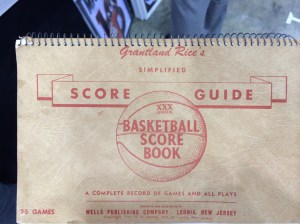 BS: We’ve come a long way from this era to the John Hollinger–Tom Haberstroh–Kirk Goldsberry era. 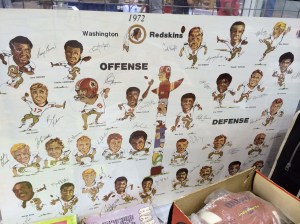 BS: We bullied House (again, a lifelong fan of the Washington Professional Football Team) into turning his son into his own personal Collecting Beard by buying this poster for his room. I actually screamed the words, “If they made this for the 1972 Patriots, I wouldn’t even hesitate for a second, much less act like such a freaking wuss about it! What are you waiting for????”

RB: College hazing really has nothing on collectors convention hazing.

BS: The collectors convention — where you can openly challenge your friends’ manhood at any given time and it’s totally OK. 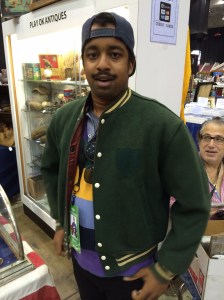 BS: I thought Rem’s convention experience peaked when he bought this vintage Dartmouth jacket for a scant sixty bucks. Even said the words, “I don’t think I have ever seen Rem happier.” But nope, it didn’t peak then. 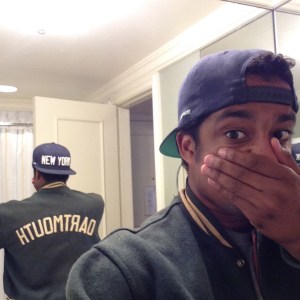 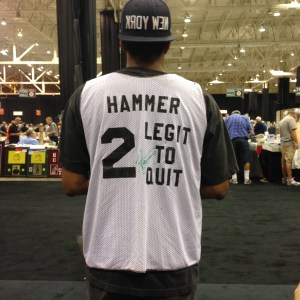 BS: Because later, we saw this game-worn (and signed) MC Hammer jersey from a Deion Sanders celebrity softball game. An overwhelmed Rem called it “the most Atlanta-y thing ever.”

RB: If you ever want to see this jersey, just find me. Because I will always be wearing it. Forever. Amen.

AND FINALLY, THE UNINTENTIONAL COMEDY AWARDS 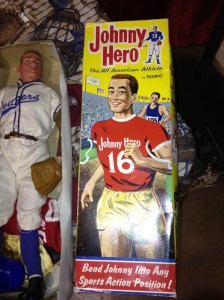 RB: Johnny Hero, such a cautionary tale for Johnny Football, especially considering the rise and fall of Johnny Hero (so sad).

BS: “Bend Johnny into any sports action position.” Um … is it OK if I pass on that offer? 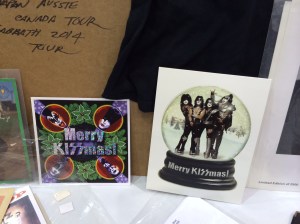 RB: I want a real snow globe with Kiss inside. That’s now the only thing I want.

BS: I don’t know if “Merry Kissmas” is the worst band-related pun of all time, but let’s agree that it’s definitely in the top five. Although, to be clear, I DID almost buy both of these. 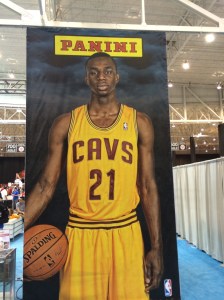 BS: “Hey, everyone … I know I’m getting traded in about three weeks, but, um … can we pretend that this situation isn’t phenomenally and historically awkward, and just concentrate on some of Panini’s wonderful products, please?”

RB: That’s the look on my face whenever I have to pose for pictures and I don’t want to and I’m hungry and I want a panini but then I find out I’m pushing trading cards and not grilled sandwiches. 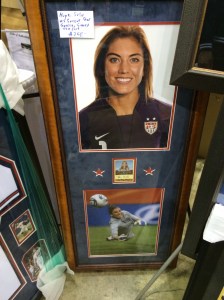 RB: Another reason why collectors should occasionally read the news.

BS: I don’t know what to say other than we noticed this, we all laughed, and then we saw the price ($250!!!!) and had a second round of laughs. Thanks for everything, Hope Solo. Now please don’t get mad at us. 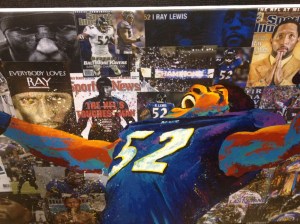 BS: Thought about buying this, then adding a set of deer antlers spraying liquid into Ray’s wide-open mouth. 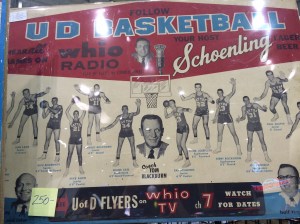 BS: Please, take a long look at the hilariously staged positions for each player on the 1958-59 Dayton Flyers, then ask yourself why Nike doesn’t make a retro poster of its current NBA stars emulating these same positions. Because there’s no good answer. There really isn’t.

RB: Instructions from director: “Hey, everyone, three … two … one … ACT LIKE YOU’RE HAILING A CAB BUT ARE ALSO A LITTLE SCARED OF THE BIG CITY.” 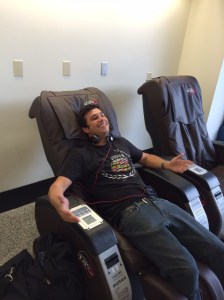 BS: That’s Harlan, one of our talented Grantland dudes from the audio/video side. He left the convention a little earlier than us on Thursday to fly to Los Angeles; we were flying to Boston, so we said good-bye to him at the convention. Or so we thought. Because, two hours later, we were walking through the Cleveland airport toward our gate and saw Harlan, with his eyes closed and his headphones on, getting a massage from a disgusting airport massage chair. This was the single funniest thing that’s happened to me in 2014. God bless the collectors convention. 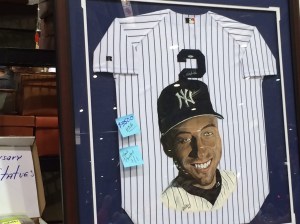 BS: That’s right, just $3,500 for a framed Jeter jersey that includes a bizarre drawing of Jeter wearing Matt Dillon’s fake chompers from There’s Something About Mary.

RB: It’s like the artist did the Deter Jeter hat tip, pulled the brim over his or her eyes, and then started painting Derek Jeter. 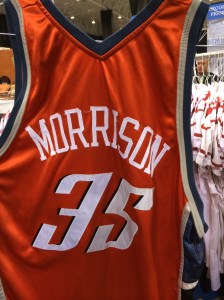 BS: Why didn’t one of us buy this Adam Morrison game-worn Bobcats jersey? I don’t have a good answer for you. I really don’t. No comment.

RB: Inexcusable, especially since I could always use an extra tarp whenever I go camping. 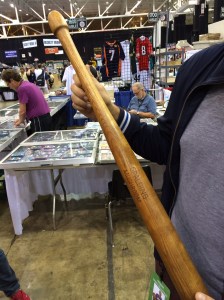 BS: Here is 2014’s winner of the coveted Mantle-Berra Yoo-Hoo Award, given annually to the inadvertently funniest collectors convention item that made us laugh like Beavis and Butt-Head for more than 10 seconds.

RB: I’m still laughing, because I accidentally typed out “Old Baseball Penis That Looked Like a Bat.” That’s funny to me.

BS: I’d like to thank this bat for inspiring me to Google the words “old-school circumcised wooden baseball bat.” Nothing came up. But that’s about to change. Until 2015!!!!