Zurich Is Stained: FIFA and the Sports Crime of the Century 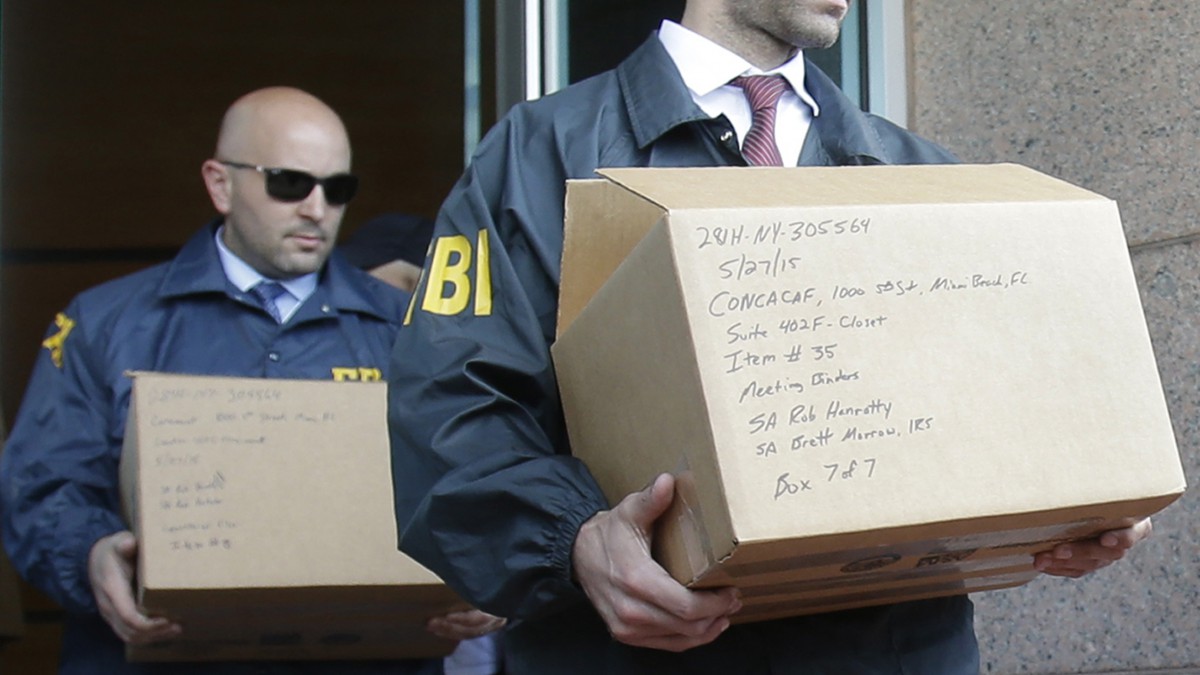 “The cheaper the crook, the gaudier the patter.”
—Sam Spade, The Maltese Falcon

It’s impossible to overstate the historic nature of what happened last week in Zurich and New York. It is unprecedented in the history of organized sports. What is alleged is that an entire international sport was organized and operated as a criminal conspiracy. This isn’t the Black Sox. This isn’t tennis players throwing matches or basketball players shaving points. This isn’t one owner fudging his taxes, or one team being connected to a drug cartel. It is incorrect to refer to FIFA as being “fraught” with corruption or “riddled” with crime. FIFA is itself a corrupt act. FIFA is itself the crime. This is a staggering revelation.

And what we also have learned is that FIFA’s corruption wasn’t in the least covert. It was lying out there, like a mackerel in the sun, waiting until it stank up the world. Take, for example, the case of Chuck Blazer, the huge man with the huge beard and, apparently, a huge appetite for other people’s money, who has turned government witness. Or take his Brazilian counterpart, Jose Hawilla, who paid back $151 million as part of his plea bargain — which doesn’t sound like much of a bargain, now that I think about it. Or Blazer’s running buddy, Jack Warner, who responded to his own arrest by citing a story in The Onion. And, of course, just as the five-ton dung-hammer came down last week, FIFA reelected Sepp Blatter to another term as president. These were successful thieves, but not sophisticated ones.

So much of our corruption is in plain sight these days. The events of the last decade lead invariably to the conclusion that in every booth on the midway every wheel is conspicuously rigged. For example, in the wake of the raids in New York and Zurich, several banks in the United Kingdom began reviews to see if they’d been used to put FIFA’s dirty money through the spin cycle. One of those banks was HSBC. In 2012, HSBC paid almost $2 billion to settle charges that it had laundered money for a number of international criminal enterprises. While the alleged crimes of FIFA are unprecedented in the context of the sports-entertainment industry, they are sadly typical of the way that international systems of corporate commerce and high finance operate.

Which opens up another uncomfortable truth revealed by the FIFA indictments. There are very respectable accessories to the crime. The Clinton Foundation, for example, took contributions from FIFA.1 Anyone who did business with this gang — and, especially, anyone who continues to do business with FIFA — must surely realize that they are complicit in the actions of that body. There is a kind of universal string theory of elite corruption out there now. Hands in a circle, all around the world, and all the palms are greased.

Qatar, of course, represents a wide, clear window into the criminal depravity spawned by the corruption of soccer’s governing body and its corporate partners. Reports insist that the bidding process was crooked, which should come as a surprise to absolutely nobody at this point. But what has ensued since Qatar’s bid was accepted should, as the late Molly Ivins once put it, be enough to gag a maggot. Migrant laborers are held in virtual slavery to build the new venues in the tiny petro-state. One labor watchdog group estimates that 4,000 of these workers will die before all the stadia are built. Any sponsor associated with FIFA is engaging in accessorial conduct in regard to any of those deaths.

I’m particularly interested in this aspect of the blossoming FIFA scandal because I was there at the beginning of the long slow-dance that Qatar has done with international soccer. In 1993, when the World Cup finals would be contested in the United States the following year, I went to Doha for that year’s Asian Zone qualifying. I was drawn there by the fact that the contesting teams were Saudi Arabia, Japan, North and South Korea, Iran, and Iraq. This was quite a field. Every member of it had, at some point in the previous 60 years, invaded, occupied, or otherwise made war upon at least one other member. What I got was 13 of the strangest days of my life.2

It wasn’t just the heat, which was ludicrous. The best jobs belonged to the Americans, who rotated in and out of the country to work the oil fields, and for whom the Qataris arranged convenient loopholes in the country’s fundamentalist prohibition against alcohol. For example, upon checking in, every Western guest was given a “library card,” the library in this case being the hotel bar, which usually had a guy at the door with a guest book and an automatic weapon. The bartender was a Filipino kid who loved Michael Jordan and Guns N’ Roses, and who hadn’t seen his passport since his boss took it away from him two years earlier. What permeated everything was a feeling that we were spending time in a society that had a nasty aspect of oligarchic parasitism to it.

So, when I heard that Qatar had been awarded the 2022 World Cup, I was not surprised that the bidding had an aroma to it. And, as the horror stories began to roll in about migrant workers collapsing in the 110-degree heat, I was even less surprised. But, given the nature of what I saw in Qatar, and the nature of FIFA itself, I’d say that the latter had chosen wisely. After all, Qatar is what FIFA would be if it were a country, and not simply an organization that buys them wholesale.

There is no telling where this all will lead. The other organizing bodies of soccer are running for cover. The attorney general of the United States seems very serious about this case, and her federal prosecutors are so enthusiastic that they were cracking jokes at the press conference at which the indictments were announced. Angry provincials are rising in protest. But, significantly, the corporate partners are tippy-toeing around the swamp. Recent history tells us that expecting a strong stand on ethical behavior — which, in this case, would mean a strong stand against slave labor — is not something most major corporations remember how to do. For several decades, the same grab-it-all frenzy that overcame FIFA was encouraged in almost every aspect of the world economy and cheered on by many of the people who were on the business end of it when the whole thing came crashing down. All of the institutions that run our major sports were no exceptions to this rule. FIFA was only the most garish example. Nobody thinks they’re doing anything wrong as the whole world turns into Doha, and the whole world goes up for sale.