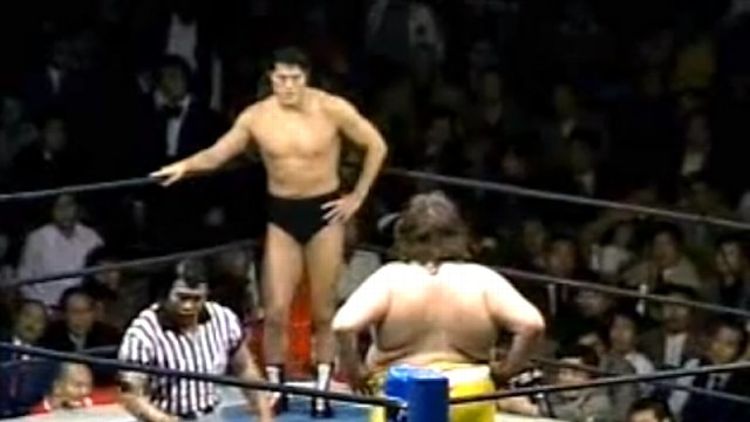 It’s December 8, 1977, at Tokyo’s Sumo Hall. There are 9,000 fans in attendance, all on the verge of being either wildly disappointed or thoroughly enthralled.

In one corner, in the black trunks, stands Antonio Inoki, living legend of the Japanese squared circle — a student of Rikidozan, an international superstar, the founder of New Japan Pro Wrestling, and one of the progenitors of “strong style” wrestling, which helped birth modern MMA. And in the other corner, sporting yellow hillbilly pants and a Bruce Vilanch–style mane, is the Great Antonio, a French Canadian strongman and certifiable crazy person. You put a man with legendary pride and legitimate shooting skills in the ring against a man with a questionable grasp on reality — then throw in a language barrier for good measure — and something insane is going to happen.

And boy does it.

What we have here is pretty standard fare for Japanese wrestling — heroic legend takes on Western monstrosity. Most of the time those monsters were capable in-ring performers, but that wasn’t the case on this night. The hero, Inoki, is so legendary as to be sui generis, but he may be better known to American fans as the guy who wrestled Tony Curtis in The Bad News Bears Go to Japan. Or as the guy who fought Muhammad Ali in 1976 in a legendarily painful wrestler-vs.-boxer match, which, in a way, was a great shoot in its own right, except that it was presumed in many quarters to be real. The reality, of course, is a bit hazier. Ali’s camp presumed it to be fake, but after seeing Inoki fight they realized their version of fake didn’t mesh with his, so they demanded a slew of last-second rule changes. This perturbed Inoki, who ended up spending nearly the entire match slithering on the mat out of Ali’s reach and kicking his legs. For most fans, it was a new level of boring. For Ali, it may have been career-altering; Inoki’s kicks caused a leg infection that would hamper Ali in his fights against Ken Norton. (As Bob Arum put it, “Finally at the end of the 15th round, the referee calls it a draw. So fine, okay. It was terrible, it was embarrassing. But Ali is bleeding from the legs. He gets an infection in his legs; almost has to have an amputation. Not only the Norton fight would’ve been not happening, but Ali could’ve been a cripple for the rest of his life.”)

But Inoki is much, much more than that odd night. Alongside his onetime partner (and fellow Rikidozan disciple) Giant Baba, he is one of the greatest stars in Japanese wrestling history. Both men are sort of Hulk Hogan and Vince McMahon rolled into one. Inoki’s legend is such that “grapplers actually request to be slapped in the face by the man in hopes of receiving some of his courage.”

I think it’s safe to say that back in December 1977, that was not the Great Antonio’s goal.

Antonio Barichievich was born in Europe and moved to Canada after World War II. He was 6-foot-4 and usually about 450 pounds. He was illiterate. He boasted the sort of mythology that only guys like The French Angel and Andre the Giant usually get — stories of his feats and his oddity go hand in hand. He pulled a 400-ton locomotive 20 meters! He ate 25 chickens in a sitting! He pulled four buses, one connected to the next! He had the world’s biggest rocking chair! He made himself famous by hijacking a bus full of passengers just to prove he could pull it. Oh, and here’s a photo of him lifting an enormous tree trunk with 13 people hanging off of it. (Weirdly, nobody mentions that.)

When Antonio started wrestling he wasn’t initially accepted by Canadian promoters, so he started promoting his own shows, often showcasing himself in battle royal main events. That got him the attention he desired, and soon bigwigs like Stu Hart were booking him at the top of their cards.

It was no surprise when Japanese promoters came calling for the Great Antonio. They place a premium on gaijin giants, and he fit the mold perfectly — except that he was in his 40s and he was a pretty terrible wrestler. In North America, where showmanship was becoming more important than wrestling ability, Antonio could pass, but in Japan — especially in Inoki’s world, which was influenced by the “legit” wrestling style he learned under Karl “God of Wrestling” Gotch — he couldn’t hack it.

Shoot matches are often confusing sights. When one performer decides to go off-script, no one — not even his partner in the ring — knows exactly what’s going on, which almost never happens in the choreographed world of wrestling. But Inoki shooting on the Great Antonio is as easy to understand as they come. Watching the video, it’s as if they’re beaming their awkwardness all the way to the back row as the situation evolves. As Boston Celtics broadcaster and hard-core wrestling fan Sean Grande once mentioned to me, this match is “a visceral demonstration of both a match deteriorating into a shoot and what life was like before Soloflex.” This is the platonic ideal of an in-ring clusterfuck.

Things are relatively normal at the start, except for the uncomfortable staredown at 1:30 and the fact that the Great Antonio’s shtick resembles a chubby 8-year-old impersonating Godzilla. The commentary serves as an almost wry prelude to what’s about to transpire: “Inoki said Great Antonio is weak under the pressure!” “Nothing will work no matter where Inoki hits except Great Antonio’s face. Great Antonio’s gut looks loose and fat, but punching his body is just like punching a big piece of raw rubber wall.” They basically apologize for Antonio’s lack of technique: “Great Antonio seems to be headlocking Inoki without effort, but it is much stronger than you would think.”

The match goes through the normal motions for a few minutes — Inoki is resolute but cautious in the face of this terror, who is scary but unrefined. There are a few seeming miscues, but that could be any number of things. Things only really start to break down at the three-minute mark, when Inoki launches a dropkick and the Great Antonio doesn’t even bother to no-sell it. Instead of flexing and demonstrating his power in shrugging off the dropkick, he just stands there like it never happened. (Which, you know, it didn’t, if you want to get real about it.) It’s possible that this was planned, that Antonio was supposed to look like an indestructible monster, but Inoki reacts with subtle displeasure.

Before long everything falls apart. At 4:30, Antonio starts forearm-clubbing Inoki in the back, except he’s sloppy — his forearms become elbows and he misses his target in favor of Inoki’s neck. This is the sort of thing that typically sets off old-school wrestlers — a dance partner whose poor technique borders on dangerous. As soon as Inoki comes up from the neck shot, he’s on offense — and not the regular, scripted kind of offense. He starts striking Antonio in the face. Antonio immediately turns around to shield himself. Inoki executes a single-leg takedown — perfect Gotch form — and starts unmercifully unloading with kicks. The announcers play along as if everything is normal: “Inoki is kicking Great Antonio’s face — it seems like big damage to the Great Antonio. He just hit Great Antonio’s chin, the left kick just hit bones around the stomach. Great Antonio’s mouth is ripped and bleeding! Inoki’s stomping broke Antonio’s ear! Great Antonio cannot wake up! He has no energy left. Inoki’s upper kick to Antonio’s chin seemed like the critical hit — his face is now covered with his blood.” (Thanks to Kenji Nakayama for the translation.)

And that was true — by the end of the attack, the Great Antonio was unconscious, and when he came to, he was bloodied and punch-drunk. His manager came in under the pretense that he was objecting to the attack, but really he was keeping his ward down on the ground to make sure he didn’t get into more trouble.

By the time Inoki raises his victory trophy to the sky, the violence is over and another gaijin behemoth has been dispatched — albeit for real this time.

According to Bruno Sammartino, Inoki shot on him during a tag match in the 1970s, but Sammartino rebuffed his attempt and tossed him out of the ring. While nobody doubts Sammartino’s toughness, this story seems like part of another trope — that of North American toughmen being sneak attacked by nefarious Japanese wrestlers and valiantly overcoming the odds. (Killer Kowalski and Ox Baker have made similar claims.) Regardless, Inoki’s path to immortality in Japan continued unabated. He was elected to Japan’s House of Councillors in 1989 and met with foreign dignitaries like Saddam Hussein and Fidel Castro. His retirement match supposedly drew more than 70,000 fans to the Tokyo Dome. He currently lives in New York. He converted to Islam in 1990 and recently changed his name to Muhammad Hussain Inoki.

In his memoir, Butcher Vachon wrote that the Great Antonio once went to Japan to wrestle Rikidozan, but he refused to lose. (Vachon claims that Antonio was beaten up by thugs on his way home, which, considering the Yakuza’s long-standing affiliation with Japanese wrestling, is feasible.) You can see the match they had below, and be sure to watch the hilarious promotional clip. It shows Antonio doing feats of strength to the delight of Japanese onlookers, and it’s longer than the match itself. If this is as real as it looks, it’s an overlooked shoot in its own right — rather than have a real match, Rikidozan just smacks Antonio in the head, tosses him onto the floor, and the bout is called off. It’s an odd premonition of the Inoki match. You can even see Inoki aping Rikidozan’s offense when his own match goes off the rails. One is left wondering whether Inoki wasn’t just taking on a monster that his mentor had faced, but whether he was deliberately reenacting the real-life beatdown from 16 years before. It’s like LeBron wearing no. 23. Or like Star Wars rewriting classical mythology.

The Great Antonio never wrestled another match. He died in 2003, when he was 77, in a grocery store. In his later years the Great Antonio could sometimes be found in a Montreal subway station or a city park or a Dunkin’ Donuts (he was known to receive messages there). He’d be selling photos of himself or brochures about his life or pencils. He claimed to be part extraterrestrial. He was named the “Best Montreal weirdo” by the Montreal Mirror in 2002. In his book Scorned & Beloved, Canadian writer Bill Richardson wrote of a diminished, late-life Antonio: “He worked hard with what he had, with strength, nerve, and more than a little gall.”

Which is great, but sometimes gall gets you kicked in the face.

Next: The Kiss of the Spider Woman