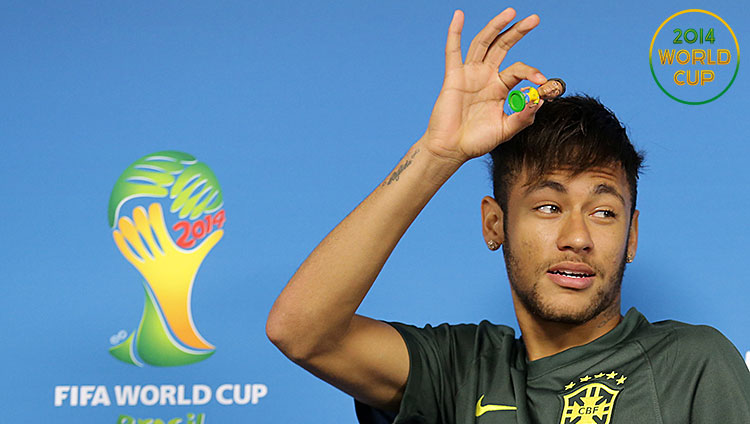 You go to the World Cup to win the World Cup. And 32 teams have arrived in Brazil this week to do just that. (Yes, even the United States.) Obviously, only one team can win, and that team is probably Brazil.

There’s something else players get out of the World Cup, though. As much as it’s a competition to win a gold trophy, the tournament has really become the most-watched shop window on the planet. For one month, virtually the entire soccer world stops and watches the same matches at the same time, producing meteoric rises in the fame and transfer values of the tournament’s most successful players. Naturally, some World Cup–driven moves are more successful (Mesut Ozil to Real Madrid in 2010) than others (El Hadji Diouf to Liverpool in 2002), but it’s difficult to deny the tournament’s ability to give talent the stage it deserves.

In thinking about the overstuffed transfer gossip columns to come, I started wondering about where each team was positioned in terms of player value before this World Cup kicks off. Sure, I have a good idea that the Brazilian national team is worth more than the Algerian side, but is France worth more than Italy? Spain more than Germany? And how will that change after the Cup is awarded in the Maracanã on July 13?

I can’t answer that last question until the tournament’s over, but let’s see where each team stands as we approach kickoff. To calculate team values, I took the player database I used in the Youngest World Cup Players piece from last week and updated it for new injuries (sorry, Franck Ribéry). To determine the current market value of each player, I used the figures generated by Transfermarkt and assigned them to each individual. The figures are admittedly arbitrary, but I have no obvious reason to think that they’re biased, and they certainly seem to resemble reality. As with any murkily defined measure of performance like this, take these numbers with a grain of salt. These figures were listed on Transfermarkt’s U.K. site in English pounds; I’ve converted them to U.S. dollars at the rate of £1 = $1.68.

Here are the cumulative and average player values for each of the 23-man squads in this World Cup:

Three things stand out from that table:

Wow, Spain. I’m a little surprised that Spain tops the charts. Sure, it’s coming off the most impressive six-year run by a national team in the modern era after sandwiching a World Cup win in 2010 with European championships in 2008 and 2012, but the core of those teams is aging to the point where the player value isn’t what it once was. Transfermarkt values players like David Villa and Xavi, who would have been worth in excess of $50 million at their peak, in the sub–$15 million range now.

There’s still enough of a core, though, to keep Spain atop the rankings. Andrés Iniesta, who turned 30 in May, comes in as Spain’s most valuable player at $81.3 million. Players like Cesc Fàbregas (with a market value of $73.9 million, even if Barcelona don’t have the leverage to sell him at that price anymore), Sergio Busquets ($66.5 million), and Juan Mata ($59.1 million, a bit below the $66.1 million David Moyes paid for him during his ill-fated year at Manchester United) are still in their mid-twenties with much to say about defending Spain’s title.

With that being said, it’s still hard to imagine that the Spanish national team is more than twice as valuable as the Portuguese side. But hey, remember that grain of salt!

Belgium isn’t to be messed with. Belgium is the most fascinating team in the tournament to me; as Sam Knight did a wonderful job of documenting for Grantland last month, this is a side that includes arguably the best defender (Vincent Kompany — probably not last year because of injuries, but chill) and attacking midfielder (Eden Hazard) in the Premier League, one of two strikers to score 15 goals in each of the last two Premier League seasons (Romelu Lukaku), the best keeper from last year’s Champions League (Thibaut Courtois), a $55 million midfielder (Axel Witsel), and, um, Marouane Fellaini! Well, the first five were good. In all seriousness, Belgium can roll out one of the most impressive starting 11s in this entire tournament, even as the tournament’s third-youngest 23-man side.

Its overall transfer value puts that in context. Belgium’s a minnow in terms of recent international performance, having failed to reach a major tournament since the 2002 World Cup, but this is a team with talent capable of competing at the highest level. It’s still stunning to see them ahead of perennial powers like England, Italy, and the Netherlands. Its youngish nature means its market value overstates its actual talent level in terms of performing at this World Cup, but this is also probably an example of a team underrated by ESPN’s Soccer Power Index, because it has only really broken through in the past few seasons. The market on Intrade has Belgium with the sixth-best chance to win this World Cup, while SPI has the country 10th.

Maybe Jurgen Klinsmann is right. For all the chatter about Klinsmann dropping Landon Donovan for the promise of Julian Green, this isn’t a particularly young United States team, as the U.S. side heading to Brazil is the 12th-oldest of the 32. It’s also not a side teeming with valuable properties. The team’s two most valuable players are Clint Dempsey ($10.3 million) and Michael Bradley ($9.6 million), each of whom have returned to North America over the past 12 months. The third is Jozy Altidore ($8.8 million), who was a disaster this season after Sunderland paid $13 million for him, scoring just once in the Premier League before being supplanted by Connor Wickham and sent to the youth team. Tim Howard is 35. Jermaine Jones is 32. And Transfermarkt doesn’t see younger talents like Green ($840,000) and DeAndre Yedlin ($420,000) as worth much yet. You may disagree, and a few players may emerge as more valuable properties if the U.S. makes it out of the group stage, but this just isn’t a very valuable U.S. team.

As with other sports, the value of players in soccer (here evidenced by transfer fees) doesn’t resemble a normal distribution. Instead, there are a few players worth an enormous premium, a market for above-average talent below them, and then an enormous pool of middling players who aren’t worth much more than the player next to them. (This is why you’ll read about a team in the lower leagues of England letting two-thirds of their players leave on free transfers regularly.) Clubs might not talk about replacement value the same way that baseball teams do, but they get the idea. Lionel Messi couldn’t beat the entire Honduran team in a 1-on-11 match, but if you went into the transfer market, the entire 23-man Honduran team wouldn’t come close to matching Messi’s transfer value.

Messi isn’t alone; Transfermarkt suggests there are 73 players competing in this World Cup who are worth more than the entire Honduran national team, ranging from Messi (worth $177.4 million without considering his abilities as a dance instructor) down to French midfielder Yohan Cabaye (one of four players listed at $32.5 million). It’s actually sort of staggering to see it in context; here are the bottom 16 teams in terms of transfer values at this World Cup, with player values from the top 16 teams mixed in:

Would you trade the entire United States 23-man side for Luis Suárez? Yeah, me too.

OK, so having a valuable 23-man squad is one thing. You can play only 11 men at one time, and much of your team’s value might end up on the bench. Take the United States, for example; its fourth-most valuable player is Aston Villa keeper Brad Guzan ($7.4 million), who is likely to spend the World Cup on the bench as Tim Howard’s understudy. What if we consider team value as a product of starting 11s? I used SB Nation’s projected starting lineups from its World Cup preview. This might be an even better gauge of each team’s relative strength heading into Brazil:

If you’re the type to desperately throw out bias arguments, Transfermarkt is a German site. With that being said, it’s not difficult to imagine a German starting 11 being more valuable than the Spanish starters, especially given their respective ages; the projected German starting 11 has an average age of just 26.2, the fifth-youngest starting 11 in the tournament. Five youngest: Belgium (25.2), South Korea (25.6), Nigeria (25.7), Ghana (26.0), Germany. Five oldest: Ivory Coast (30.4), Portugal (29.3), Honduras (29.2), USA (29.1), Iran (29.1). AT LEAST WE’RE YOUNGER THAN YOU, HONDURAS! Germany has 10 players in its projected starting 11 worth $34 million or more … and Dortmund full-back Erik Durm, listed at $4.4 million.

While there are all kinds of interesting changes here — Argentina moving ahead of Brazil, notably — the broader story doesn’t change. There’s still a big four in the tournament of the two top teams from Europe and South America, and they’re well ahead of the pack in terms of both team value and overall odds of winning the tournament. The Intrade market gives Argentina, Brazil, Germany, and Spain a combined 66.9 percent chance of winning the tournament, with nobody else above 4.1 percent. The Soccer Power Index gives those same four a combined 77 percent shot at victory. There might not be a huge chance for the vast majority of players in this tournament to claim the World Cup trophy of their dreams. Failing that, they might be happy to settle for the transfer of their dreams instead.