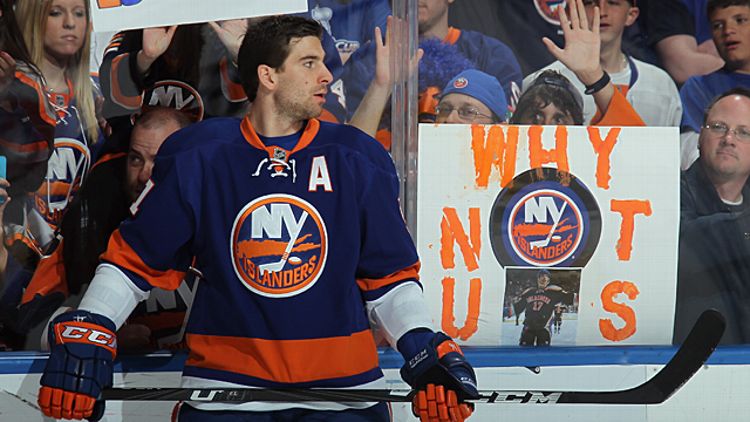 Sunday was a happy/depressing day in the happy/depressing history of the New York Islanders, a franchise that’s set to move to Brooklyn (a happy/depressing borough) in 2015. The Islanders were playing the Penguins in a first-round playoff game at Nassau Coliseum, their first postseason appearance in Uniondale since 2007. I thought I ought to go and make notes on the fan base while it was still in its natural habitat.

Shortly after 10 a.m., about two hours before the opening faceoff, Jason Coyne and his friend Michael Decotis were sipping Jack and Cokes in the parking lot. “I’ve been an Islanders fan since I was 2 years old,” Jason said. “Now, I’m 35.”

Jason was wearing the standard Islanders fan uniform: jersey or T-shirt; jeans or baggy cargo shorts; white sneakers. Jason had his cap on forward, which is something of a deviation. A backward cap is to an Islanders fans what a mask is to Evgeni Nabokov.

The Islanders entered Sunday’s game with the series tied 1-1. The Rangers dropped their first two playoff games against Washington. This fact made Islanders fans happy.

Everyone drives to Islanders games. There is no train stop for Nassau Coliseum. (It’s ironic that the first time an Islanders fan will take the Long Island Rail Road to a hockey game will be when he goes to the Barclays Center in Brooklyn.) The Coliseum sits on a vast parking lot, down the street from Hofstra University and next to a shabby Marriott. The arena is a cement building with white hoses worming out the walls. On Sunday, a “green” area consisted of a jagged tree stump surrounded by dandelions. An Islanders fan pointed to a pot that contained a dead plant and said, “This is what we get for paying $20 to park.”

The Islanders are moving because the Coliseum lacks amenities — right? Well, I go to a lot of stadiums, and I always sit in the stands, and I have yet to use an amenity. Here is an amenity of the Nassau Coliseum: It has no upper deck. Even in Section 324, on the blue line, you can see the whole ice and not feel you’re staring down from the top of the Chrysler Building. Season tickets in that section cost $40 a seat per game, and if you buy two, a third can be had for half price. This confirms my long-held belief that the “worst” stadiums in America are often the best, and the “best” are defined as the ones where you can buy sushi.

“Of course you’d love ’em to stay,” Jason said. “But I want to attract big-time stars that want to play in a big-time arena. Our practice rink is a public skating rink. Okposo was quoted as saying his practice rink at Minnesota was nicer than the Coliseum.” Kyle Okposo, the Islanders’ no. 1 pick in the 2006 draft (seventh overall), was referring to the University of Minnesota.

This is how Islanders fan generally feel about the move to Brooklyn: It sucks for fans but is good for the team. Plus, going to Brooklyn — rather than Kansas City or Quebec, as had been rumored — is as about as painless as a franchise relocation gets. “I learned this in elementary school,” said James. “Brooklyn, Queens, Nassau, and Suffolk — they’re all part of Long Island. They didn’t put dynamite on the border between Queens and Nassau.”

James was allowing a woman to paint an Islanders’ logo onto his recently shaved head. “Will I go to Brooklyn?” he said. “Yeah. It’s easier to travel. You don’t have to deal with the traffic on Hempstead Turnpike and Meadowbrook Parkway.”

I walked over to the Coliseum, where a DJ was yelling, “Who remembers 1980 to 1984?” I had the same question. The team’s incredible early-’80s run (when the Isles won 19 straight playoff series) existed as a dim memory for the backward-capped fans. They remembered cars covered in bumper stickers (“Drive for Five”) or the Stanley Cups they drew in art class or the thick special sections of Newsday.

“I went to all four,” said 61-year-old Don Stuart, who was standing near the Marriott. Don had a sunblasted face, and was taking drags from a cigarette and sipping a can of beer.

Don once owned season tickets in Section 313, right behind the goal. After one game, Don’s seatmate Dennis “Leather Lungs” Klaus — so named because he used to lead a lot of the chants — spotted an untapped beer keg behind a concession stand. Dennis grabbed the keg and began to carry it out of the Coliseum. Don assured a Nassau police sergeant that Dennis, however improbably, had brought the keg himself and was merely reclaiming his property. The cop said, “If Dennis told you he brought it in, he did.” Don and Dennis took the keg to a bar in Massapequa Park and drank it dry.

“The first time they won the championship,” Don said, “I didn’t get home until 6:30 a.m. the following day. And it was an afternoon game, too! I was in Wantagh, and they had to scrape me off a fence.”

Don added, “I hate the Rangers.”

Inside the Coliseum, the Islanders gave their side Bufferific introductions (“Jooooohn Tavares!”) but dispensed with announcing the Penguins’ lineup entirely. Islanders fans were not robbed of their chance to taunt, though. After New York scored two quick goals in the first period, the fans began chanting “CROS-by!” at Sidney Crosby, who had returned to the Penguins lineup Friday after missing more than a month because of a broken jaw. Eventually, the crowd tactically switched to “Fleu-ry!” for Marc-Andre Fleury, the Pittsburgh goaltender. (Crosby wound up with three assists Sunday.)

From the seats, the Coliseum looked old but it didn’t look bad. What it looked was local. There are ads for Dial-a-Bug and National Arbitration and Mediation (the acronym is “NAM”) and something called SportsYapper. Gaze out in the direction of Butch and Howie’s booth and you can see a banner saluting Billy Joel’s nine sold-out shows on his ’98 tour. The ancient scoreboard shows “let’s make noise” cartoons (sponsored by Bob’s Discount Furniture) that Bob Clampett would have rejected back in the ’30s for insufficient realism.

I’d bought a ticket on StubHub, and my seatmates were Rob Meagher, of Huntington, and his sons Trevan and Rocco. Rob told me that my seat was usually empty except for big games: the Flyers, the Devils, and of course the Rangers. (Earlier in the season, Rob said, a Rangers fan had identified himself by fighting security guards and, later, wound up being thrown down the stairs.) Rob had been coming to the Coliseum long enough that he knew to bypass the restroom lines inside for the Porta Potties in the outdoor smoking area. “You can drink a beer, smoke a cigarette, and take a piss, all in a TV timeout,” Rob said. That is what I call an amenity.

Rob had grown up with a father who was a Rangers fan and a mother who was an Islanders fan. He picked the Islanders because of the unnerving quality of Rangers announcer Phil Esposito’s voice. Rob went dormant for a while when the Islanders sucked — a period after the Stanley Cups when they got rid of their team architect, Bill Torrey — but was back because of his kids. A source — not necessarily Rob, because he’s married — told me that Danielle was the best-looking of the Islanders Ice Girls, who skate out during breaks and clean the ice in skimpy outfits. Referring to Danielle’s fitness, my source said, “She’s got a map of Hawaii on her belly.”

Rob elbowed me during the third period and said, “This is a good one.” Islanders fans had remixed the song “If You’re Happy and You Know It” so that it played: “If you know the Rangers suck, clap your hands.”

The crowd was very Long Island, in a good way. After the game, Okposo would say he’d never heard the old barn so loud. (Defenseman Travis Hamonic said he was stunned when he pulled into the parking lot at 9:30 a.m. and saw it full of cars.) The Islanders scored twice in the first six minutes in the first period, then the Penguins tied it with back-to-back power-play goals in 19 seconds. The second period was fairly listless for the home side. Then the Islanders scored twice in the third to make it 4-4, the second goal coming off a nifty shot by Tavares. The closing seconds of regulation were as loud as I’ve ever heard an arena and the most fun I’ve had in one that doesn’t belong to one of my teams.

The Penguins’ Chris Kunitz scored the game-winner 8:44 into overtime. It was on another power play: Islanders coach Jack Capuano later gave a portentous no-comment about the officiating. The Islanders’ crowd instantly powered down, and as everyone filed out back onto Long Island there were a few meaningful “Fucks!”