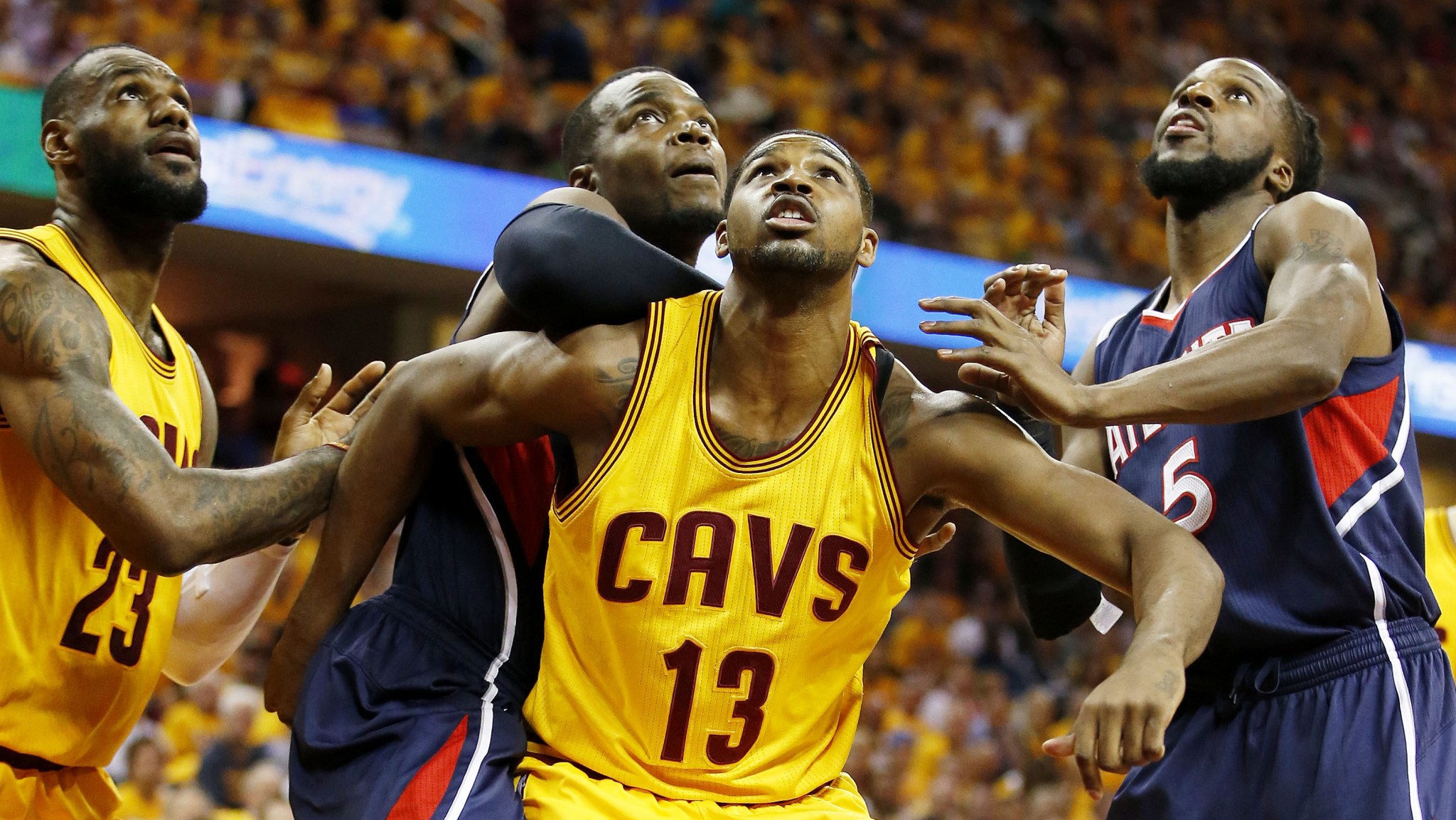 When Festus Ezeli was sitting out in 2013 with a knee injury, Mark Jackson, then the Golden State coach, accused Ezeli of cheering against the team — presumably because the Warriors struggling would prove Ezeli’s value, per several team sources. Ezeli denied it during a tearful talk with teammates, and still denies it today.

Tristan Thompson wants the Cavaliers to succeed, but rooting for some short-term pain may be the only play that Thompson and his agents have left after they refused to sign Cleveland’s one-year, $6.8 million qualifying offer by 11:59 p.m. yesterday. That offer, now expired, gave Thompson leverage. He could have signed it, played the season, and bolted Cleveland as an unrestricted free agent in July. His agent, Rich Paul, explicitly threatened the Cavs with this weeks ago to get them to bump their five-year, $80 million offer up to the maximum five-year, $94 million deal for which Thompson is eligible. In Paul’s scenario, if the Cavs were to balk, Thompson would sign the qualifying offer, ditch the Cavs, and snag a max deal from someone else amid the flood of cap money coming in July.

Thompson and Paul did not go through with their threat. That may be a signal that they understand they overplayed their hand — that there may not be a max-level deal awaiting Thompson. If he re-signs with Cleveland, Thompson will come off the bench behind Timofey Mozgov and Kevin Love — assuming both are healthy. He’d average something like eight points and eight rebounds per game, play energetic defense, and draw some Sixth Man of the Year votes. That probably isn’t getting him a max deal, even amid the upcoming and unprecedented cap-room boom. Power forward is loaded around the league. It’s hard to name even 10 teams on which Thompson would be an obvious starter, and none of them would have LeBron James and Kyrie Irving to draw defenses away from him. Such is life when you have the offensive skill set of a center, but not the size and ability to protect the rim.

The qualifying offer was about $7 million less than Thompson would earn in 2015-16 under Cleveland’s proposed deal. He’d have to make more than $18 million per season starting in 2016-17 to make up for that lost cash, and given how close that $18 million number is to his projected max, it’s not a lock that Thompson would have managed to equal out the money. The Cavs understood this, and held firm.

And so here we are, with Thompson holding out, hoping the Cavs ache so badly without him that they cave. Love is still recovering from shoulder surgery, though he could be ready for opening day. Mozgov is limited after offseason knee surgery. Anderson Varejao is recovering from an Achilles tear, and he’s a center anyway. Sasha Kaun is an unknown at this level. Iman Shumpert is out for three months, which could force Richard Jefferson into playing emergency minutes on the wing instead of as a small-ball power forward.

Paul can plausibly look at all this and say, “You need Tristan to win the title, and you need him right freaking now.” The Cavs won’t have the cap space to sign a big-money replacement for Thompson this summer if he bolts, and they probably never will as long as LeBron, Love, Irving, and key supporting players are in town on huge contracts. They might be able to replace some of Thompson’s production on the cheap, but there is no easy path to an eight-figure salary slot. Cleveland will likely only have small cap exceptions, and those things aren’t buying you a facsimile like Trevor Booker or Ed Davis1 in a climate where teams almost literally have too much cap money.

The Cavs aren’t budging today, but they also aren’t going to use their newfound leverage to squeeze Thompson. They won’t burn that five-year, $80 million deal and low-ball him. Paul also represents LeBron, currently cycling through one-year contracts that whisper over the shoulder of Cavs GM David Griffin every summer: “I can leave if you fail.” Everyone has an incentive to preserve good will, which is why Thompson signing that five-year, $80 million deal — or something right around there — has long been the only outcome that really made any sense.

The two sides are now free to negotiate any kind of deal, including a one-year contract, though the Cavs have no reason to offer that anymore. If Thompson holds out all season, he becomes a restricted free agent all over again. That’s not a good enough outcome for Thompson to punt one full year of salary during his prime.

Thompson’s side floated a three-year, $53 million compromise last week, but that compromise doesn’t do much for the Cavs. It’s essentially a shorter max contract. It would inflict the same short-term tax punishment without the long-term benefit of having Thompson under contract through his prime. The Blazers and Sixers could make things easier on everyone by making an offer the Cavs could match, but neither seems interested in doing so.

The gap between Cleveland’s proposal and Thompson’s max — about $2.5 million next season, and $14 million over five years — matters more than it might appear. That $2.5 million alone would cost Cleveland about $12 million next season in extra tax penalties.2 Dan Gilbert is already spending an insane amount to keep this team together, but that doesn’t mean he should mindlessly add $12 million to the pile just to retain a key reserve — especially when he has some leverage.

The Cavs are not totally without options if Thompson holds out for months. The corpse of Brendan Haywood left behind a $10.5 million trade exception, and the Cavs can trade a future first-rounder that would almost certainly become a 2018 pick.3 That’s enough to start talks for someone like Davis once he becomes trade-eligible on December 15, or even Markieff Morris if he pipes up again. Sources around the league say Channing Frye is available now for very little, though Magic officials deny it. Other names will hit the market, but while the salary of someone like Kenneth Faried doesn’t quite fit the exception, how much would Denver really demand to dump J.J. Hickson into it?

Thompson on a five-year, $80 million deal might be movable as the cap rises. Thompson at the max is tougher to trade. Mozgov is an unrestricted free agent after this season, and he’s going to cost a ton — perhaps up to the max. Mozgov revived the Cavs last season, and he’s a perfect front-court partner for the LeBron-Love star tandem — a legit center who can screen for LeBron while Love spaces the floor and works the elbows, destroy the boards, and barricade the rim on defense. Thompson can do the first two of those things, and he showed flashes of explosive rim protection in the playoffs when he played at peak effort; the Cavs outscored opponents by a ridiculous 15 points per 100 possessions when LeBron, Love, and Thompson shared the floor last season. Thompson isn’t a great pick-and-roll finisher, but he’s fast, and he sucks in defenders just by scooting down the lane; Cleveland scored at a very high rate on possessions that included Thompson screening for either LeBron or Irving, per SportVU data provided to Grantland.

But Thompson and Mozgov are third wheels in those trios, and no reasonable team would pay near-max money for two third wheels who shouldn’t play much together. They did out of necessity after Love’s injury in the playoffs, and the Cavs got within two wins of the title. But the limitations of the Mozgov-Thompson duo forced LeBron into an unsustainable bulldozing mode that exhausted him. Cleveland doesn’t want to choose between the two, but if Thompson’s price gets high enough, the Cavs might have to.

None of this is to denigrate Thompson’s game, or his role in Cleveland’s run to the Finals. He was sensational. He embarrassed Paul Millsap and Pau Gasol on the glass, showed an improved touch on putbacks, and stifled Jeff Teague, Derrick Rose, and other perimeter players on switches. The Cavs can smother your preferred pick-and-roll combination in crunch time by slotting LeBron on the ball handler and Thompson on the screener, and switching at will.

Opponents have to think twice about doing that to the LeBron-Thompson combination on the other end, even if they have a big who can hang with LeBron; leaving a smaller guy on Thompson is a recipe for death on the glass. He’s such a dangerous offensive rebounder that opponents in the playoffs started putting their best box-out guy on Thompson, even if it left an overmatched forward to check Mozgov. Teams send extra bodies to the defensive glass to protect against Thompson, neutering their transition attacks. Thompson is the rare offensive rebounder so deadly that he changes game plans. The mere threat of his glass-eating creates trickle-down effects that are sometimes hard to see.

He’s just a tough piece to fit in a league where having at least one big man who can shoot at all times is almost a necessity. Millsap can play with anyone; Thompson can’t. He’s a complete non-shooter, and he hasn’t learned to compensate by tossing quick-hitting interior dishes through the tiny slivers that open when he rolls to the basket. He just doesn’t read the floor fast enough. He likes to pause, gather the ball, bring it below his waist, and prime for the next move as help defenders swipe at him.

Thompson is not an especially explosive above-the-rim finisher. He needs time to load up for jumps, and defenders use that window to rotate over and swat him. That’s not ideal for a garbage man, and Thompson on offense is basically that — a bouncy mooch. He’s in the perfect spot to play that role. LeBron and Irving draw help defenders almost every time they dribble, freeing Thompson to cut into open space and gobble up offensive rebounds when those guys miss. A lot of his offensive boards come when he screens for James, rumbles down the lane with defenders behind him, and waits to see if LeBron misses.

His ability to switch on defense will become more important as the league gets smaller, faster, and more pass-happy, but he’s not quite an All-Defense-level player. He suffers half-second blips of confusion off the ball as the rotations fly fast and furiously, and his help at the rim has been inconsistent.

Thompson’s a nice player, but the Cavs are playing the market well in betting that their five-year, $80 million offer might be as good as it gets for him. And Paul is justified in using Cleveland’s semi-urgent health situation against it. This is a tricky situation, but Cleveland has a bit more leverage today than it had yesterday, and it just seems like an easy and fair compromise has been staring both sides in the face for months. Cleveland has offered a fair deal, and it’s uncertain if Thompson can do any better on the open market — if he ever gets there.