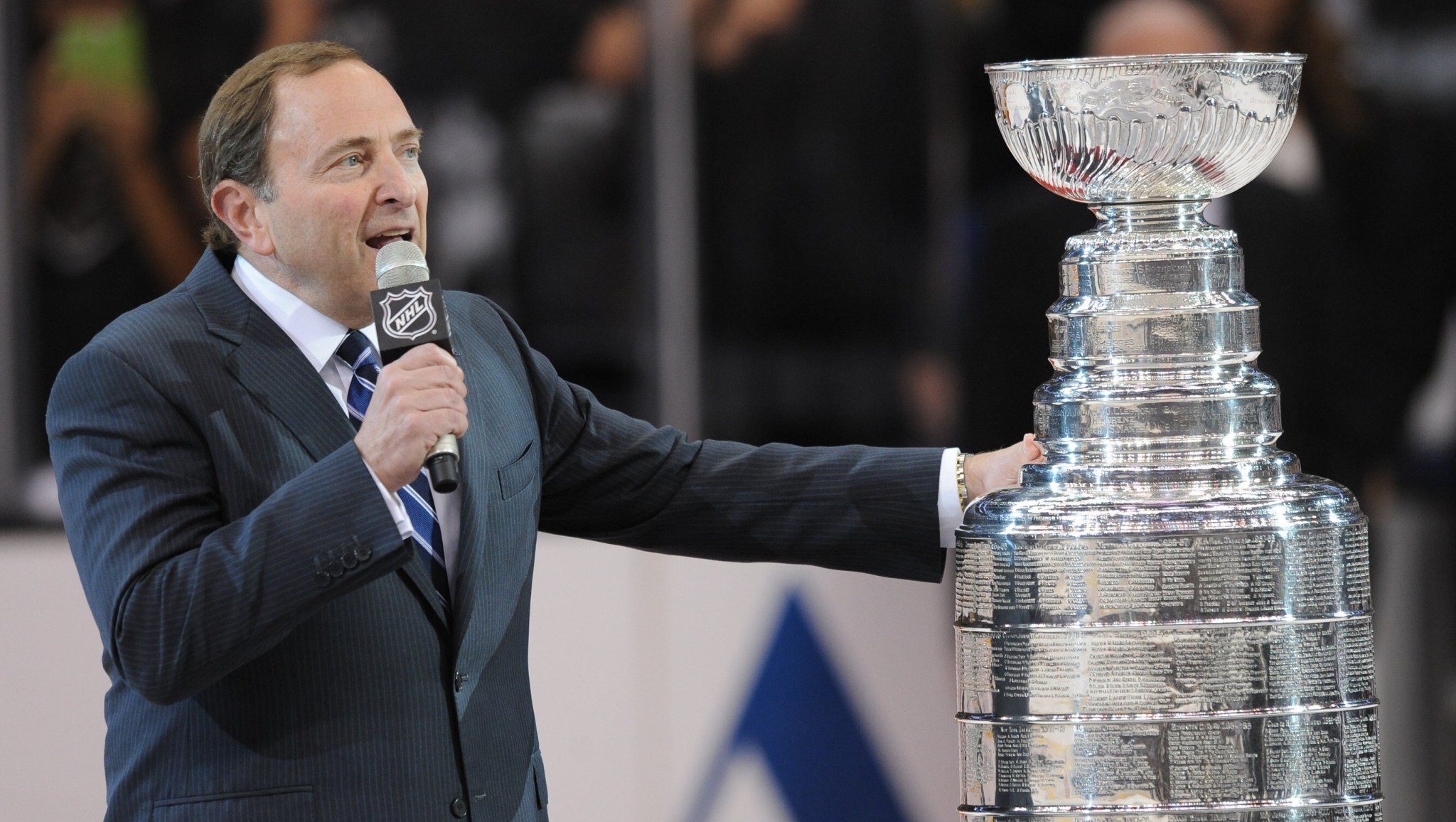 Winning a Stanley Cup doesn’t have to be difficult! By following the steps of this simple recipe, anyone can make an impressive run to a championship.

1. Start with several large spoonfuls of SMART DRAFTING. Continue until your prospect cupboard is full, then allow to bake slowly. Be patient — you can’t rush this part.

(Hint: You may want to try adding one tsp of TANKING to help the process along, assuming you can stand the smell.)

2. While you wait for your PROSPECTS to finish baking, assemble your other key ingredients. You will need:

• One FRANCHISE-PLAYER FORWARD, drafted with a top-five pick

• One GOOD GOALTENDER (If you don’t have a good goaltender available, an ADEQUATE GOALTENDER WHO PEOPLE THINK IS GOOD can also work.)

Mix together to form a CHAMPIONSHIP CORE, then allow to simmer.

3. When your PROSPECTS are ready, begin slowly adding them to the CHAMPIONSHIP CORE. Go slowly — dumping them all in at once may ruin the dish.

4. Mix in a few dollops of SMART TRADING.

5. Carefully add one or two helpings of FREE-AGENCY VALUE.

7. Cook together until you reach the SALARY-CAP CEILING.

8. Top with one SMART COACH, a dash of GRIT, and a heaping helping of GOOD LUCK, and serve while hot. Suggested drink pairing: champagne.

Chicago Blackhawks: I followed all the directions, and I have to say it really was super easy. In fact, I’ve already made this multiple times. Just wish I’d found this recipe earlier!

Boston Bruins: Same here: This was fantastic! Careful with the salary-cap part, though. If you’re not watching, it can overflow.

Los Angeles Kings: Fantastic recipe. I’m not a huge fan of free agents, so I usually substitute lopsided trade with Columbus, which works just as well.

Washington Capitals: Wait, are you sure there isn’t a step missing or something? I swear I followed all the directions, and it didn’t work at all.

Florida Panthers: Yeah, I’ve been trying this for years, and I never even seem to get past Step 1.

Anaheim Ducks: Good recipe, but I’d recommend doubling up on the Norris defenseman. Makes everything so much easier.

Detroit Red Wings: I’ve made this one often, and it always turns out great. Tip: If you’ve run out of top-five-pick franchise players, just swap in a few you have lying around from the sixth or seventh round instead.

Edmonton Oilers: Three to five years? Uh, don’t think so. I’ve had this in the oven for six and it’s not even close to being done.

Philadelphia Flyers: I have a severe allergy to goaltending. Does anyone know of a way to make this dish without it?

Vancouver Canucks: I’ve never been able to get this one to work. Everything always seems fine, but at the very end when I go to serve it, everything crumbles. Then there’s usually a fire.

Pittsburgh Penguins: Not bad, but honestly this makes it sound more complicated than it needs to be. If you just toss in a lucky Ping-Pong ball, you can skip most of these other steps.

St. Louis Blues: This sounds delicious. I might try it someday. Does anyone have a version of this recipe that uses a slow-cooker?

New York Rangers: Wait, where are you getting all of this free-agency value from? It’s never available at any store I’ve ever shopped at.

Edmonton Oilers: Me again. Now it’s been seven years, and still nothing. Something’s wrong with this recipe.

Montreal Canadiens: I’ve made this recipe way more than any of you. I could easily do it again if I wanted to, but I just haven’t felt like it recently. Still, it was really great when I used to make it all the time a few decades ago. Would you like me to tell you about it? Let me tell you about it … [Click to expand comment. 72,000 more words.]

Tampa Bay Lightning: I’m pretty sure I made this once, although nobody seems to remember.

Ottawa Senators: Hey, does anyone have a version of this recipe that doesn’t call for the salary-cap ceiling? Uh, I mean, I could totally use that if I wanted to. I just like the challenge of cooking without it. Yeah, that’s it.

Buffalo Sabres: Whoops. When it came to the tanking, I misread “tsp” as “gallon.” Hope it still works out!

Colorado Avalanche: I followed this recipe a few times and it worked great. I figured I’d try it again recently, but this time I skipped a few steps, and it still worked out just as well so I’m not sure why you’d bother with … oh wait, my kitchen just flooded.

Dallas Stars: I made this once and it turned out just right. I didn’t follow all the directions exactly, but that’s no big deal. It’s not like anyone’s going to care about one errant step.

Minnesota Wild: You know when you try to sprinkle in just the right amount of an ingredient and it won’t come out of the container so you tap the bottom a few times and then suddenly all of it falls out right into the middle of your dish? That happened to me at the free-agency step.

Winnipeg Jets: I was really excited to try this until I got to the part about trading. Didn’t know it was going to be one of those fancy-pants recipes with complicated steps that are impossible to do. No thanks!

New Jersey Devils: Great recipe. I used to make it all the time and was really happy with the results. One word of advice: Be sure to check the expiration date on your goaltender, because they’ll eventually go bad on you.

New York Islanders: I made this recipe a few times in the 1980s and don’t really see any reason to ever make it again.

Edmonton Oilers: Now up to eight years and counting. Not sure why it’s working for everyone else and not me, but it’s definitely not my fault. I think I know a thing or two about cooking!

Carolina Hurricanes: Wait, did that say grit? I thought it said grits. Never mind, my version turned out way better.

Arizona Coyotes: I’d love to try making this, but all of my cooking supplies are permanently packed away in moving boxes that I never end up using.

Nashville Predators: Ugh, my annoying neighbor from Philadelphia keeps coming over and trying to borrow my Norris defenseman.

San Jose Sharks: I‘ve been trying to make this recipe for years, but I always end up choking on it.

Edmonton Oilers: I just realized my oven was unplugged this whole time.