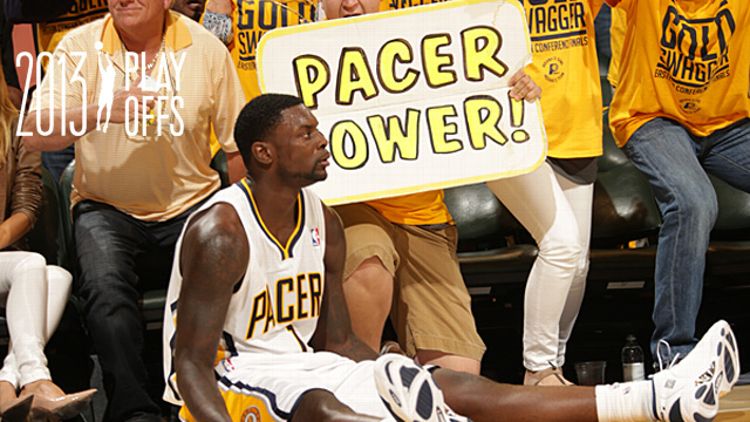 Jonathan Abrams did a great job telling Lance Stephenson’s story in depth a few months ago, but Stephenson has been good enough during the past few weeks to earn a second profile. With that in mind, let’s dive into the Lance Stephenson Experience by sketching out the bare essentials.

Lance Stephenson is a 22-year-old swingman for the Pacers. He was drafted 40th by Indiana in the second round of the 2010 draft, after a storied high school career, a scandalous recruiting process, and an underwhelming freshman year at Cincinnati. Larry Bird and the Pacers then shocked the NBA by giving him a four-year, $3.35 million contract that summer. What looked like a major risk then has paid off this season, with Stephenson helping Indy recover from Danny Granger’s absence, becoming one of the most improved players in the NBA, and holding a contract that suddenly looks like a steal.

He’s a defensive stopper with wildly streaky offense and wonderfully questionable decision-making, all while hurling himself all over the court at 150 mph. He’s also in the middle of a series where he’s antagonized almost everyone on the Miami Heat, and been effective enough to inspire “Jesus Christ” reactions across the entire NBA.

Where is Stephenson from? As Roy Hibbert told Chris Tomasson this week, “In practice he says, ‘Brooklyn, Brooklyn. I’m from Brooklyn. Get out of here.'”

I’m pretty sure every Pacers game for the past six months has featured announcers reminding everyone that Stephenson is from Brooklyn and played at Lincoln High School. This is getting old, you say? Well, sure. But it’s good to know that Stephenson reminds his teammates every day, as well.

“He has a little swag about him,” Hibbert added.

Of course he does. Brooklyn.

In the eighth grade he went head-to-head with a 17-year-old O.J. Mayo, who was then thought to be the next LeBron James. Stephenson held his own in a game that remains one of the most famous showdowns of all time at ABCD camp, and that made him a household name. From there the legend only grew.

The next year, as a freshman, he dominated the summer scene at Rucker Park, dropping 27 on Nate Robinson and Jamal Crawford. There was also the 2007 Elite 24 Classic, where Stephenson dropped 38 points in an All-Star Game featuring guys like Brandon Jennings, Tyreke Evans, and Kevin Love. This is how Lance Stephenson became kind of a superstar in New York City before he ever turned 18, with all the fun personality you would expect from an 18-year-old kid who had an entire neighborhood telling him he was the greatest player in America.

By the end of Stephenson’s career, his high school coach said, “I was just tired … I was at a point where I was ready to take a sabbatical from coaching, from everything. I was done.”

Did He Have an Internet Reality Show in High School?

Highlights: Lance’s uncle is named Smooth, his cousin is named Bigz, and at 1:42 he flips out on some helpless streetballer. High school Lance was the best. But also, definitely, the worst. Episode 1 ends with a montage of Lance highlights and scenes from Coney Island, all set to Soulja Boy. Shout-out to 2008.

Bumps in the Road

Nobody wants to talk about the 2010 Cincinnati Bearcats, so we’ll just pretend that piece of Stephenson’s career never happened. He was also charged with domestic battery in 2010, drawing the public ire of Larry Bird, and nearly ending his career before it ever started. He was ultimately acquitted, but it was still an awful incident. Then there was last year’s Heat series, when Stephenson made a choking motion in LeBron’s direction.

LeBron responded the following game by unleashing 40 points and a world of hell on the Pacers, and the Heat won three straight games. WHOOPS.

The Knicks had two picks in the second round (38, 39) and might have used them on Stephenson, the New York City legend. Instead they went with Landry Fields, allowing Stephenson to end up in Indiana in what was probably the luckiest break of his career. If Stephenson had gone to the Knicks, it would have ended HORRIBLY.

As Stephenson said after Game 6 of the Knicks series, “Larry Bird is a big factor in my life. He gave me the confidence to feel like I could play in this league. We text all the time. And I just want to thank him, because he’s a legend, and when he tells you that can do something, it gives you the confidence.”

Adrian Wojnarowski elaborates here. Bird put faith in him from the start, tutored him along the way, and still keeps in touch from afar. That might be the only thing crazier than Stephenson playing a crucial role in the NBA playoffs this year. It all comes back to Larry Bird.

Stephenson wears And1, which, along with Matt Bonner’s New Balance endorsement deal, might be the greatest union of athlete and brand in the history of sports and advertising.

Teammates Have Definitely Considered Murdering Him

“We’ve had some guys here in the ’90s that were older-school guys who would have snapped him in half by now,” Pacers announcer Mark Boyle told Abrams earlier this year. “I’m surprised that he’s still in one piece. He agitates his own teammates during practices. Not that it’s that bad. But day after day for six months, I imagine it gets on your nerves.”

Dexter Pittman Almost Did Murder Him

LeBron James Refuses to Acknowledge Him

This year: “If you are sitting here and talking about an individual one-on-one matchup between me and Lance Stephenson, I’m not going to harp on that.”

“‘He asked to guard him. He asked to guard him,’ said Vogel, seemingly really wanting to really emphasize that. ‘He’s a competitor. We know Paul (George) is getting worn out a little bit guarding LeBron the whole game that he’s in there. Lance said, ‘Let me share some of the load.'”

Of course. And you know, Stephenson harassing LeBron might just take him off his game for a second. Maybe.

Where Is Lance From?

We’ve already covered this, but it’s important, because it’s a big part of what makes the Lance Stephenson Experience so much fun.

Someday you may find yourself wondering If New York City is the mecca of basketball, how come there aren’t more stars who come out of New York City? One possible reason: Because any truly incredible basketball player from New York City is famous by the time he’s 12 years old, and you’re not gonna believe this, but it’s not totally healthy to grow up immersed in skeezy basketball culture for six years, all while you’re surrounded by a neighborhood that tells you you’re the greatest every single day.

Lance was no different from Sebastian Telfair before him, or Lenny Cooke, or Stephon Marbury, or 30 other would-be superstars. All of them became celebrities by the time they were 12 years old, and it changed the way they developed. That’s the side of New York City basketball that can be a little dangerous.

It’s the best kind of insanity. And yeah, we’ve had fun with the Lance Stephenson Experience for a lot of reasons. Because every Stephenson fast break is its own natural disaster, because any Stephenson jump shot can either hit the side of the backboard or all net, and because he will try to dunk on anyone, anytime. But there’s also a second level to what makes Stephenson so much fun. Every time he does something productive as a crucial role player on an NBA title contender, it still feels a little bit surreal. He wasn’t supposed to be here. He was supposed to be Lenny Cooke Part 2, another New York City cautionary tale.

But he’s grown up, he’s worked hard to turn himself into a killer role player as opposed to a guy who needs 25 shots a night, and he’s making it in the NBA. I’m as shocked as you are. The best part? Everything that makes Stephenson such a nuisance for the rest of the NBA is pure New York City. He will talk shit and harass LeBron all game long. He’ll attack the rim on Tyson Chandler, he’ll pull up to take any jumper in crunch time, and he’ll guard (or fight) anyone on the floor. Lance. Does. Not. Care.

It’s great. Growing up a superstar in New York City may have nearly ruined his basketball career, but thanks to some guidance from Bird and a fresh start in the other basketball mecca, he’s back on track, and bringing the best parts of New York City basketball to the Eastern Conference finals.

Now, there’s no telling where all this goes in the next few years. Whether he stays in Indiana, stays sane, gets even better, crashes back to earth. Who knows.

As for the next few nights?

“I think we match up well,” Stephenson told Abrams earlier this year. “Dwyane Wade is a very tough player. LeBron is very tough. [Chris] Bosh is tough. They have a great team and they’re older than us. We’ve just got to play hard and try to lock in on what they like to do. I think we can beat them. We match up well size wise and at the big man spot, we’re better than them. I think if we keep working, we can beat them in a series.”

I don’t know if the Pacers can actually beat the Heat, but I know that Stephenson thinks they can, and I know it’ll be fun watching him do Lance Stephenson things while the Pacers try. Because for all the respect he gives the Heat in that quote, deep down, we all know Lance thinks he’s better than LeBron James. Isn’t that why we love him?