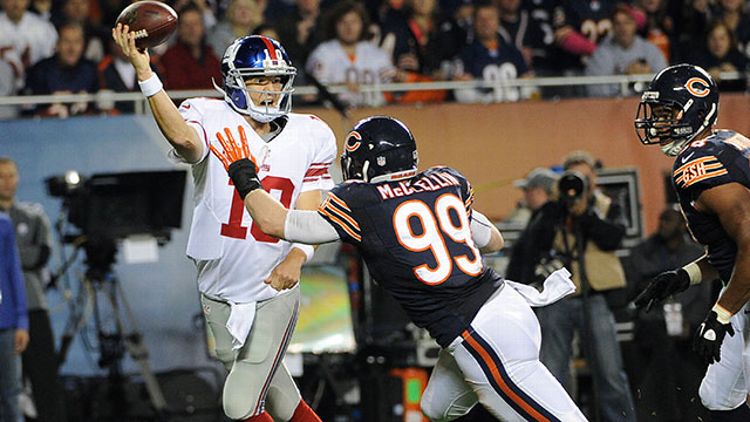 It hasn’t been a banner year for Thursday Night Football. With the NFL expanding the Thursday-night package from eight games in 2012 to 13 games in 2013, there will be a Thursday-night pro game during just about every week of the regular season. That uptick has not been met with praise and excitement. Players are concerned about Thursday-night games possibly affecting their health; earlier this week, 49ers wide receiver Anquan Boldin expressed his misgivings about players not having the necessary midweek recovery time between games, and that’s coming from a player who returned less than a month after having his face shattered by an Eric Smith helmet-to-helmet hit.

Fans, meanwhile, have grumbled about sloppy football. This year’s Thursday schedule has already produced a Jets-Patriots game overrun by drops and, recently, a Bears-Giants game seemingly built upon turnovers. Grumble all you want, but the Thursday games aren’t going away. In fact, speculation this week held that the league was considering expanding the NFL Network package to two Thursday-night games per week, a rumor quickly shot down by the league. Even so, it’s clear that the NFL is committed to retaining Thursday as a near-weekly stop on the NFL schedule despite the disappointing quality of the action.

Well, how much sloppier is it? Sloppy football isn’t easy to define; like pornography and pass interference, you know it when you see it. I think there are a couple of proxies that most would agree represent some form of sloppiness, and they’re concepts that we can actually analyze to reveal how sloppy Thursday-night football really is.

Turnovers equal sloppy football, right? Of course, when we think of sloppy turnovers, we think of Rueben Randle not cutting off his route and Eli Manning throwing the easiest pick-six of the season to a waiting Tim Jennings, not some glorious play where a safety reads a quarterback and sprints 25 yards to narrowly pick off a would-be touchdown. We think giveaways, not takeaways. So, while looking at all turnovers doesn’t inherently mean we’re looking at all sloppy plays, it’s a decent starting point.

This year’s six Thursday-night games (the five NFL Network contests and the season-opening Broncos-Ravens game on NBC) have been relatively messy. They’ve combined for 21 turnovers, an average of 3.5 giveaways per game. Those 21 turnovers have come across, per Pro-Football-Reference.com, a total of 819 plays, meaning that 2.6 percent of plays in the Thursday-night games this year have resulted in pointing battles or sprinting celebrations. That’s our sloppy football figure.

Our baseline for what football should be, obviously, is composed of the games from Sunday. And through six weeks, there have been a total of 10,315 plays, only two or three thousand of which feel like they’ve produced a Giants giveaway. In actuality, 275 of those plays have produced turnovers. When I get Excel to perform basic division for me, I find that the Sunday games are producing turnovers on … 2.7 percent of plays. That shocked me: Even with these six games that have seemed incredibly sloppy, Sunday games have actually produced turnovers more frequently than Thursday-night games. Now, it’s an incredibly small difference, but that their turnover rates are virtually identical is just as bizarre.

Well, that’s pretty bizarre. Again, Sunday has the highest turnover rate, and Thursday has the lowest. It’s a tiny difference, since we’re talking one fewer turnover in a Thursday-night game per month or so, but even the fact that we’re seeing virtually identical rates from day to day says a lot about the sloppiness factor.

Is the sample adulterated by most of the Thursday and Monday games being at night? After all, that football-for-creeps Chargers-Raiders game was pretty sloppy. If I just include the games that started after 7 p.m. ET on those days, does the Thursday-night sloppiness stand out? Yes, but again, not in the way you expect; Thursday-night games produce turnovers on 2.5 percent of their plays, while Sunday-night games yield turnovers on a whopping 3.0 percent of theirs, the biggest difference we’ve seen so far. (Monday-night games are at 2.8 percent.)

But what about selection bias? After all, the league probably picks teams that are supposed to be representatives of good football for their Thursday and Monday games, so they’re less likely to turn the ball over than the average team, which means fewer turnovers. Well, again, let’s see. For every matchup on Thursday and Monday night, I went ahead and calculated what their expected turnover rate would have been given how they took care of the football on Sundays during their typical games that year. It’s somewhat true: We know from the table above that the average game sees 2.9 percent of plays result in turnovers, but the matchups on Thursday have been between teams whose Sunday games produce turnovers 2.8 percent of the time. That doesn’t solve the mystery, because those teams then still turn the ball over less frequently on Thursday than they do on Sunday (or, at the very least given the small differences, don’t turn it over more frequently). The same is true for Monday-night games.

OK. Finally, let’s just say that the Thursday-night grind has mattered only since the NFL Network introduced that package in 2006; for some reason, there’s something about the theme music that sounds like it’s Christmas regardless of the time of year, and that makes quarterbacks turn the ball over. Are the numbers any different since 2006? No. Turnover rates are down, but they’re down across the board; 2.7 percent of plays on Sunday night result in turnovers, but a mere 2.5 percent of plays on Thursday night produce those changes of possession. Remember that the first six Thursday games of the year are at a mere 2.6 percent; that’s basically right about where it should be.

This isn’t perfect, since it includes takeaways without including things like fumbles that are recovered by the fumbling team and dropped interceptions, but there’s no reason to think that, say, a fumble is more likely to be recovered by the offense than the defense on a Thursday night than it is on a Sunday night. I can’t say that I was expecting this to be the case, but it appears that, at worst, Thursday football doesn’t produce more turnovers than Sunday football.

This one, on the other hand, should be clearly in favor of Sunday football. After all, Thursday night already has that Patriots-Jets game from Week 2 on its side, and — conservative estimate — about 50 percent of the passes in that game were dropped by the receivers. Let’s just get to this table quickly and we can all move on with our lives …

WHAT WHY NO. According to ESPN Stats & Information, which has charted dropped passes for every game going back to the beginning of the 2008 season, teams drop almost exactly as many passes on Thursdays as they do on Sundays. Because they throw an extra pass in on Thursday night, teams are actually dropping passes least frequently on football’s sloppiest day. In fact, teams drop passes more frequently during Monday-night games, which actually just resulted in the Stats & Information department being incinerated by a laser.

There doesn’t appear to be any of the adulterating issues with this sample, either. Passes have been slightly more likely to be dropped on Sunday games when they’re played at night, but they’ve been less likely to be dropped on Thursday-night games than during the early Thanksgiving tilts. Teams in those Thursday- or Monday-night games aren’t less likely to drop passes than your typical randomly selected team, so there’s not a selection bias issue, either.

What is true is that we’ve all seen a higher-than-normal drop rate through the six Thursday games this year. Stats & Information has charted 28 drops amid 417 pass attempts through the six Thursday games, a drop rate of 6.7 percent. (The official total for those games is 437 pass attempts, but Stats & Information is measuring these drops against only those passes that had a clearly targeted receiver, which is actually better for our purposes of determining whether a pass was dropped or not.) Finally, some proof that we’ve had to sit through ugly football! Of course, six games don’t tell us a heck of a lot. It’s probably just a small sample size.

Now, this doesn’t definitively prove that NFL games are as neat on Thursday nights as they are on Sundays. As I said earlier, there are a lot of ways to define “sloppy,” some of which aren’t exactly easy to quantify. With that being said, there’s little evidence suggesting that games that don’t take place on Sunday are suddenly ugly-football fests. And were we having this conversation in any of the previous seasons of Thursday Night Football the way we are this year? My guess is that we’ve probably just seen a bad batch of games so far in 2013.