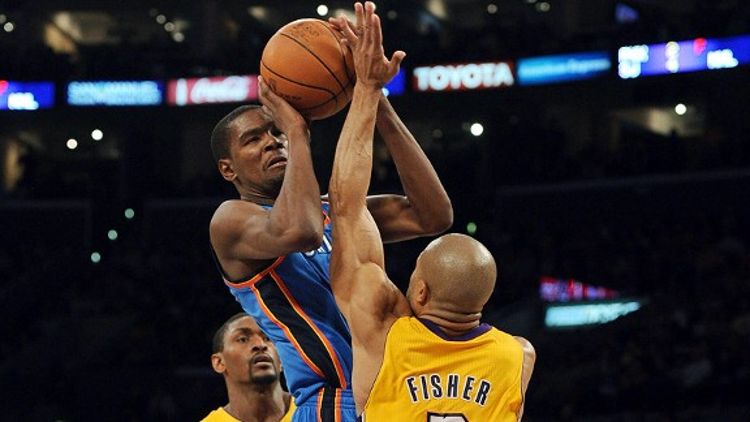 Some things exist only in movies. Epiphany-spurred couples reconcile at airports seconds before one embarks for Madagascar. Villains leave heroes tied up next to timed explosives after explaining their fiendish plan to steal the world’s magnesium supply. And twentysomething people in New York City live in spacious, vermin-free apartments. Ah, Hollywood.

Similarly, there are some rule violations that exist only in organized basketball. Try finding a three-second call in a game that doesn’t include referees, scorekeepers, and uniforms. The over-and-back rule is rarely enforced during pickup hoops. Claiming any kind of offensive foul on a playground could spark an argument that culminates with an unhappy gentleman skulking off to get a firearm from the glove compartment of his Pontiac. And you could play for decades without ever seeing any normal person attempt the so-called “rip-through” move, the most dipshit trick in basketball.

On the rip-through, an offensive player intentionally swings his arms into an aggressive defender and heaves the ball toward the basket in hopes of drawing a foul. Veterans such as Paul Pierce have mastered pump-fakes that coax defenders to leave their feet, but the rip-through does not fool opponents with sly misdirection or guile. Here, offensive players are rewarded for hoisting up a sudden, wild shot that typically flies as errantly as a wounded owl. It’s a play that would be considered demented on any blacktop on the planet.

Fortunately, despite the stench of rotting flesh that now seeps from the NBA politburo offices, there comes a bit of good news. Earlier this week, Stu Jackson, the league’s Executive Vice President of Basketball Operations, confirmed that the rip-through move would no longer be designated as a shooting foul — providing contact occurred before the start of the shooting motion. It’s unclear exactly how this will be enforced or interpreted, but the change was needed.

The most egregious exploiter of the rip-through is easy to single out. Almost by himself, Kevin Durant turned an infrequent incident that lacked any specific name into a problem the league was compelled to address. On one hand, the alteration of rules based on the dominance of a specific player is generally reserved for talents like Shaquille O’Neal, Allen Iverson, and Wilt Chamberlain. On the other hand, the rip-through sucks in every imaginable way. But it’s easy to see why Durant loves it. Just as Dhalsim kept foes at bay with a barrage of elongated limbs in the Street Fighter franchise, the rip-through is ideal for a lanky perimeter player who lacks the upper body strength to shrug off defenders who muscle up into his narrow carapace.

When Durant is hassled by a bulldog like Tony Allen, he swoops his arms in a half-moon arc into the defender’s arms and flings the ball feebly toward the basket. Visually, the result is a shot attempt so deformed and hideous that referees blow the whistle with the same instinct that might possess a Darwinist to stomp on a mutated, four-eyed frog. It’s unnatural.

Durant’s pipe-cleaner dimensions and Jansport stuffed with unique skills will eternally make him a magnet for all manner of foul calls — over the last two seasons, he’s drained more free throws than anyone in the NBA — but his use of the rip-through cheapens the freakish beauty of his game. It’s like slapping a “No Fear” sticker on the back window of a Jaguar. And seeing Durant stroll to the stripe for undeserved foul shots without a hint of shame makes a really personable guy less likable.

While Durant is the poster child for the rip-through, other players have integrated the chintzy gimmick into offensive repertoires that otherwise consist of fine, polished china. Kobe Bryant, of course, is one. A ruthless tactician who has added nuances to his game to counteract the withering of his athleticism, Kobe probably lurked in his dark, cavernous lair rewinding game tape of Durant and rubbing his multi-ringed claws together. And, in 2010, Kobe was the beneficiary of the most crucial rip-through call in NBA history.

With less than nine minutes remaining in the seventh game of the 2010 Lakers-Celtics series and his team trailing by four, Kobe was smothered by Ray Allen along the right sideline. As Allen overplayed his right side, Kobe abruptly swung his arms past the defender’s body and lurched diagonally into the air for a comically awkward three-point attempt (it actually glanced off the rim, thanks to Bryant’s knack for taking and sometimes making impossible shots). He drew the foul, and with Allen grimacing in disbelief, knocked down three free throws to make it a one-point game. If the refs choked on the whistle, the Celtics may have held on to their lead and we could have enjoyed another Kevin Garnett crying jag.

A pivot variation on the rip-through theme is used by Amar’e Stoudamire. When posting up, he senses the defender’s position, twirls quickly, and entangles his arms with any appendages he finds in the way. The post rip-through is less infuriating than the perimeter chicanery — if only because it resembles typical contact in the paint — but the motive is equally ignoble. It’s a fugazi shot attempt only attempted to induce a foul call. Ban it too.

But when fourth-tier players start scamming free throws, we must grab our slogan-inscribed signs, sleeping bags, and gravity bongs and head off to #OccupyRipThrough. During one playoff game against the Lakers last season, Jarrett Jack of the New Orleans Hornets used the ruse twice. Despite all the times superstars looped their arms into defenders in search of contact, I would bet good money that it was Jack’s shenanigans that finally caused the league office to say “Oh, hell no.” You’re not built for that life, Jarrett.

So the rip-through has ostensibly been banished. Sort of. Since it remains classified as a foul, players will still be able to earn trips to the free throw line by pulling it when an opposing team is in the penalty. You know, like late in close games, when the outcome could teeter on Kevin Durant being handed two free throws. The problem with the change in the rules is that it doesn’t go far enough. If David Stern and the NBA took the rip-through as seriously as they did the new Collective Bargaining Agreement, offending players would be charged with an offensive foul, forced to sit on the sideline wearing suits from Men’s Wearhouse, and entombed in a New Orleans Hornets uniform forever.