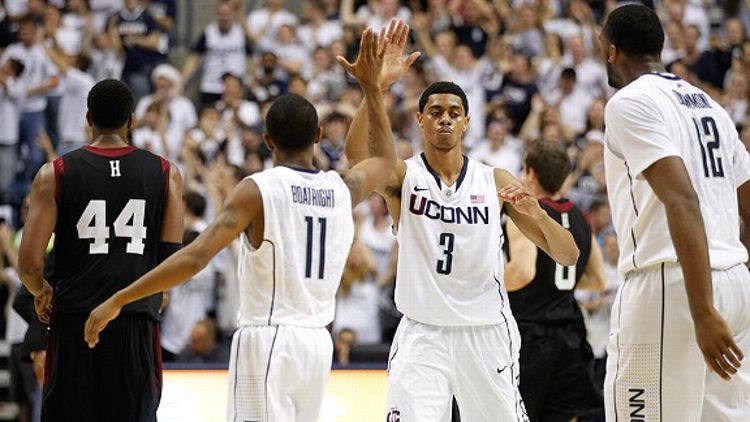 Harvard has long been ranked as one of the country’s best schools for higher education as well as one of the premier colleges to have a billion-dollar idea for a social network stolen. But it broke new ground this week by being ranked in something that has nothing to do with intellect, rowing a boat, or spontaneously playing chess with (possibly homeless) strangers at a nearby café — men’s basketball. After cracking into the rankings for the first time in school history Monday, the 24th-ranked Crimson went on the road to face the defending national champion UConn Huskies on Thursday night. In the end, no. 9 UConn proved to be too much for Harvard to handle, as the Huskies rolled to a 14-point, 67-53 victory and secured their most impressive win of the season. But while UConn dominated for most of the game and it never really seemed like Harvard had a chance, there were both positive and negative takeaways for each team. Let’s get the negatives out of the way first so we can wrap everything up on a high note.

It’s hard to find too much fault with the Huskies’ performance Thursday night because, like I mentioned, they controlled pretty much the entire contest, played their best game of the season, and handily beat a ranked opponent. But if I have to nitpick (and, sorry UConn fans, but I do have to nitpick to make the premise of this blog post work), the Huskies did raise a few concerns on the offensive end.

The one legitimate issue I noticed was the lack of an inside scoring threat. Now, I know Andre Drummond was doing chin-ups on the rim most of the night and Alex Oriakhi chipped in a few baskets, but against teams with big, strong, and athletic frontcourts, they likely wouldn’t have scored most if not all of the shots (and by shots, I mean dunks) that they did Thursday night.

Feeding the low post never seemed to be much of a priority, which was the most telling sign that UConn lacks a legitimate interior offensive threat. Considering the one post move from a UConn big guy that I remember was when Drummond air-balled a baby hook from the block, and considering UConn has an extremely talented backcourt led by Jeremy Lamb, Shabazz Napier, and Ryan Boatright, I can’t say I blame the Huskies too much. But if they’re ever going to be on the elite level with teams like Kentucky, North Carolina, and Ohio State, at some point it seems like UConn is going to have to establish an inside presence offensively, if for no other reason than playing inside-out would open up things more for the three star guards.

The other concern — which admittedly is a little more nitpicky — is that UConn often had questionable shot selection and lack of organization offensively, especially when it started pulling away from Harvard a little bit in the second half. Doug Gottlieb brought this up a few times during Thursday’s broadcast, and while I certainly don’t want to make agreeing with him too much of a habit, on this particular occasion, I have no choice. Once UConn blew the game open in the second half and ballooned its lead to as many as 16 points, the Huskies played a few moments of “my turn” basketball. Now, I’m fully aware that going one-on-one and taking less-than-great shots with a 16-point lead against a team that’s much less talented isn’t exactly the biggest deal in the world. But the same sort of thing was also happening in the first half a little bit, when the outcome of the game hadn’t yet been decided. UConn coach Jim Calhoun certainly doesn’t have to panic over this or anything, but it’s something to keep his eye on because inevitably, UConn wil play in some close games this year, when every possession will matter and Napier jacking up contested 3s early in the shot clock could come back to bite the Huskies.

Harvard was more or less dominated by UConn and never looked like a legitimate threat, which probably isn’t the greatest thing for a program that was playing its first game as a ranked team and trying to prove that it belongs on the national stage with the big boys. UConn’s defense completely shut down the Crimson, and while Harvard did show patience and executed its offense well at times, it also had stretches (like the end of the first half and start of the second half) when it just couldn’t get its offense going.

The guy who had the most trouble putting the ball in the basket for Harvard was its leading scorer and reigning Ivy League player of the year, Keith Wright, who went scoreless in the first half and finished with just nine points on 3-of-10 shooting. What would trouble me, if I were a Harvard fan, is that this seemed to be less because he was having an off night and more because he was basically shut down by Connecticut’s big guys. Wright, to his credit, didn’t appear to be all that frustrated and was willing to take what the defense gave him and kick it back out of the post more often than not. But when he did try to make post moves, he looked pretty robotic and generally didn’t have much success because UConn’s bigs had a distinct size advantage and were essentially immovable walls all night long.

Obviously, Harvard isn’t going to play a team with UConn’s size and athleticism the rest of the regular season, so Wright’s struggles probably shouldn’t be overanalyzed all that much. At the same time, though, it should be noted that if you watched any one-minute stretch of the game last night, it was glaringly obvious as to which team was the defending national champion and which team wasn’t used to a prime-time game on national television. Coming into the game, Harvard was undefeated and was the first ranked Ivy League school since Princeton in 1998, which makes for a fun storyline, but the bottom line is that Connecticut looked like it was on a whole different level than Harvard, and the Crimson still have a long way to go before they scratch the surface of national relevancy.

I’m not sure there’s a player in the country I enjoy watching play offense more than Jeremy Lamb. The guy can shoot from anywhere, can handle the rock, plays within himself, and has smoother game than Trent Walker hitting on beautiful babies. Maybe it’s just his long arms, but he kind of reminds me of a shorter Kevin Durant, which is why I think the Huskies should run their offense through him even more than they already do. But then again, I think what I love most about Lamb is that he picks his spots beautifully and hardly ever seems to force anything. He’s got a great feel for the game and knows that he doesn’t need to shoot the ball every time he touches it because Napier and Boatright can carry big chunks of the offensive load too. Meanwhile, down low Drummond looked like an absolute monster for the Huskies, and fulfilled the “Greg Oden on the 2012-13 Miami Heat” role perfectly last night by playing solid defense, rebounding, deferring to the three leading scorers on offense, and trying to break the backboard every time he had the ball within five feet of the basket.

Defensively, the Huskies smothered the Crimson so badly that every time ESPN cut to Tommy Amaker on the sidelines, his crossed arms and motionless face made him look so appalled by what he was seeing that it appeared as though he was watching the “2 Girls, 1 Cup” video. Harvard couldn’t get anything going offensively, and most of that had to do with the fact that Connecticut’s big guys bottled up Keith Wright while the guards made it uncomfortable for Harvard’s perimeter players. I halfway expected UConn to not respect Harvard all that much and just kind of go through the motions, but the Huskies seemed to have a good understanding that this was their biggest game of the season until February, and they showed that by bringing some intensity on the defensive end. I know it was only one game, I know they’ve had their struggles so far this year, and I know there’s still a lot of basketball left to be played, but last night, the Huskies looked like they were every bit the national title contenders everyone thought they’d be before the season started.

The good news for Harvard is that this loss doesn’t really mean much in the grand scheme of things, as it is still a very good team that should cruise to the Ivy League title and secure its first NCAA tournament berth since 1946. The even better news is that once it gets to the tournament, I wouldn’t be surprised if the Crimson won a game or two because they’re built like the consummate mid-major Cinderella team. They are experienced, they play solid defense, they are capable shooters, they have a go-to guy to whom they can get the ball when they need a basket (the UConn game notwithstanding), and — you’re never going to believe this — they play smart basketball. Harvard knows its limitations and doesn’t try to do anything it can’t do. I’m not sure if Harvard is actually the 24th best team in country. But I am sure of this — the Crimson played hard last night, they clawed their way back into the game a few times when it looked like they were on the verge of being blown out, and all things considered, they definitely could’ve been beat much worse.

At the end of the day, this isn’t really a bad loss at all for Harvard because, like I’m pretty sure I heard Stephen Bardo say during the halftime show, “There’s no denying that UConn is talented as balls.” Thursday’s game gave Harvard a great experience that will pay dividends come March, when it could possibly be playing a team close to UConn’s caliber in a 14-versus-3 or 13-versus-4 first-round matchup in the NCAA tournament.

But more than anything else, the most positive thing Harvard should take away from this game is that its program has reached the point to where its block of fans at Gampel Pavilion was so loud that the UConn student section actually started a “We can’t hear you” chant to drown them out, then followed that up with the “Na-na-na-na / hey, hey, hey, good-bye” chant to rub in the victory. I’m far from the authority on these sorts of things, but I’m pretty sure that when the student section of the defending national champion taunts your small group of fans up in the nosebleeds without having been provoked, you’ve accomplished something.

Previously by Mark Titus:
The Tar Heels Have No Interest in Defense (and Other Observations From North Carolina-Kentucky)
Challenge Talk: An ACC Fan Gets Real With A Big Ten Fan
Introducing the Club Trillion National Player of the Year Belt