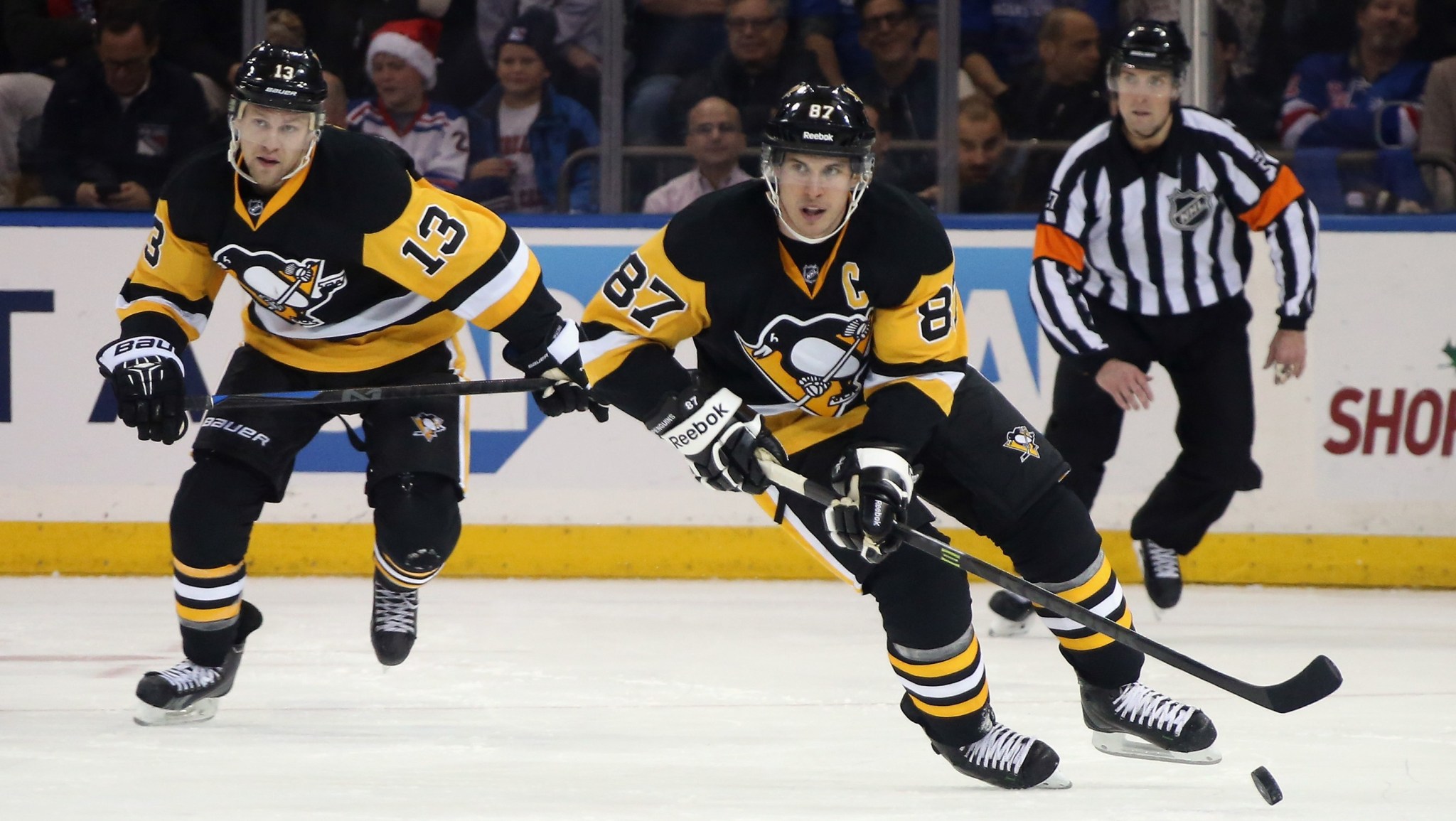 Theme of the Week: Welcome to Mumpsville, Population Everyone

A mysterious outbreak of the mumps continues to wreak havoc across the league, and the list of victims now includes the NHL’s best player. The Penguins kept Sidney Crosby out of a pair of weekend games as a precaution, citing concerns that he may have come down with the viral disease.

Those concerns were confirmed on Sunday, when the team announced that Crosby had indeed been diagnosed with the mumps. He’ll be sitting out again for tonight’s game against the Lightning, although he could return as early as next week. The situation represents an odd reversal for the Penguins, who initially insisted that their captain didn’t have the condition despite his alarming appearance at Friday’s morning skate. Needless to say, that turned out to be wrong, and now some are questioning why the team exposed Crosby to teammates and media.

The illness has been making its way around the league, starting with the diagnosis of Anaheim’s Corey Perry and Francois Beauchemin in early November. The total number of players affected now stands at more than a dozen, with the list of affected teams including the Ducks, Wild, Rangers and Devils, and now the Penguins. According to one report, a look back at the schedule reveals that the disease could have started with the Ducks and then been passed from team to team.

While the illness is more typically associated with school-age children, it can infect adults as well, and it can spread easily within an NHL rink or dressing room. That’s led to teams around the league taking precautions in an attempt to prevent further cases, with the league head office and the NHLPA also becoming involved. But it hasn’t been enough to stem the outbreak, with New York’s Derick Brassard the latest to fall victim.

And the story won’t be going away anytime soon; according to a CDC expert, it would take as long as 50 days from the last reported case before we could sound the all-clear.

5. New York Islanders (20-10-0, plus-9 goals differential) They’ve cooled off lately, but a Saturday-night win over the seemingly unstoppable Blackhawks was enough to at least earn them consideration for a spot. Also, they get bonus points for being the only team left that is yet to feed at the loser-point trough.

4. Pittsburgh Penguins (19-6-4, plus-25) They’ve cooled off, too, which is probably to be expected with Crosby out and other key players injured, but they’ve managed to maintain a slight lead in the Metro.

3. St. Louis Blues (20-8-2, plus-19) They’ve won four straight, including two against the Islanders and Saturday’s overtime win over the Avalanche. They’ve got a pair coming up this week against the Kings, which should be a fun matchup (and potential conference final preview).

2. Anaheim Ducks (21-6-5, plus-12) Their 47 points gives them a five-point cushion on top of the overall standings. Far more importantly, they’re on the verge of bringing the Ilya Bryzgalov Experience back to our lives.

1. Chicago Blackhawks (21-9-1, plus-34) They finally lost on Saturday, dropping a 3-2 decision to the Islanders that snapped an eight-game win streak that stands as the league’s longest this season. That’s not bad for a team that’s been starting its third-string goalie lately.

There’s a division missing this week: For the first time all year there’s no representative from the Atlantic on our list. That’s because, to use some technical hockey terminology, the division has gone all screwy on us.

The Lightning had been a regular since the season’s second week, and they’re certainly a decent contender for a spot. They’re tied for the lead at 41 points, and their plus-23 goals differential and 18 ROW1 both lead the division. But they’ve looked out of sorts recently, losing a pair to the Capitals and one to the Blue Jackets; their only win in their last four was a narrow 2-1 decision over the lowly Hurricanes. Maybe they rout the Penguins tonight and make me look bad, but right now they’re not scaring anyone.

The Red Wings had been surging, moving into a tie with the Lightning for first place, but now they’ve lost three in a row. And the Canadiens have won two straight to snap an extended slump, but still look like an awfully flawed club. Those three teams have jostled for the division lead all season, and may well continue to, but I don’t think any of them are one of the league’s five best teams today. Meanwhile, the preseason consensus pick to win the division continues to spin their wheels, as the Bruins have lost five of six and dropped all the way out of a playoff spot. There’s still time to turn things around, of course, and I still see them comfortably in the postseason by the end of the year, but it’s been a long time since they felt like an elite team.

Seeing the four most talented teams struggle has created some opportunity for the division’s also-rans. The Maple Leafs have taken advantage, winning five straight and inching within one point of the Habs. The Sabres have won three straight and seven of their last 10. The Senators still look like a mess, but at least there’s hope that new coach Dave Cameron can turn things around.

And then there’s Florida. The Panthers haven’t exactly been hot — they’ve got just three wins in seven games this month, which includes two losses to the Jackets and one to the Sabres — but they’ve very quietly moved into a tie for a wild-card spot. That’s been largely thanks to a league-leading eight loser points, so let’s not get too excited. But between rookie Aaron Ekblad and veteran Roberto Luongo, they’ve been a surprisingly positive story so far. In the Atlantic these days, “surprisingly positive” is about as good as it gets.

5. New Jersey Devils (11-15-5, minus-19) They’ve lost three straight and nine of their last 11, including a 4-3 decision to the struggling Stars, and Peter DeBoer’s hot seat is starting to smoke.

4. Buffalo Sabres (12-16-2, minus-35) They’ve won three straight and have moved within three points of seventh place in the Atlantic. The team they’re chasing for that spot, the Senators, are in town tonight.

3. Arizona Coyotes (10-16-4, minus-29) The losing streak is up to five. Worse, they haven’t had a ROW win against a team other than the Oilers in more than a month.

2. Carolina Hurricanes (8-18-3, minus-22) They were thumped by the Flyers 5-1 on Saturday, and have now failed to earn a point (or even score more than one goal) in five straight.

1. Edmonton Oilers (7-19-5, minus-39) They finally snapped their 11-game losing streak on Monday, then went out and lost four more. The coach is mad at the players, the players are mad at each other, and we’re getting headlines that contain the phrase “don’t even seem to be trying.” Other than that, things are fantastic.

Well, well, look who’s not on our list this week. After a five-week stretch of bouncing between the third and fourth spots, the Blue Jackets drop off thanks to a December win streak that’s reached six games. They haven’t been quite as impressive as that stretch indicates — only two of those wins have come in regulation — but points are points, and it’s been a nice change from the end of November, when they lost six straight.

The biggest factor behind the turnaround has been goaltender Sergei Bobrovsky, who’s been excellent and has reestablished himself as one of the league’s best. Winger Nick Foligno is enjoying a career year, and center Ryan Johansen hasn’t shown any signs of rust from that lengthy training camp absence due to a contract dispute. The Blue Jackets are also getting healthier after a spate of injuries early in the year left them without eight regulars, including Bobrovsky, Brandon Dubinsky, Artem Anisimov, and Nathan Horton. Anisimov has since been reinjured and Horton probably won’t return at all, but at least the roster now bears some resemblance to how they drew it up in the offseason.

It’s probably not enough to get them back into the playoff race; they’re six points out of the wild card and would have to pass six teams to get there. But at least there’s hope, which is more than we could have said about this team even a week ago.

• The Blue Jackets and Blackhawks made a minor deal yesterday, with Chicago sending unhappy youngster Jeremy Morin to Columbus for defenseman Tim Erixon.

• The Senators got their first victory under new coach Dave Cameron on Saturday, topping the Bruins 3-2 in a shootout in Boston. Robin Lehner made 29 saves to earn the win.

• Saturday’s 3-2 Blues win over the Avalanche was Paul Stastny’s first game back in Colorado since signing a $28 million free-agent deal with St. Louis in the summer. Stastny, who spent eight years as an Avalanche, received a few boos and was held pointless.

• The Canucks have now lost four straight, including a 5-1 drubbing by the Rangers on Saturday. The Canucks remain tied for second in the Pacific, but after contending for first place much of the season they’ve now dropped nine points back of the Ducks.

• Elliotte Friedman sat down with prospective Las Vegas expansion franchise owner William Foley on Hockey Night in Canada. Among the revelations: Foley likes “Black Knights” as a potential team name. Feel free to get your Monty Python puns ready ahead of time.

• Finally, the Canadiens’ 6-2 win over the Kings on Friday gave ESPN an excuse to produce this: