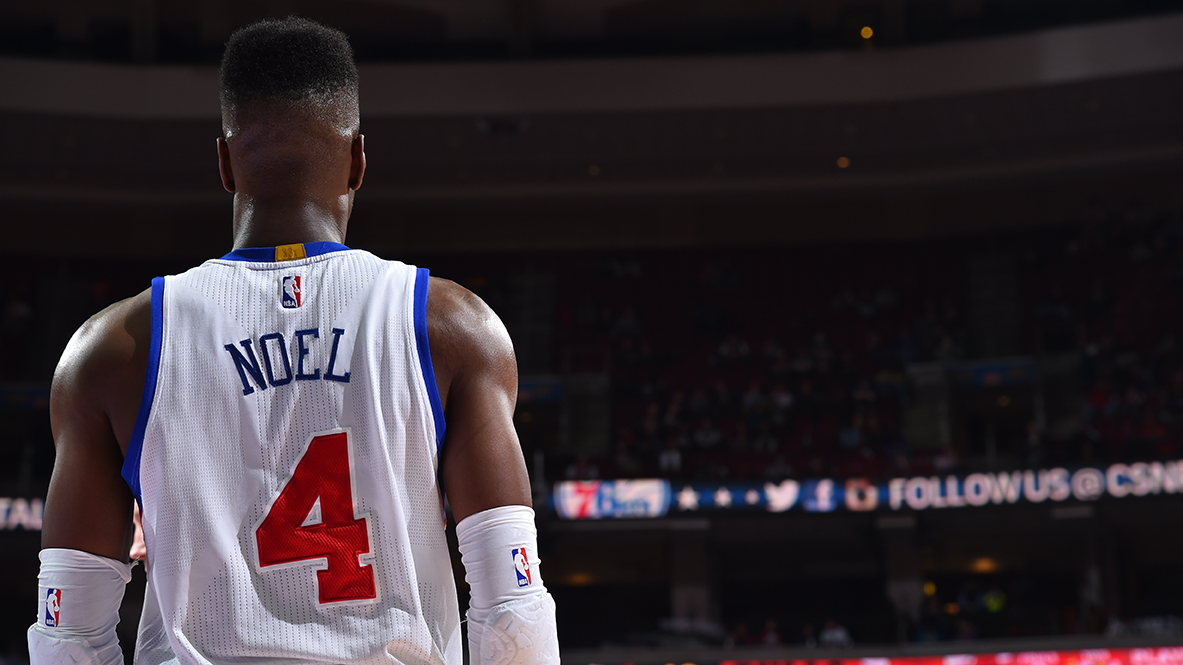 The wisest strategy for winning the rookie of the year award is to chuck up lots of shots and make some of them. This season’s front-runner, Andrew Wiggins of the Timberwolves, has the gambit down: He’s leading all first-year players in scoring at 15.7 points per game, busting out a 33-point effort in a prominent matchup against LeBron James in January. That should be enough to get him his trophy.

But for nonconformists who rebel against the tyranny of points, Nerlens Noel is your guy. The Sixers’ 20-year-old rookie is a lanky strand of sinew with a Big Daddy Kane flattop, a limited offensive game, and some of the most stunning defensive numbers ever posted by someone of his tender age. Not only does Noel lead all rookies in rebounds, blocks, and steals, he’s also the only NBA player in the top 10 in both blocks (eighth) and steals (10th). That’s not, you know, normal.

Since the All-Star break, Noel has averaged 11.5 points, 10.5 rebounds, 2.8 blocks, and 2.8 steals a night. He rejected nine shots in a game against the Pacers last month. In the Sixers’ recent upset of the Hawks, he amassed 11 points, 17 rebounds, and five steals. (He has an absurd total of 19 acts of thievery in his last four games.) If you want to unspool a convincing narrative for why Noel should be rookie of the year, look no further than his defense.

“He’s an extremely gifted athlete,” Sixers coach Brett Brown told Grantland. “At his height, there’s a speed and a quickness that produces havoc defensively. His ability to do things at the rim is extremely special.” Brown considered Noel’s burst of cartoonish numbers a benefit of experience. “When you first start using NBA language and rules, it’s all moving too fast,” he said. “Now, he’s doing a hell of a lot less thinking and a hell of a lot more playing.” 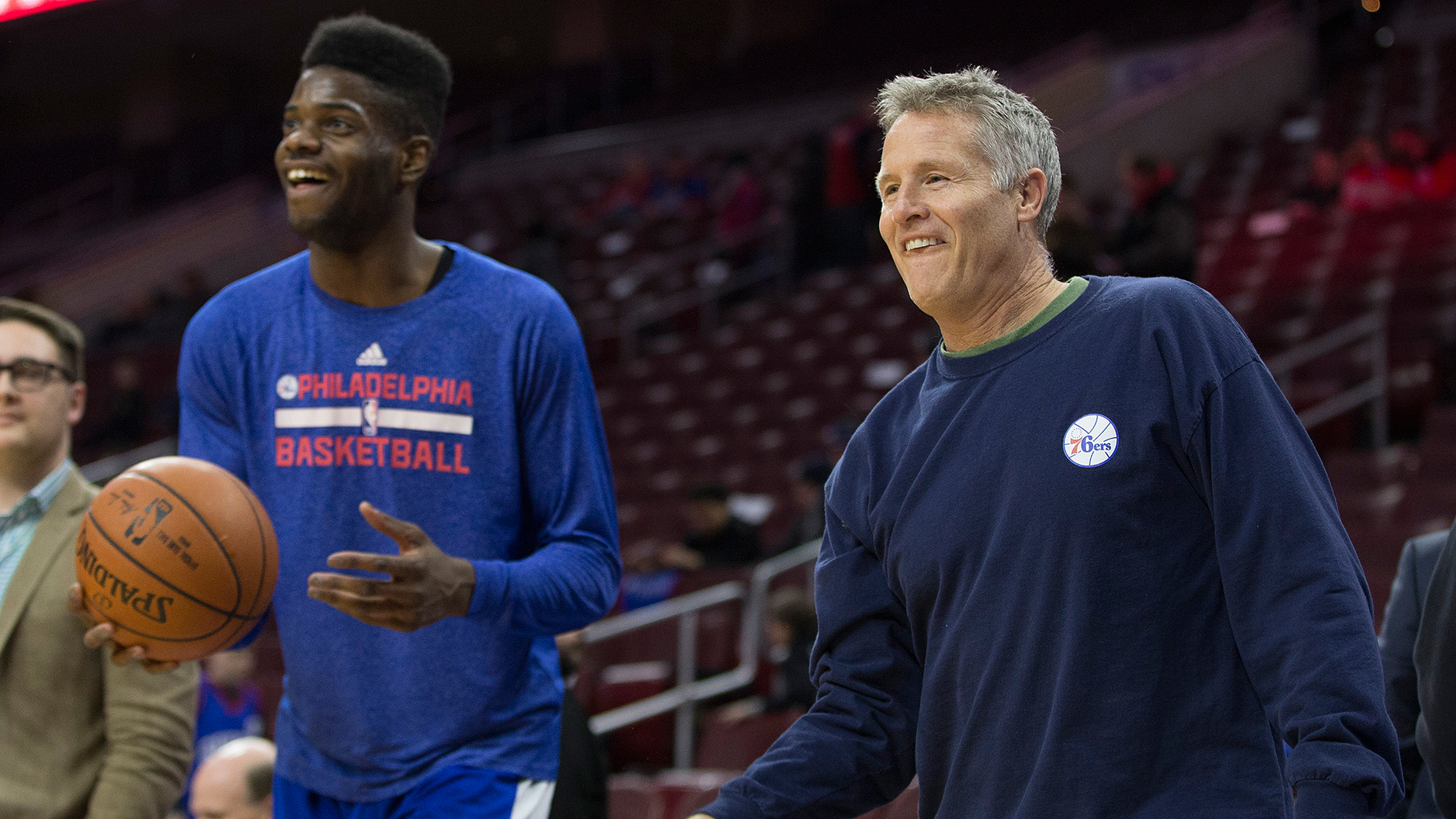 Noel was supposed to be a defensive demon when he entered the University of Kentucky in 2012 as the top-ranked high school recruit in the nation. But after tearing an ACL in February 2013, he missed the rest of the season and fell down the draft board. Selected sixth by New Orleans, he was packaged with a 2014 first-rounder and sent to Philadelphia for point guard Jrue Holiday. The trade earned Sixers GM Sam Hinkie a reputation as a cunning cardsharp and could deeply affect both franchises. That’s bad news for the Pelicans.

Noel sat out the entire 2014 season rehabilitating his knee and was something of a chimerical creature. (Unlike injured teammate Joel Embiid, he didn’t show up in any Vines pulling off between-the-legs dunks or raining corner 3s during warm-ups.) But after 60 games, we’re beginning to understand Noel’s capabilities and chapel-high ceiling.

Basically, he’s a 6-foot-11, 228-pound cable of razor wire that stretches from the rim to the 3-point line, with a 7-foot-4 wingspan and tightly coiled springiness. He ends up at locations and altitudes far more rapidly than opponents expect. On a single possession, he might poke the rock away from a point guard, swipe at the dribble of a big man posting up, and then bound across the paint to alter a shot as the weakside helper. According to Brown, Noel’s exceptional attributes include ambidextrous shot-blocking, an uncanny sense of timing, and a pogo-stick second jump. Plus, with the NBA’s emphasis on pick-and-rolls, the ability for a center to switch onto point guards is critical when assembling an effective modern defense.

Whether confronted by opposing big men who outweigh him by 60 pounds or stretch 4s with deadly perimeter marksmanship, Noel’s counterattack involves speed. He fronts the post against behemoths like Dwight Howard or Nikola Pekovic, and he uses his quickness to run shooters like Dirk Nowitzki off the 3-point line. “If he wants to meet at the rim, I think I can beat him there,” Noel said.

See, Noel has that pride and fearlessness that devastating shot-blockers must possess (because you’ll inevitably get posterized), and it results in violent aerial altercations. He’s not rising with bland, Hibbert-ian verticality. The Eraser is coming to punch your shit. So far, James Harden, Kevin Durant, and Russell Westbrook have already been fly-swatted by the rookie, who has 114 rejections.

“I think people are coming to the basket a little less because I’m putting up shot-block numbers,” said Noel, who said smothering Harden’s dunk attempt was his favorite of the season. “Intimidation serves its purpose.”

Advanced metrics support the eye test. Noel’s Defensive Box Plus/Minus ranking is second in the NBA, his Defensive Rating is eighth, and, according to SportVU player tracking, opponents shoot only 45 percent at the basket against him, which places him in elite rim-protector territory. The Sixers surrender 99.5 points per 100 possessions when he’s on the floor — which is slightly better than the Rockets and Blazers, the third- and fourth-best defenses in the league. He’s the primary reason Philly’s defense has jumped from 27th last year to 12th this season — and it plunges back down when he leaves the hardwood, according to NBA.com.

Noel’s cross-categorical stat-glomming has led to flurries of hyperbolic and arbitrary historical comparisons: The last player to rack up precisely eight points, 13 rebounds, five blocks, and four steals was a holographic Wilt Chamberlain going against Dan “Mimbo” Cortese in the 1993 MTV Rock N’ Jock game! But generating statistical similarities to David Robinson, Hakeem Olajuwon, and Ben Wallace is not exactly a bad look.

On the other hand, Noel’s offensive game is less winsome. He is averaging only 8.8 points on 44 percent shooting, with more turnovers than assists. He was unvarnished coming out of Kentucky and is still learning to score beyond spoon-fed dunks and putbacks. He’ll occasionally flutter a runner that draws only air, or entangle his legs like a newborn foal when pivoting in the post. He especially struggles on the road, where his field goal percentage is a dismal 37 percent, as opposed to 53 percent at home. (Neither he nor Brown had an explanation for this chasmic split.)

But Noel has played better on offense since the All-Star break, scoring 11.5 points per game with improved efficiency and visible dedication to attacking the basket. Not coincidentally, that coincided with the February trade deadline, when the Sixers dealt Michael Carter-Williams to Milwaukee for a first-round pick. Noel was surprised by the trade of his former AAU teammate, but believes there have been beneficial aftereffects. Since then, the Sixers are shooting more than 30 3-pointers a game, up from about 24 attempts. “There’s a lot more room now,” Noel said of the offensive spacing. “It’s opening certain things up. The ball moves a lot more, and I think guys are able to play a lot more fluid and smooth.” 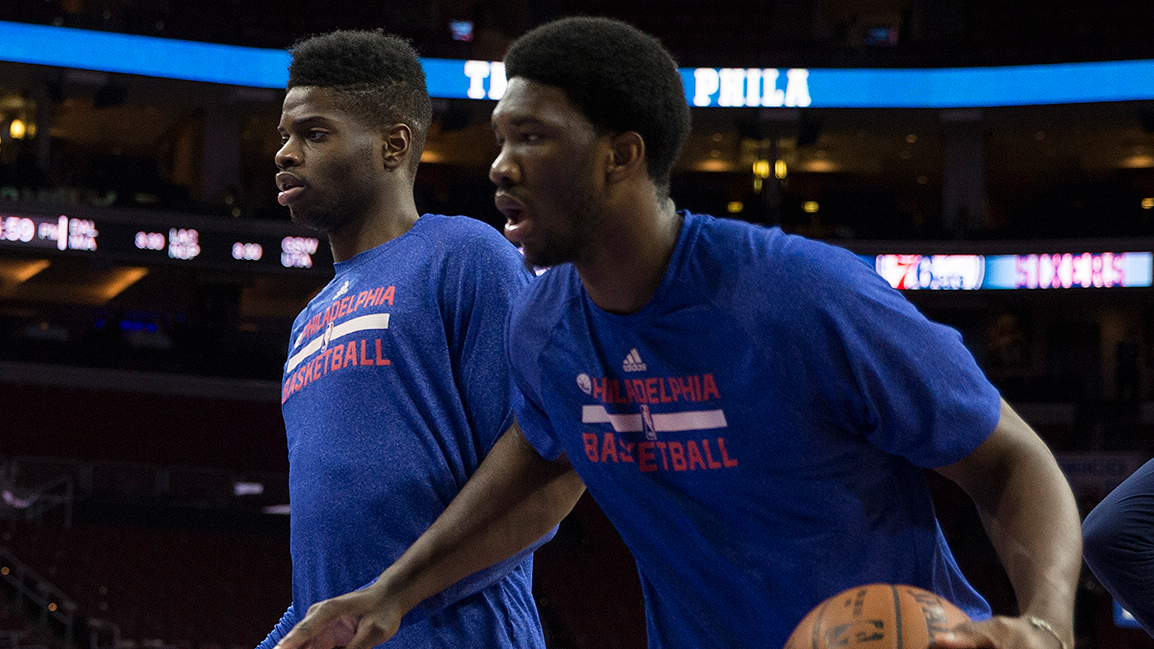 People get hung up on Noel’s iffy jumper and lack of a pirouetting Dream Shake, but the key to his recent improvement has been boring and basic: free throw shooting. He’s been getting to the line far more frequently and draining freebies at a 67 percent clip in the second half. (For the season, he’s at 60 percent, which was roughly Brown’s goal.) Those are important developments for a big man. “I’ve put in thousands and thousands of reps from when I was hurt until now,” Noel said. “Earlier in the year, I was nervous and wanted to convert on them, because you never know how many shots you’re gonna take. As I gained confidence on offense, it really improved my free throw game. I know I can knock them down.”

With Embiid scheduled to join Noel on the Philly front line next season, the Sixers appear on the cusp of building a defense that will essentially protect the basket with oversize, fire-breathing pterodactyls. Pairing the two on offense will require more extensive tinkering. While the Cameroonian rookie looks like more of a polished scoring threat, Noel may not be satisfied as a defensive hound who feeds off the gristle of alley-oops and second-chance junk. “Guaranteed, Nerlens wants to be more than that,” Brown said. “I don’t think he wants to pick-and-roll his whole life. He wants to be a face-up guy and make plays at the elbow. Down deep, Nerlens wants to be Amar’e; he wants to be Kevin Garnett.”

At the moment, he also might be rookie of the year.