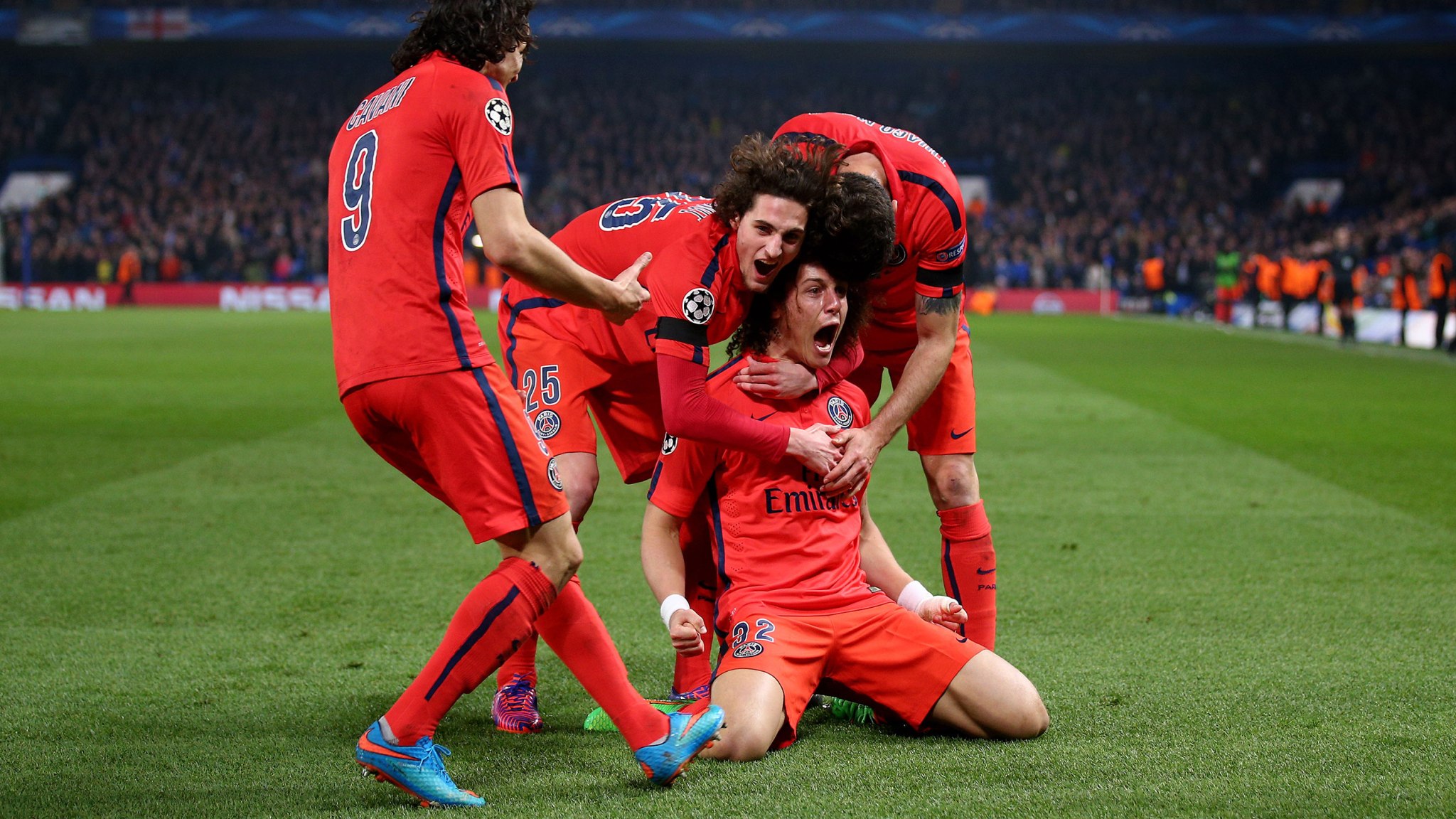 Chelsea and Paris Saint-Germain came into yesterday’s Round of 16 match notched at 1-all, with the London club holding the away-goals tiebreaker after the first leg. Thirty-one minutes into the game, PSG’s Swedish superhero, Zlatan Ibrahimovic, was given a questionable red card, and then Chelsea, propped up by a one-man advantage, strolled … into a thunderdome filled with UFC-level off-ball high jinks and Brazilian center backs with plutonium foreheads. The match went off the rails again and again and again, ultimately ending in a 2-2 extra-time draw, which sent the Parisians on to the next round. We’ve rounded up the most madcap moments from the midweek mania — but before we get to them, a quick word from Zlatan.

Spike Friedman: Let’s just run down the litany of things that happened with Diego Costa on Wednesday:

• Knocked over David Luiz in the box
• Went down himself minutes later, after colliding with Luiz
• Did the worm out of frustration at not being awarded a penalty when he was brought down by Edinson Cavani in the box
• Nearly earned an assist on a Gary Cahill goal from a scuffed a shot that fell to his teammate
• Committed a horrific tackle on Maxwell only to receive a yellow card for his efforts
• Sort of head-butted Luiz immediately following the tackle on Maxwell
• Threw Marquinhos to the ground while the ref wasn’t looking after being denied a foul call
• Was forced to play out wide when 64-year-old Didier Drogba came on in extra time
• Got in the faces of Brazilians Thiago Motta and Thiago Silva — and also probably Pelé, Sócrates, and Garrincha in his mind — after PSG’s second goal
• Made Luis Suárez shake his head while watching the match at home and say, “Man, that dude is nuts”

David Luiz Is Rubber, and Diego Costa Is Glue

Mike L. Goodman: Luiz was immense for the entire 120 minutes against Chelsea, his former club. In addition to a game-saving goal in the dying minutes of regulation, he completely took Costa out of the game, which included this:

That, less visually gifted friends, is a flying elbow to the face. It’s also probably a red-cardable offense, but it happened while the referee had his back to the play. In other words, it’s exactly the kind of snide, overly physical, super-dirty play that Costa specializes in.

After a late, dirty, borderline red-card tackle by Costa on Luiz’s defense partner, Thiago Silva, later in the match, Luiz and the Spanish striker squared off once again, with Luiz acting like he’d just been head-butted in an attempt to get Costa sent off.

For a player with a reputation for losing his mind, Luiz was cooler than basically any Premier League defender has been against Chelsea all season. He accepted all of Costa’s abuse, and never once retaliated with an uncalculated emotional outburst. Instead, he just got even.

Eden Hazard, the Unshook One

Goodman: So, this penalty is ridiculous.

On a slightly saner — but still totally insane — evening, that would have been an absurdly cool penalty to win a match. Wondering how much I own you, Salvatore Sirigu? Not only are you going to commit to going the wrong way, but I don’t even have to slow down to wait for you to go. Don’t worry, though. I’ll roll the ball by just slow enough, so you can land and look back right as it crosses the goal line. On any night other than last night, that’s the kind of swagger that carries teams to the Champions League quarterfinals.

Courtois’s save on Silva’s first attempt was textbook. He takes a step off his line as the outswinging ball comes in from Ezequiel Lavezzi. As soon as it’s clear that he won’t be able to reach it, the Belgian takes three quick steps back to his line. Silva’s header is perfect, as he drills the ball down toward the goal line, forcing Courtois to suddenly shift his momentum to the side. And yet somehow, with arms like Dhalsim from Street Fighter II, he gets a palm to the ball, forcing it wide. The 22-year-old’s unfair combination of length and footwork make him one of the best young keepers in the game. That his hand made contact with the ball was incredible. That the contact was firm enough to save the shot is unbelievable.

If Chelsea had cleared the ensuing corner, this play would have been remembered as the one that kept Chelsea alive. Instead, it’s the penultimate moment in an ill-fated last stand.

Goodman: Scoring a set piece goal essentially requires a perfect storm of unlikely events converging. You need great, coordinated movement to open up an attacker, the right delivery — at the right speed and right trajectory — to get the ball to him, and then a well-placed volley or header to finish the deal off. Even still, it often takes a defensive misstep to link it all together.

On Luiz’s goal, he gets close to a free header on the ball because Chelsea is man-marking him. With all the bodies in the way, Branislav Ivanovic, who appears to have the Luiz assignment, can’t get a clear run on the ball to contest the header. Edinson Cavani and Silva occupy their own men, but they also prevent Costa from attacking the ball, and so it drops perfectly onto Luiz’s head.

On the second goal, Gary Cahill is determined not to get caught up in the sea of attackers like Ivanovic did. So when his man, Adrien Rabiot, loops around Silva, the England international plows through the body in his way. Unfortunately, that body belonged to teammate John Terry, who was marking Silva:

Terry’s man scored the goal, but it was Cahill, working so hard to stick with Rabiot, who ultimately freed Silva up.

One defensive misstep and you concede from a set piece. Two — and you’re out of the Champions League.