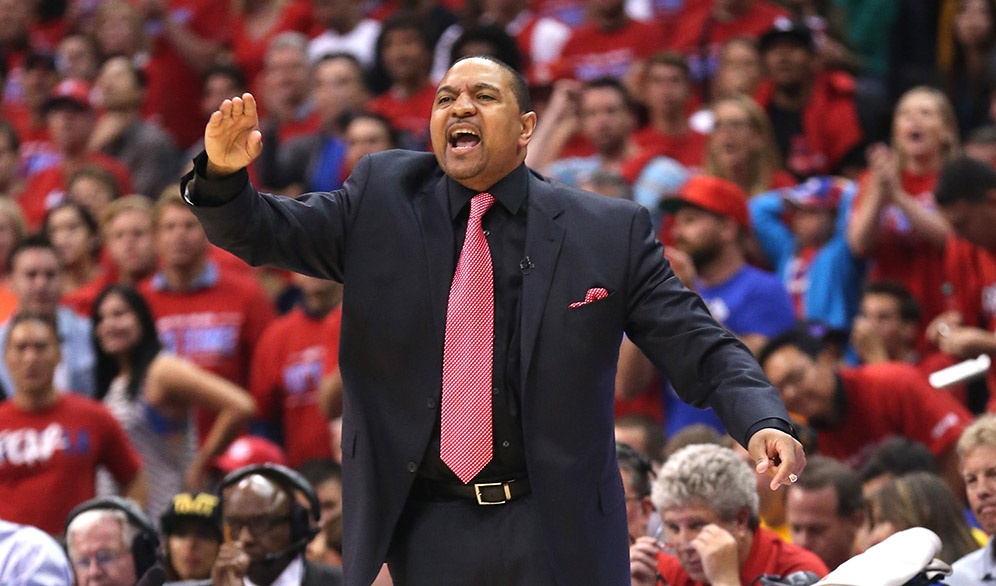 I first interviewed Mark Jackson about 20 games into last season for a piece about Golden State’s massive improvement on defense. Jackson went out of his way to point out, unsolicited and on the record, that it would be wrong to publicly credit any single assistant coach for the team’s transformation.

It was a weird thing to say unprompted, my first window into Jackson’s personality —  a strange brew of braggadocio, inspiration, and insecurity. That personality ultimately cost Jackson his job in Golden State despite a near-unprecedented run of on-court success for one of the league’s sad-sack franchises. There were some on-court issues, but Jackson and his staff did a nice job with this roster. They are gone mostly because the environment in Golden State became toxic.

As I wrote last week, Jackson demoted Brian Scalabrine, an assistant coach, to the D-League after initially firing him without cause in front of players. The team fired another assistant, Darren Erman, after learning he had been secretly recording conversations Jackson had with other coaches. Erman was concerned Jackson was bad-mouthing him behind his back, multiple sources have said, and poisoning his relationship with players. The team changed the location of Erman’s parking spot without warning, sources say. Jackson also made it known he preferred that Jerry West, a senior adviser to the Warriors, stay away from practices.

The Warriors have looked into allegations that another assistant coach beyond Erman had also been recording internal conversations, per multiple sources. The environment had just grown dysfunctional; Jackson’s “don’t mention a particular assistant” quip, a reference to Mike Malone, now the Kings’ coach, turned out to be a harbinger.

The responsibility isn’t all on Jackson. Joe Lacob, the team’s owner, is a loud and strong personality, and two such personalities mixed together can create bad results. No one should be taping conversations in California without consent. West is an intimidating presence, and Jackson isn’t the first head coach to request West keep his distance; Phil Jackson famously did the same in Los Angeles, asserting himself early as the franchise’s alpha male.

But the front office clearly became fed up with Jackson’s combativeness, and Jackson justifiably did not want to return as a potential lame duck in the last year of his contract next season. Firing Jackson is a risk, but front offices and ownership ultimately hold the power, and they have the right to take that kind of risk.

Golden State is now the sixth team with a coaching vacancy, and the open job with by far the best roster of players. Various reports have linked the team to Mike D’Antoni, Tom Thibodeau (provided Chicago gives him permission to interview, which is doubtful), Mike Dunleavy Sr. (unlikely), and Steve Kerr. This is why the Knicks wanted to move fast on Kerr. There is mutual interest between Kerr and the Warriors, per several sources, and the Warriors offer a lot of appealing things to Kerr — a strong roster, and a West Coast location near his home in southern California and his daughter’s college.

Stan Van Gundy would be a great fit anywhere, and there are lots of qualified assistants waiting to snag a head job — Nate McMillan in Indiana; Monte Mathis and Kaleb Canales in Dallas; David Vanterpool in Portland; David Fizdale in Miami; Nick Nurse in Toronto; J.B. Bickerstaff and Chris Finch in Houston; Ed Pinckney and Adrian Griffin in Chicago; and others.

But taking over a 51-win team in a loaded conference is different than taking over a lottery team in an awful conference, especially with New York fans ready to embrace anything that looks like calm and competence as a savior. The conference split is so dramatic that it is becoming a major factor for prospective coaches. No playoff team in the West was safe from a first-round upset, and both Minnesota and New Orleans could make the race for the last playoff spots even more interesting next season.

Meanwhile, a coach could win 45 games with the Knicks next season and make the conference finals. The city would go bananas.

Expectations are much higher for Golden State, and they should be. Jackson and his staff constructed a top-five defense out of a roster that starts Stephen Curry and David Lee. The team is capped out through the 2015-16 season, and it’s already traded two future first-round picks to Utah in clearing space to sign Andre Iguodala. The Dubs have spent, and they’ve built a very good roster.

Where you come down on Jackson probably has something to do with your take on that roster. There is a lot of skepticism that any coach could have done much better than 51 wins and a first-round exit in the crazy West. The Warriors only have one All-Star in Curry; the Thunder, Clippers, and Blazers all have two, and the Spurs are the Spurs. Perhaps Golden State is really just a mediocrity within this conference.

But that undersells the talent here. Iguodala is an elite multipurpose tool, a perennial borderline All-Star in the weaker conference. Andrew Bogut in his prime was an All-Star talent, and though he’ll never reach his two-way peak again because of injuries, his defense this season was as airtight as it has ever been. Klay Thompson is a solid NBA shooting guard, Lee is a versatile offensive player (and two-time All-Star), and Curry is a devastating scheme-buster. Whatever your base defense, you have to toss it out against the Dubs.

The bench was shaky after the departures of Carl Landry and Jarrett Jack, but no team really wants those contracts on their books right now. The Warriors should be far enough under the tax to use the full midlevel exception this offseason, and possibly again in July 2015. Getting Festus Ezeli back will help, and the two rookies who didn’t play at all this season will develop. Draymond Green has already emerged as a crucial piece, though he has only one year left on his deal. No one knows what Harrison Barnes is yet. The Warriors had sky-high internal expectations for him before the season, but he flopped, and he may end up as a trade chip for a team that can’t deal first-round picks. The Dubs will surely peddle Lee and Barnes as a combination as Lee’s contract ticks toward expiration.

You have to go back only to the 2011 Mavericks to find a team that won the ring with one jump-shooting All-Star and a bunch of well-selected “pretty good” puzzle pieces. The Pau Gasol–Kobe Bryant Lakers weren’t appreciably more talented, top to bottom, than these Warriors at full health. Hell, these Dubs damn near took out the Clippers despite Bogut’s absence. The lines between Western Conference powers are very thin.

Golden State pushed the Clips by playing a smart brand of hoops — going small, running Curry in pick-and-rolls, and whipping the ball around the Clippers’ trapping defense until an open shot emerged. Again, Jackson is a smart coach who did well with this team. The offense had some hiccups, and any team with this level of passing and shooting should rank better than 12th in points per possession. This team didn’t quite reach its ceiling, and the team concluded Jackson wasn’t the right guy to push that ceiling higher.

The Dubs were sometimes careless with the ball, though they cleaned that up as the season went on. Their offense lacked continuity; opposing defenses that snuffed out the first option could count on the Warriors devolving into a vapid isolation play over the last 12 seconds of the shot clock. The team chased mismatches on the block like an addict, chucking the ball to so-so post-up players and asking them to back down into uncomfortable fadeaway shots.

Those were low percentage plays in the aggregate, but there were situations in which they worked. Barnes and Thompson can both score over smaller players, and some opponents are stupid enough to double-team post-ups far from the hoop — opening up shooters around the floor. The Warriors punished both San Antonio and Denver in the playoffs last season by attacking smaller guards down low, forcing both teams to scramble their rotations. They weren’t quite able to inflict the same damage against the Clips, though there were stretches in which post-ups were effective.

The next coach just has to mold the talent toward a more cohesive, cooperative offense. The materials are there; these are refined players with some exquisite skill sets. The defense is fine as is, though coaches must always nurture that end of the floor.

Kerr is a triangle offense guy, but he’d surely be willing to run a more traditional hybrid offense instead of imposing the pure triangle on a talented veteran team. D’Antoni is an offensive genius, but he’s damaged goods right now, and he has clashed with players at each of his last two stops. Van Gundy isn’t a happy-go-lucky sort, but he was well-liked in Orlando beyond Dwight Howard, and he has always maximized his team’s talent on both ends.

There will be other candidates. This is an attractive job. Firing Jackson is not some no-brainer, black-and-white choice, and there is no way of knowing how it will work out. Basketball is a funny, unpredictable sport. D.J. Augustin had one foot out of the league before saving the Bulls’ season. Luol Deng is a well-respected jack-of-all-trades, but he didn’t move the needle much in Cleveland, despite filling a position at which the Cavs had got zero production. Moving on from Lionel Hollins to Dave Joerger was a risk that infuriated the fan base during Memphis’s early struggles, but it has worked out just fine.

Golden State did well under Jackson, and he was a big part of that success. The players spoke up for him and played hard. But the Warriors are wagering they are better off with a different coach, and they have legitimate grounds — for basketball reasons and off-court issues — to believe that.

Now let’s see who they hire.