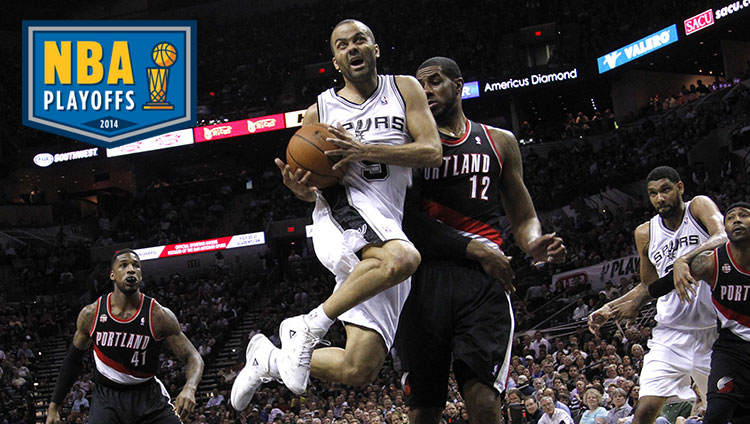 The Time for Feelings Is Over

Danny Chau: For his 25th point in the game (with 2:40 remaining in the third quarter), Tony Parker drives hard on the left side, swivels, and traps poor Mo Williams in a vortex in his wake. Parker finishes, gets fouled by the helpless Williams, and lets out a baby lion roar. He emotes not because the play was some deviation from his usual programming — no, the play was quintessential Tony Parker. He emotes because, as the Shins would say, he’s facing the android’s conundrum. Natural law states that humans yell on and-1 plays. Thus, to affirm the existence of what humanity still resides in and around his central processing unit, he lets out a baby lion roar. It’s pretty convincing, actually!

Unfortunately, the ruse nearly falls apart when TNT makes the mistake of panning over to Tim Duncan over at the bench for Duncan’s “reaction.” His face is motionless. His eyes do not shutter. It’s hard to tell if the play was just so commonplace that it didn’t warrant an expression, or if Duncan was in sleep mode. (Do androids dream of electric sheep?)

Parker finished with 33 points and nine assists against the hapless Blazers, and was close to scoring a point a minute in three of the four quarters. It was a thorough dismantling. The first six games against the Mavericks highlighted the Spurs’ soft and fleshy exterior. But now the Spurs look like this. In the last two games, San Antonio has won by an average of 23.5 points. Humanity is overrated.

Uh who is bangs for spurs? Lol boy ballin . Trynna earn him a scholarship tonight! Ball out son!

netw3rk: Lightly used backup-backup big man Aron Baynes dropped 10 points and seven boards on a Blazers team that was — along with most of the population of Earth with the exception of Oceania — largely unaware of his existence until last night. Baynes played 491 regular-season minutes and six minutes against the Mavs in the first round, so, of course, Gregg Popovich ran him out for 14 minutes in Game 1 against Portland because Gregg Popovich is some sort of witch.

Popovich’s ability to take unheralded college players, international dudes you never heard of, guys with no knee ligaments, and marginal veterans, plug them into his system, and have them put up numbers is, at this point, completely unfair and a little bit spooky. Just in the last few years: Matt Bonner, DeJuan Blair, Kawhi Leonard, Danny Green, Patty Mills. And now Baynes. I fully expect to see Pop get meaningful playoff minutes out of a cardboard cutout of Batman and some random household items next year.

netw3rk: Considerable Russian mineral wealth was spent last summer to assemble a Nets team specifically tailored to match up with the Heat. Brooklyn swept the regular-season series, and, while no one really thought the Nets could knock off Miami, there was a realistic expectation that their hybrid small/big lineups, turnover-forcing defense, and pair of ancient Heat nemeses — soaked in the mystical embalming fluids of experience — could give LeBron & Co. problems. And, hey, maybe that will still happen; it is, as they say, a long series.

But here’s how untroubled Miami was by the Nets’ interchangeable sizes last night: 47 percent of the Heat’s shots were taken at the rim, and they converted 68 percent of those shots and outscored the Nets in points in the paint 52-28. Sixty-six percent of LeBron’s attempts came at the cup, and his most uncomfortable moment was the split second after the buzzer sounded when he wasn’t sure if David Beckham would go in for a dap or a bro hug.

For the Nets, an area they should focus on improving for the next game would be: everything, except for Joe Johnson’s offense. They defended poorly, played lethargically, got Hibbert-esque numbers from Kevin Garnett. Mason Plumlee (a huge part of their post-January success) continues to be out of his depth in the playoffs; and Jason Kidd ran out some truly weird lineups before, perhaps prematurely, tying his white shirt around a stick and waving it from a parapet. Kidd ran out a Livingston-Thornton-Kirilenko-Teletovic-Plumlee lineup in the second half (second half of a SECOND-ROUND PLAYOFF GAME), a lineup that played only five regular-season minutes, during which it notched a sizzling plus-minus of -48 with 33 percent shooting. Small sample, sure, but with a large whiff of desperation. Also, not to pile on, but the Nets are also the only team left in the playoffs with a negative regular-season point differential.

Game 1, Through the Eyes of Michael Beasley

Chau: Eat a few cookies. Find out an hour before tipoff that you’re active. Rush over to tape yourself. Cheer your heart out for 45 minutes. Look up at the scoreboard. “Oh, shit, 2:13 left. Nice, dude’s about to say ‘Dos minutos!’ right now.” Look over at coach. Squint as he motions his fingers. Shrug it off. … Wait. “Oh. OH.” Enter the game. A minute later, throw down a dunk. Check Twitter in the locker room. So many “Beasley has more points and rebounds than Roy Hibbert and Kevin Garnett in the second round, combined” tweets. Swell with pride. You are Michael Beasley, human victory blunt.

On the Brink of Survival, Remembering Sunderland's Heartbreaking Relegations