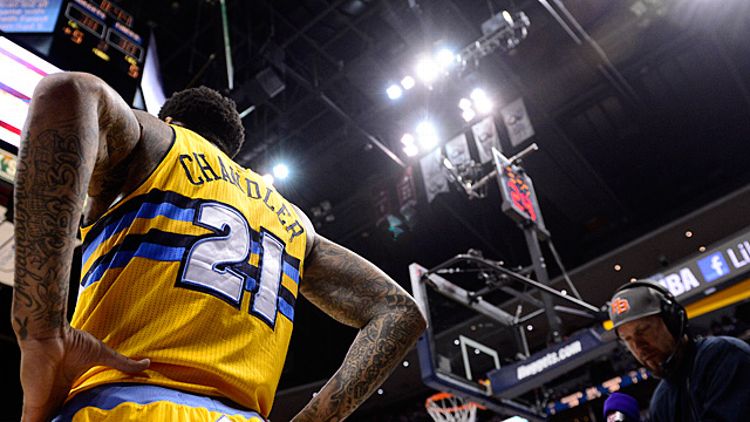 Early in Denver’s game with Phoenix on March 11, as a deflection sent the ball into the hands of Denver’s Andre Iguodala, his teammate Wilson Chandler took off toward the opposite rim. As Iguodala moved the ball toward the center of the floor with a series of high, hard dribbles, forcing two retreating Phoenix defenders to shift toward him, an open pathway to the rim began to emerge in front of Chandler, bounding along the right flank. A quick shovel pass from Iguodala was easily secured by the galloping Chandler, who needed only two long, explosive strides to soar past a helpless Luis Scola for a vicious, two-handed dunk.


Wilson Chandler is Denver’s Shane Battier. While physically and stylistically dissimilar, the two players share one very important trait: They are the keys that unlock two of the most versatile rosters in the NBA. For the Heat, that means freeing LeBron James and Dwyane Wade from expending too much energy on defense. Chandler’s flexibility, meanwhile, allows the Nuggets to field a multitude of lineups that accomplish their sole purpose of playing at a breakneck pace for a full 48 minutes.

Chandler’s growth into this role has been triggered by his improvement as a perimeter shooter. The Denver forward has seen his 3-point percentage rise to 42.7 percent this season, a huge leap from his career mark of 33.2. Though this is likely a bit outside his true capabilities, even a slight regression still allows for Chandler to be a valuable floor spacer on a Nuggets roster devoid of 3-point threats. Coupled that with his defensive versatility — Chandler can match up 1 through 4 — and it should come as no surprise he is present in two of Denver’s top three five-man lineup combinations that have played at least 50 minutes together.

The sample size is obviously fairly small, but it shows that when Denver goes “small” with three wings and one lone big, it is a much more potent force. Chandler’s positional flexibility and capable outside shooting allow the team to avoid playing with two traditional big men.

As the nominal power forward for the majority of his time on the floor, Chandler also supercharges Denver’s running game. Given his speed advantage against opposing power forwards, Chandler can run the wide lanes on a primary break and simply blow right by his opponents for easy buckets in transition.

The 25-year-old is also effective in transition with the ball in his hands. When teams like Denver look to push down the floor as quickly as possible, every second counts — even the relatively short amount of time it takes the big man securing the rebound to make an outlet pass to the lead guard. Chandler’s ball handling allows him to “rip-and-run,” bypassing that outlet pass and making Denver’s quick-strike attack even faster.

No Nugget has benefited more from playing with Chandler than Danilo Gallinari. The Italian forward is really a power forward who masquerades as a 3 in the presence of rebounding machine Kenneth Faried. According to 82games.com, Gallinari has a PER of just 14.7 when manning the small-forward position. Move him to the 4, though, and that number explodes to an All-Star level PER of 20.7. When Chandler is in the game, Gallinari — the bigger and more powerful of the two players — is often checked by the opposition’s power forward. This is a huge boost for Denver’s offense given its style of play in the half court.

If unable to get a bucket on the break, the Nuggets’ base offense is predicated on dribble penetration. Along with Denver’s other perimeter players, Gallinari is typically asked to break down defenders off the bounce, creating a shot for himself or starting a drive-and-kick series that leads to a good shot for a teammate. Against opposing small forwards — who are typically quicker — the Italian forward has trouble creating separation. Put a slower frontcourt player on Gallinari and the odds of success increase dramatically, mostly explaining Gallinari’s massive jump in production when he shares the floor with Chandler. Not surprisingly, the duo is Denver’s second-best two-man combination per NBA.com (strangely, the Andre Miller–Kosta Koufos twosome is tops).

This is all made possible by Chandler’s versatility on both ends of the floor. Like Battier, he makes the team’s best frontcourt even more dangerous on offense while taking on the tougher assignment on the defensive end of the floor. It goes without saying, however, that Gallinari — as well as Ty Lawson — still offers nowhere near the level of production Miami gets from James and Wade.

Denver still has no star, but it has found some intriguing lineups that provide the flexibility and spacing needed for either the streaking Lawson or improving Gallinari to take over at the ends of games. And just like a blue-collar veteran in South Beach, the Nuggets have their own unheralded forward to make it all possible.