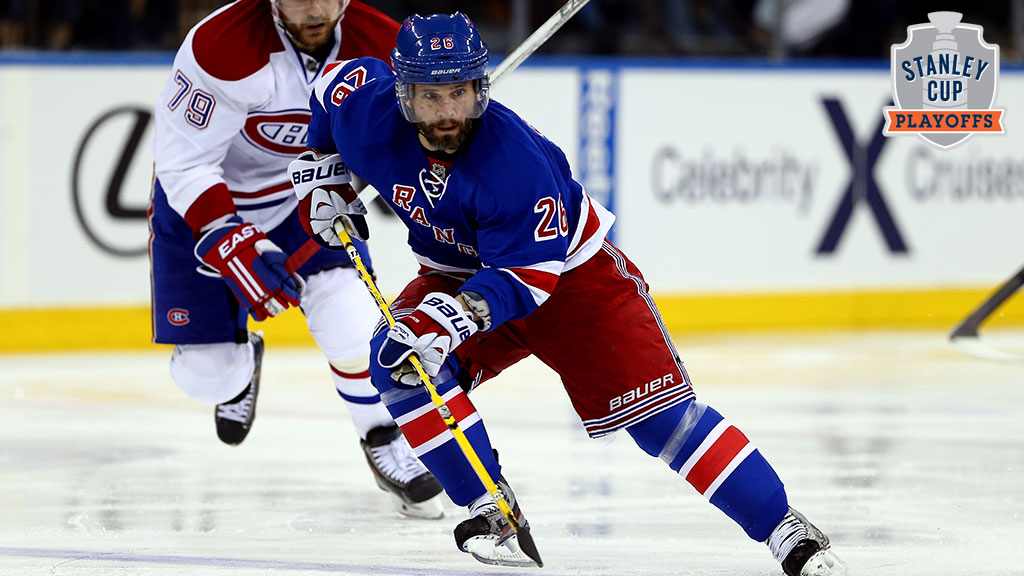 The New York Rangers remain one game away from heading to the finals for the first time in 20 years, thanks to last night’s 7-4 loss to the Montreal Canadiens. The two teams now head back to New York for tomorrow night’s Game 6, with the Rangers looking to wrap up the series on home ice and earn the right to meet the Kings or Hawks for the Stanley Cup.

It’s been an inspiring run for the Rangers, who weren’t widely considered a Cup favorite when the playoffs began. The NHL is a copycat league, so there will no doubt be plenty of teams looking at New York’s success and trying to come up with a way to duplicate the blueprint.

But those teams will run into a problem: There doesn’t seem to be one.

No team is built by following just one strategy; every roster is pieced together in a variety of ways. But with most teams, there’s at least some tendency that stands out. This year’s Canadiens have been largely built through the draft. The Kings and Bruins draft well and then trade aggressively. The Red Wings specialize in finding gems late in the draft. The Maple Leafs trade well and sign horrible free-agent deals. The Oilers draft first overall.

But no such pattern stands out with the Rangers. A look down their roster reveals key players acquired in just about every way imaginable. If there’s an overarching plan in place beyond “go out and get good players,” it’s well hidden. And needless to say, whatever they’re doing is working.

It wasn’t always this way. For years, the Rangers were the poster child for the NHL’s big spenders, throwing dollars at the biggest free agents and using their wealth to pluck aging stars out of smaller markets in trades. And as we’ll see, they still do those things. But their ability to flex their financial muscles has been limited by the salary cap, and they’ve responded with a more balanced approach that’s landed them one win from a spot in the Stanley Cup final.

As an example, let’s look through six of the key players on this year’s Rangers, and the very different ways they were acquired.

Martin St. Louis heads into Game 6 as the Rangers’ leading postseason scorer. That’s not bad for a guy who wasn’t even on the team three months ago, and likely wouldn’t have wound up in New York at all if Lightning GM Steve Yzerman hadn’t left him off the initial Canadian Olympic roster. That move was reportedly the final straw that led to St. Louis requesting a trade — and then using his no-trade clause to specify New York as his desired destination.

Despite the circumstances, the former MVP didn’t come cheap. The Lightning did a good job of extracting value, including then–Rangers captain Ryan Callahan and two first-round picks. But it was an example of the Rangers doing something they’ve specialized in over the years: identifying another team’s star player who wants out, and then moving aggressively to make sure he ended up landing in New York.

It worked for guys like Eric Lindros, Jaromir Jagr, and (going even further back) Mark Messier. And it also worked for current Rangers winger Rick Nash, who came over from Columbus in a 2012 deal under somewhat similar circumstances.

No NHL team has been as active as the Glen Sather–era Rangers when it comes to spending big money on free agents. The sheer volume of names is impressive: Bobby Holik, Scott Gomez, Chris Drury, Darius Kasparaitis, Wade Redden … whenever there was an offseason bidding war, the Rangers were right in the middle of it. And they usually won.

That held true again in the summer of 2011, when the free-agent class basically consisted of just one major name: Brad Richards, the former Lightning and Stars center who’d been about a point-per-game player over recent years. The Rangers were widely assumed to be the front-runners, and they got their man, thanks to a nine-year, $58.5 million offer.

The deal was a throwback to the team’s big-spending ways, but with a modern wrinkle — it was heavily front-loaded, with several low-salary years tacked on to the end to keep the cap hit low. Given that Richards was already on the backside of his career at 31 years old, it seemed like the Rangers were gambling on a few good years up front to offset the contract’s later seasons (and maybe also banking on a wink-nudge agreement that Richards would retire midway through the deal).

So far, Richards has largely lived up to expectations. His 0.72 points-per-game with the Rangers is down from his career average, but still in borderline first-line territory. But he struggled in last year’s playoffs and was scratched by then-coach John Tortorella in a move that made headlines and led to suspicion the Rangers would make him a buyout casualty. That didn’t happen, and so far Richards has put up 11 points through three rounds while centering the team’s most productive line.

The Rangers may still decide to use a compliance buyout on Richards this summer. If so, he’ll be in good company — of the big free agents mentioned above, Redden, Drury, and Holik were all eventually bought out in New York, and Kasparaitis was waived. New York Rangers free-agent signings have had occasional success, but they just never seem to end well.

Well, except for Scott Gomez. That one worked out OK.

Sorry, Habs fans. We have to talk about it.

When New York signed Gomez to a seven-year, $51.5 million deal in 2007, it was easy to be skeptical just based on the Rangers’ track record alone. But Gomez was a well-respected player, posting solid offensive numbers and playing a reliable defensive game. He had two Cup rings from his time in New Jersey, and the Rangers were stealing him away from a divisional rival. After the first two years of the deal, though, some of the luster had worn off. Gomez had been fine, but at a $7 million–plus cap hit, his name was starting to crop up in the dreaded “worst contracts” discussions.

And that’s when the Canadiens stepped in, making an inexplicable deal to acquire Gomez that will go down as one of the worst in recent league history. In fairness, Montreal needed a center and had the cap room to make the move, and Gomez was still reasonably productive. With five years left on his deal, taking a chance on him was risky, but not indefensible. If the Canadiens were simply sending a few spare parts to New York in exchange for taking on what was left of Gomez’s deal, the move would have made some sense.

But instead, they negotiated a seven-player deal that cost them McDonagh, a former first-round pick and one of the team’s best prospects. By now, you know how that turned out. Gomez had one decent year in Montreal, and then hit an extended slump that at one point saw him go a full calendar year between goals. The Canadiens bought him out last year.

Meanwhile, McDonagh was a Ranger regular by 2010 and has established himself as one of the league’s best young defensemen.

Conventional wisdom says today’s contenders need to be built largely through the draft, especially with blue-chip prospects obtained with high draft picks that often come from years of losing. A quick look through the list of recent Cup winners supports that theory — each of the last five champions, and 16 of the last 18, have featured at least one player the team drafted with a top-three choice.

But the Rangers apparently missed that memo, because their roster is remarkably short on their own first-round picks. Their recent draft history is littered with first-round busts like Hugh Jessiman, Bob Sanguinetti, and Pavel Brendl (plus one tragedy in Alexei Cherepanov). That’s left them with only three players on the current roster who were Rangers first-round picks: Kreider, Marc Staal, and J.T. Miller.

But while none of those players is a franchise-defining pick like Jonathan Toews or Drew Doughty, all three have contributed. Staal is a dependable defensive presence who logs 20 minutes a night, while the 21-year-old Miller has chipped in when called upon as a roster fill-in.

Meanwhile, the speedy Kreider missed the first 10 games of the postseason with a hand injury, but has been a steady contributor since returning. He’s had a pair if multipoint games and put up four points in the Montreal series. And of course, Habs fans will point to his collision with Carey Price as a defining moment in the series.

While the Rangers’ success rate with first-round picks has been underwhelming, they struck gold in the late rounds of the 2000 draft. That’s when they used the 205th pick on Lundqvist, a relatively unheralded Swedish goaltender. In a draft that featured NHL busts like Mathieu Chouinard, Brent Krahn, and first-overall pick Rick DiPietro, a total of 21 goalies had their names called before Lundqvist did.

He wasn’t the first goaltender picked by the Rangers — that honor went to Brandon Snee, who never made it past the ECHL. And he didn’t even manage to be the first member of his own family taken — that was his twin brother, Joel, a forward picked by the Stars in the third round.

Lundqvist didn’t make his NHL debut until five years after he was drafted, but he established himself as an elite goaltender almost immediately. He finished in the Vezina voting in each of his first three seasons and finally won the award in 2012. He seems likely to be remembered as the top goaltender in Rangers franchise history.

So did the Rangers know something the rest of the league didn’t know, or did they just get lucky? It’s tempting to lean toward the latter option, although I suspect that somewhere, there’s a scout who’ll tell you different. And Lundqvist isn’t the only late-round home run on the current roster — winger Carl Hagelin was the 168th-overall pick in the 2007 draft.

Lundqvist may have had to wait around all day, but at least he got his name called. Not so for Rangers’ alternate captain Dan Girardi, who went undrafted in 2003 and eventually signed as a free agent with the Rangers’ AHL affiliate.

He’s gone on to become a top-pairing mainstay in New York. In 2011-12, he made the All-Star team while leading the league in minutes, and has been a steady defensive presence over the course of an NHL career that’s now in its eighth season. Not bad for a guy every team in the league passed on. Girardi has some company as a key Ranger who went undrafted — forward Mats Zuccarello, who led the team in regular-season scoring, was also passed over. He didn’t even sign an NHL deal until he was 22.

So there you go, NHL general managers. That’s the Rangers’ plan. Trade aggressively, gamble on free agents (even if you eventually have to buy them out), and skip the whole “blue-chip first-rounder” thing, as long as you can find a few hidden gems in the late rounds and beyond.

Throw in a few under-the-radar trade pickups like Anton Stralman and Benoit Pouliot, a cheaper free agent or two like Dominic Moore, and the occasional solid draft pick like second-rounder Derek Stepan, and you’re all set.

Oh, and take another team to the cleaners for their best young defenseman. Preferably the team you end up playing in the conference finals. That seems to help, too.