How Can the Bengals Move on From Andy Dalton? 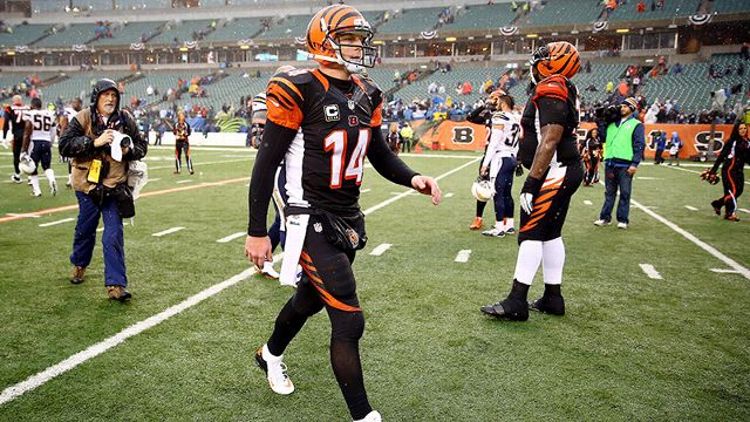 The Bengals have an Andy Dalton problem, and it’s not all Dalton’s fault. Twitter probably isn’t the best resource for deciding on the future of a starting quarterback, but the reaction to every misstep Dalton made Sunday said a lot about where Cincinnati stands — both with its quarterback and as an organization. A day earlier, Andrew Luck threw three interceptions in his comeback win against the Chiefs, each of which could have cost the Colts a playoff win. It was the same number of turnovers Dalton coughed up against the Chargers. The difference was that every Dalton screwup was met with the same chorus. Oh, Andy Dalton …

To some extent, this is all a matter of perception. Any misstep from Luck is going to be seen as a somehow necessary step in the grand plan of Football Jesus. Dalton’s are going to be seen as the mishaps of a middling quarterback holding back a championship roster. Especially for fans in Cincinnati, patience with Dalton has almost run out. As Bill Barnwell wrote yesterday, “There are people out there who believe that Dalton might very well be Cincinnati’s franchise quarterback. There are others who don’t. It’s really hard, though, to imagine that anybody is sure he’s the man in Cincinnati.” Dalton’s contract is set to expire after next season, and if he isn’t the man for the Bengals, it’s about time to figure out a plan to determine who might be. The question is what that plan might look like.

Let’s start with the classic quick fix: free agency. Any fan knows the familiar routine of finding their team’s holes and queuing up the “2014 free agents” search in Google, but rarely is that ever a viable option — especially at quarterback. Jay Cutler’s contract is the last bit of proof that any team with at least a reliable solution in place is going to lock that player up long term. Josh McCown and Michael Vick aren’t the future in Cincinnati, and this year’s class is so devoid of options that even creating competition through free agency seems unlikely.

Spend a Midround Pick on a Project Quarterback

It’s easy to say that the Bengals should look for a “Nick Foles–type” option in the draft, but really, they should. Foles was a third-round pick with great college productivity and some lingering questions about how parts of his game would translate in the NFL. Foles’s success had a lot to do with Chip Kelly and the help around him, but Jay Gruden is a pretty respected playcaller in his own right, and few quarterbacks would have more to work with on offense than whoever is under center for the Bengals.

Players with similar billing to Foles are available in the third or fourth round every year. Someone like San Jose State’s David Fales or Clemson’s Tajh Boyd could be that answer. Ideally, this would work out just as it did with the Eagles and Foles. After a year of acclimation, Boyd/Fales would be ready to step in and possibly start if the Bengals choose to move on from Dalton next spring. Realistically, it would give the Bengals an option at backup quarterback, both if Dalton earns a new contract by taking the Bengals on a deep run next year, or if Cincy takes a quarterback early next year.

Trade for a Current NFL Quarterback

Sticking with Foles for a minute, one option that might have seemed somewhat believable before yesterday is the Bengals actually giving Philadelphia a call and seeing what it might take to pry Foles from the Eagles. If Cincinnati would be willing to give up its first-round pick, that would leave the Eagles with two in this year’s draft and the ability to move up and grab a quarterback whom Kelly sees as a better fit for his ideal system (Johnny Manziel, maybe). But with Kelly coming out yesterday and saying that Foles is his guy, that leaves the trade-option landscape a little more barren.

Ryan Mallett and Kirk Cousins are always the popular names in this game, but if the asking price from New England or Washington is any more than the third- or fourth-round pick, respectively, that was originally spent on those two, going with a homegrown midround quarterback might be the smarter option.

Look for an Immediate Starter in This Year’s Draft

There seem to be two possible ways to go about this. One is less fun, so let’s start there. The Bengals have the 24th pick in the first round, and with that, there’s a chance that a couple of the borderline first-round prospects might still be on the board. It being early January, guessing where players are likely to fall in May is still a bit tough, but someone like Derek Carr or Zach Mettenberger could possibly still be on the board when the draft gets into the 20s. That solution is pretty straightforward. If they thought a player like Boyd or Fales would be a better option than Dalton, spending a first-round pick on either one wouldn’t leave the Bengals with a ton of glaring needs elsewhere.

The current construction of the Bengals’ roster is what makes the second option — the very fun one — more of a possibility for them than it might be for most other teams. Right now, the franchise is in the enviable position of having a team without many noticeable holes. On offense, aside from quarterback, Cincinnati is set. The Bengals might have the best offensive line in football. Their tackles, Andrew Whitworth and Andre Smith, are already locked up, and their guards are a very good pair on rookie contracts. We know about A.J. Green and Giovani Bernard, and it looks like Marvin Jones is developing into a very nice complementary piece to go along with them.

Surprisingly, given the team’s identity, defense is where there are more questions. With all their injuries on that side this year, it feels like defensive coordinator Mike Zimmer and Marvin Lewis can make it work with anyone, but at a certain point, a larger talent base would be nice. The Bengals don’t have a ton of cap space to work with (without making any moves, they’d have about $20 million going into the offseason), and there are some questions at defensive end and with their linebacker depth. Michael Johnson, who played this year on the franchise tag, is probably gone after turning down an extension last offseason and earning himself what’s probably going to be a nice deal elsewhere.

If Cincinnati were to stay at no. 24 in the first round, a replacement for Johnson would be the logical move. But there’s a chance that the Bengals have enough defensive talent currently on their roster to piece that replacement together. If they think Carlos Dunlap and Geno Atkins are enough up front, that would give Cincinnati some flexibility with that first-round pick. And maybe, just maybe, the Bengals would be a candidate for the type of trade the Falcons pulled off for Julio Jones or Washington made for Robert Griffin III.

The Rams have made it known that they would be open to trading the second overall pick (with Chris Long and Robert Quinn in place, Jadeveon Clowney is less desirable to them than he is to most teams), and the price would probably be a similar one to what Washington paid for Griffin: this year’s first-round pick, two additional first-rounders, and a second-rounder. Washington’s pick in 2012 was sixth overall, so there’s a chance that St. Louis would want a bit more to move all the way down to no. 24. It’s hard to imagine the Texans not using the first overall pick on a quarterback, but with how the draft seems to be shaking out right now, either Blake Bortles or Teddy Bridgewater might be worthy of going second.

In this scenario, Dalton would probably get shipped to a team willing to take a chance on a quarterback, and the Bengals might be able to squeeze an Alex Smith–type price out of someone. That might help, but it wouldn’t be the deciding factor.

The key here isn’t that the Bengals should do this type of deal or that it’s likely; it’s that with the way Cincinnati has built its roster, it’s in a position to have the choice. Its status as one of the league’s most complete teams is why conversations about Dalton have begun at all. Lewis and his staff have done a remarkable job of assembling and developing talent. This is a Super Bowl–caliber roster led by a very good head coach and two coordinators that many think are in line for a chance at their own head-coaching jobs. The problem is that without the quarterback to make it all go, none of that may matter. If Lewis and his staff stick with Dalton — which at least publicly, he has said he will — next year might be their last in Cincinnati.